I looked out of the window the other day, and what do I see, but the sheep on the back lawn.  When we had a few sheep she had a bit more of a name, either the fat ewe or the young ewe.  Well now she is the only ewe, so she is just 'the sheep' or 'the ewe'.  We have a little gate that goes into her field that is on a springy hinge, put in way back when so that when we were carrying an arm load of hay, we didn't have to struggle to open a gate.  Over the years, some of the sheep figured out how to open that gate by getting their top lip behind the edge and pulling it towards them and then barging through.  I think the hinges have got weaker/rustier over the years and don't spring the gate shut as fast or as strong.  Anyway, it is all fine, if the sheep doesn't think there is enough food in her field, she can let herself out, go along the back of the barn and around the corner, and depending which gates are open, has a choice of other spots to eat.  It's pretty darn handy for the most part.  The only negative part is that we MUST REMEMBER to make sure that the gate that would let her onto the back lawn from the alleyway, is closed.  And sometimes, we forget. 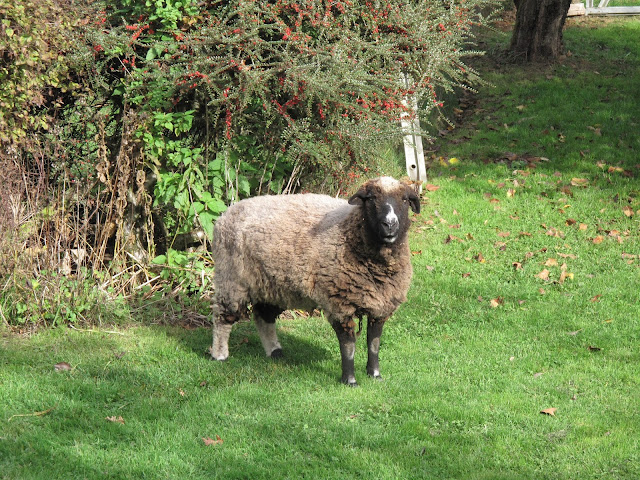 Luna came out with me and virtually slithered down the steps from the deck and across the lawn to get to her.  It's so hard to capture her intensity with the camera, because generally she doesn't get down low, although she sure was going down the stairs. 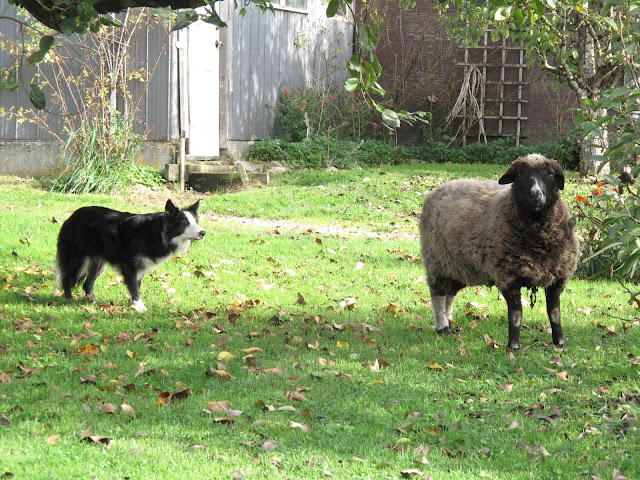 The sheep came over to me, maybe I had an apple? 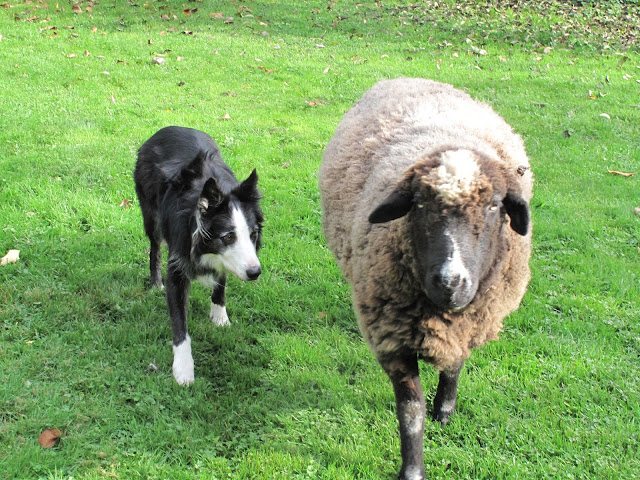 No I didn't.
There is a patch of collards and kale at the top of the driveway near that open gate, that she would always help herself to when she got out.  It had a bit of a fence around it to keep the dogs out, but it certainly wasn't sheep proof.  A while back I finally beefed up the fencing, thinking that if the sheep got out again, at least she couldn't get at the greens, because she's helped herself a few times over the summer.  So I was feeling all smug when I walked over to check on it, and low and behold if the sheep hadn't pushed underneath my netting and got in there and eaten a few bunches of collards, and this time some of  the kale as well. Sorry veggie customers! Then she had crossed the driveway to where I had cleared out the garden where the salad greens had been growing, and there had been one volunteer chard plant that was looking really healthy that I had left.  She had eaten that off too, as well as an unusual looking lettuce growing next to it.
Frustrating, although, yes, it is our own fault.

Luna, quit looking like a bird dog and give her a nip for me! 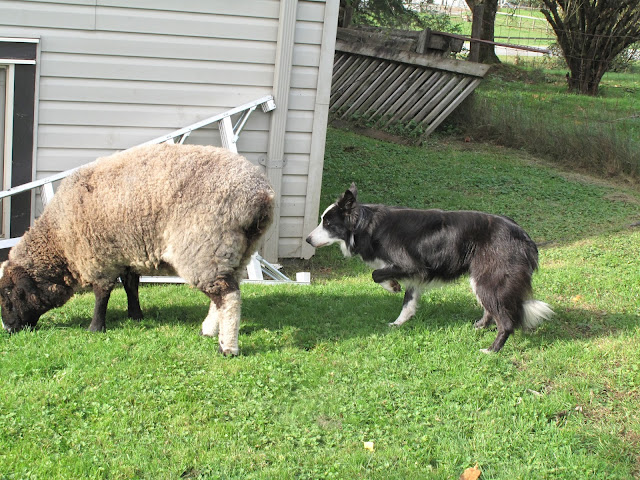