Last week we were on holiday.  I did not make a single batch of jam.  I could get used to that!  Of course we went to Oliver.  When we are at Oliver, we spend a lot of time on the dykes.  Mostly walking the dogs there, because they can be off leash once we are out of the town boundaries, and it's easy for Calli to get around because it's flat.  I really love the views when we walk to the south of town.
A taste of Tuscany don't you think? (not that I've ever been to Tuscany, but it's the Lombardy Poplars....)

See the two hills directly behind the orchards and vineyards.  They were burned by the Testalinden Fire this summer.  That patch of trees in the center in the little valley between the two hills is where Testalinden Creek flows down into the valley.  In 2010,  the dam on a small lake that served as a reservoir many years ago up in the mountains, failed.  Most of the lake emptied in a hurry, and water and mud roared down the creek. 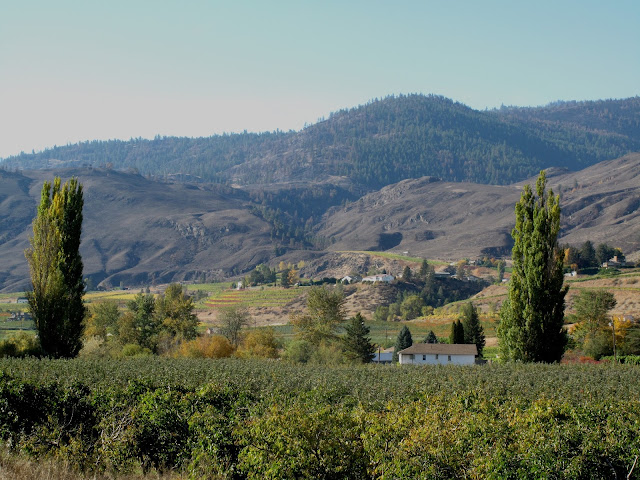 You can see the debris fan in this picture from Google Maps.  When we first started hanging out in Oliver in 2012, it was really obvious when we drove through that area on the highway, but now you would hardly notice.   Nature is well on her way to restoring life back to the land. Testalinden Creek is just a mere trickle.

Nature will also gradually restore life to these burnt hills.  They were mostly grass and shrubs.  Some of the trees will survive, and some will not. Come Spring, I'm betting there will be a blush of green once again over most of the hillside. 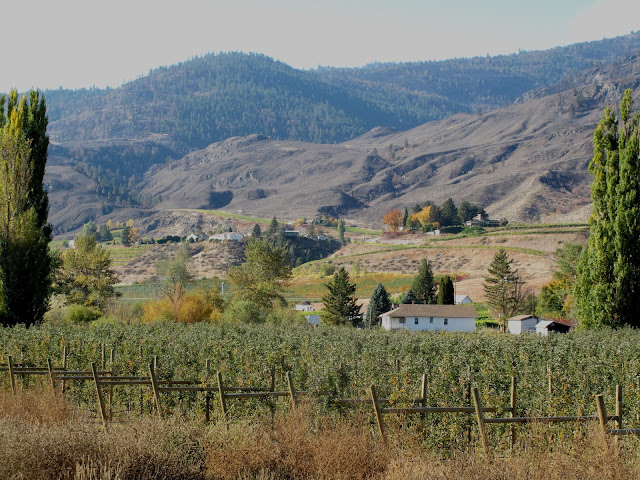 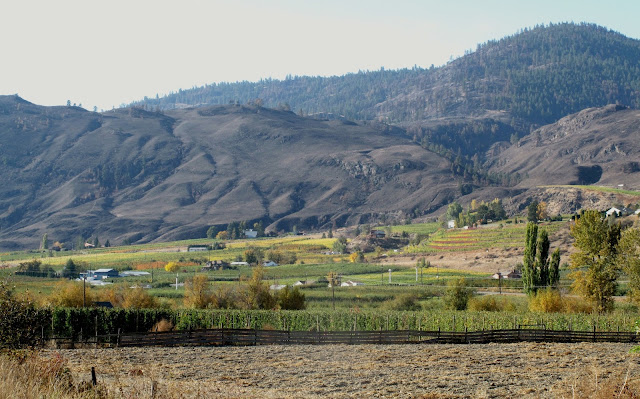 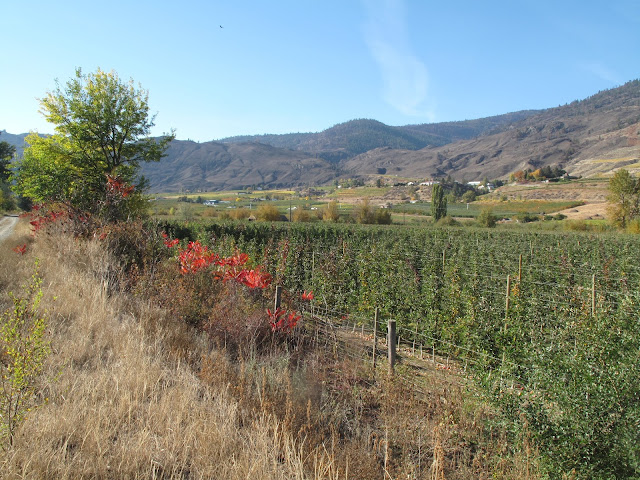 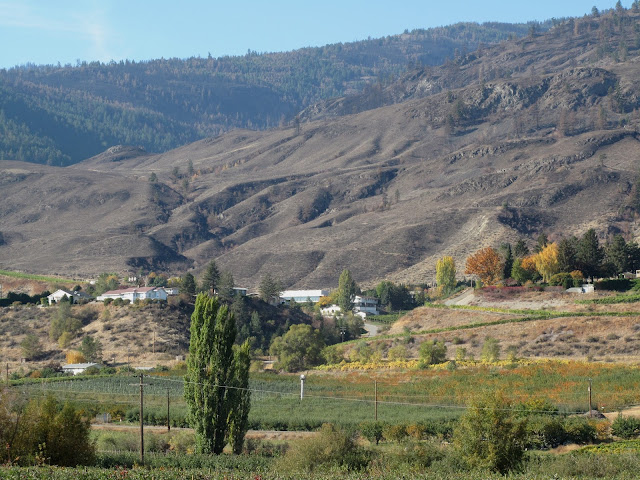 When we go out for these walks, I'm always on the lookout for 'stuff'.  Mostly edible 'stuff'.  I might not be a hunter, but I certainly am a gatherer.  I found this massive grape vine a few years ago.  Grapes gone wild, growing all over a fence line between an orchard and the dyke.  This year I thought someone else had beaten me to the grapes.  In September we walked down there and I couldn't see a thing.  What I didn't realize was that the grapes were all hidden under the mass of leaves, although surely I must have looked?, but obviously not well enough.   Anyway, thought I was S.O.O.L. this year.  Imagine my surprise last week to walk down there and see grapes, because all the leaves had died and dropped off.  Now the birds had beat me to a lot of them, but I still managed to pick a enough to stretch my arms an inch or two on the long walk back. 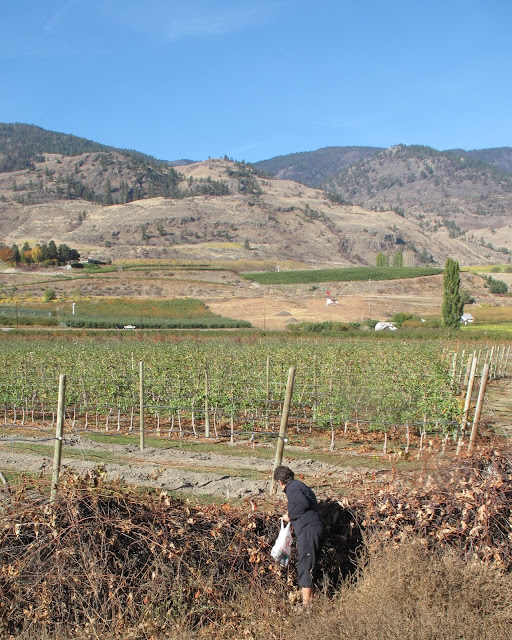 Calli had her own burden, she carried a rock most of the way. 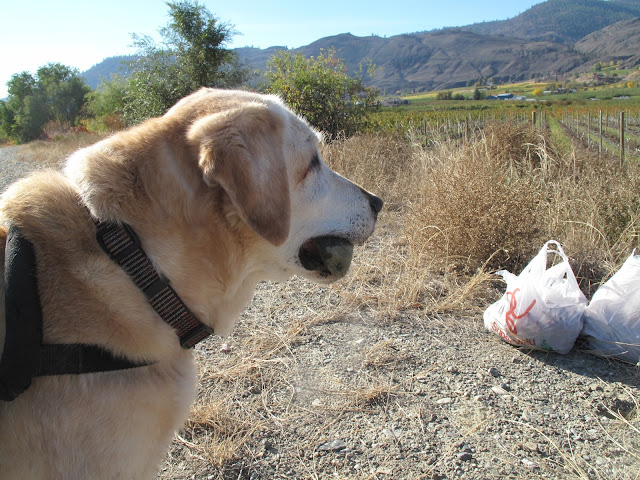 Late one afternoon, we headed off on a bike ride, sans dogs, down that same dyke.  The dyke on one side of the river is paved for quite a few miles north and south of town.  The other side is mostly gravel, but they did pave this stretch this Spring.  I wasn't happy about that, I like it au naturel better, but it does now make a paved loop, what with the two easy access pedestrian crossings of the river, for those that wouldn't be able to travel on the dyke otherwise. 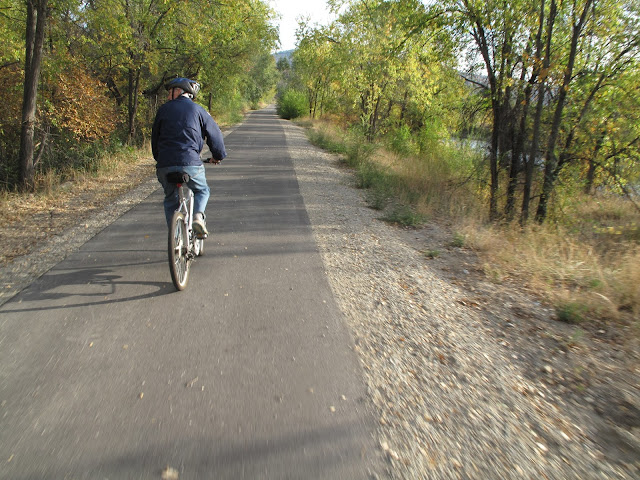 We were on the East side, and before long we were off the pavement.  We walk the dogs on this stretch a lot. 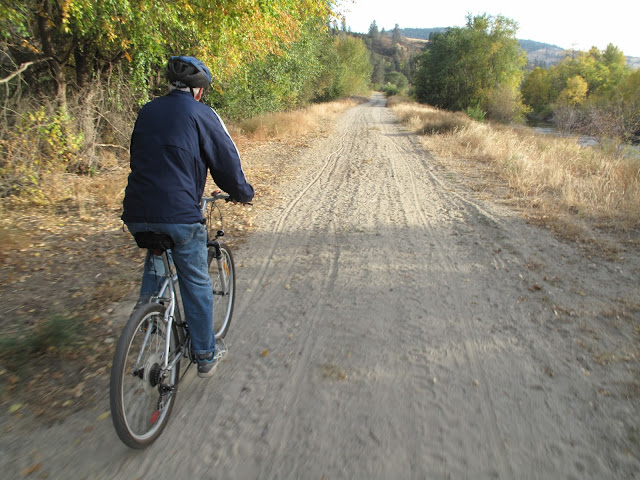 Further south, the dyke becomes a gravel road for a bit, so we ride on bench between the actual top of the dyke, and the river.  It's quite shaded along this stretch, and we'll walk the dogs here in the summer because it's cooler.  There is a good swimming spot for them along here too. 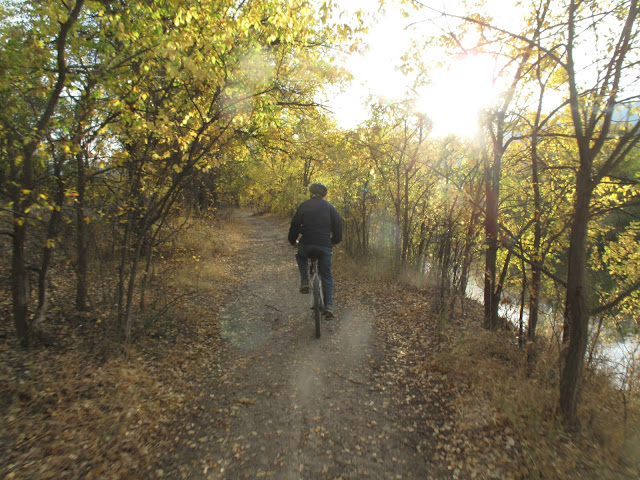 It was very pretty through there as the sun was about to drop behind the mountain. 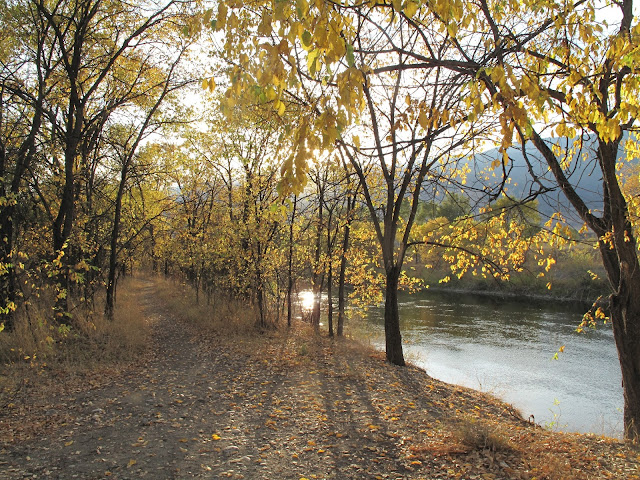 Then we crossed the river at No. 9 Rd and headed back north on the paved side, toward town.  It's at this point we start to think that we should have made the ride shorter, and how sore our butts are, and how it is getting quite cool now and don't I wish I had brought some extra clothes. 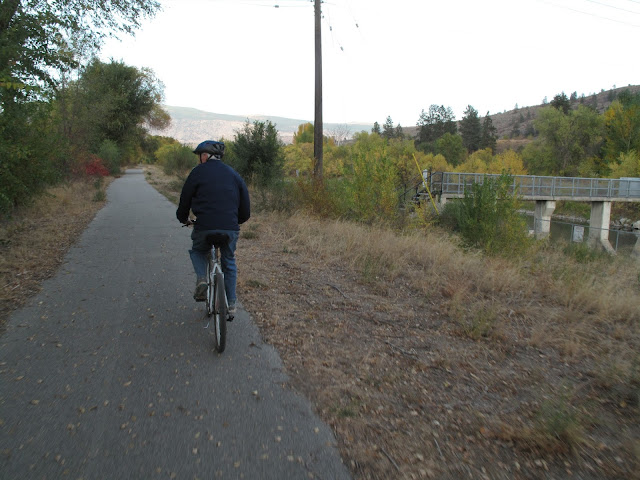 I hope you were truly impressed by my mad bike riding skillz, riding with one hand, managing to focus the camera and take pictures, and not fall off!