This WAS going to be part of yesterday's post, but I did remember saying that I was trying to do more, shorter posts, so why not save the next part for another post, which is what this is.
Well I'm proud to say that I did get all the pumpkins cooked and into the freezer.  The easiest way to do that was to cut the pumpkins in half, and after the first one or two I started cutting them horizontally instead of vertically.  I think the seeds and fibrousy stuff in the middle were easier to get out that way.  I didn't worry about getting all those loose fibres out, after all they are pumpkin, and I was going to puree it all anyway, so it didn't matter.  Then I just put them straight onto the oven racks cut side up, so any juices stayed in the pumpkin, and I cooked them until they were done, an hour or so at 350 degrees. 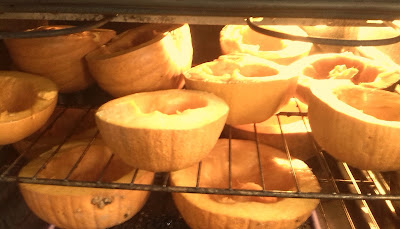 Then I scraped the halves out into my biggest measuring cup,  used a 'stick' or immersion blender and pureed it all, and then put porridge recipe portions into glass and plastic containers and popped them into the freezer. 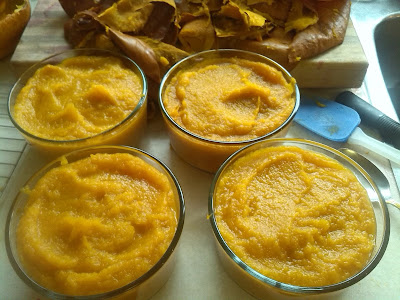 At some point I'll take them out, turn them upside down and run some warm water over the container, pop the frozen lump out and fill up some bags with them.  And if you don't want to go to all that trouble for the sake of saving a few dollars, and to get some organic pumpkin, various grocery stores have had the canned pumpkin on sale just lately for $2.50 a can:)  I've bought lots of those too, we have pumpkin porridge several times a week.  It's made with pumpkin, water, nut butter, raisins, coconut, cinnamon, vanilla and salt.  That is what we take for breakfast when we are at the farmers market.  It's nice cold too.  We never have time to eat before we go, and usually don't get chance when we are there, to eat the porridge until 11am or later.

So this week has been, and still is, a heavy jam making week.  This is what my jam display looked like towards the end of the market last Sunday. 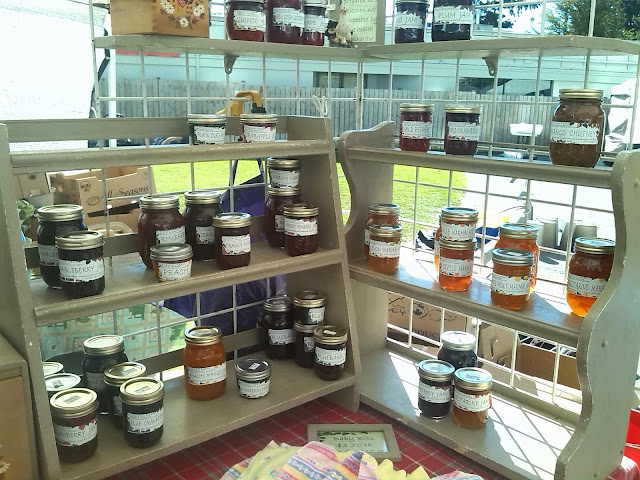 We usually start out the day with this relatively full.  It would have had nearly 80 jars on it, and 30-36 different flavours.  In the utility trailer behind there would be another 10-12 boxes of jam, each holding a dozen jars.  At this point there were only three boxes of jam left in the trailer.  After the market I was able to restock about 3 or 4 boxes worth of jam from inventory I had at home, but the rest of it had to be made this week. Yep, I am just sooo done with jam making at this point.  Anyway, I'm trying to go into the last big weekend of the market season well stocked.  At least I will be for the Saturday market, they will get first pick.  But the weather is supposed to be rain, and maybe wind on Saturday, so we know what happens to some of the customers on those kind of days.  Both markets continue on until just before Christmas.  I'm down for going to every White Rock one on Sundays.  I'm not sure yet how often I'll be at Abbotsford.

The hens have had a feast of squash innards this week, and the leftover pulp and seeds after juicing blackberries, raspberries and crabapples for jelly.  I saved most of the pumpkin seeds because I have great plans for roasting them.  We'll see how that goes.

And as for our local wildlife, the cougar was chased off a property a couple of miles east of us a few days ago.  Last week we found bear sign on our trail.  The next day Larry stepped in that 'sign'.  While he was cleaning off his boot, and I was further ahead on the trail,  he decided to make a 'cougar pile'.  By the next day, he had forgotten about it, but I spotted it and called him over to look.
He confessed that he was the cougar:)
Posted by Karen at 8:55 PM