When we head to Oliver, we take up a load of stuff that has been added to the Oliver List since the last time we were there.  When we are there, we have two lists going.  One of things to bring back home with us, and another of things to that we need to take there the next time.  Quite often I've accumulated a few things from my thrift store visits.  So I picked up this fake vintage, made in China, little holder thingy.  50 cents. Couldn't really think of a use for it, but it was cute, so I had to get it:)  Eventually it ended up under the kitchen window, and right above the back splash behind the sink.  It matches well with the old original arborite counter top, which in a lot of places has come unglued from the wood underneath it.

This trip we finally had room in the truck to take up a compost bin.  Something I'd picked up for free off Craigslist.  Turned out it was someone I knew that was wanting to get rid of it.  I can't remember life without composting, and had been feeling bad about just throwing the vegetable trimmings etc. in the garbage.  I feel much better now that we have somewhere to put them.  Jake kindly peed on it:(

We also managed to fit a step ladder in the truck too.  So wouldn't you know it, the day after we got there, we came across a garage sale.  There was a nice wood step ladder for $10, sturdier than our aluminum one.  Larry made a comment about it being sturdy.  When Larry comments on something like that, I'm assuming he's interested.  I asked him if he was.  He wouldn't commit.  There was a sign posted that said No Reasonable Offer Refused.  I offered $5.  The lady countered with $7.50.  I countered with $6.  She dithered on it and the finally agreed.  In the end I only had $5.75 in my pocket, which she accepted.  Then we got into a long discussion about border collies since they had one there, and making your own treats, since I was giving the dog some dried liver bits from my pocket.  I told her how easy it was to make them.  She said that info was worth selling the step ladder so cheaply.
They were moving to Belize, taking their dog and their cat.
We brought the aluminum ladder back home again.

The day that we leave involves cleaning up, which includes doing laundry.   When I was hanging sheets on this umbrella clothes line I was thinking how much I would have loved this as a kid.  Four sheets pegged around it, and you have an instant fort!  Jake liked the shade it provided.  I made sure my underwear was hidden in the middle:)
We did finally meet the lady that lives behind us, and she has two dogs.
Those pieces of cedar lattice to the right of the sheet, we found those on someone's free pile.  They'll be handy to make a little fence around the vegetable garden.  We also got a heavy duty plywood storage cupboard for the shed from a free pile just down the road.  I've always got my eyes peeled for a bargain!

In the Fall I planted 50 daffodils at the front of the house.  They were just starting to bloom.  It's fun to see what plants are already there.  There are lots of Wallflowers, which make me think of England (where I was born).  I think it's the smell.
Got the gardens cleaned up, which was pretty easy compared to what I have to tackle here, and was able to put the dead stuff in the compost bin:)

Calli travels in the back of the truck in this crate.  You'd think she would be glad to be out of it, but no, it was her favourite place to sleep.  A couple of times now Larry has taken it out of the truck when we are unloading, and then a bit later bent down to pick it up, and just about wrenched his back because Calli has got back into it, unnoticed.  We left it on the back porch, and it was her preferred place to snooze during the day.

One of the many vineyards in the area.  Oliver calls itself the wine capital of Canada.  This is Burrowing Owl Winery.  We took a tour through it a few years ago.

The sign on the gate to this field said 'Wildlife Management Area'.  Couldn't figure that one out.

Last walk on the dyke on our way home.  This is close to Osoyoos Lake.  You can't tell by the photo, but the bench below the top of the dyke, right behind Luna, drops sharply into the river.  Calli, despite being told to stay, either really is deaf, or chose to ignore us, and went down it anyway for a swim.  Of course then she couldn't get back up, so we had a struggle to stop ourselves from falling in while we pushed and pulled her up the bank.  Therefore she was put back on leash.

Hope you had a Happy Eggy Easter!
Nine eggs from the new hens today:) 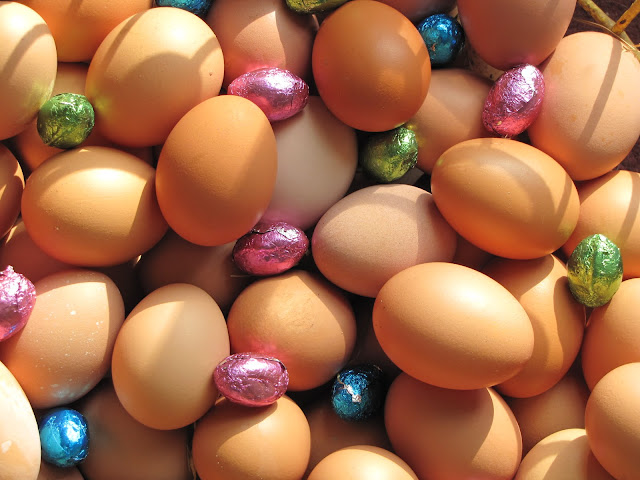