When we come back from Wyndson Cottage, we are always reminded of how much exercise Luna gets here without us having to put out any effort.  Sure, we are on ten acres here, compared to a 6000 sq.ft. lot there, but it's not like she just takes herself off around those acres and exercises herself.  But, as soon as we step outside the door, she's off and running.  Make a move toward the sheep field and she makes a big outrun to get there.  If she isn't allowed through the gate, she runs along the fence line a few times.  If she does get in the field, then she runs around the perimeter and then back up through the middle, and might repeat that a couple more times.  Out towards the chickens, she's running there too, then on to Pride.  She's moving constantly, and fast.  So without really doing much, by the time we've done the morning chores and the bush walk, she's probably already run a couple of miles.  At Oliver, we do play a bit of fetch in the backyard, but once the snow has gone, that will be limited, otherwise the grass will just be destroyed. 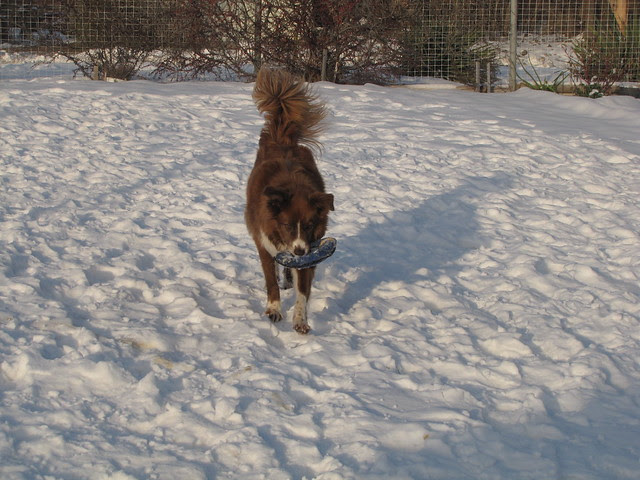 So each day we are there, we have to make a specific plan to give the dogs some exercise.  I guess city people have to do this all the time, but we aren't used to it:)  Fortunately Oliver has a good sized dog park.  It is a very large ball diamond, fully fenced, that is available as a dog off-leash as long as there isn't a ball game.  We've probably been there half a dozen times to play soccer and fetch. In the mornings it is mostly deserted, and the most we've seen is three other dogs there.  Apparently the whole park is off-leash between 6am and 9am, but we've never got there that early. This last trip we seemed to end up there at the same time as two golden retrievers, who would always steal one of the dog's balls.  No big deal, it kept them happy, we had an extra one, and the owner gave it back to us before he left.  Luna was occupied with her toy, and as long as other dogs stay out of her face, it's not a problem.  So every other day we went to the dog park, and then went for a walk somewhere else in the afternoon.

Fortunately behind the house, and every other house in the area, there is a back lane, so that makes a decent walk straight from the house.  We have to avoid a lot of pavement because Calli drags her back feet a bit. Although since most things were covered in snow this last trip, that wasn't too much of a concern.

There are also good trails alongside the river.  As soon as you are out of the town limits it is off-leash, and it doesn't take long to walk out to that point.  We did a lot of those walks too. 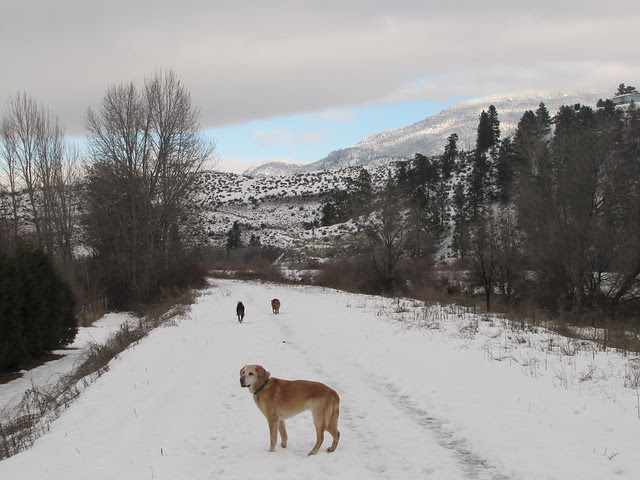 One this particular day, there was blue sky, but it never really lined up between us and the sun, until late in the afternoon, just before it went behind the mountain to the west.

Canada geesers on the river. 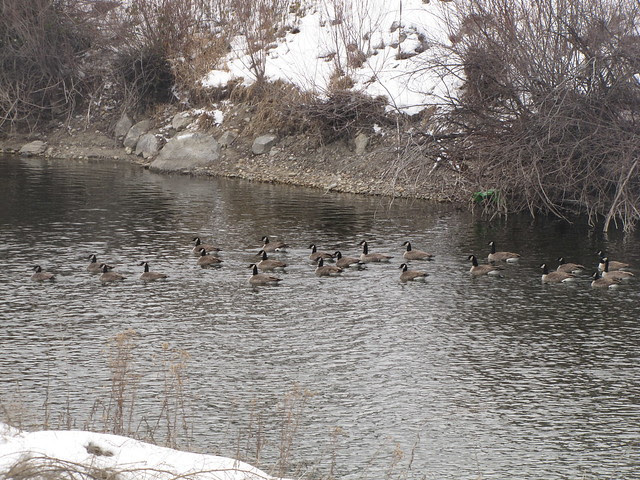 Luna loves rolling in the snow.  She is the most rollingest dog I've ever had.  And the week in Oliver is probably the cleanest she's been in a long while. 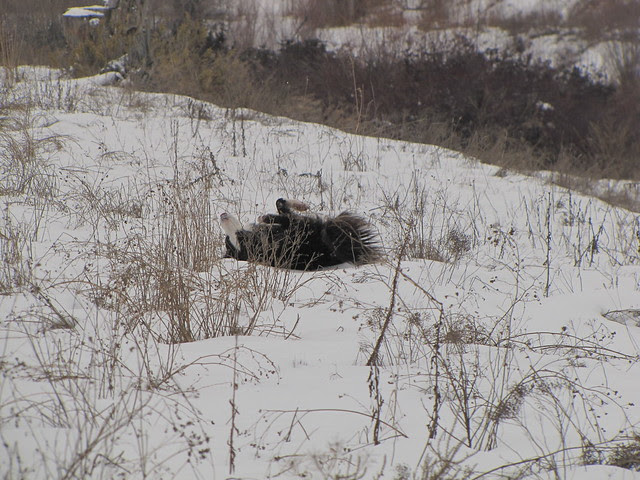 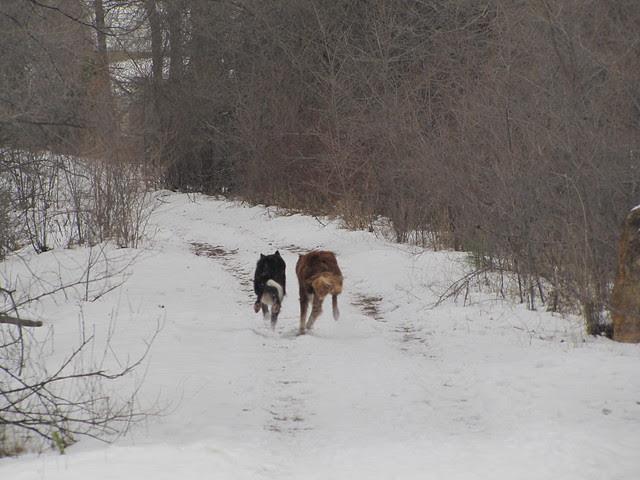 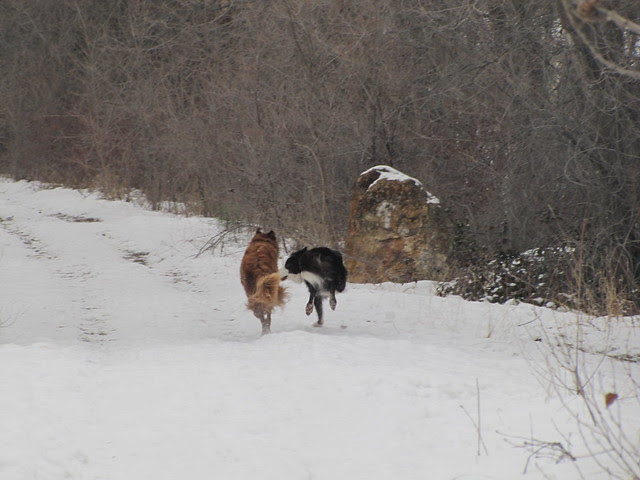 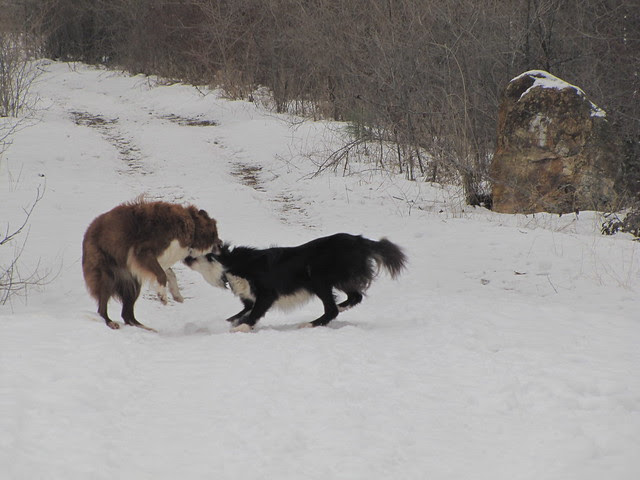 We tend to end up taking Calli too far.  Not that we notice it for the first few days, but then it starts to catch up with her.  It's hard, because of course she is always ready to go.  On this walk, on the way back, her back end started to give out.  She starts to fall over to the right.  We looped the leash around her waist and put some resistance on it to keep her back end upright, although she still had a lean happening, and she was able to make it back okay.  Unfortunately Luna found enough crap along the way to give herself the runs that evening.  Not exactly sure what the big black plops were along the trail, but Luna thought they were some sort of delicacy. It's disgusting the things she will eat.

Is that me you're talking about? 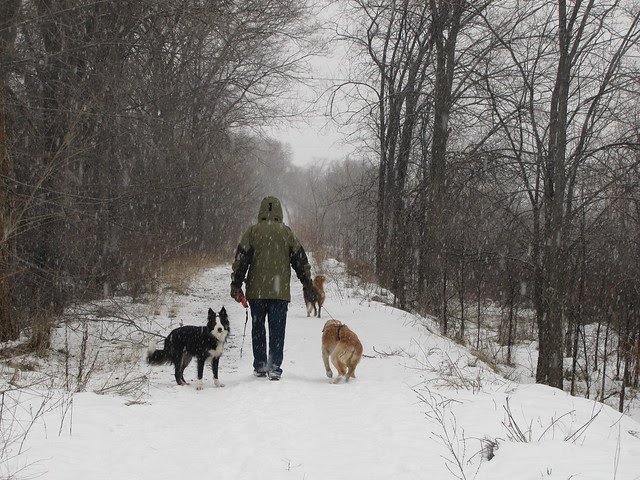 Let me come and give you a kiss! 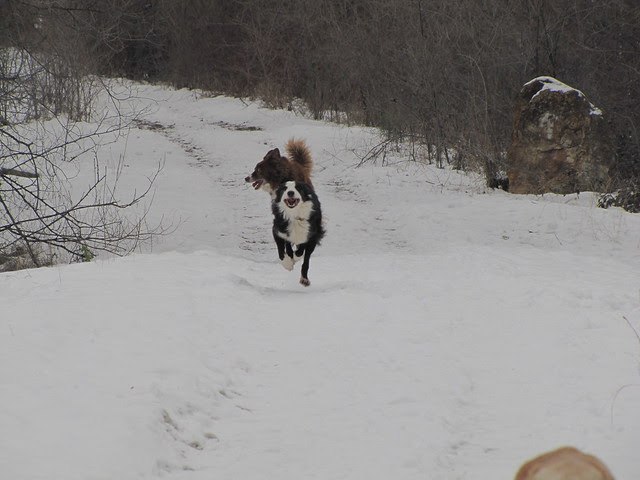