The Sun Run has come and gone.  I'm kind of sad now.  The build up over the last three months for this day's run....well we went there, did it,  got the t-shirt, and  I have one sore knee to show for it.  And if you want Meredith's input, it would be the same, except she is now hobbling along again on her sore heels (faciitis).
So here's how it all played out.
Got up at 6, showered, ate, and headed to Abbotsford to meet the bus that our running group was heading into Vancouver on.  We had a real Trucker Mama of a bus driver. (She used to drive the big rigs). She was a bit PO that she didn't know exactly where she was to drop us off, so basically she pulled over on the next street north of the starting line, and we all piled out.  The weather was cloudy, but before we got off the bus a big patch of blue sky appeared, so I did a hasty change of clothing underneath my sweatshirt to a sleeveless top.


Kind of like the girl's line-up and the boy's lineup.
We were in the boys line-up I guess, but it was much shorter:) 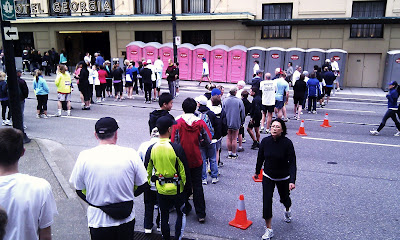 We stepped off the bus, and we were frozen.  What felt like an arctic wind was blasting up Howe Street.  First things first though, we lined up at the portapotties, and then checked out the starting area.  There weren't too many people there yet, so we set off walking.  Anything to warm us up.  I was in shorts, with an old polar fleece sweatshirt that I was going to ditch once the run started.  We ended up going in towards the skytrain station and Granville Mall, where it was warm and wind free.  I ran up and


down the stairs a few times to warm up, and we did some stretches.  About 8:40 we headed up towards the start line with another stop at the portapotties, and their even longer lineups.  Squished ourselves into our starting section on Georgia Street, and waited and waited and waited.  We were registered in the  1 - 1 1/4 hour group, and were stood near the back of the pack.  Waaaaay off in the distance we could see heads bobbing after the starting gun went at 9, and I thought that we'd be moving in no time.  Ha, the only moving we did was in place, trying to keep our legs warm and loosened up. 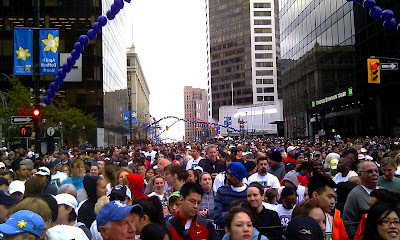 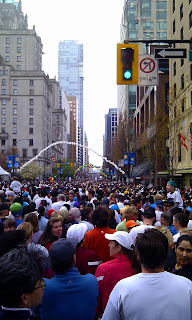 Almost at the start line 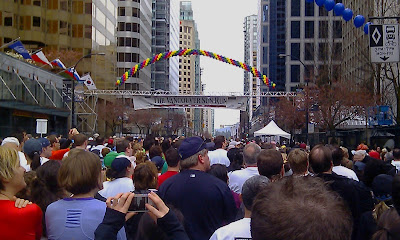 Very quickly we were running downhill, and made sure that we didn't get going too fast.  We were past the first kilometer in what seemed like no time at all.  One down, nine to go.  The course flattened out, and there were a few sharp corners which caused a bit of a bottle neck.  I think at one of them we had to sort of run in place a few seconds while everyone got round.  The walkers were supposed to stay to the right, but there were more than enough annoying ones that were walking down the running section.  One was fine, but get a few walking abreast and they created a wall.  For the most part though, in a second or two a hole was created and you could get past and keep going.  We were going a pretty decent clip for the first few kilometers, Meredith's heels were okay, but then somewhere between kilometer two and three, the pain kicked in.  We kept going, probably not as fast as we could on a good day.  Just before the five kilometer mark we hit the steepest hill on the route.  Meredith thought she was going to have to walk it, but she managed to make it up.  There was a bit of flat, and then over the Burrard Street Bridge.  We were past the halfway mark, and I felt pretty decent.  Meredith was feeling worse though.  Her heels had ramped up a few more notches on the pain scale.  She was starting to struggle, and around 7 1/2 kilometers she said she was going to have to walk, and she told me to go ahead.
And like the kind, caring, concerned mother I am.....I ran off and left her:)

Between 8 and 9 kilometers,getting close to the Cambie Street bridge, looking forwards and backwards.  Runners and walkers as far as the eye can see 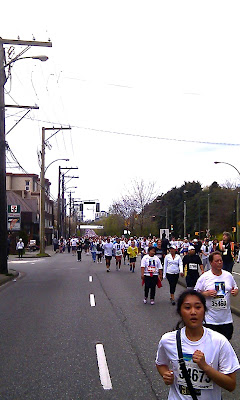 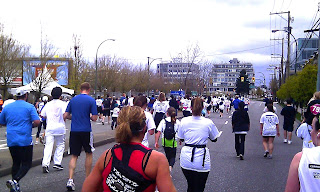 I picked up the pace a bit, it was mostly flat, there was a rockin' band playing under the Cambie Street bridge.  I even had enough energy left to put my hands over my head and clap along with them.  Up the ramp to the bridge, then there was a long stretch of mostly flat.  I picked up the pace a bit, the finish line was getting close.  Once I hit the downhill coming off the bridge, I really picked up the pace some more.  Now I really felt like a runner.  I was passing quite a few people, and I managed to keep that pace up to the finish line.  I felt awesome at that point...probably mostly because it was over:).

The finish line, next to B.C. Place 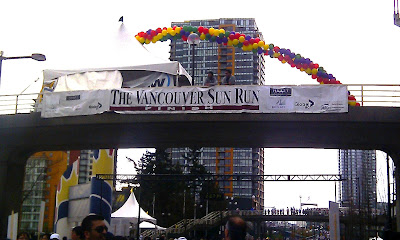 I found the end of the fence and got around it and walked back towards the finish line.  I had no idea how far behind me Meredith was going to be.  Thank goodness she was wearing a bright blue shirt, and not one of the ubiquitous Sun Run shirts, as it made it a lot easier to pick her out of the crowd.
Poor girl, she had to hobble the last 2 1/2 kilometers.  She couldn't even walk fast.  She had a lady ask her if she needed a bandaid (she thought Meredith must have a blister).  She managed to run the last 20 feet or so across the finish line.  I finished in 1:07:17.  Meredith finished in 1:22:  Not quite as fast as I was hoping to do it, but I did keep running for that whole time.

Afterwards we trooped into B.C Place stadium, where we were offered juice, water, bagels, oranges and  bananas, and Power Bar products.  Some of the lineups were incredibly long, so we skipped those.


In the stadium.  The crowds had thinned a lot by the time this was taken 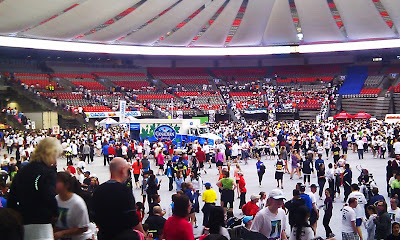 Leaving the stadium to walk to the bus, I just about froze .  Here I am modelling the latest in runners gear, the garbage bag.  I had that packed  in  the pocket of my water bottle belt, in case we had to wait for the start of the run in the rain. 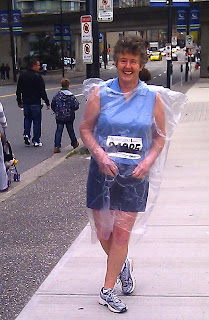 Back on the bus by 12:30, and home just before 2.  Trucker Mama bus driver dropped us off at the fairgrounds where we had started.  The only thing was the parking lot was packed, as the Flea Market was in full swing.  She took us down a narrow aisle and tried to make the tight turn at the end to come back up the other one.  It involved someone getting out to make sure she didn't flatten a little car.  Some choice words were said about the drivers ahead of her, backing out of and waiting to get into parking spots.  It was rather entertaining:)
And some random blathering...
There were a ton of people that had entered themselves in the 'wrong' group.  Your timing chip gives you the correct time, no matter where you start.  Don't run in the 45 min - 1hr group if you are going to start walking in the first kilometer, you just get in the way of the runners behind you.
If you are walking, or have to stop running and walk instead, make your way over to the right where the walkers are supposed to be.
There were spectators all along the route, clapping, cheering, holding up signs, ringing cowbells.  I couldn't decide if I was in a parade or in a ski race.
Lots of music along the way, most with a real good beat, some not so much.
There was a guy running in flip flops.  He kept even with us for quite a stretch.  If he ran the whole thing, it makes me cringe to think of what the skin (or lack of it) between his toes must be like.
Meredith passed some poor person flat out on the ground, getting full CPR, people yelling, the ambulance arriving.  She said it didn't seem right to keep going past, but there was more than enough medical help there.  Hope he made it.
There were a few other people sprawled off to the side here and there along the way.
There were plenty of water stations.  Note to self, next time (yes, there will be a next time!), keep to the middle of the road near the water stations.  Too many people stopping suddenly to grab a cup, or suddenly cutting in front of us to quench their thirst.  We carried our own water.
The weather was just about perfect for me. The sun didn't come out.  Could have done with a bit more of a breeze, which I thought we'd get along the ocean, but we left most of the breeze behind at the starting line.
Just under 49,000 people registered for today's run.


Meredith works for the podiatrist again tomorrow.  He's always been asking her how her training is going.  She'll be hobbling around in the office tomorrow.
Now the hard part will be to keep up this running.