What a crew we have here.  Calli is gimpy, always will be, and no offense meant by using that term.  Perhaps the PC term would be physically challenged.  Jake is still dealing with his limping on and off issue, and now Luna has come up with something sore on her left front.  The last couple of days I noticed she was a bit iffy on it at times, and then last night, after actually crashing for a decent length of time, she was seriously limping on it when she got up.  So today we tried to keep her quieter.  Kind of like trying to tie down a tornado.  Took both Luna and Jake through the bush on leash this morning.  I made the mistake of commenting that it wasn't going too badly, mostly because Jake wasn't able to rush ahead of Luna, so she wasn't bucking at the end of the leash because she was left behind.  (I haven't been too successful at teaching her great leash skills)  No sooner had I said that than we crossed a fresh scent of something, probably coyote, and the bucking started in earnest.  She spent a lot of time in the house today, and she wasn't given access to any soccer balls.

Meredith has joined the limpy, gimpy group.  We joined the Sun Run training clinic together, we've done the other two runs each week together, every single one we are supposed to do , and now Meredith is having issues with her heels.  So much so that she decided that she was going to miss today's run.  So I had to go on my own.  I haven't done any of the training runs on my own until today. 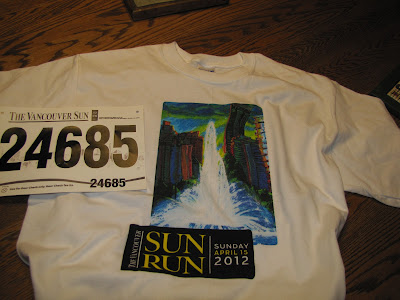 Remember at the start how I said I hate running.  I still hate running, the only difference now is that I know I can do it, but I still don't really enjoy it while I'm doing it.  I do like how I feel about myself after it's done. That feeling of success, the feeling of doing something that I once thought impossible, that smug feeling as I run down the road, and the cars pass me.  But no, I don't actually enjoy doing the running.  Running with someone else is easier.  It's harder to let yourself give in if the other person is still running.

So I was a little worried about this morning's run.  I couldn't even take Luna with me to keep me company. The first running interval was 15 minutes.  I started out slowly, as the first interval is always the hardest.  It takes a while to get into that automaton kind of state.  Half a mile generally downhill, and then a mile uphill. The sun was shining. I was in a tank top and shorts.  Thankfully the air was still cool, as I fade rapidly if I'm too hot.  I knew I would be close to the top of the hill before the 15 minutes was up.  I managed to run all the way to the top before I checked the time, and I had gone one minute over.  I walked one minute, and then ran 14 minutes.  This time it was mostly flat and then some downhill.  Walked another minute, then ran 10.  That 42 minutes got me back to where I had started running, plus a little bit more.  According to Google maps, that 42 minutes got me 6.8 kilometers.  I'm kind of excited.  My secret goal was to run the 10k in about an hour.  At that rate I could.  Of course a lot of those 50,000 other people might get in my way.  Sure today was only 42 minutes.  On Monday we ran 50 minutes non-stop.  The Monday before that we ran 60 minutes, with a one minute walk after 40 minutes.  These last few weeks we have been told we are physically ready, it is just the mental part that gets in the way.  I think one of my biggest success of all these weeks of training was this morning's run that I did on my own.  We have one week and two training runs to go until the big day!
Posted by Karen at 11:50 PM