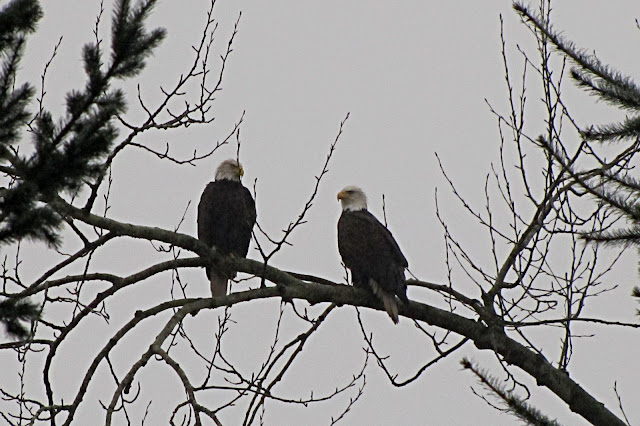 It was a close call though.
I was in the house, and thought I heard some sudden squawking.  Not the 'I've laid an egg' kind of squawking, but the 'something's wrong' kind of squawking.  I ran out of the front door, but didn't hear anything once I was out there.  I could see two hens looking a bit panicky, in the corner where the vegetable garden takes a chunk out of the south chicken field.  I walked across the driveway towards the fence, and suddenly 30' away from me, a bald eagle took off in flight out of the field.  There was a mess of feathers scattered around, and a poor frazzled hen bolted in the direction of the chicken coop.
I went to help her out.  She was missing all her tail feathers, and some on her back.  There was some blood and she was favouring one leg.  I stuffed a bit of hay in a small dog crate and put her in it in the barn in the dark and quiet and left her there for a few hours.  Later I moved the crate to the chicken coop, and left her in it overnight.  This morning she didn't look any worse, and this afternoon I let her out for a few minutes, and then put her back in the crate for her own safety.  To keep her safe from the other hens that is.  At times hens can be vicious, the term 'hen-pecked' was coined for a reason.  Tomorrow I'll give her more freedom.  Maybe I'll set up the dog x-pen and put her and the crate in there.  She'll probably make a full recovery.  I've found that chickens seem to recover well from injuries.
I love seeing the eagles, but leave my hens alone! 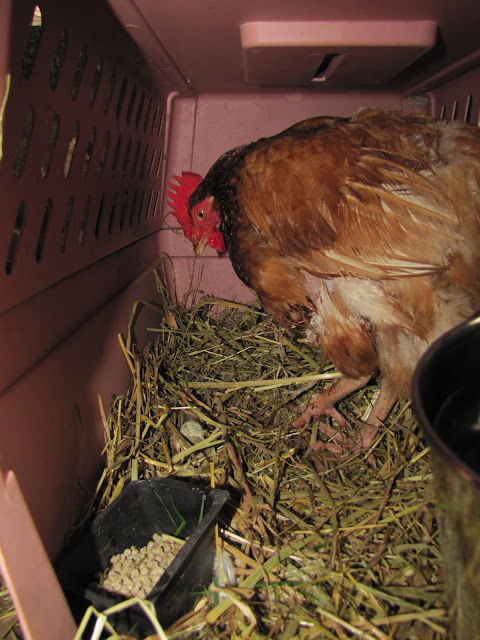