You know the old 'hindsight is 20/20', the 'shouda, woulda, coulda, etc.  Yeah well, it bit me this morning, the hindsight thing.
Jake had been showing some slight signs of improvement with his knee.  More times of  getting up from a down position without limping. The last few days or so I was allowing him to do the bush walk off leash.  Still controlling him verbally so he didn't do a lot of dashing around, but giving him that bit more freedom.

This morning I actually had a leash with me, just in case I thought I needed it.  Sometimes as we are about to go through the gate to the bush field, by the way the dogs are acting, we know there is some fresh coyote activity.  No signs of anything this morning, so off we went.  When we got to the back southeast corner, Luna suddenly was barking from the other side of the creek in the neighbours property. The creek as it crosses the property line, is in quite a deep cut in the ground.  We haven't fenced that part because there just isn't an easy way to do it.  Jake was gone after Luna before I had a chance to tell him to stay.  I can get all the dogs to stay if I get them before they start running, but once they have got running in a situation like this, they are so focused on what they are after, that a person might as well save their breath.  Next thing we hear Jake barking well into the neighbours.  Then we hear what sounds like coyote shrieking.  Then I start shrieking.  My theory is that if they are having trouble with a coyote, the more noise I make, the more back-up it sounds like is coming to their rescue, and hopefully the coyote will just keep going. Of course I am screaming for the dogs to come back.  Larry had run around the trail and met Luna half way.  I'd slid down into the creek bed and well, wasn't sure where I was going to head or what I was going to do next.  Then Jake came running back.  I hauled myself up the bank and made my way round to the rest of the gang.  Calli had been behind me, and had got herself stuck, so thankfully she didn't go anywhere.   There was a bit of blood in the corner of Jake's eye, and a bit in the fur in the top of his head.  I took a quick look and nothing seemed major.  When we got back to the house I got something to clean him up and have a better look.  Then I realized it wasn't just a skin wound on his head, it was a half inch opening right down to the skull.

So called my handy dandy vet just around the corner, and they said to bring him right over.  Poor Jake, he was sedated, shaved and vacuumed, had two staples put in the top of his head, and a stitch in the corner of his eye, where there is a smaller puncture wound. Thank dawg it missed the eyeball.  The vet thought the two wounds were made by top and bottom teeth, as in the coyote bit him.  At first I wondered if he had run into a barb wire fence.  I did wander out there later and the fences were either smooth wire or the non-climbable stuff.  No barb wire to be seen.

Although not really visible, the stitch is in the corner of this eye. 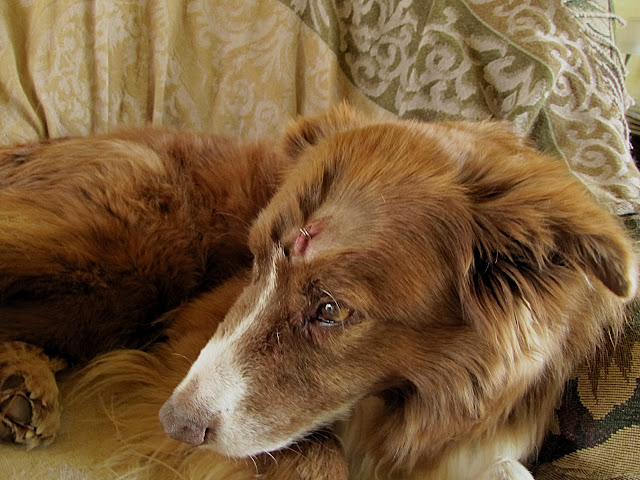 It took Jake a long time to shake off the sedative.  Now at 12 hours later he is looking much closer to normal, but up until I left to go to agility this evening, he was wobbling around like he was an 18 year old dog.  It was worrying and sad to see him like that.  He got a shot of antibiotic and is on oral antibiotic for 5 days.  Hopefully it all heals up fast.  His nose seems to be swollen tonight. Poor little Jake.

And of course I'm whipping myself with a wet noodle for not having him on leash, for the sake of his knee. Why didn't I even consider that a coyote chase might be in the cards.  A $153 mistake, and that's getting off pretty cheap.
Posted by Karen at 11:57 PM