In The Garden - Potatoes

I have managed to sneak a bit of gardening in just lately.  Despite far too much rain, Spring is actually here, and it's time to get going on what I can.  I planted these potatoes on Mar. 22.  They are Warbas, which are an early potato.  I aim to plant them around March 3, but the weather was just too uncooperative for that to happen this year.
This year I'm doing it a bit differently.  Usually I use a dibbler (broken spade handle) to make a hole and drop the potatoes in.  If the potatoes are a bit big, they don't want go to the bottom of the hole, and when I try to force them, there's a good chance I might break off some of the shoots, if they've already started to grow.  So this year I raked a trench and just spaced the potatoes along it. 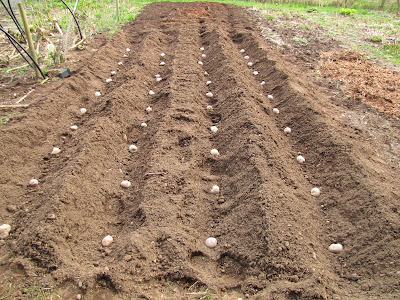 The new potatoes are formed above the seed potato.  I raked a few inches of soil over the potatoes, and as the shoots appear, I'll rake more soil over them from the hills between the trenches, until the trenches actually become the hills.  Theoretically, the higher I can make those hills, the more potatoes will grow.
Luna likes to get involved with everything.  She shot her ball into the garden, but she knows that she is not supposed to play soccer once it is in there.  She'll just lay and stare at the ball, waiting for me to get it for her.  Just like when someone is driving through the gate on the driveway.  She'll race to find a ball, start playing with it on the driveway, and then (you can almost see the smile on her face) she'll send it down the driveway, where it picks up speed and rolls towards the road.  She'll lay, staying inside the gate, and watch while you park the car, leap out, and race down the driveway trying to beat the ball to the road.  If she gets it just right, the ball hits the road and keeps on going. 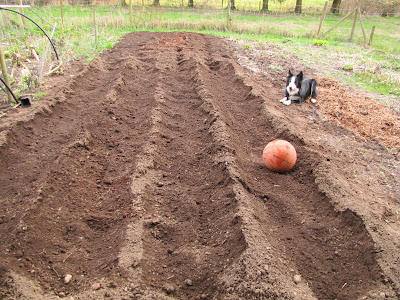 Since the weather was still quite cool, I actually laid a piece of plastic over the soil to help warm it up, after I had planted the potatoes.  A few days ago I planted the second bag of potatoes in the bottom half of that bed.  The bag had been inside, so the potatoes were more sprouted than the first bag were.  It will be interesting to see if there is much difference in the two lots of potatoes coming up.
Posted by Karen at 9:40 PM