After a long day of rain on Tuesday, we got a pretty nice break on Wednesday and Thursday.  Not brilliantly clear and sunny, but sort of half way between that and the rain.  Since we are nearing the end of February, and Spring will be really sprung before we know it, I thought I should get a bit of a start on the weeding. 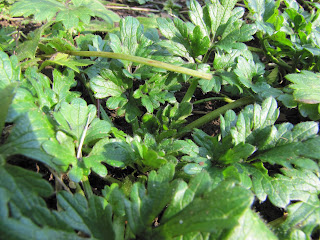 This is creeping buttercup, the bane of my existence. It is easily 50% of my weed problems. The stuff is impossible to get rid of.  It can drown out just about anything. It spreads by seed and with runners like a strawberry plant.  If you read the link, it says the seeds can be viable in the soil for up to 80 years.  Depending on which site you read, any roots left in the soil can generate new plants.  I actually didn't think they did, and the link I've listed says not, but then another site said yes.  It also says it likes compacted soils of low fertility, and shade.  That may be so, but it also likes organic fertile soils in full sun.  I think it's probably our climate.  Generally mild and wet. The buttercups seem to get right into the center of a clump of perennials.  I can usually prise the buttercup out, but I wonder about those left over roots that may or may not regenerate. 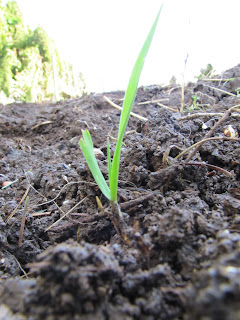 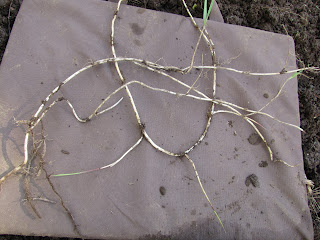 Enemy number two is couch grass.  Looks pretty innocent to start.  Just a few blades of grass coming up here and there.  When you start digging, it's like an iceberg, with most of the plant being underground.  Let a clump get well established, and it becomes a solid mat of roots.  The longest root I pulled out on Thursday was about 3' long, and that was because it broke at that point.  You can see all the shoots coming off at the root nodes.   The roots are extremely persistent, and easily work their way into a clump of perennials.  The only way to get rid of them is to dig the perennial out, blast the root clump with a hose, and painstakingly pull all the couch grass roots out.  Even then you probably can't get them all, as those roots will grow right through things.  Yesterday I dug up gladioli bulbs with couch grass roots growing right through them.  I've had them grow right through potatoes.  They were so entrenched in a clump of rhubarb, and slowing killing it off, that I had to dig the clump up, split it apart to get all the roots out, and I replanted it somewhere else.  If they are just growing in open soil, and it's just the odd shoot growing here and there, it's kind of fun to loosen the soil, and see how long a piece of root you can ease out without breaking it. Kind of like digging up that big dandelion plant, and seeing if you can get the whole long root out without it snapping off. Us gardeners have to find our fun where we can:) 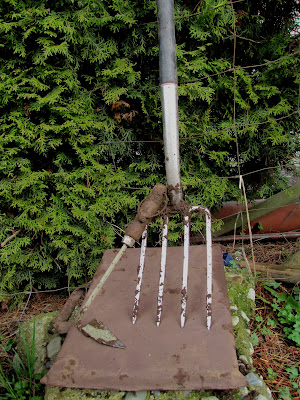 And here's my favorite tools.  A $2 kneeling pad from the dollar store.  I like this one, it has a handle.  Makes is easier to carry when you have an armload of other stuff like I quite often have.  It's easy to hang up instead of just throwing it in on the greenhouse floor.  I'ts quite firm and nearly twice the size of many other kneeling pads.
The garden fork was an end of the season deal at a major supermarket chain.  It's small, has a t-handle.  It's made of stainless steel and the handle is some sort of  composite stuff.  Great for me as I'm not the best at putting tools away, so you can leave it out and it doesn't rust and the handle doesn't rot. Made in China I'm sure, but I love that thing. I've had it for years.
That other thing is called a Nejiri scraper, which I found at the thrift store. It is what I use for weeding. Ideal for easing that buttercup rosette out from the middle of a clump of flowers. 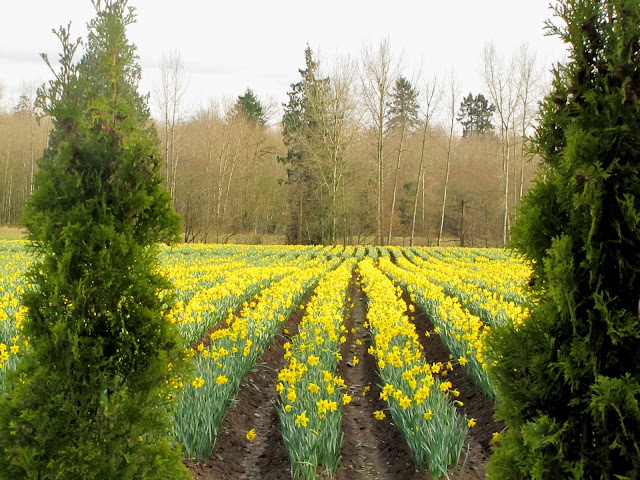