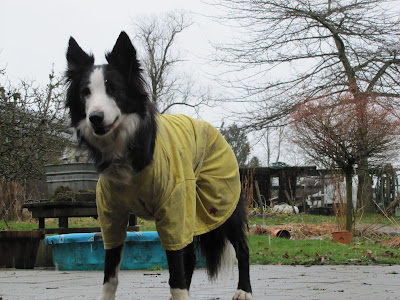 We were heading out for our bush walk yesterday, in the pouring rain, and sloppy mud, and nice clean Luna was going to be filthy in no time.  We have a couple of dog coats, but they don't do anything for keeping the mud off a dog's underside.  Keep in mind that Luna does nothing at half measures, and is on the go all the time out there.  Calli plods along, and Jake is more low key than Luna, quite happy to trot or walk at times, but Luna charges through everything at full speed. Her lower legs can be cleaned by asking her to go in the dog pool. The water on top of her is no problem, a towel quickly dries off the worst of it, but the mud splattered underneath is something else. 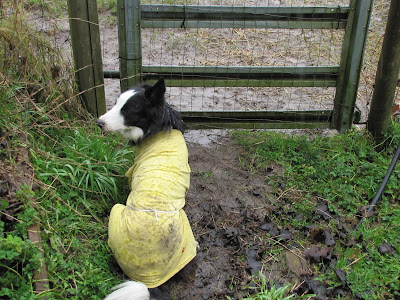 So yesterday I pulled an old t-shirt out of the rag pile in the garage, and since it was rather big, tied it round her waist with a piece of elastic to stop it sagging down so far.  It worked well for a while, until it got all wet and muddy, and then the last part was sagging enough that she was catching her back legs in it.  Nothing else to do but to knot it at the waist, and bare her midriff.  Hmm, there's a lot of other young females I can think of that go for that look! 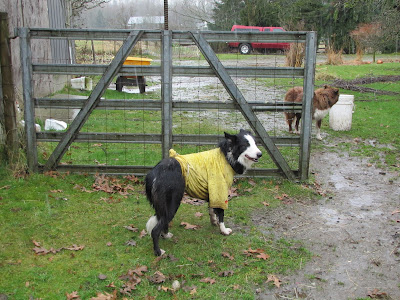 So the end result was somewhat of a success.  Her chest was clean, but the mostly bare skin on her belly was black, as were the insides of her thighs and her tail.
I kept thinking of those stretchy looking one piece suit things I've seen some of the Italian Greyhounds or the hairless breeds wear.  So to Google I went, and eventually I came across this:)
http://www.muddymutts.ca/muddy-mutts-dog-rain-coats

Just think, put that suit on Luna, and you'd hardly notice it. Black on black.  She wouldn't look anywhere as ridiculous as this dog does.
Somehow though, a border collie running full bore through the bush wearing this might be a disaster in the making.
Posted by Karen at 10:15 AM