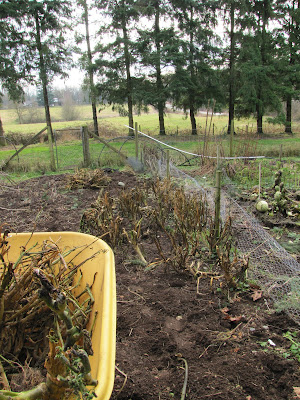 I took advantage of the good weather we've had and got a bit of garden clean-up done.  The broccoli was toast, so I loaded the wheelbarrow up with the old stems and took them out to the big compost pile.  And it is just that, a pile next to the pacific willow tree in the north field.  A spot where the big amounts of organic material get dumped, and they can stay there as long as it takes for them to rot down.

There are a few things in the garden that are still edible though.  The cabbages don't look particularly pretty, but once you pull off those gross rotted outside leaves, the inside is  still pretty good. 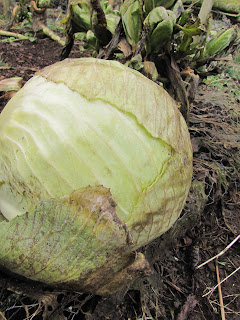 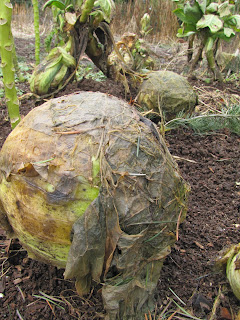 The other day I picked some cabbage, kohlrabi, beets, carrots and celeriac.
Kind of a sad looking mess.  The sheep have been grabbing bites of the kohlrabi as they go by on the way to the hayfield, so I think they've eaten more of it than we have.  The carrots were a bit of a disaster last year.  They didn't like the spot I put them in, and were also riddled with carrot fly.  The beets were next to them and did a bit better.  The celeriac didn't amount to much, and by the time I'd trimmed the roots off, as well as the peel, there wasn't much more than a bite or two left.  The same could be said for the carrots. 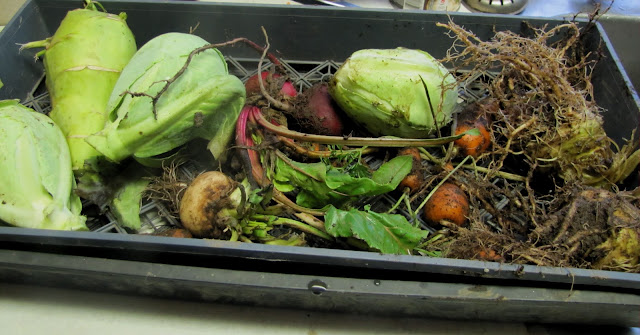 The best thing was the little cabbages.  They were what grew around the edge of the stem, where I had cut the first big head off, last summer.
Kind of like giant brussel sprouts. 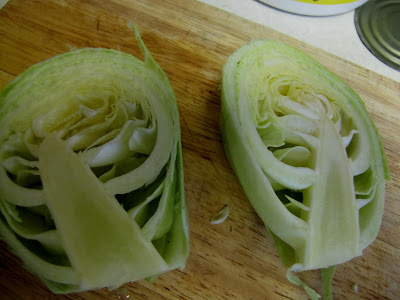 Slice it and chop it and grate it, and add a little onion, also saved from last summers garden, and it all made a pretty nice coleslaw. 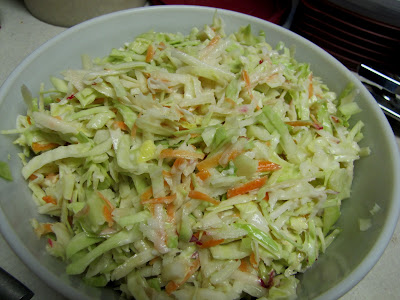 And back out in the garden, the broccoli stems are all pulled up, and there's a nice bonfire going.  I had pruned the raspberries and burnt all the old canes, as well as other dead woody stems from some of the perennials.  Add to that fir branches that the wind had broken off, and we got a pretty hot fire going.
We should have pulled up some chairs, waited for some hot coals and roasted some marshmallows, and invited you all to join us! 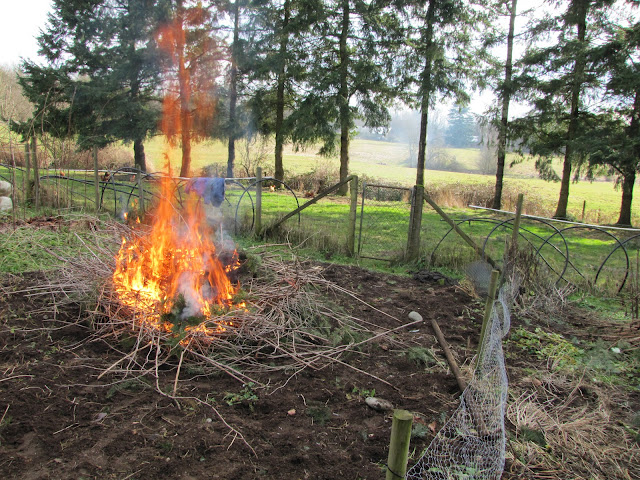