Jake had another trip to the chiropractor's on Wednesday. At least this one wasn't during a snow storm.  His pelvis was 'out' again.  After the last visit, we were to keep him quiet for a day or two, which we did, sort of, and the adjustment held for a couple of days.  But then after that he was limping again when he got up from a resting position.  No doubt running around in the snow, slipping on ice, etc was his undoing.
Dr. Lana said he wasn't quite as bad as the first time she adjusted him, and this time told me to keep him quiet for five days.  So I wanted to know how quiet was quiet.  She said on leash, no opportunity to do any crazy erratic movements, no scrambling on the wood flooring, no mad charges down the stairs.  Thankfully the snow is just about gone, although there is still some in the bush, and it is old, icy stuff.
Really though, Jake is a relatively easy dog to keep on leash, although he can really look 'sad' and make you feel sorry for him.  There is a gate at the top of the stairs, and he only goes down on leash.  We don't make any fast moves, no mention of taking dogs for a walk or out for a pee.  Those words by themselves can create a mad scramble to charge down the stairs, made much worse because each dog figures they should be the fastest and the first.  No tossing toys in the house. 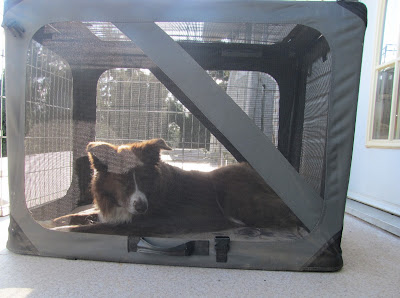 So when we go outside in the morning, Jake is on leash, and wondering why he can't race with Luna from the back door to the first gate.  After dragging him around with me into the chicken coops and the sheep barn, I was reminded that actually he DOES. NOT. WANT. to go in there.  And the sheep were totally freaked out too.  So now he gets taken so far, and then I have a big clip thing on the leash handle, and I just clip that to the closest fence.  He waits patiently, and will sometimes lie down.  I haven't taken him through the bush, because of the icy snow still on the trail, and he just can't figure out why the change in routine.  Why is it just me and him walking up the road first thing in the morning, when he'd rather be racing through the bush with Luna.
He's a dog that is quite happy to stay outside after we come back from the morning walk, and lay on the driveway.  Can't let him do that, because all of a sudden he might leap up and charge over to the fence to see what the chickens are cackling at.  Yesterday was an absolutely beautiful day.  The sky was clear when I woke up and stayed that way all day.  The kind of day that just kept you in a good mood and smiling.  So Jake got to share in it too, from his vantage point on the deck.
I am doing my two mile walks still, and it is fast enough that he keeps up a steady little trot.  My theory is that some steady trotting like that, with his pelvis in the correct position, is good.  It gives the muscles, ligaments etc. a bit of a gentle work out while everything is in the correct position, some practice so to speak, at holding it all in the right place.  Dr. Lana said that would be fine, we are just trying to avoid any erratic movements.
Two days down, three to go.  Pretty minor in the grand scheme of things.
Posted by Karen at 12:45 AM