And The Freeway Roared

Hwy 1, formally known as the Trans Canada, and which we just call 'the freeway', is about 3 miles due south of us. Normally we can't hear it, but when we have a weather system coming in, or specifically a mild, damp weather system, the freeway lets us know.  We can hear a dull roar of traffic, even though there are hills and ravines and stretches of trees and buildings in the way. This morning the freeway was roaring.  We had been warned for the last couple of days that this cold, snowy spell was coming to a dramatic end.  A winter storm warning, with it's red banner, had been splashed across the weather page.  A warm front was moving in, which, before it beat the cold monster to it's knees, would bring us some more snow, then freezing rain, and then just straight rain, and a lot of it. 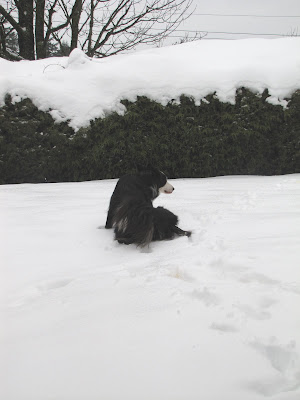 We just got a skiff of snow overnight, and it was about -6 this morning.  After we did the morning chores, I went out and removed the snow accumulation from the costco shelter that we have over our old travel trailer. That's the third time I've done it this week.  Then I started looking at other roofs that might not hold up under 8 inches of waterlogged snow.  I pulled snow off the north chicken coop, and then worked on the sheep barn.  A little bit of freezing rain came down while I was out there, but not much.  Sometime in the early afternoon it started again.  By this time the temperature was close to the freezing mark.  The rain was making a bit of a crust on top of the snow, and on a few other things, but it was nothing to worry about.  The road is brown slush.  Water is dripping off the roof. The roar has died, and now I can clearly hear the train a few miles to the north.

Luna says she will be quite happy to have a less icy place to pee.  And I think I'm going to knock the snow off that hedge before it gets all heavy and wet and pulls it out of shape.
Posted by Karen at 3:22 PM