Are We Just Wimps?

This morning we woke up to blowing snow,  temperatures of -12 C and a wind chill of -24 C.  Probably seems like nothing to some of you, but I suppose it is all what you are used to. This is unusual cold for us.  Not a record by any means, but probably the coldest we've had it for a few winters now. 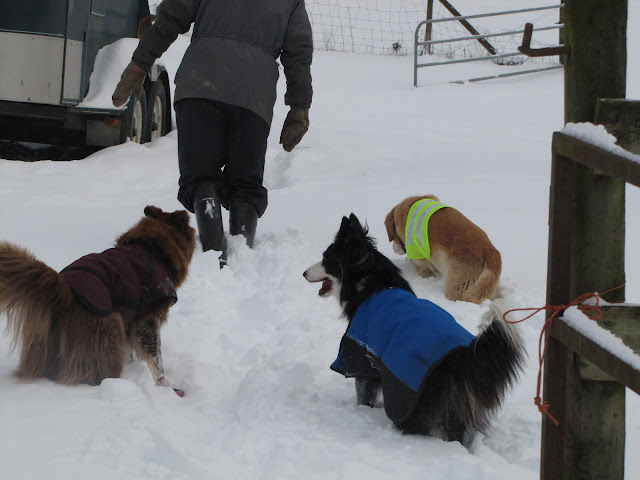 I already know that very cold or very hot temperatures affect Calli's back feet, with their nerve damage, so I had booties on her back feet before we even went out the door.  We own two dog coats. I don't know if they actually needed them, but I put them on anyway.  One that fits Jake (barely) and another one that would fit Luna or Calli.  I figured Calli had that good Lab undercoat, and a bit more of a fat cover than skinny minny, no undercoat Luna, so Luna got the coat.  Calli got a reflective vest and a bear bell, so we could find her out in the bush.  She has been wandering off the trail, scrounging up things, and taking her own sweet time to respond to our calls.
We didn't get very far, and both Calli and Jake were sitting down and holding up one front paw and then the other.  Back to the house I went, and put booties on all four feet of both of them.   The booties are just cheap little things from the dollar store, and they worked well, but every once in a while, one would come off in the snow, and the dog would stop and hold up it's foot.  We did get going, finally,  and Luna started playing with Jake.  That was good, as it took his mind off the weird feeling of wearing a coat AND booties.  Next thing there is a yipe, Luna stops dead in her tracks, and won't put her back left leg down.  I said 'Forget this', and I just scooped her up and started slogging back to the house.  I eventually had to put her down, and she used her leg, so thank goodness it was nothing major.  Next thing Jake stops, one naked foot in the air, and I scooped him up and carried him the rest of the way.  Looks like it's going to be a mostly inside day for the dogs.
So although this story (thanks Suzanne) makes sense,  does it depend somewhat on what a dog is used to?
Posted by Karen at 11:17 AM