Kind of about Calli

I'm so far behind with my blogging, and when it gets like that it's hard to know where to start.  It's been a busy couple of weeks.  My sister came to visit for 10 days, we did loads of 'thrifting' and made a quick trip to Oliver.  She went back to Ontario on a Saturday, then there was the Sunday market and on the Monday Larry and I headed back to Oliver to meet a couple of his brothers and their wives, one from Kelowna and one from Alberta, and we met at Wyndson Cottage.  It was a nice visit, Larry gave them a tour of the area, and it seemed really strange to have five other people all at once in our tiny living room.

Here is my lovely sister standing up by the new highschool.  When we went to Oliver we thought we'd make it a bit easier for Larry by taking Calli with us.  The weather was cool enough that we could leave her in the car if we made stops along the way (at thrift stores of course!), and Calli would have the whole back seat to herself and would just sleep the whole way.  Wrong!  I don't know if it is her advanced age ( 15 years, 7.5 months) or she is just uncomfortable or stressed or what, but she had her head up and panted until we finally made a stop at Bromley Rock and took her for a walk.  After that she put her head down and stopped the panting, but never did really go to sleep.
Notice the smoke on the mountain.  One of those fires that started four weeks ago is still not totally out. 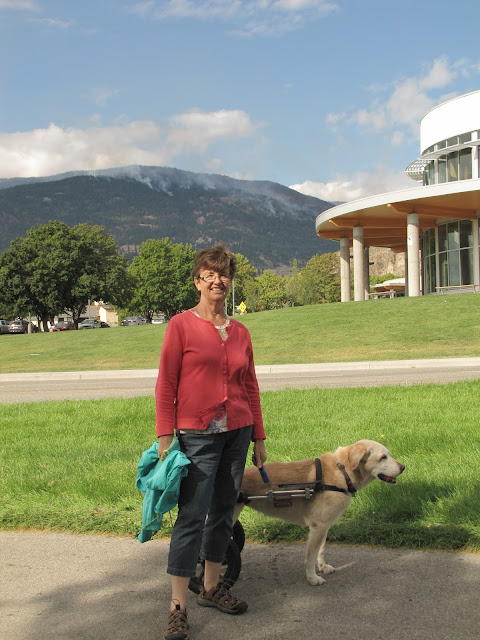 So Calli got her couple of walks a day and slept most of the time while we were there.  The day we were heading back, we made a stop in Okanagan Falls.  A school friend of Cathy's had managed to find me on Facebook and I connected her with Cathy, and by coincidence she was now living in Kaleden which is only 20 minutes from Oliver.  We had a great visit with her in an OK Falls coffee shop.  Afterwards we took Calli to the dog beach there, which had changed since our last visit, and wasn't as nice now, but was still good enough to give Calli a bit of fun in the water with her ball.  My thinking was that it would tire her out and she'd sleep on the way home.  I don't think it went quite that well, but she was better than on the way up. 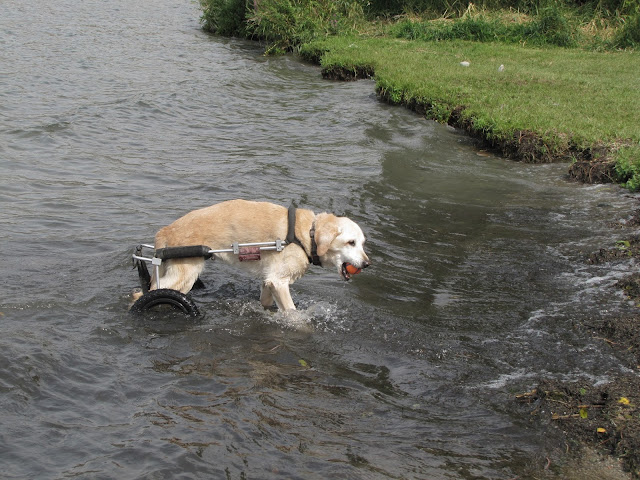 I just had to make sure I didn't throw the ball out too far so that she had to swim.  The tires on her cart float at that point, and since she puts more weight on one side than the other, it tips her onto her side in the water, and, well let's just say that is NOT a good thing. 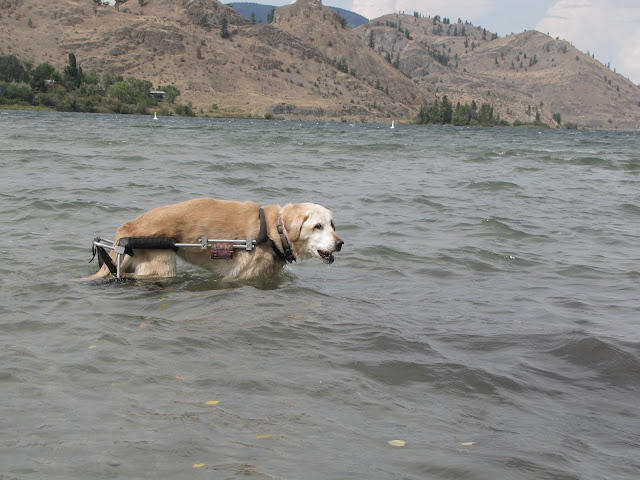 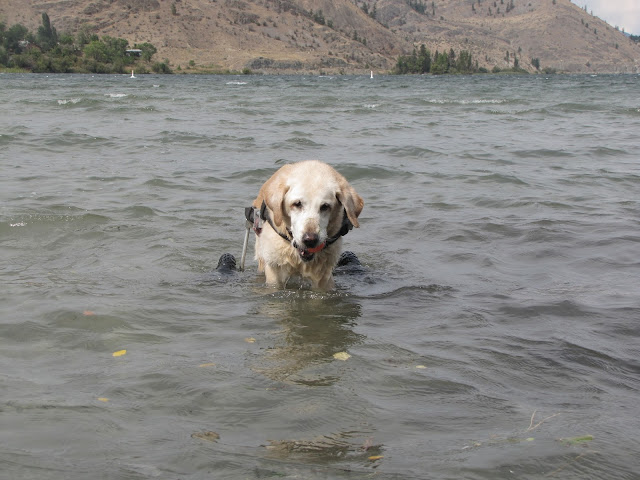 This was on the second trip with Larry, we were heading down to the river to go for a walk, and Luna and Calli had ended up like this.  It looked cute, but Calli is totally uncomfortable.  Luna is the queen bitch, and Calli knows it, and she would like to not have to touch or look at Luna in this situation.  In fact it makes it very awkward at times in the back seat trying to get Calli in a position where she is comfortable and is not knowingly too close to Luna.  Luna will sleep with her head on Calli's back, but Calli would never do that to Luna.  Anyway, it was just kind of cute to see them like this, but you can see how Calli is looking away. 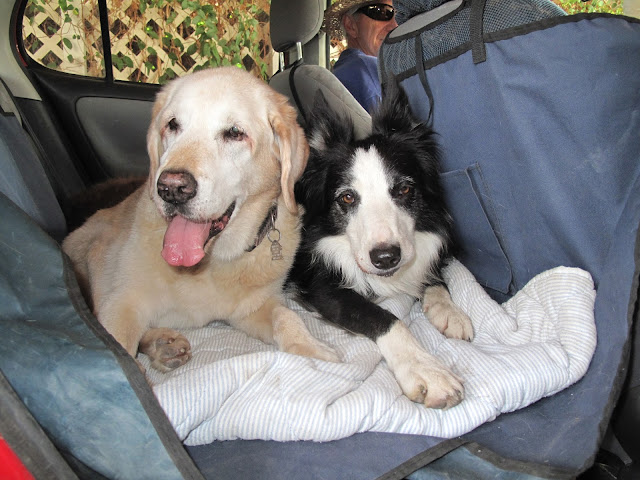 On the way home on Thursday we drove to Keremeos (45 min from Oliver) and stopped at a few fruit stands.  Calli had been panting heavily all the way, and almost whining.  We stopped just on the edge of town by a campsite we had stayed in 4 years ago, and walked down the old train bed to a spot where we could access the river.  It was one helluva steep trail to get down to the river, and it was a bit dicey with Calli.  We had walked along further to try and find better access, but no luck.  Anyway, we made it down without any one falling and the dogs had a swim in the river.  Calli was happy because she was able to get herself an enormous rock. 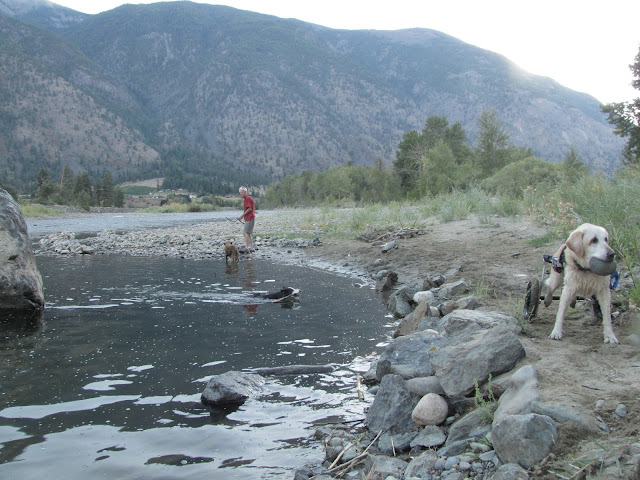 The bigger the better she says! 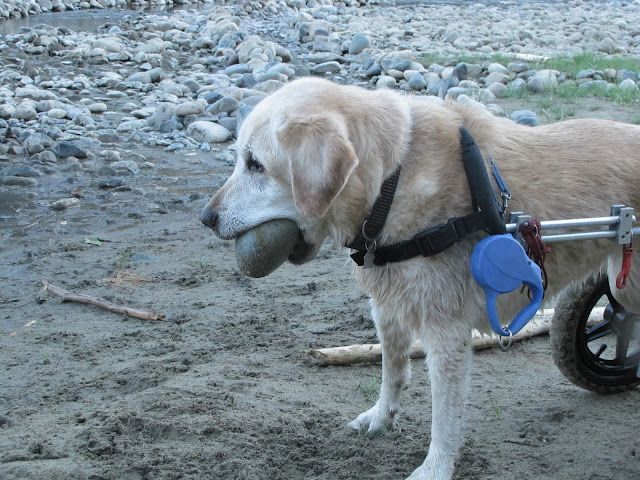 Thank goodness it was easier to push her back up the steep trail that it was to get down it.
When we got back to the car we fed them all and loaded back up.  Got Calli settled down with a pillow (she likes her pillows!) and she was quiet the rest of the way home. 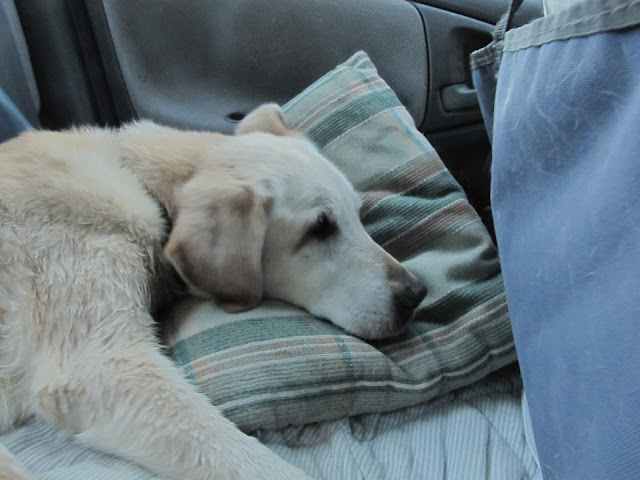 At the other side of the car Luna wanted a pillow too, but made do with the arm rest.  Jake was the peace maker somewhere in the middle. 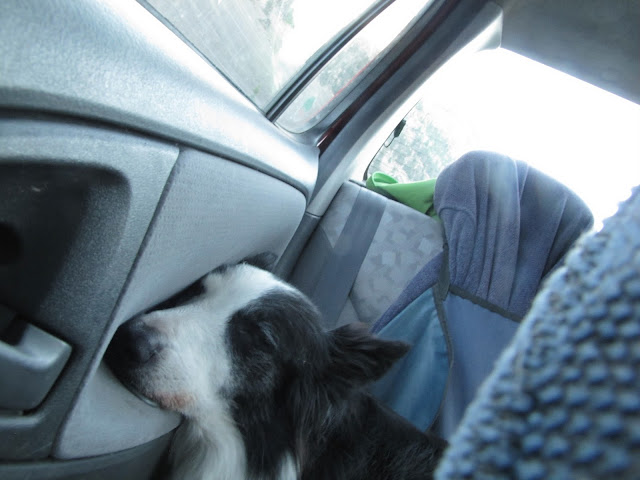 PS  Not the safest travelling arrangements for the dogs, but the best we can do in our little car.  When we take the truck in the winter, Callie travels in a crate in the back, and Jake and Luna are in the stowage area behind the truck seats.
To finish off, here's another shot of Luna laying next Calli.  This is Calli's bed, but this day Luna, for whatever reason, figured she would lay there too.  Once again Calli is not impressed. 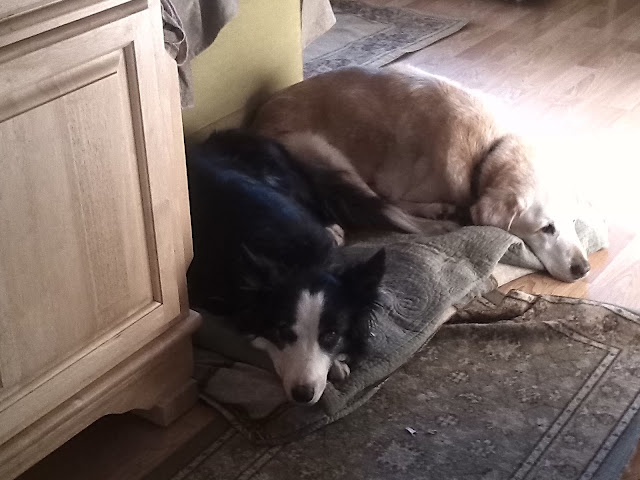