Four and a half weeks ago, two fires broke out at Oliver at the same time.  The last I heard, the Testalinden Fire that I showed you yesterday, was caused by lightening, and this one, the Wilson Mt. fire, was maybe caused by a downed powerline.  There was a heck of a windstorm that passed through Oliver that afternoon, followed by a bit of rain and lots of lightening.  We ran into it in Keremeos, on our way home that day.

Thursday morning last week I went out for a early morning walk with Jake and Luna.  I walked the three blocks up the hill from our place to check out the results of the other fire.  It had come, in some places, within about 50 feet of the row of houses at the base of the mountain.  I assume that was because that last 50 feet was being kept damp by homeowners and the local fire department.  As you can see the mountain is mostly rock, sand and grass, with the typical low shrubbery of desert type regions, and the occasional Ponderosa Pine.  As we went up the windy little road to the water tower, which is only part way up the mountain, we spooked a small herd of deer that were browsing on that last fifty feet of live plants.  As is often the case with fires, parts were burnt and parts were untouched. 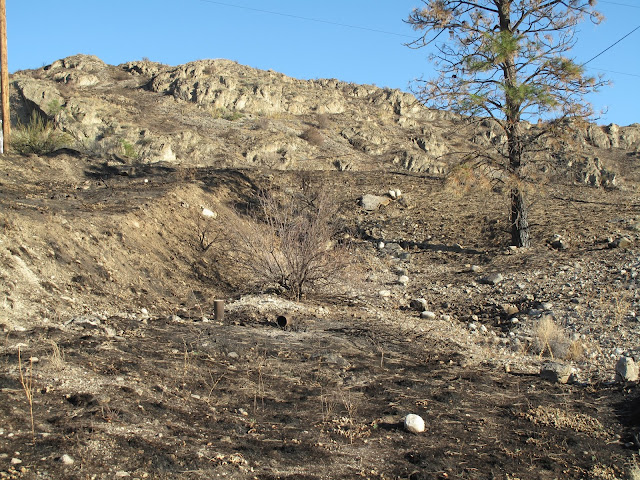 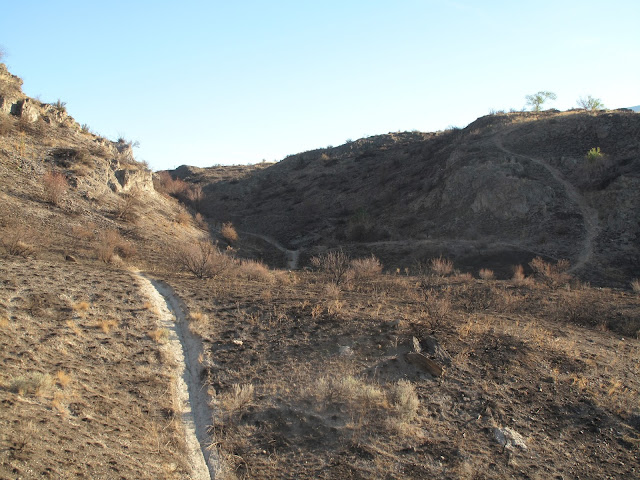 It does open up the possibility of forging a new, more direct route to the top of the mountain from by the water tower. That's not the top, it's just a rock bluff part way up.  It featured in one of last year's posts I think, Larry climbed up there, and then Luna decided to follow him. 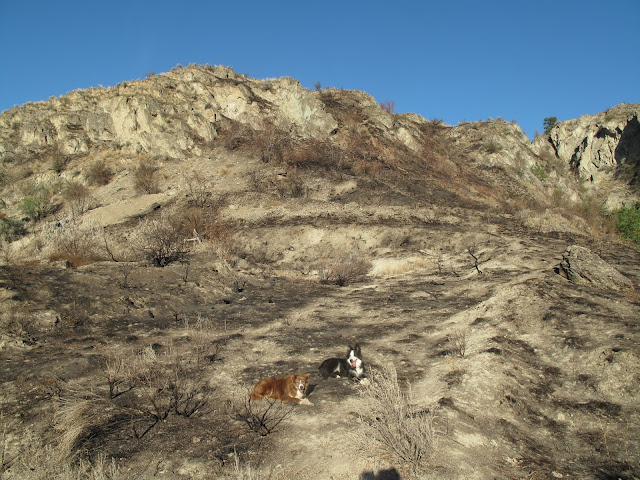 The smoke and a helicopter heading to the Testalinden fire to the south.  That's where the burning was happening the day before.  The evening before we drove past the little airport and there were 8 helicopters parked there for the night. (Do helicopters 'park'?) 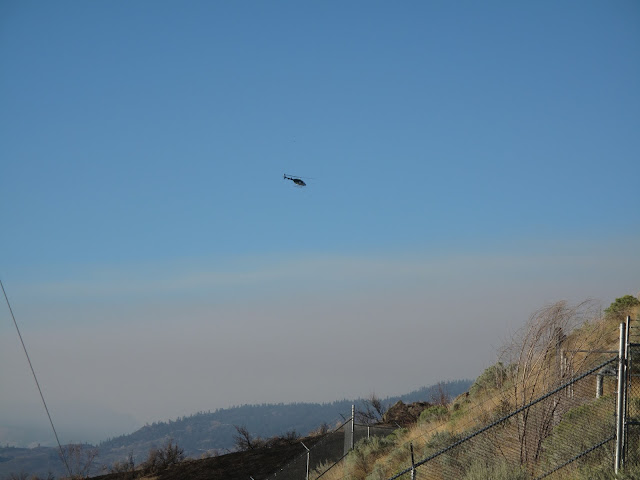 Looking over the south east part of town 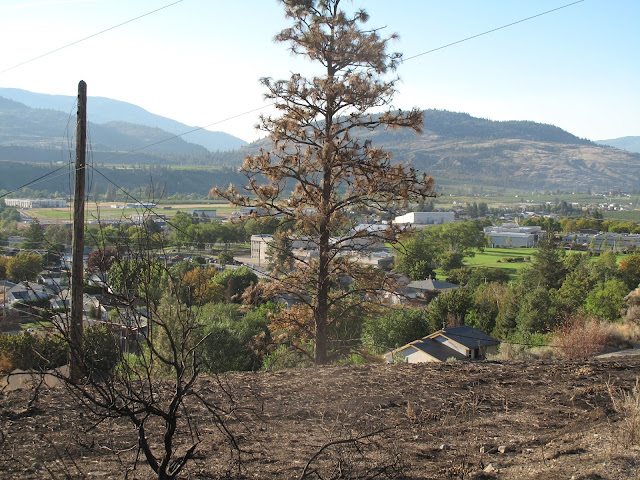 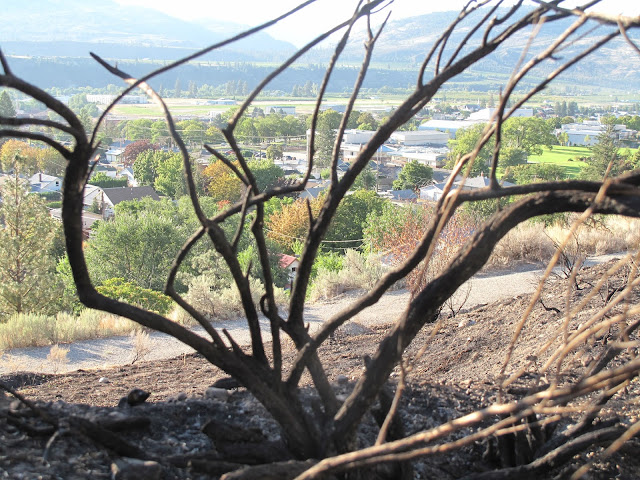 But already new life is appearing.  I'm betting that come next Spring, the mountain will be covered in grass and Spring flowers. 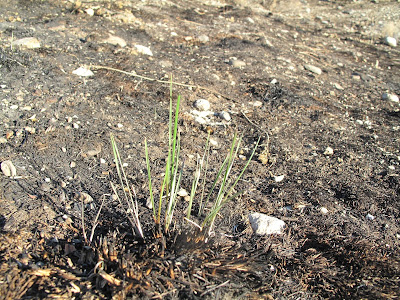 And just because....some Autumn Crocus back at the house. 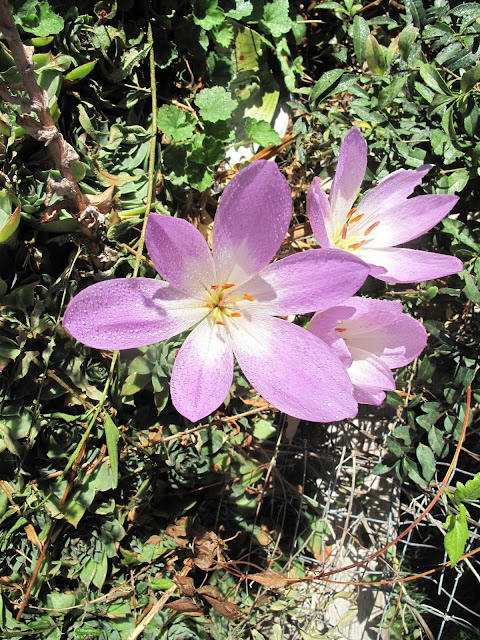 Here's the Testalinden fire as seen from the dog park that morning.  A lady came over to talk to us (Calli often attracts attention) and she said that she sure hoped those fire fighters knew what they were doing with their controlled burns.  We had those same thoughts. 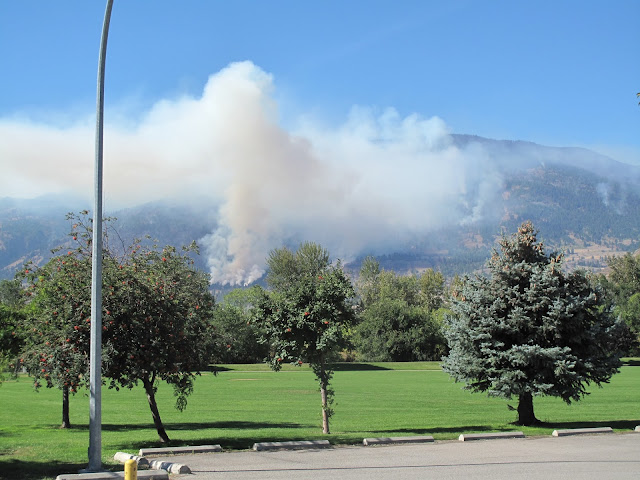 Later on that morning while I was trying to get two batches of jam made before we headed back to Abbotsford, all sorts of sirens went off. I looked out of the door and smoke was pouring up again.  Turned out that the sirens were for an accident up the highway that closed it down for a while.  A woman in a car went off the road and hit a power pole and the wires were hanging dangerously low over the highway.

We decided to head home via the 'back way'.  That took us up to Fairview road and right towards that controlled burn.  We were just another car load of those annoying 'rubber neckers'. 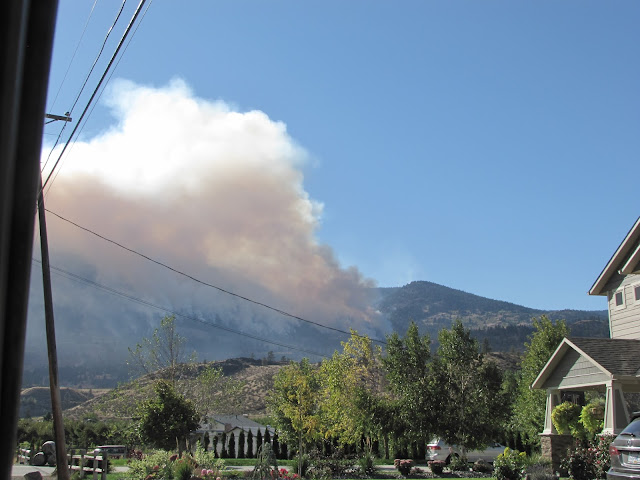 I didn't think we'd be able to get through, that the road would be closed.  No problem though getting to the White Lake Rd, where we turned.  Lots of traffic coming the other way, due to the highway closure. 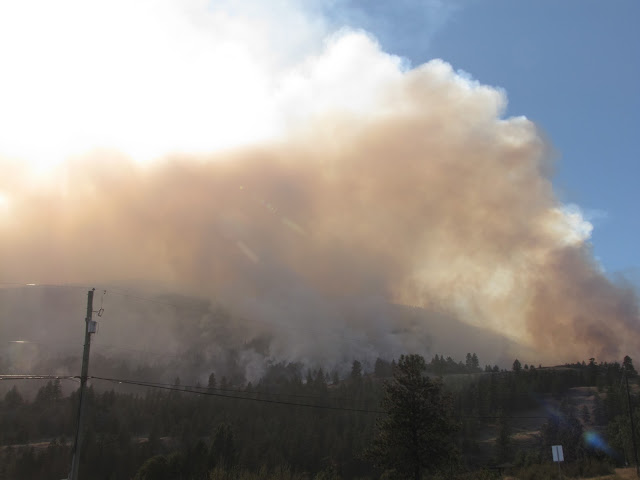 Looking back south after we are just about to join up with the Twin Lakes Rd. 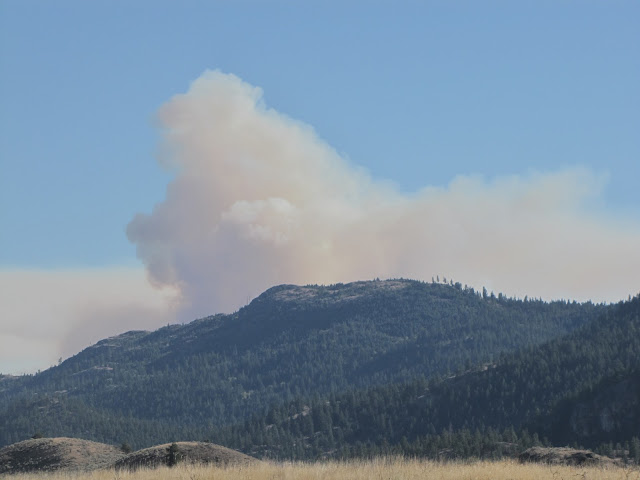 Even when we got to Keremeos and took the dogs along the old train bed and for a swim in the Similkameen river, we could still see the smoke directly to the east, showing over the top of the farthest mountain. 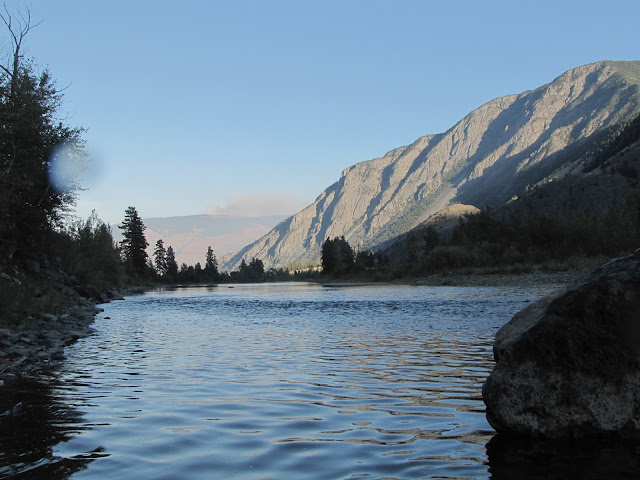 This is where Calli had her big rock.  She went in the water too and there was a moment of panic when she went a bit too deep, but it was all okay in the end. 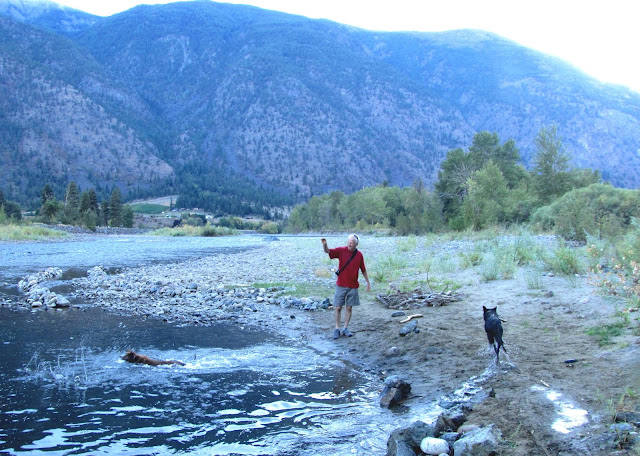 Jake says forget all the picture taking, just throw me that stick! 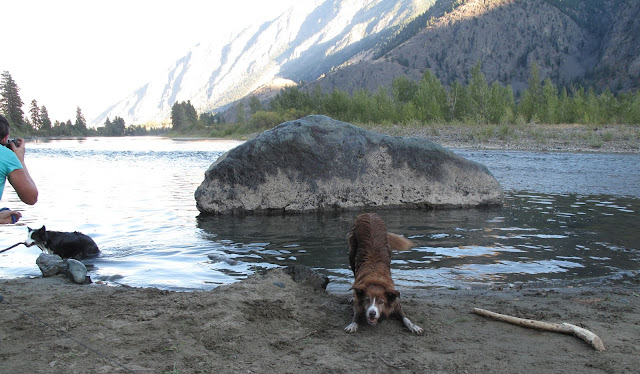 Makes me almost embarrassed to make a big deal out of these fires, after seeing video and reading stories of the fires in Northern California.  Hundreds of homes burned.  A fire going from basically nothing to 50,000 acres in a day.  Even here in B.C., there was a much more devastating blaze less than an hour's drive from Oliver to the east.  Homes were lost there also.  Thank goodness we are heading into cooler weather and a good chance of rain.