I'm trying to write more, shorter blogs.  Somehow I doubt I'm going to be very successful, because it seems when I finally get started, that the short part tends to go out of the window.
So we'll start off with a fairly simple one. Pretty well every morning after breakfast, we take the dogs to the back of our property and round the trail through the bush.  First thing is to get Calli in her chariot. 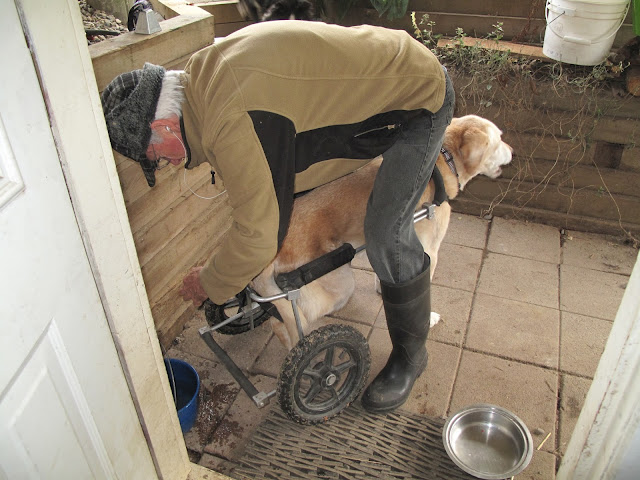 See the bell on the ledge behind Larry.  I've started carrying that with me again.  Firstly because of the two bears that were seen just down the road recently, and secondly because we saw a pile on the trail on Monday morning that looked suspiciously like one of those 'cougar marking it's territory' piles.  Jake was having a good long sniff at it, which is what made us notice it, because we may have missed that pile of leaves amongst all the other leaves that are on the trail.  It was a definite pile, with what looked like a clear scraped area around it.  Oh joy.  Anyway, we are going to keep walking through there, me clanging the bell when I remember it, and Larry carrying the Kougar Konker.  We actually had neither this morning, but he had a pitchfork instead.  Yesterday he spent some time with the tractor and a chainsaw out there clearing some of the brush and branches that were overhanging the trail, and that he tended to bang his head on (mostly because he wears hats much more often than me).  This morning he wanted to fork some of that cut  brush off the trail.  He was well armed.
The walk was pretty well uneventful.  This Broadleaf Maple tree took a big hit in our windstorm of three and a half weeks ago.  See the big scar about 20' up? 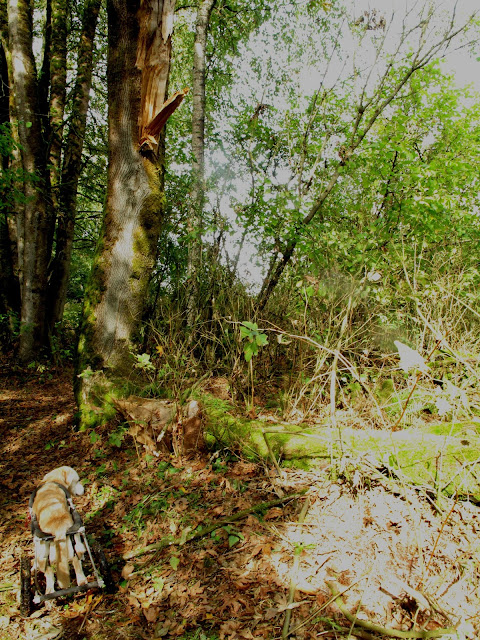 A massive branch came off it, and had the decency to fall parallel to the trail, but not on it.  Very convenient for bucking up into firewood.  I paced the branch out and it is about 75' long.  That should give us a few night's firewood for the winter of 2016/17.  We are heading into the 30th winter at this house, and the 30th winter of cutting firewood for our woodstove, which supplies half of our heat.  We lived here for about the first 10 years with only the woodstove for heat.  We were laughing  during a winter power outage.

Here's the end that broke off the tree, it's about 20" in diameter here 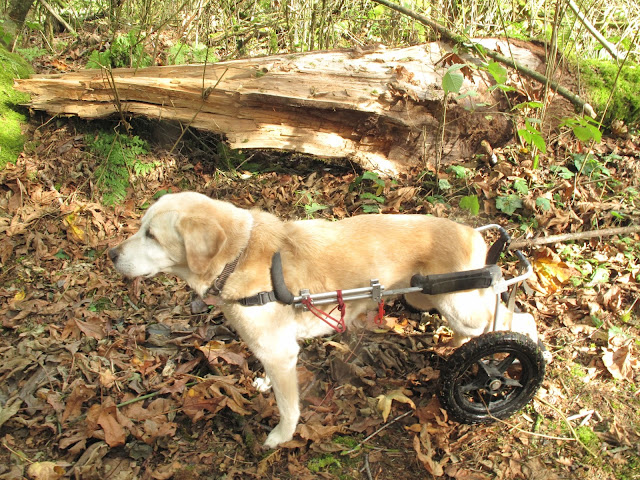 While trying to get Luna to pose on the branch to show the scale of it, (which she doesn't because it just disappears into the brush), I manage to catch a photo of the elusive sasquatch  Larry running off. 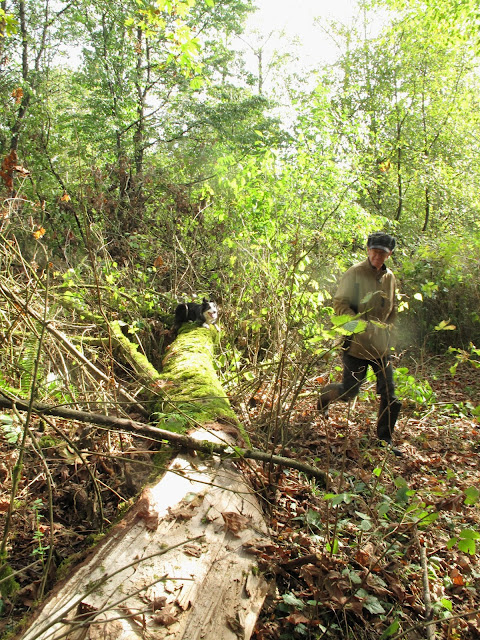 Continuing on the trail, that's the backside of that tree in the middle of the photo, and another big clump of maples on the right. 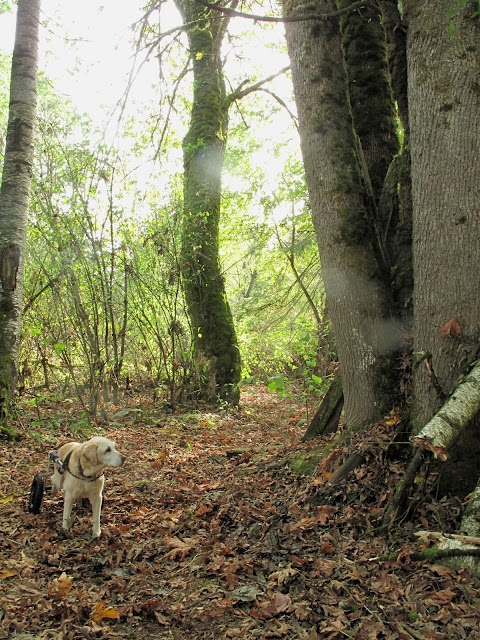 On the way back I stop at the north garden to check on the zucchini.  They've really slowed down now, and are looking pretty sad, and like they are almost done for the year, but I managed to scrounge up three this morning.  The lemon cucumber plants look like they are on their way out too, but there are lots of cucumbers.  Like the zucchini, I'm trying to pick them all at a certain size.  I didn't have a box so just had to fold the bottom of my jacket up to carry them all.  At this point the dogs and Larry have continued back to the house.  I picked a small handful of the Heritage raspberries, a Fall bearing variety, and ate those of course.  I wouldn't like vegetable gardening half as much if I couldn't eat while I was out there. 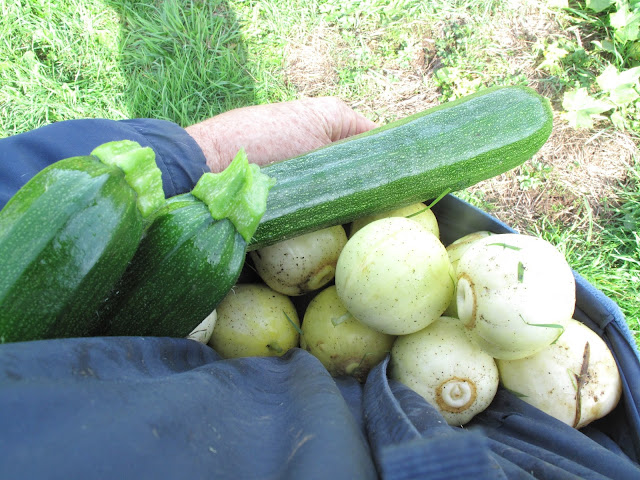 The second crop of figs is ripening too.  They aren't as good as the first crop, as we haven't had much sun or heat in the past few weeks, so they aren't as sweet and tasty, but that doesn't stop me.  I like to eat. 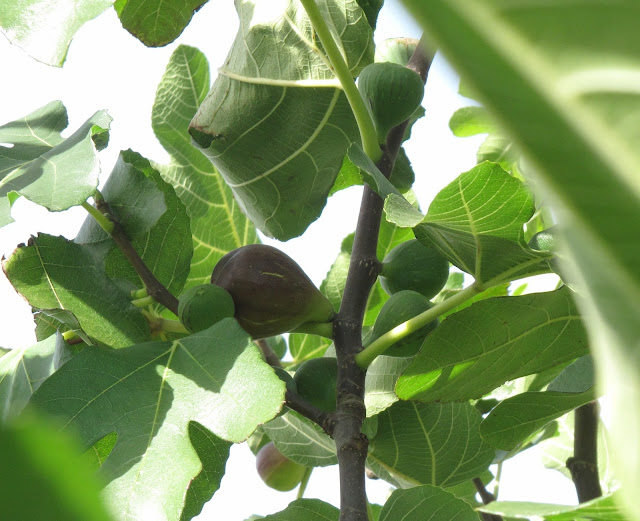 And this evening when going out to check on whatever Jake was barking at, I saw this!  Looking east and slightly south, over Abbotsford.  I climbed up onto the roof to get a better shot.  Can you see the moon off to the right near the tree and just peeking out between the clouds? 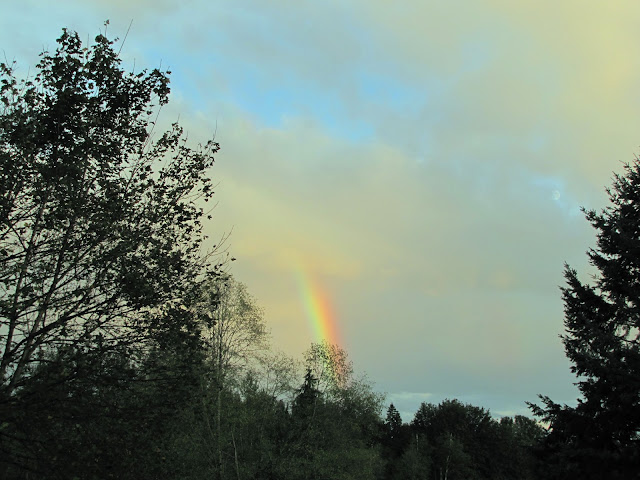 Did you know that there is a Lunar Eclipse this Sunday?  It's supposed to be a sunny day too (here), so hopefully will be still clear in the evening.  The moon will almost be fully eclipsed as it appears above the horizon. It's a Supermoon too! Got to remember to watch:)