Really, I should just repost this http://wyndsonfarm.blogspot.ca/2013/03/chicken-day.html, because it played out almost exactly the same as two years ago.  Got the phone call from the hatchery on Thursday, can I pick up the pullets on Monday.  Posted an ad on Craigslist that day, got a reply fairly quickly.  I kind of had a feeling I recognized the name, but wasn't sure, but it played out just like last time.  She said she was coming that night, well it was Friday night by this point, lada lada lada..... will of course be courteous enough to call if we can't make it for some reason.  How she desperately needed to get some hens to maintain their farm taxes. They couldn't come until after 10 because they had race horses, and it was a racing night.  Well by 11:30 I went to bed, and never heard from her again.  So I'm putting her name here so I have it, Alina, so that the next time we are selling the old hens, if I get a reply from her, I'll ignore it.  I emailed the next person that replied, asking how many they wanted.  Didn't hear back.  Phoned the next person.  He wanted to come out and see them first.  He said they looked good but decided they were too old.  Emailed the next person, they had an orchard, I pictured the old hens wandering around the orchard.  Gave her my phone number, she emailed back asking if they were closer to 2 years old or closer to three years old.  In the ad I said they had been laying for almost two years. Now we are at Saturday afternoon.  Regretting that I hadn't taken them to the auction Saturday morning. I needed them to go that evening.  Phoned the last guy to reply, he had sent two emails.  His cousin came out and picked them all up that evening. Phew.  (Those 23 hens had been here for two years.  We were only getting an average of 10 eggs a day from them, and there were a lot of weak shelled and broken ones.  Time to replace them.)  I'm sure our egg customers would love to think that the hens live their life out here, but unfortunately they can't.

Sunday was spent cleaning and pressure washing the coop out, the perches, the nest boxes, etc.  It was pouring rain that day, it was like November, and was pretty miserable. 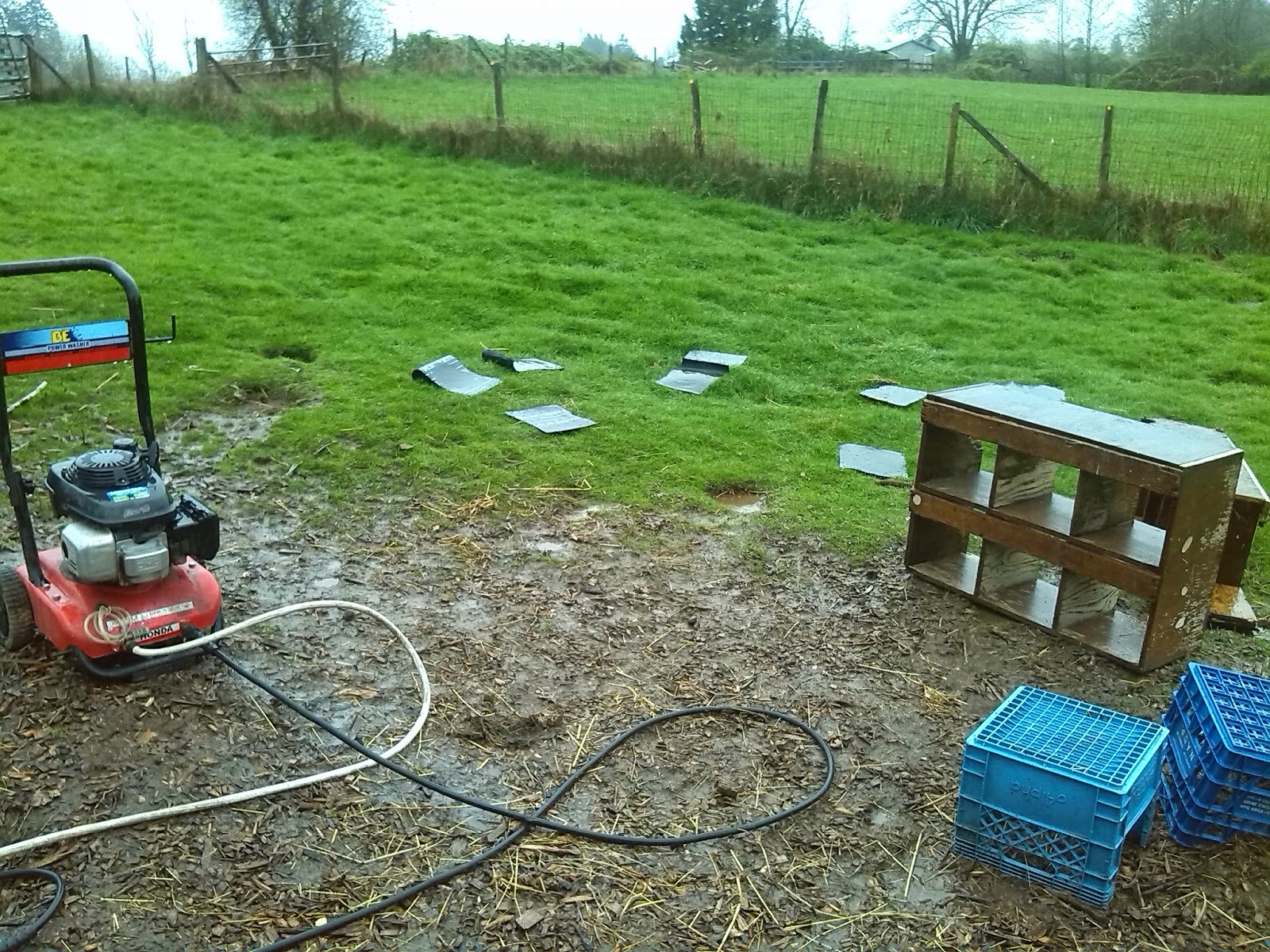 Larry put a fan in the coop to help dry it out, as the weather wasn't helping.  Monday morning was spent doing some repairs to the coop, and getting ready for the new hens, that had to be picked up by 3pm. We built the coop out of OSB board.  Kind of a dumb idea in this wet climate, but we must have had it on hand.  There was tar paper over it at one point, and I was going to put siding on it and make it all cute.  Obviously didn't happen.  Some of the OSB was rotting away, so a piece got replaced.  The bottom of the door was all beaten up and rotting too, so that got a new piece of plywood on it as well.  The shelter with the green roof was redone.  A few years ago Larry had quickly put one up, also made out of OSB, and it was sagging so much and so water logged I had to break it in half before I could move it.  In contrast this new roof is so light, and is slippery so that the hens probably won't be able to stand on it and then use it as a launching pad to get over the fence and into the vegetable garden. 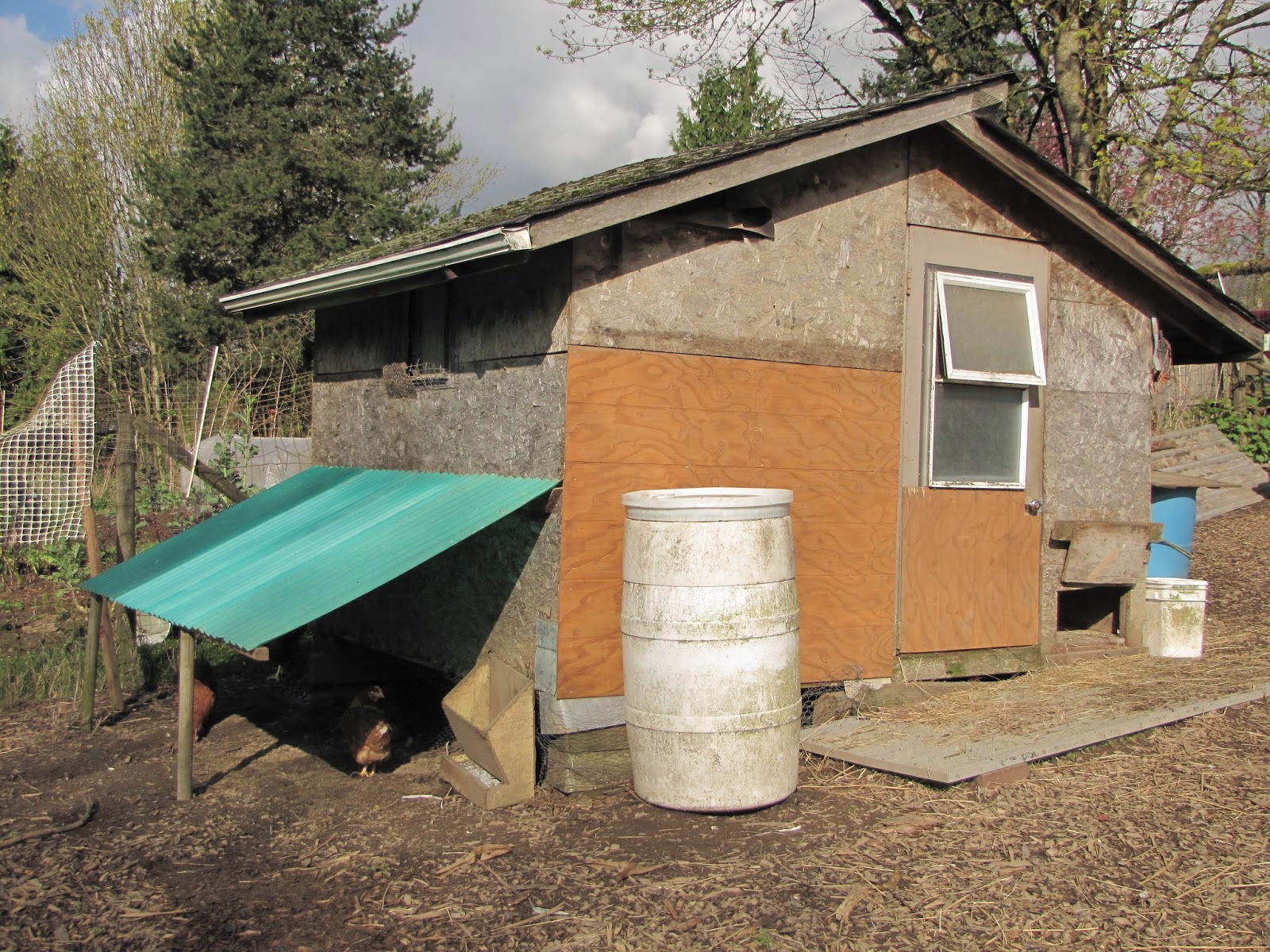 The last few times, instead of putting cages of chickens in the back of the truck, we have put a tarp in, taped it to the side walls of the truck box, thrown a bit of hay on it, and then the hens are all just put straight into the back of the truck (we have a canopy on it).  That works really well, and then when they are all unloaded, we just pull the tape off, fold the tarp in on itself, and slide the whole mess out of the truck, and the truck is good to go.  We drove the truck right down to the coop, and knew we would never get it back up the hill since it is not a 4x4. We got smart this time and put a cable on it and used the tractor to help pull it up the hill, and that worked great.

Sounds so easy when I write it all here, but it took the best part of two days.  So here we have it, 55 new hens.  Already wandering around on and eating the grass.  They will be kept in the smaller area until they start laying and get it all figured out.  They aren't laying yet, but should be in a week or two.

Here's a link explaining the reasons why we should be eating grass fed meat and eggs.
http://www.store.homeontherangefarms.com/why-grass-fed/ 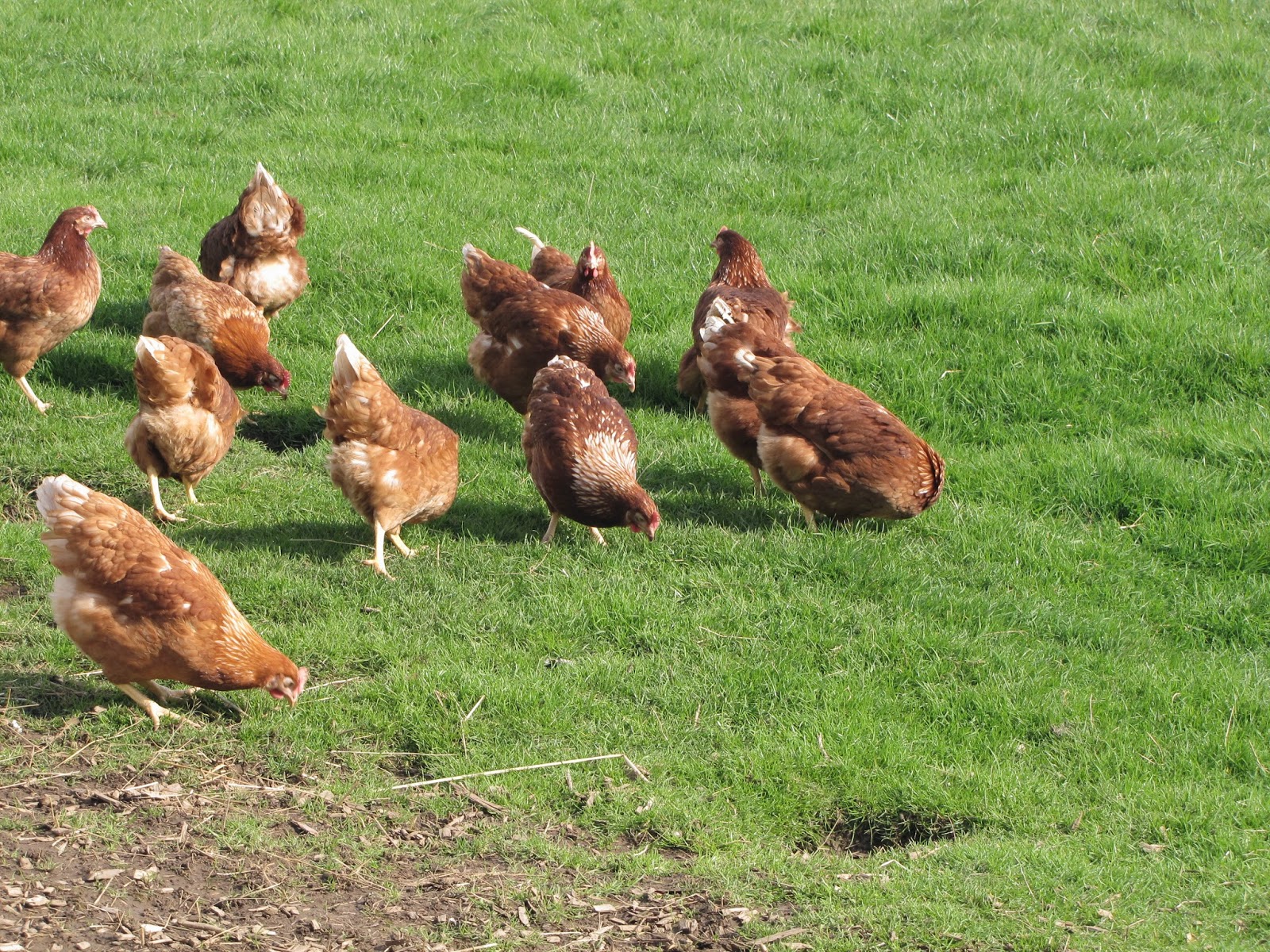