Saturday of the previous weekend, we headed out to some garage sales.  There was actually one just a couple of miles away, which is pretty unusual.  Their stuff was divided into two spots.  The household, 'woman's' stuff was in the carport.  Decent stuff, good prices, she just wanted to get rid of things, as they were moving.
The man of the house has his stuff down by the barn.  Tools, etc.  He wasn't going to let his stuff go very cheaply.  I tried to bargain him down on some garden tools because I thought he was asking too much, but he wasn't going for it, so I left the tools there.
I'd bought a nice looking microwave for $8 from his wife, and then on our way out, I passed an old bird bath base.  I kind of thought, even though it was missing the top, it would make a neat piece of garden art.  It had a $5 price tag, I offered $2, and the hundred pound hunk of concrete was ours.  It probably was that heavy, it took the two of us to get it into the trunk of the car.  As we are driving it back home, it suddenly occurred to me what I was going to use it for.

I don't know what that metal thing on top is called, kind of like a wind vane compass sort of thing.  I bought that for $2 I think, last year.  It's been sat on the patio table since then.  The circle on the bottom of it just fits around the top of the concrete base.  (Darn, I realized after that I didn't have it sitting on there straight, but you get the idea). 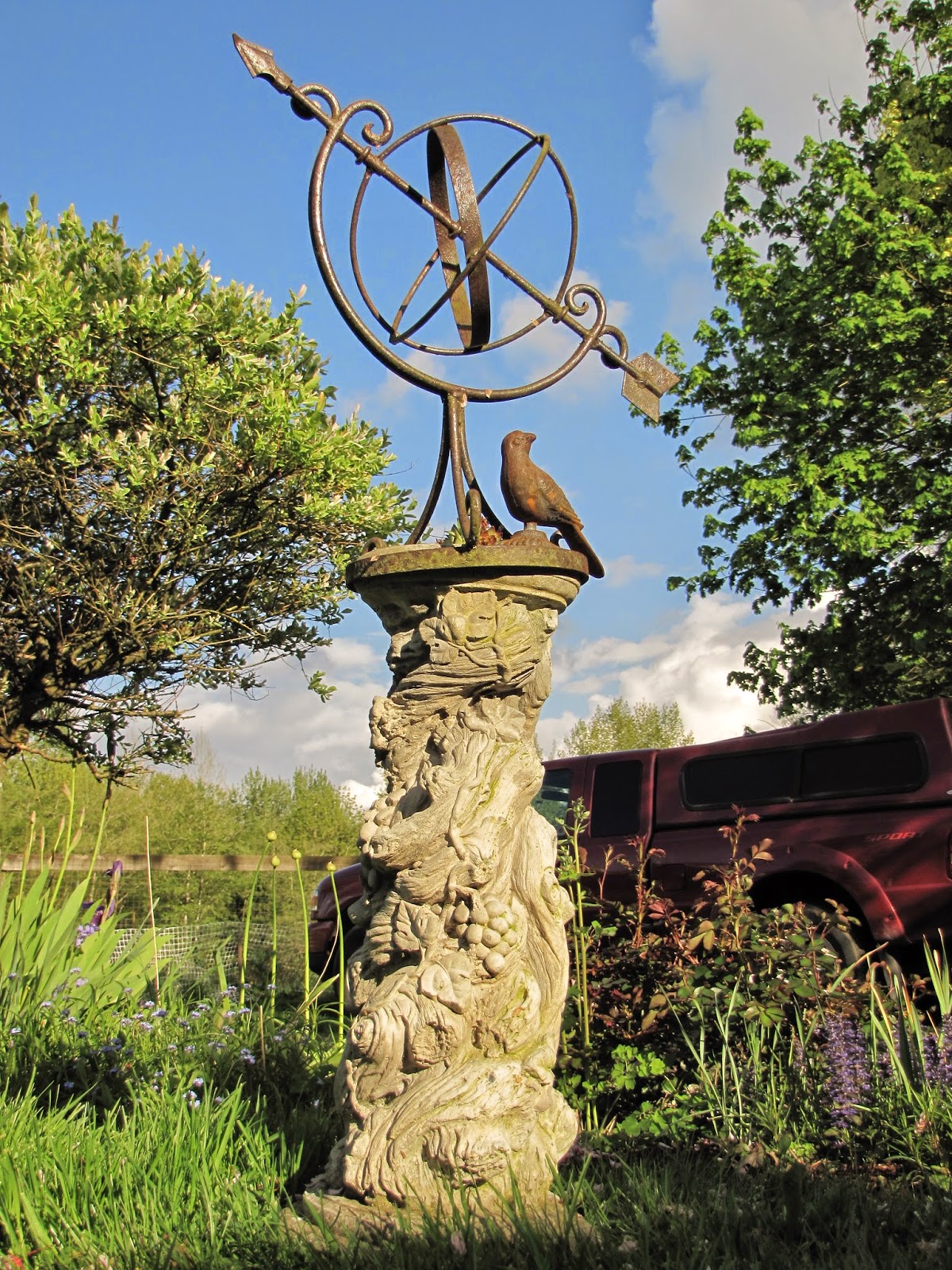 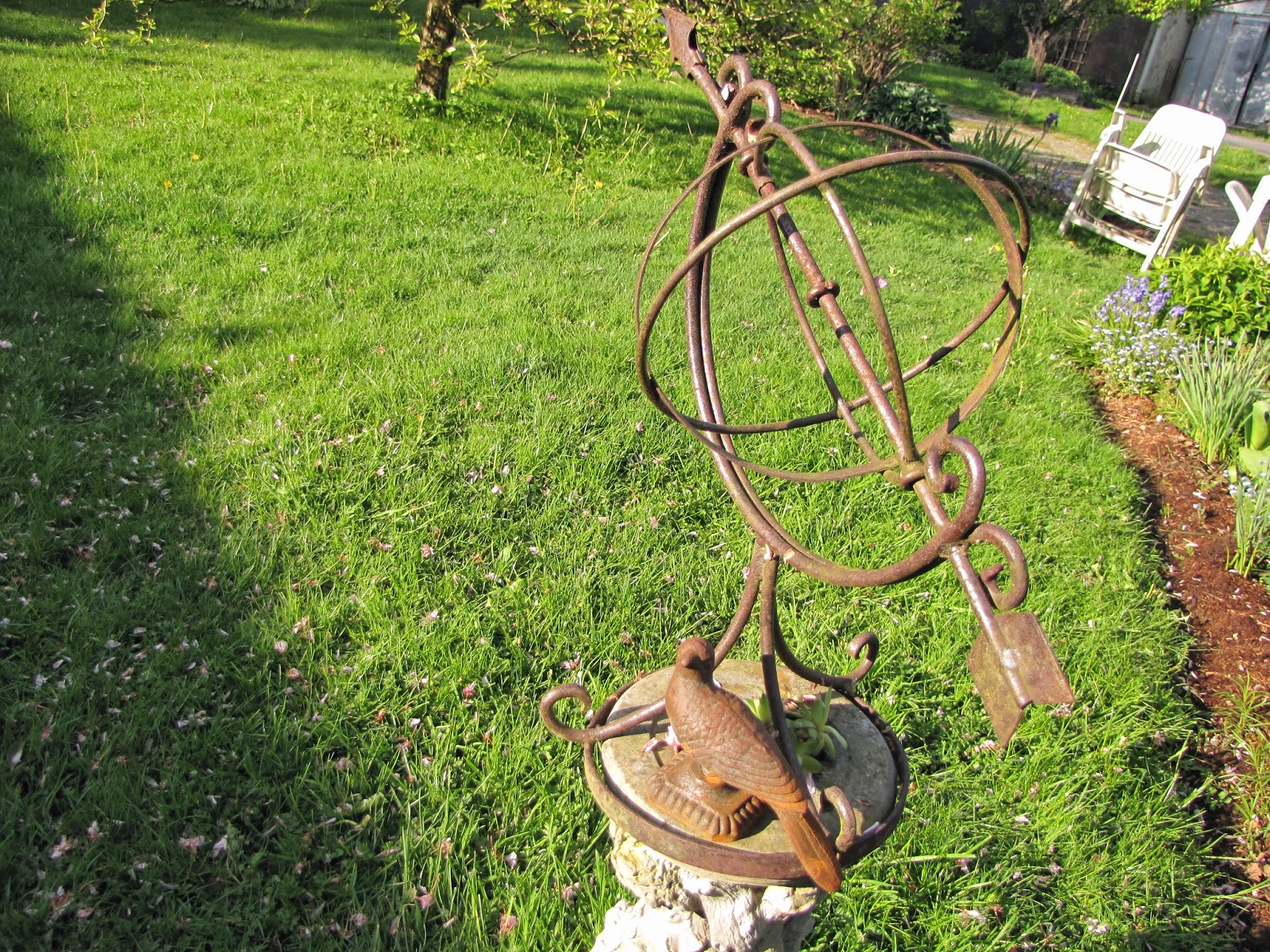 Because the base used to have a bird bath top on it, there was a hole in the top that looked a bit funny.  I couldn't find anything that fit over the hole and fit under the metal sculpture.   A few days later I was at the garden center, and saw the perfect addition.  Loved that rusty metal bird, it was perfect.  I was hoping it would fit underneath and cover the hole, but it wouldn't.  You know the prices of garden art at the garden center, it's not garage sale/thrift store pricing.  I was pleasantly surprised to see this heavy metal bird priced at $5.49, so it seemed like it was meant to be. 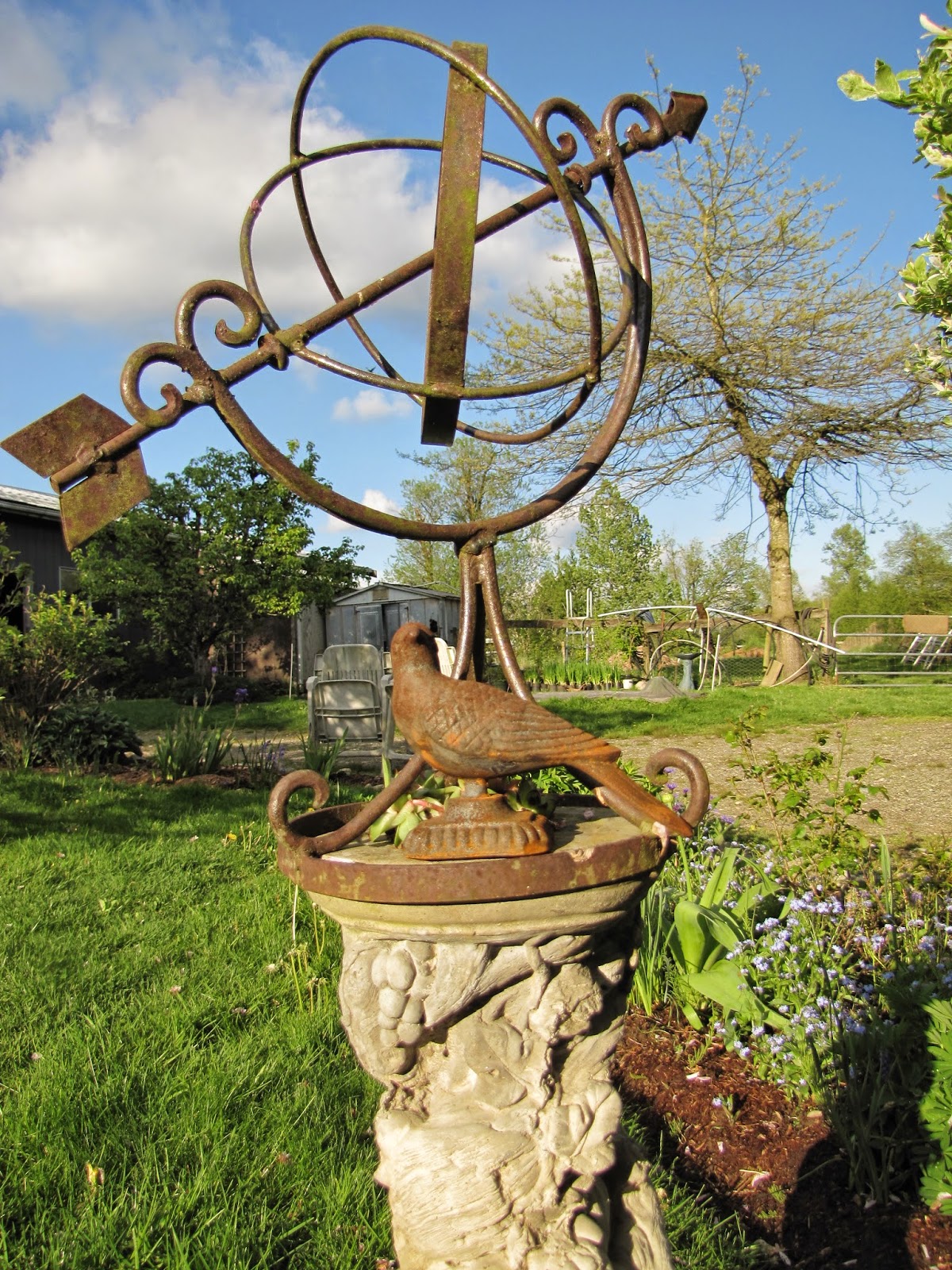 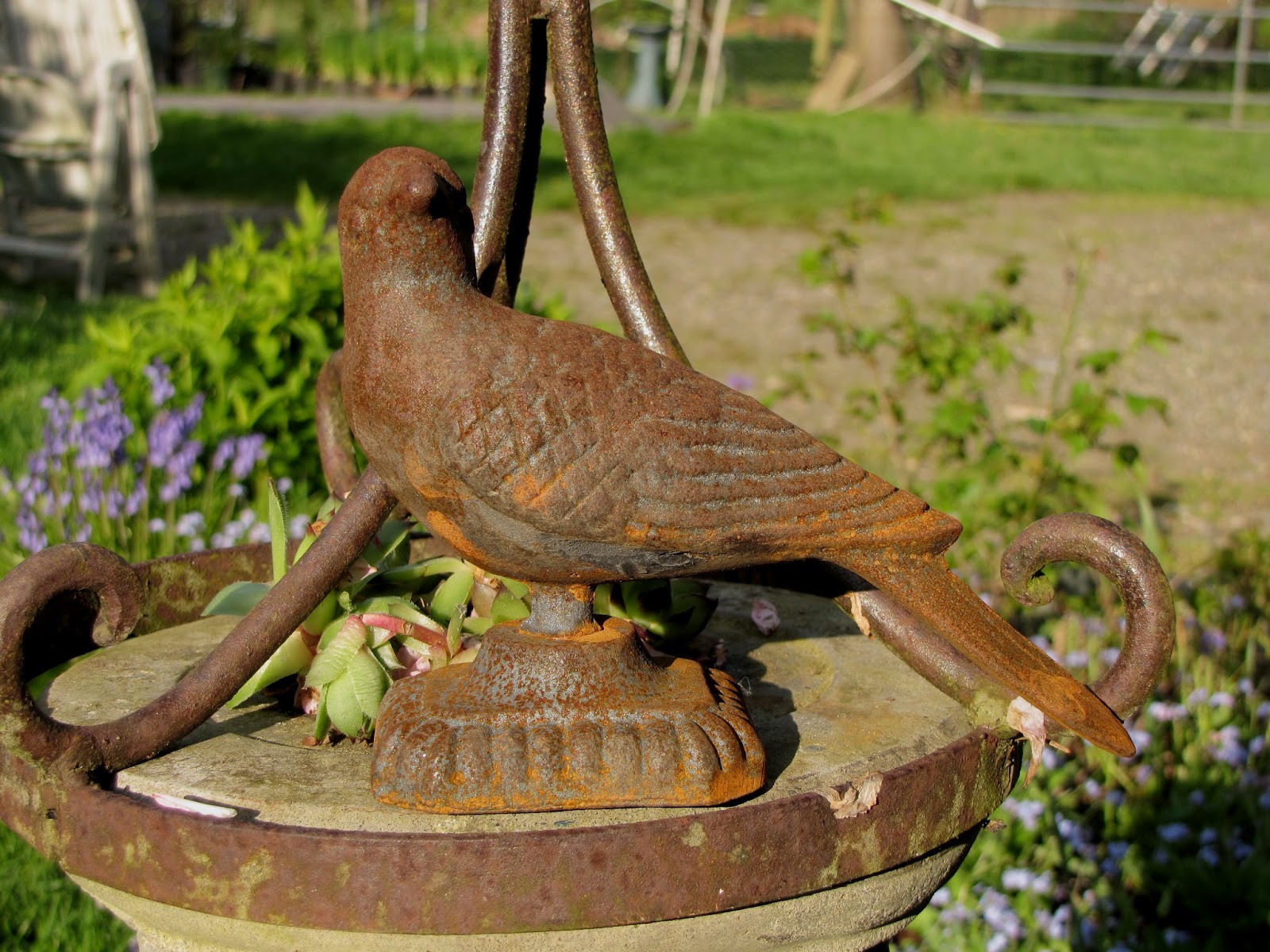 To cover up the hole, I put a bit of soil in it and shoved some Sempervivum (hen and chicks) in it, and hope it takes root. 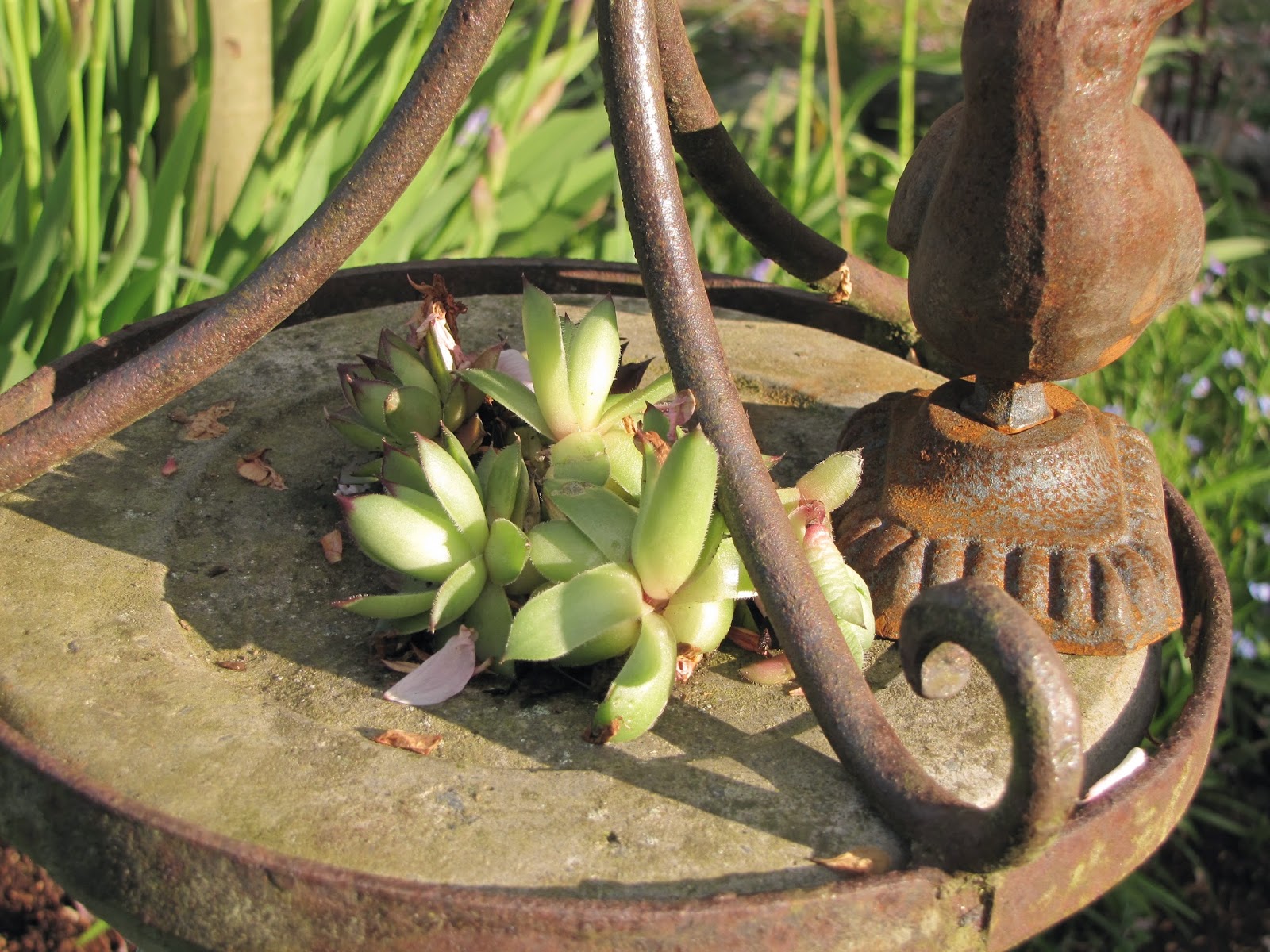 I have the perfect place for it to go.  David kindly dug out a massive Siberian Iris for me when he visited this week.  When I get the big hole filled in, I'm going to set my yard art right there.  I'll post a picture.

And here's a piece of yard art for Oliver.  I was at my favourite thrift store's half price sale yesterday.  I saw this little brown bird, it's about 8" tall, and thought it was a quail.  We see lots of quail at Oliver, so this fellow is heading there 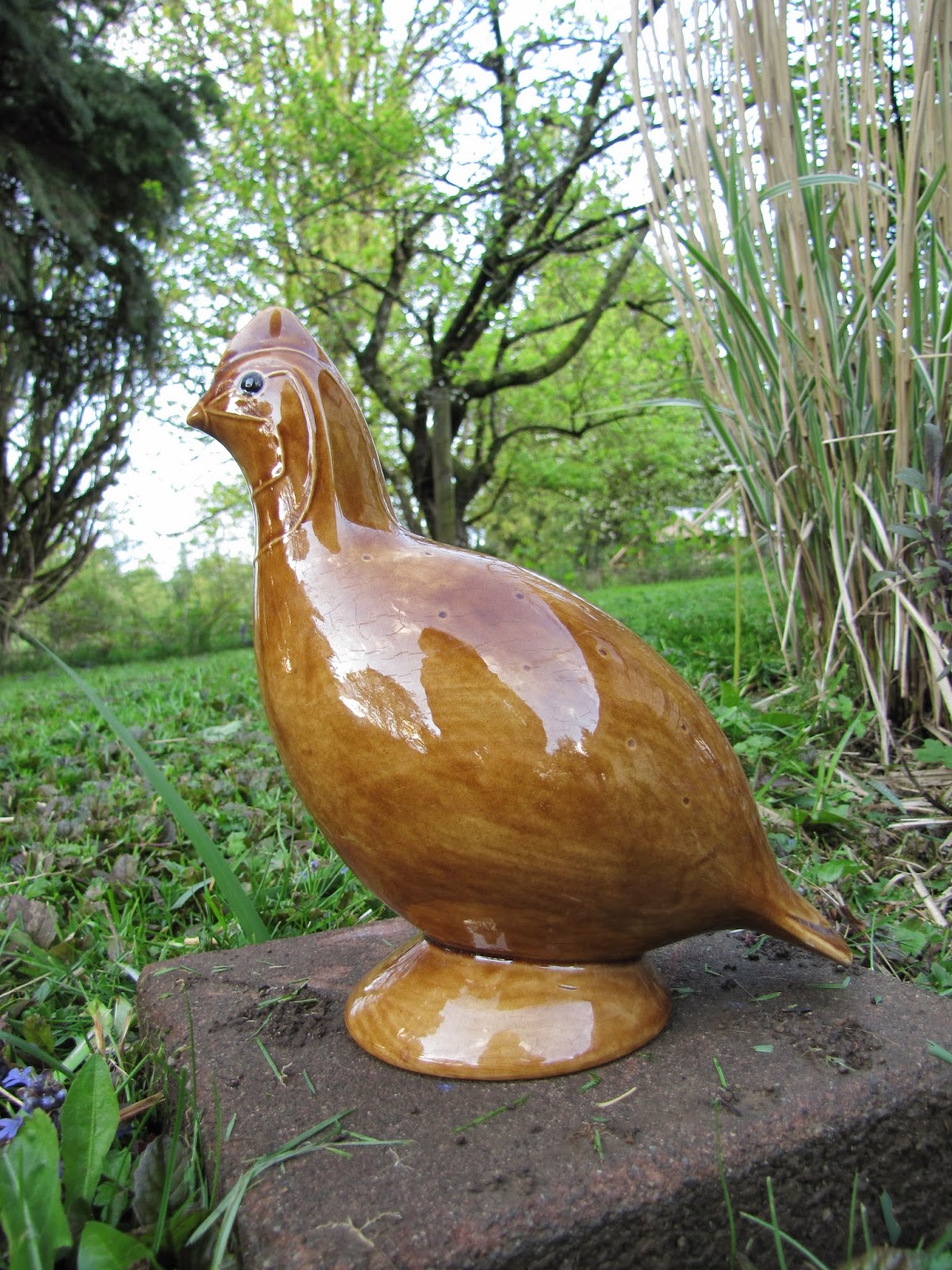 Or maybe he would rather stay here, he kind of blends in with the hens.  When I was paying the $1.50 for him, the lady at the checkout called him a guinea hen.  He's a quail to me. 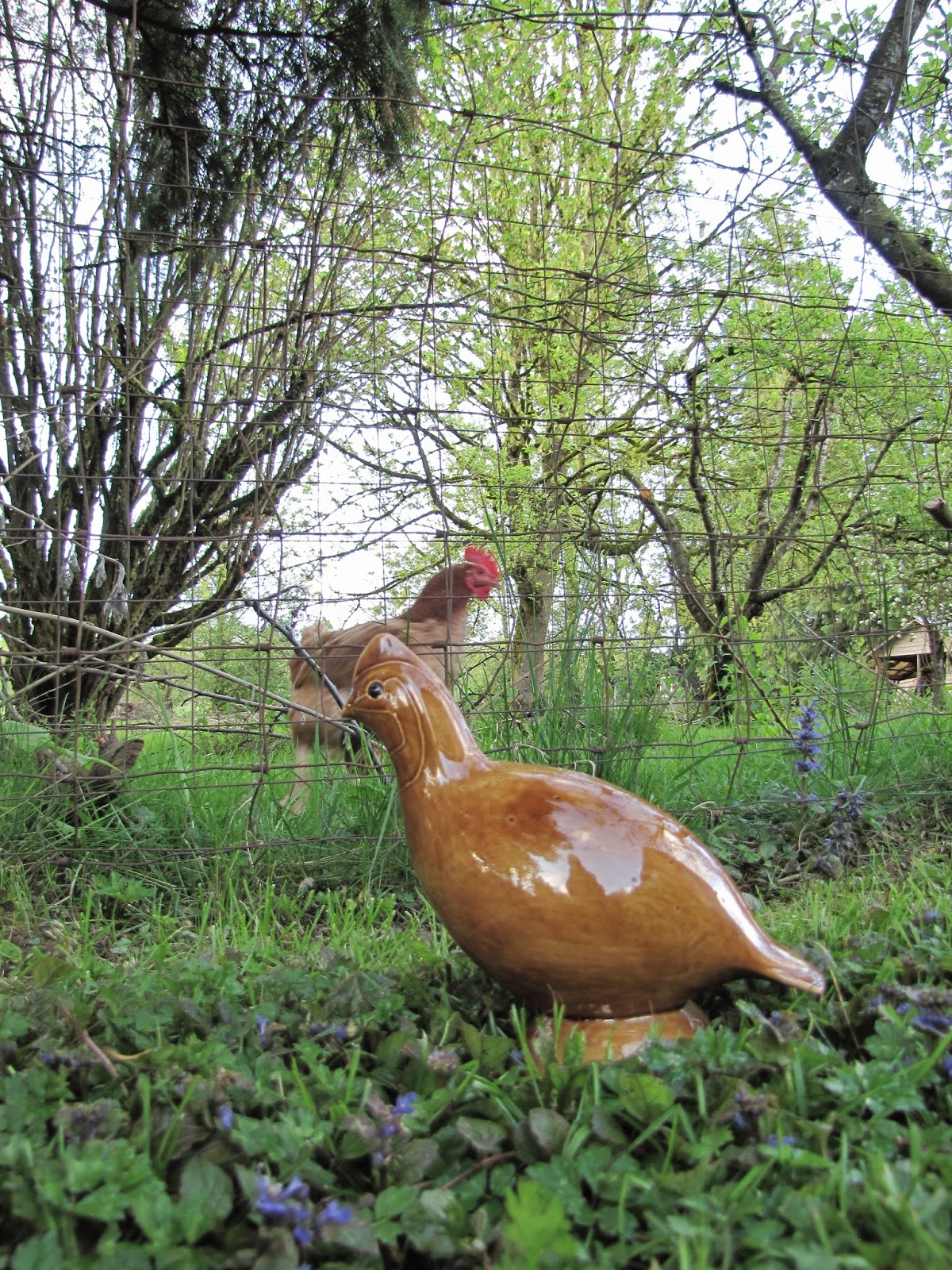 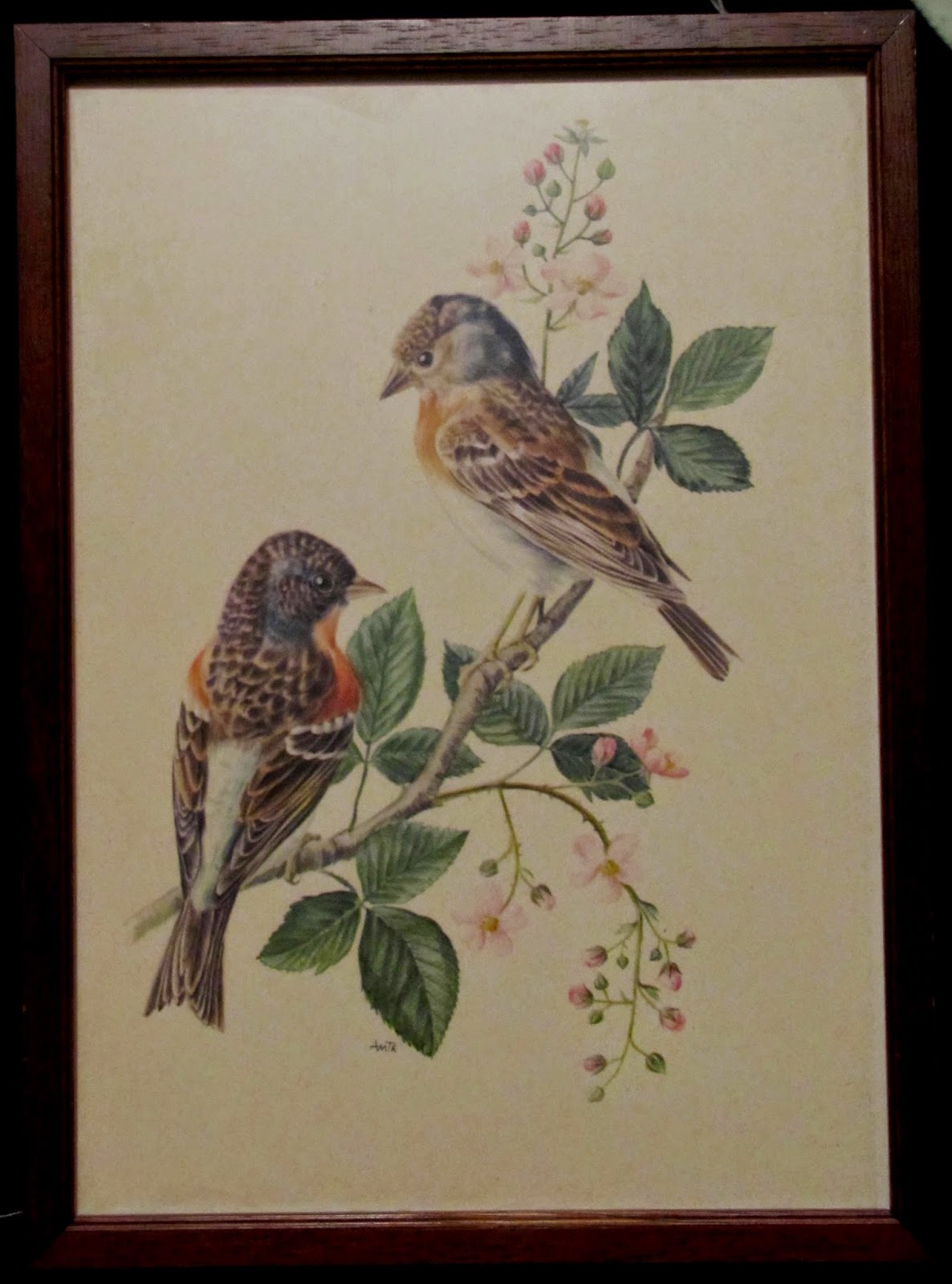