Doing it the Easier Way

I needed to add some organic matter to the soil in the vegetable garden.  We have an endless supply of horse manure and shavings from the horse farm across the road, they even deliver it.  We have to let it sit for a while and rot, and then we can spread it on the garden.  Now the garden by the house isn't exactly accessible for the tractor.  The manure pile is two or three hundred feet away.  It is all downhill, but that's a lot of manure to shovel into the wheel barrow, then push to the garden, dump, and spread.  I had done some of it already by hand, but I came up with what turned out to be a brilliant idea.  I put a couple of tarps on the driveway, and lined up three wheel barrows. 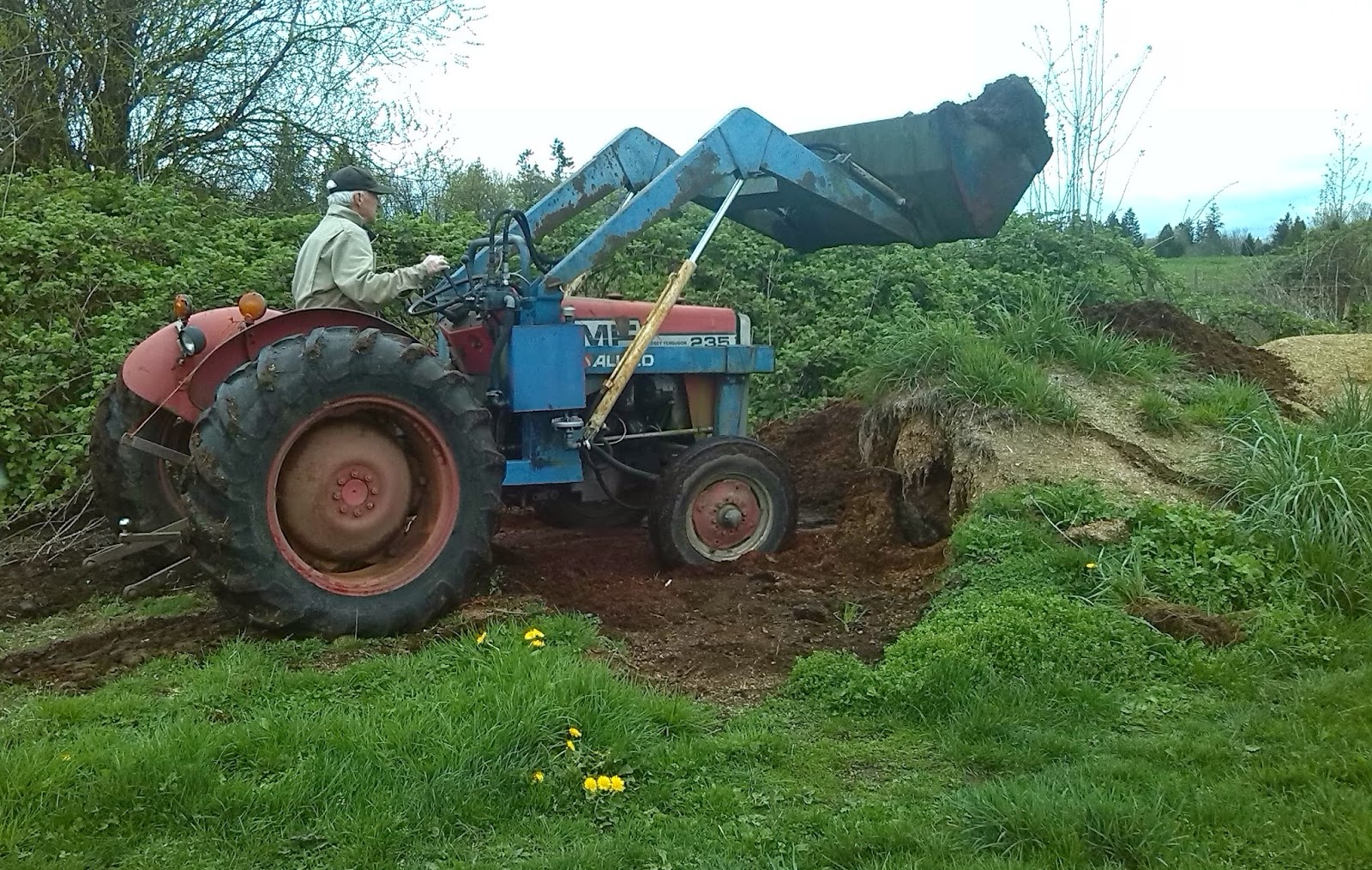 Larry drove the tractor into the manure pile to fill up the bucket, and then drove it down the driveway and dumped it over the wheelbarrows, which nicely filled them up. 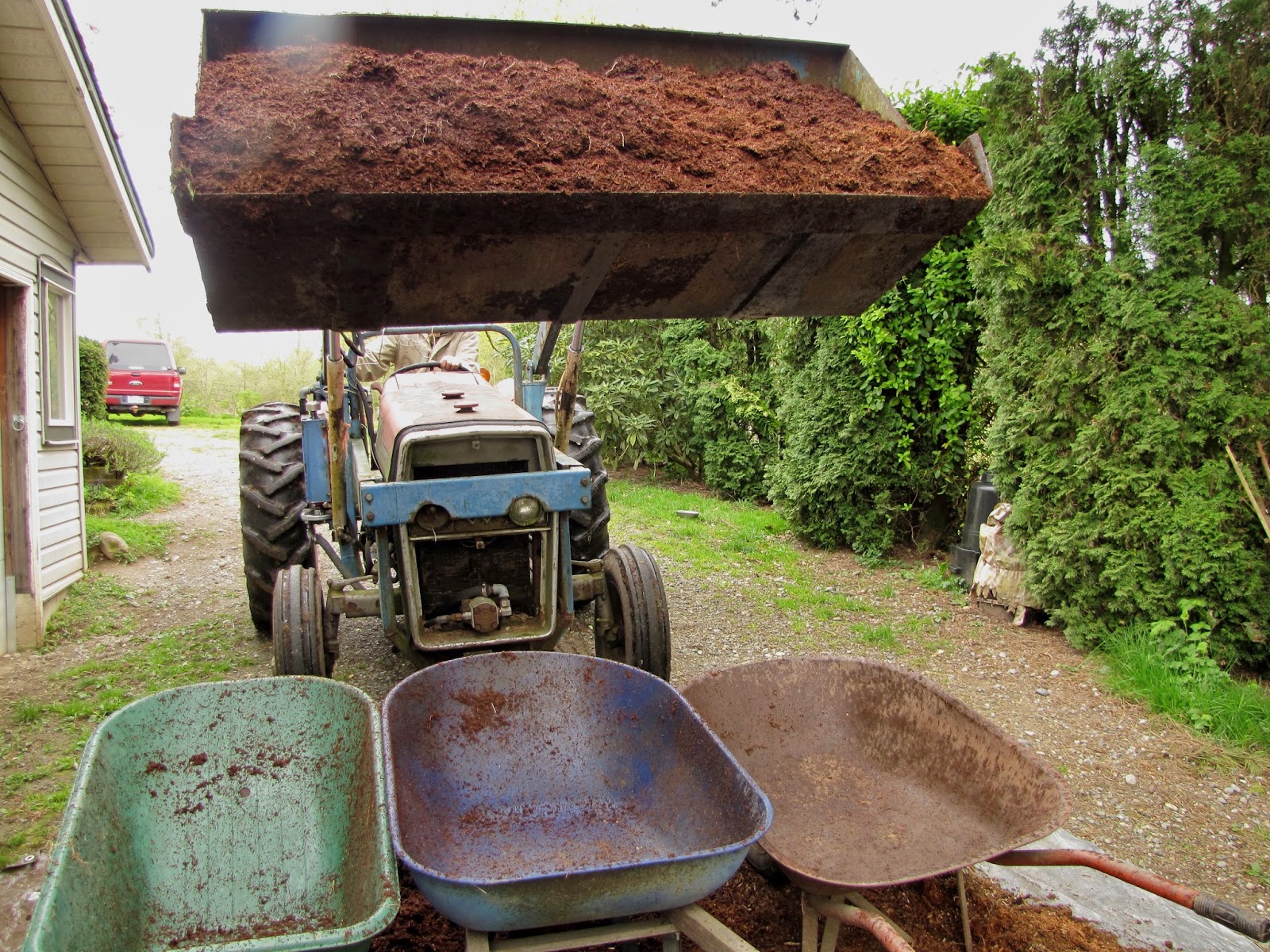 It was up to me to get him to stop in just the right spot, so that when he tipped the bucket, the manure fell into the front of the wheel barrows and then flowed to the back.  It worked great, except for the time I took the photo.  Because I was stood in front instead of at the side, I couldn't tell that he was just a bit too close, until the load started to fall.  It hit the back (downhill) end of the wheel barrows, which them made them tip up onto their handles and spill some of the manure over the back and onto the driveway below the tarps.  The rest of the time it worked just fine. 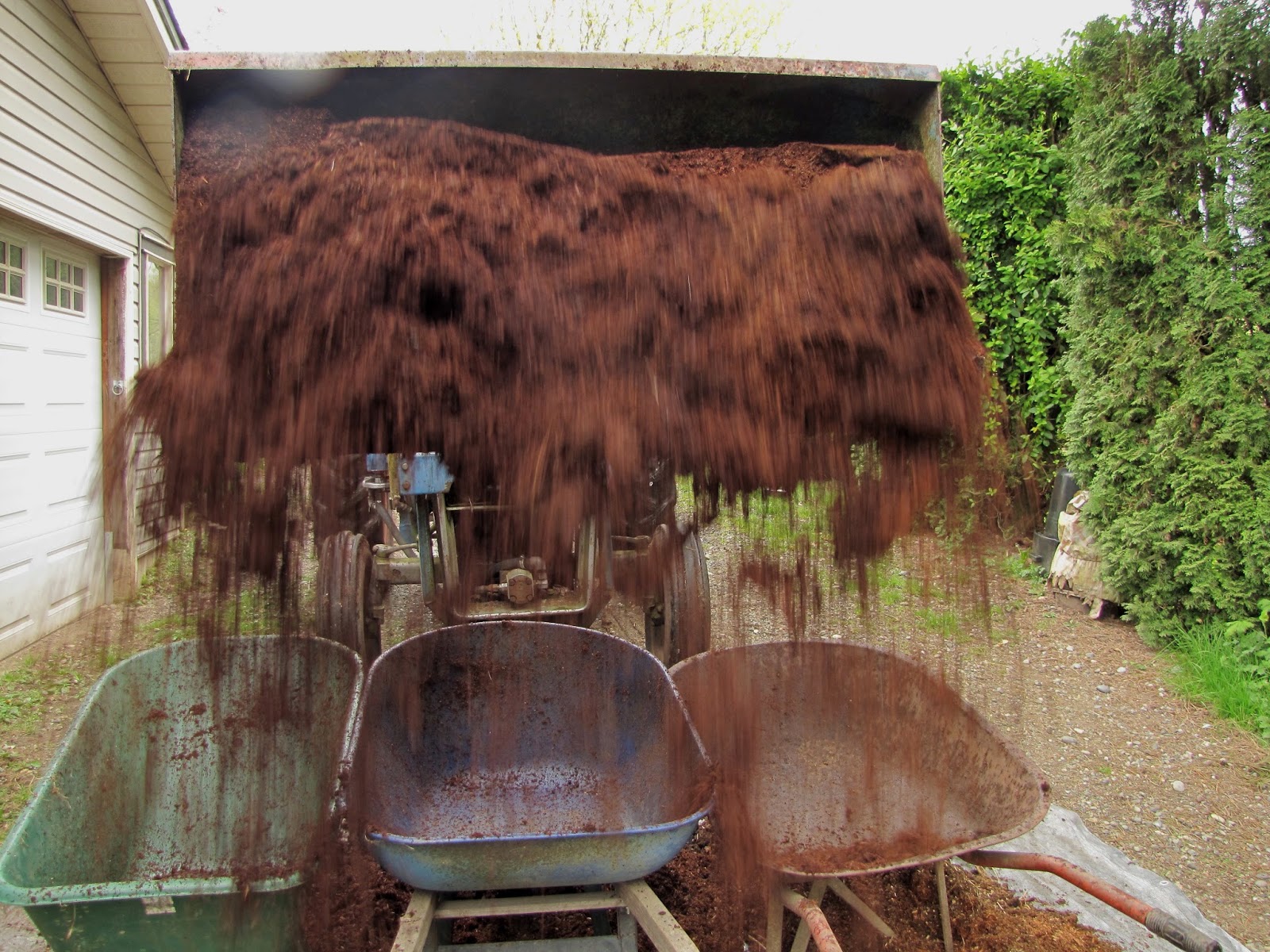 While he was heading back for another load I quickly pushed each wheelbarrow into the garden, dumped it, and lined it back up.  I had a bit of time to rake some of it around.  He did at least 8 trips, so that's 24 wheelbarrows I didn't have to fill up and push to the garden. 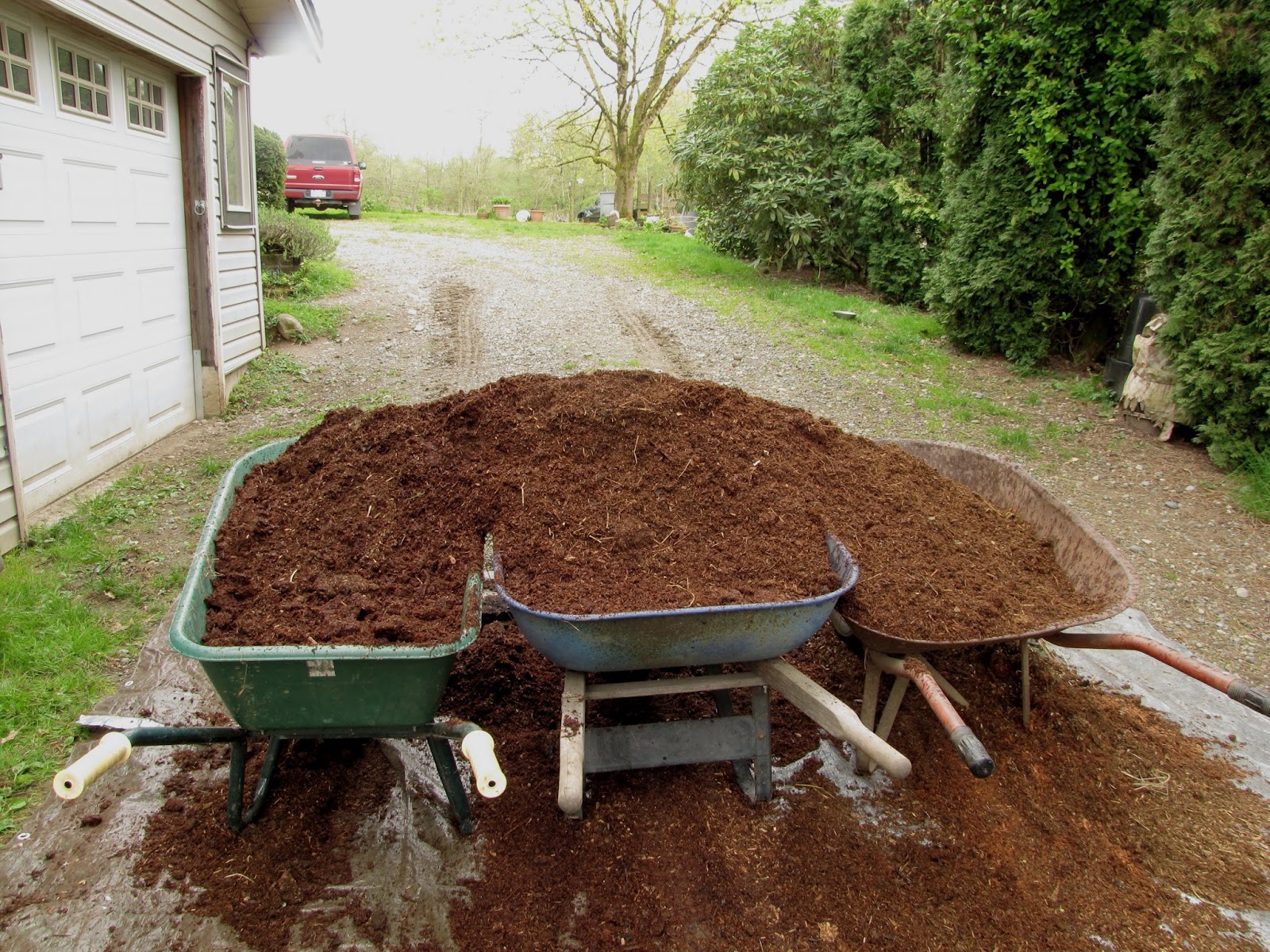 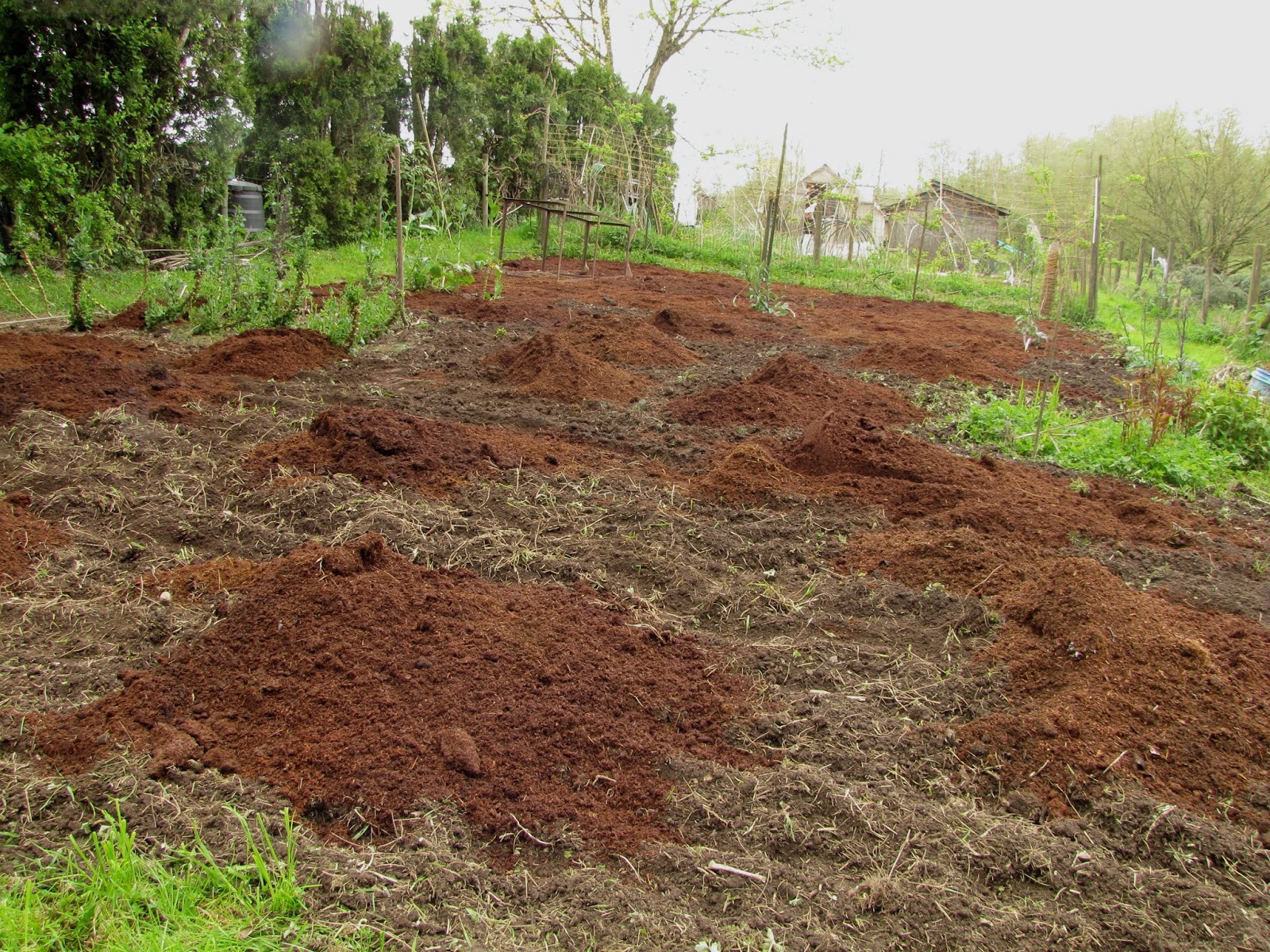 I got it all spread out and started to till some of it in.  The rototiller is spewing blue smoke after it has been running about five minutes, so when that happens I just stop and come back and do some more later.  Larry said maybe some gaskets need replacing.  He's no mechanic, but that sounds reasonable.  I'll get David's opinion on it the next time he is here.  He's the mechanic in the family.

Luna will push her basket ball into the garden, but she knows not to come in and push it around there.  She's waiting for me to kick it back out.  I did, and then shut the gate, because otherwise she will just keep pushing it back to me. 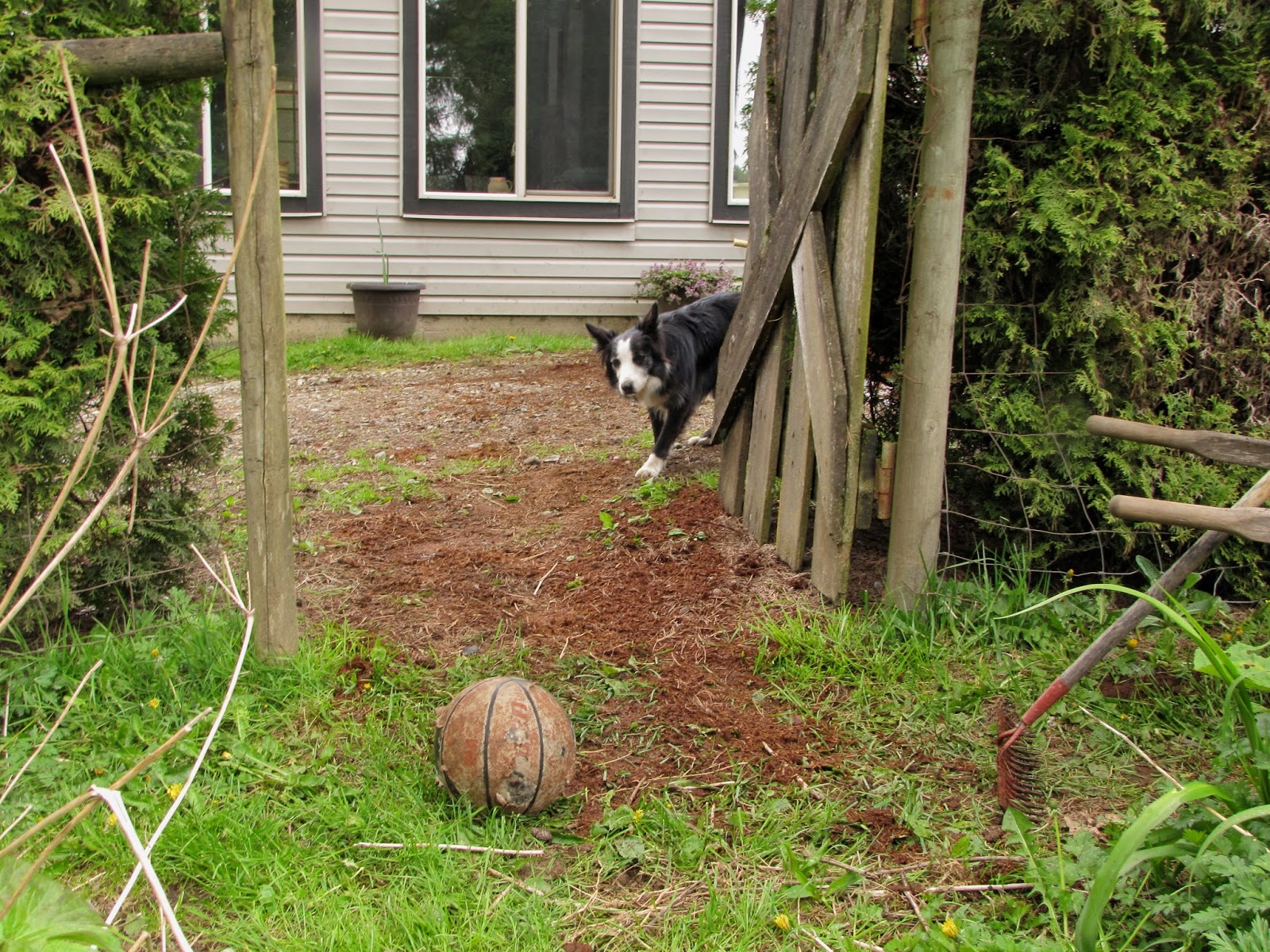 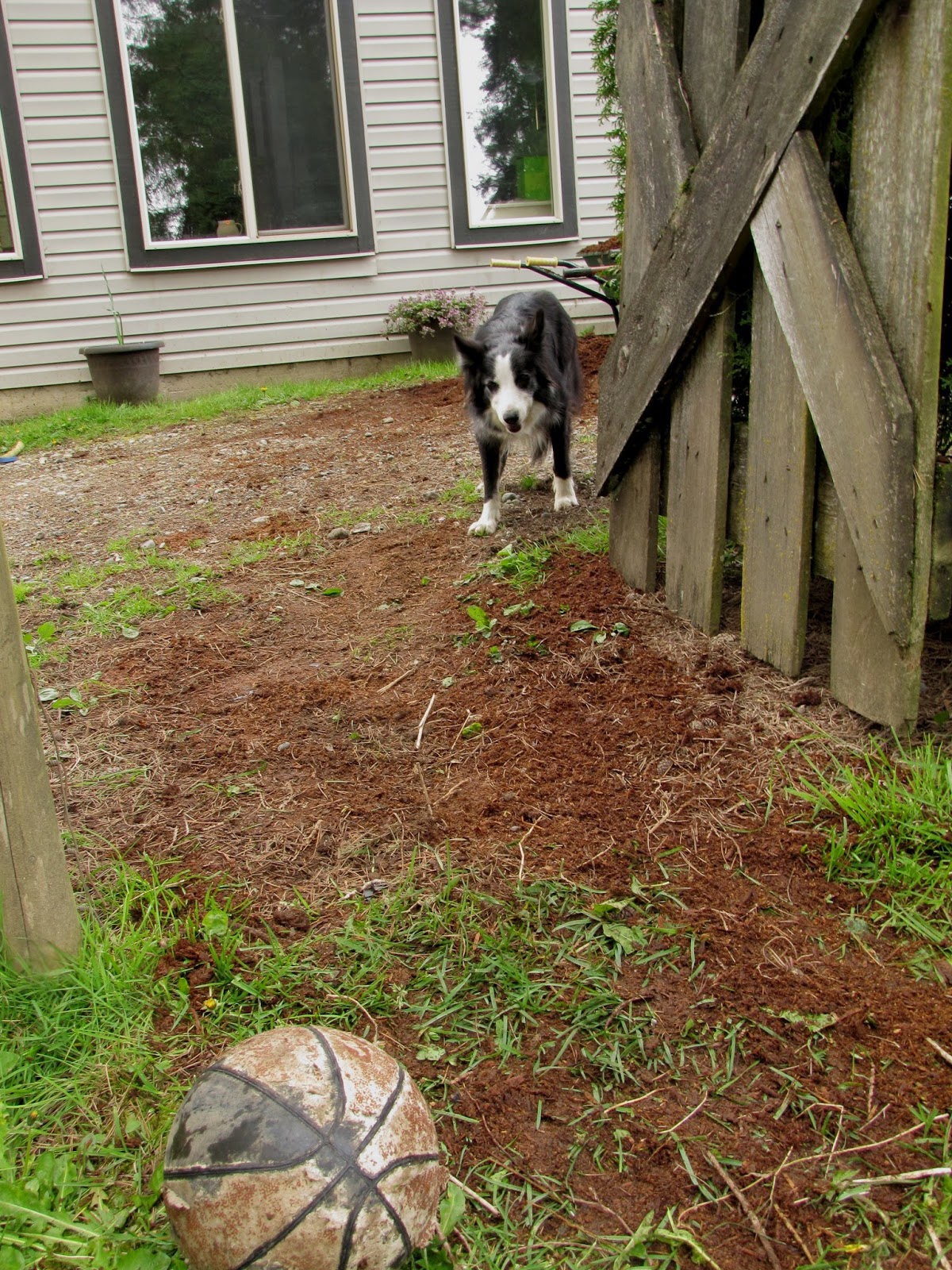 Oh yeah, we are no longer throwing sticks for Jake (or Luna).  A border collie belonging to someone in the agility community here, lost her life a couple of weeks ago.  The story I heard was that it was a bad throw, the dog leaped to grab the stick in the air.  The stick went down her throat and caused all sorts of major damage that was beyond repairing.
So very sad.