While we were staying at Wyndson Cottage, we went to the dog park a few times.  As we were walking towards the off-leash baseball diamond, I noticed what looked like a pile of horse manure on the paved path.  Someone had a horse in there!  After exhausting the dogs with games of fetch, we usually walked around the park on our way back to the truck.  Gave the dogs chance to decompress and  to do their business.  As we were getting close to the truck we noticed all these piles on the grass.  We went over to look.  Piles of what looked like horse manure, but not the same as what we were used to, and they were BIG!  We could see spots were it looked like the grass had been grazed a bit, but we couldn't see any tracks, and the grass wasn't all chewed up liked we would have expected it to be if a bunch of horses had been milling around.  It was a really mystery, but....all I could think was 'free manure, for the garden, FREE ...'  We have loads of manure at Wyndson Farm, but none at Wyndson Cottage. So the next time we went to the park, we took along a garbage can and a rake and a snow shovel.  After the dogs had their fun and a walk, we put them in the truck and got our tools.  I did say to Larry that if he felt too embarrassed, he didn't have to come.  He said he only felt a little bit embarrassed:), so we walked back to the grass and started scooping up piles of manure into our garbage can.  Kind of felt a bit silly, so kept our heads down and worked as fast as we could.

I think part of the reason I felt silly was because I wasn't exactly sure what it was that we were scooping up.  Fortunately only one old fellow with his little dog passed by while we were pooper scooping.  I can just imagine him saying when he got home,  'Martha, you'll never believe what I saw at the park today....'  When we got the garbage can as heavy as we could handle, we staggered back to the truck. 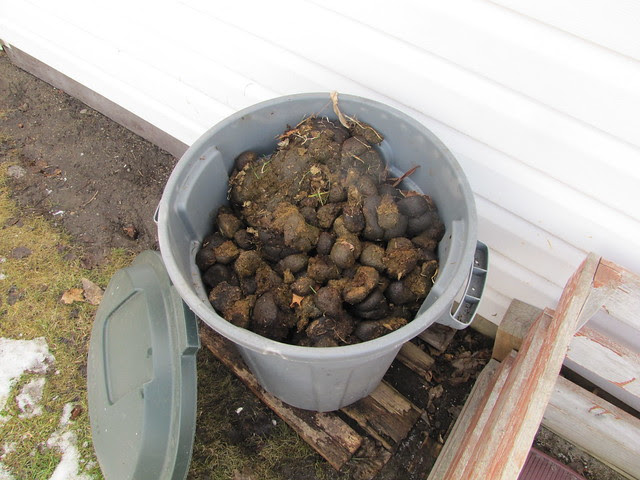 I ended up using it as a mulch around the pathetic little raspberry canes in the back yard. 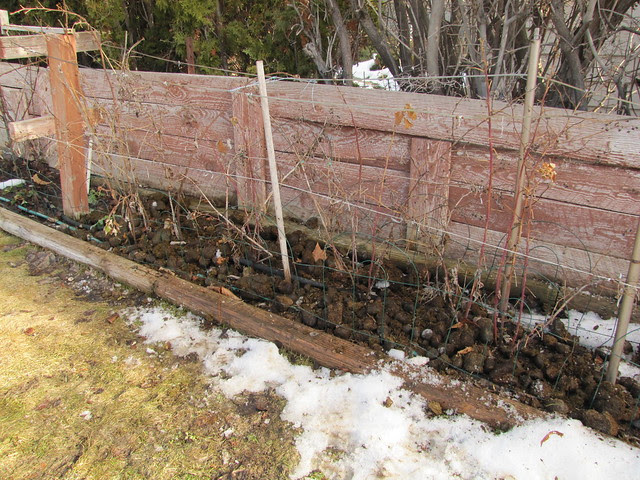 I had decided that it must be a herd of elk that were bedding down in the park at night.  When we got back home, I googled elk droppings, and they look nothing like what we had picked up.  Nor did moose droppings.  It was looking more like it must be horse poop.  Curiosity was killing me, so I sent this email to the rec center, which was right next to where we were scooping.

I have an odd question.  We live in Oliver part time.  On a recent visit, on our way to the fenced dog off leash, we noticed what looked like a pile of horse manure on the path. After walking around the park, we found a whole lot of those piles, and some were quite big, on the grass.  We have a horse, and are familiar with horse manure, and this looked a bit different to what we are used to, well similar, but bigger.  So then we decided that elk(?) must be visiting the park at night, bedding down for a while, eating some grass, and leaving early in the morning.  I've since googled elk droppings, (and deer and moose) and the pictures don't match.  So I'm wondering what left those big piles, (a herd of draft horses?)  Mostly I'm wondering because we collected a garbage can full to add some organic matter to our garden in Oliver, and I'd like to know what it actually is.  If you could solve this mystery for me, I'd really appreciate it:)

Just the other day I got this reply.

Yes, they are from local horses that keep escaping there fenced yard.  This has been an ongoing issue for the Parks for a number of years.  The owner of the horses is just as frustrated with how well his horses can escape.
Well at least now we know what we've mulched with.  I have a hard time believing that the horse owner is powerless to prevent his horses from escaping though.  Kind of hoping we can get another load though the next time we are there.  Larry even said as mu(l)ch!

And after all that poopy talk, here's a pretty picture of the sunrise one morning, taken from the living room window. Too bad it isn't underground wiring.  We had sunshine six of the seven days we were there:) 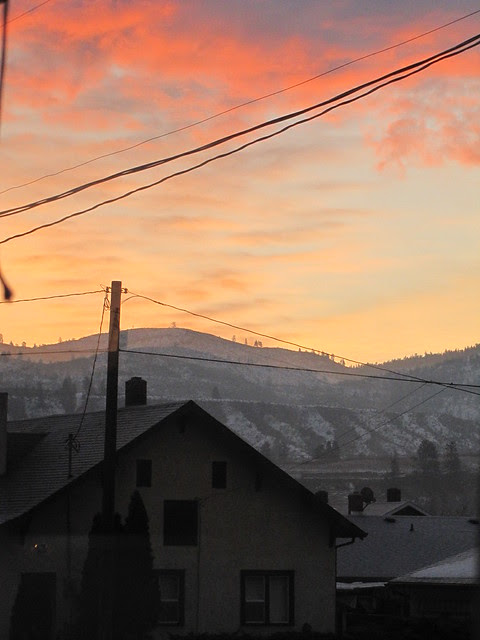