When I'm heading out for my exercise walk in the morning, I don't have a whole lot of choice in where I can go, without getting in the car and driving.  We live on a block that is one mile square.  We're on the west side of the square, the house faces west.  Right across the road from us there is a sort of subdivision (5 acre pieces), and it is a mile  in total to walk around that.   So I head either up or down the road, and even when I get to the closest corner, I can only go one way.
There was a little excitement when we first got started.
See the rabbit? 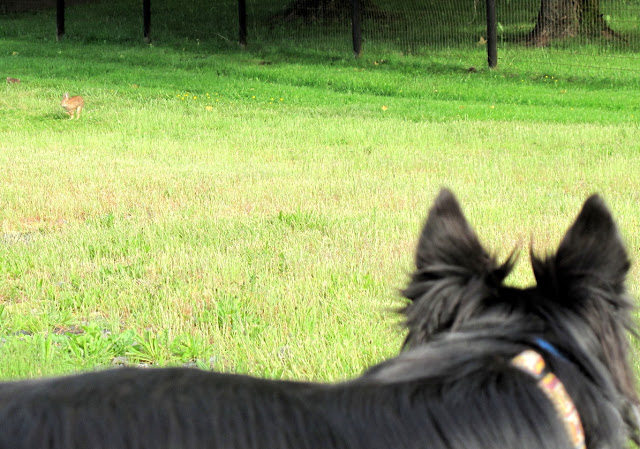 Heading up the 1/4 mile to the first coner 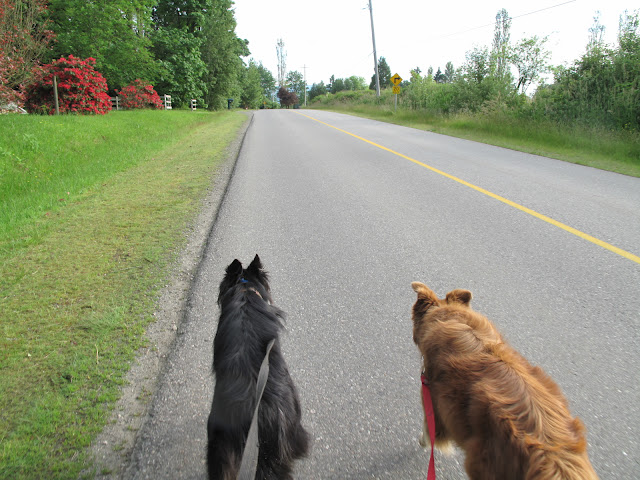 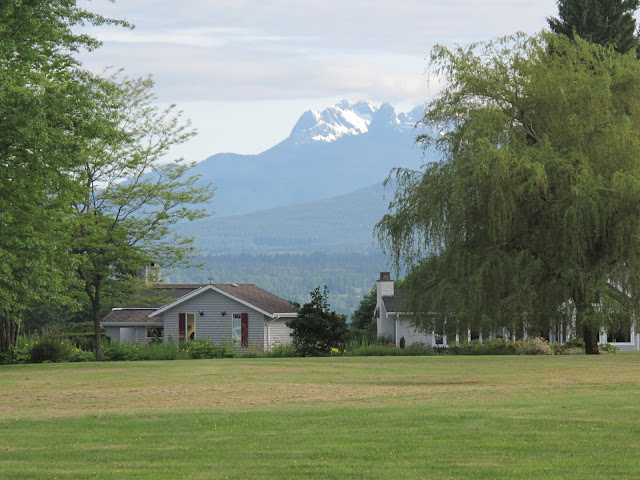 A cute mailbox.  There's another mailbox along that stretch, that has two surveillance cameras pointing out of the ivy on each side of the post. 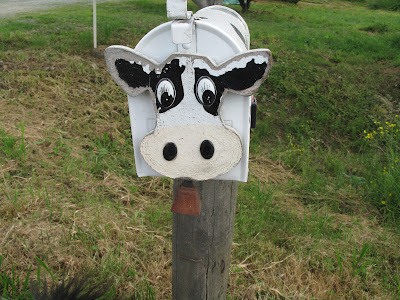 After 1/2 mile of flat, and 3/4 mile of uphill, we reach the highest point.
I was trying to get the hazy hills in the background, and so ended up with the foreground kind of dark.
The road is running straight east.  We walked down past the end of the pavement you can see, and then around the corner for 1/4 mile. 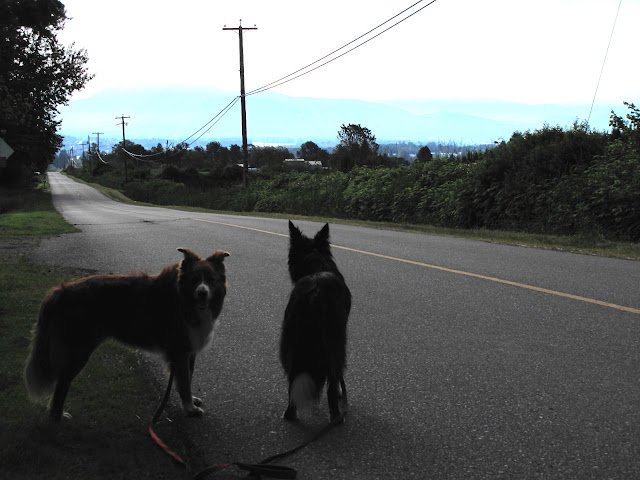 A lovely view down this part.
Mt. Baker to the southeast in Washington. 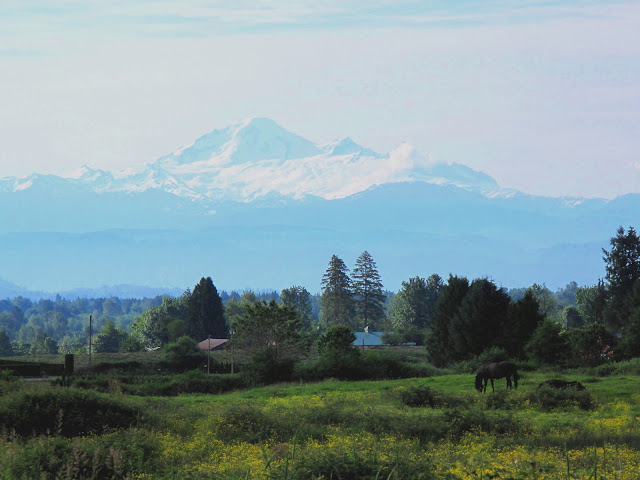 And now we are turned around and heading back up the hill.  Why does the hill never look as steep through the camera?
Mush, dogs, mush!
It was easier to walk up it than bike it though. 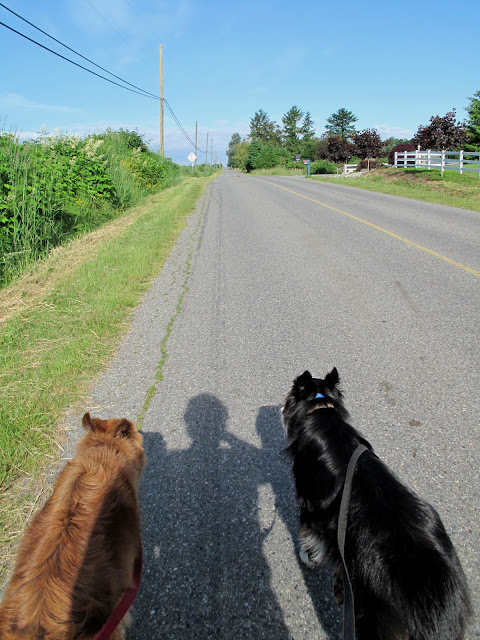 Looking north.
Holstein heifers, of the none mailbox variety 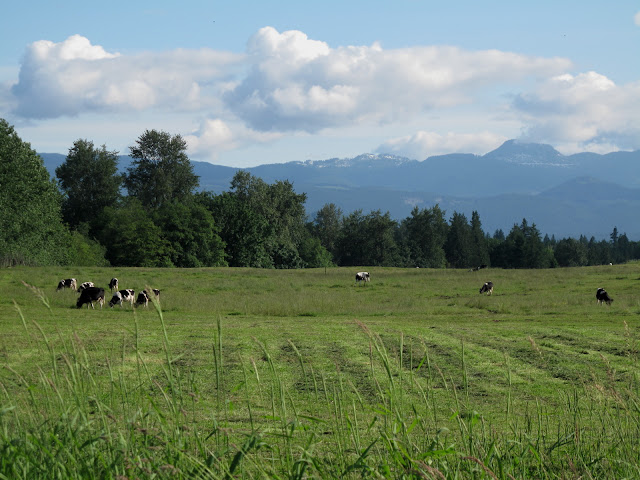 These are rows of hazelnuts.  They aren't really being grown for the nuts though, they are creating the ideal environment for truffles.  And not the chocolate ones either.
This farmer used to raise pigs.
I wonder if he kept a pig or two to dig up his truffles? 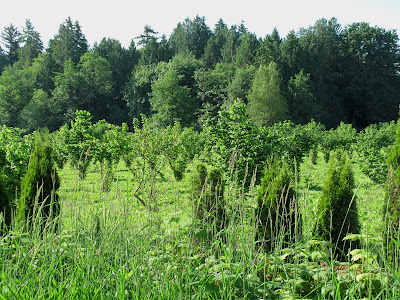 A random poppy that has seeded itself along the ditch. 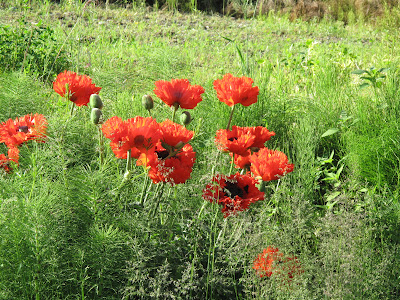 On the way back I did pass Larry walking with his sometimes walking partner and his wife.  Larry walked with me yesterday.  He said I walk twice as fast as them.
I do like to walk by myself.  That way I can go when I want, and where I want and as fast as I want.
I don't think I'm really a team player
On the last 1/4 mile to home, I met a neighbour walking up the road.  He told me that one of our sheep was down and couldn't get up.  I figured it would be April.  So instead of a nice cool down on the last stretch, I figured I'd better run.
Yep, there was April, on a side slope, on her side, her back facing down hill, and her legs stuck out at a 45 degree angle.  I heaved her upright, she toddled up the hill, peed, shook herself, and a few minutes later had started to eat. 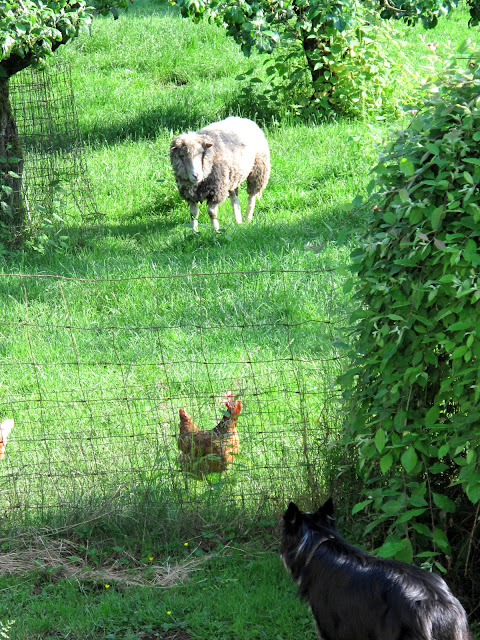 When Larry got back he said she had been up and eating when he left, so I figured she'd probably been stuck no more than 10 minutes.  No harm done.
April, now 15 1/4, is actually moving around better than she was a month ago.  She not quite ready to kick the bucket yet.

And for the dogs and I , another 4 miles done.

Update:  Calli is doing quite a bit better.  I have made a chiropractor's appointment for all the dogs though. It will be interesting to see if she finds anything 'different' in Calli's back.
Posted by Karen at 10:07 AM