Well, for a couple of days.  Tomorrow we are back to clouds and showers, and the forecast continuing on for a few days isn't any better.  Hopefully we'll see the sun in there a little bit at least.
It's been such a cold miserable Spring that the garden is way behind last year.  Finally though, things have really got growing.  Of course the weeds have had no problem with our weather, and have taken over.
Finally the worst of the weeding is done in the vegetable garden at least.
Larry goes for quality over quantity.  He worked along the edge of this bed, and I'll promise you there's not a weed root left in there, and the soil is all fine and well worked over.
Jake is always waiting close by, just in case Larry would like to take a break, and throw that frisbee for him. 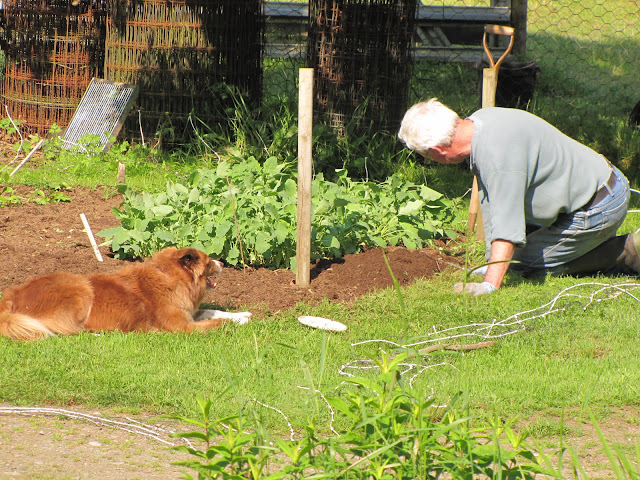 Here's what the bed looks like with all the weeds out.  You know that quality/quantity bit, well I weeded out the middle and between all the veggies.  Larry hasn't got to the edge on the left yet.  Actually he never got to it.  He took Luna to agility on Monday night, probably the first time he's ever gone without me, and I did a 'quantity' job on that left edge so I could put the fence back up.  David walked by and commented 'wow, that garden has sure come up'.  I said you couldn't see anything before because it was all a mass of weeds.
So that's kohlrabi at the far end, then some beets, carrots, and more beets close up.  The beets didn't do very well, well they should have been thicker than that, so I've put more seeds in to fill in the bare spots. 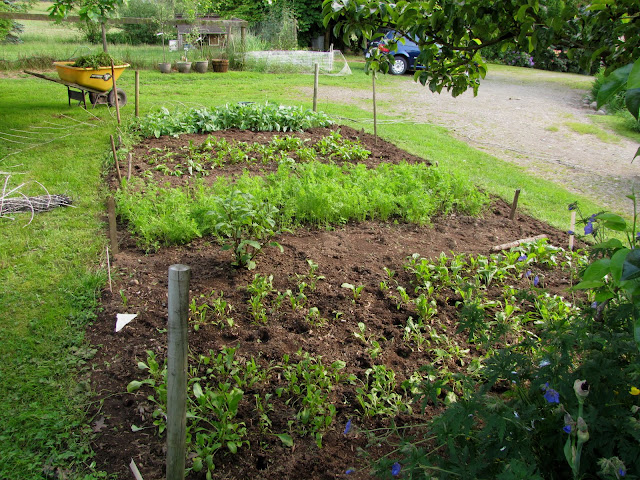 Just behind me at the corner of the barn, is a lovely little clump . 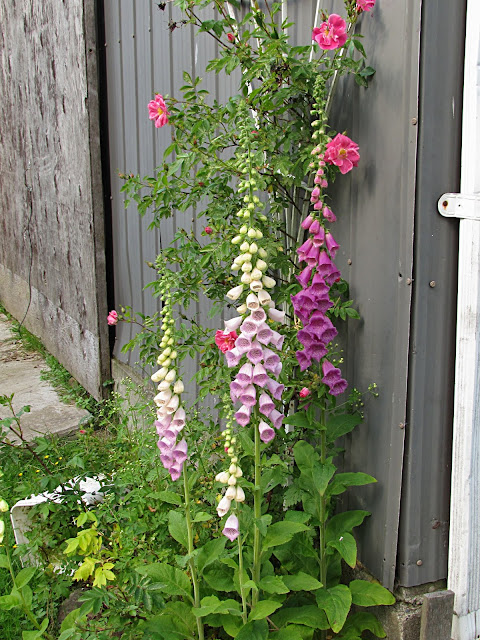 The foxgloves really are beautiful.  Who knew they were so hairy though.  You just have to see them from the right angle and in the right light.
Kind of like my chin, when the light is coming through the bathroom window a certain way.
It's an OMG moment.
How long has that hair been sticking out like that?
Isn't your family supposed to tell you about those sort of things? 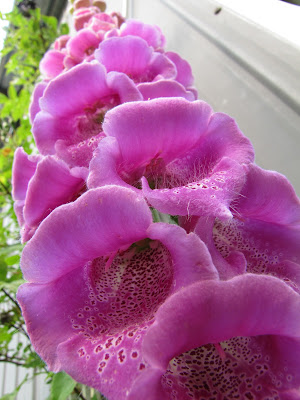 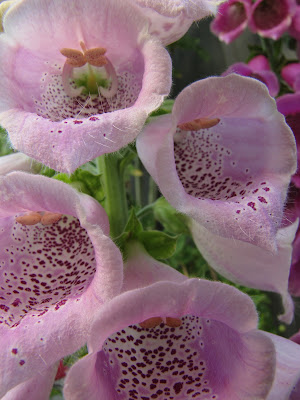 Down in the main vegetable garden it's sort of the same kind of thing.  Some things were seeded a couple of times, and still the beds aren't nice and full like they are supposed to be.
Radishes at the bottom.  They have mostly bolted now, and even before that, quite a few of them were pithy inside.  Don't know why I bother with radishes, they are never that successful.  Next is spinach, which didn't germinate well.  The mixed lettuce isn't too bad, the chard after that has been seeded for the third time.  The arugula is pretty thin too, and then there are onions and broad beans at the very top.
The peas are to the left, they are flowering well and will probably flop over any day, as they've grown a couple of feet higher than the wire. 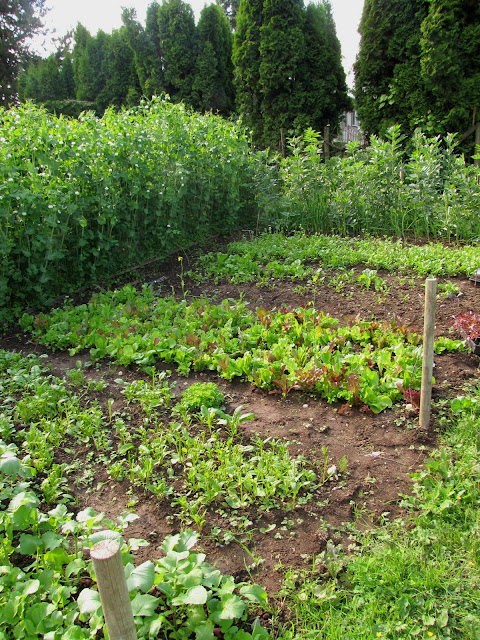 The second bed of potatoes I put in look great, and I did find one potato under there. 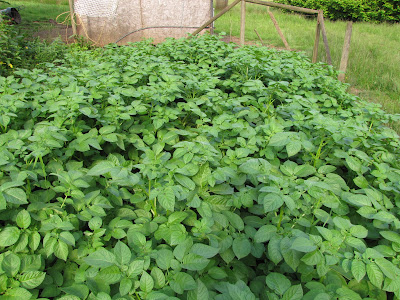 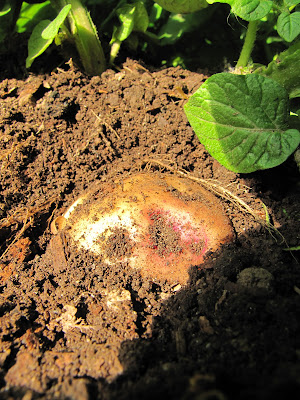 The broccoli is slowly getting there.  I can finally see tiny heads forming in the center 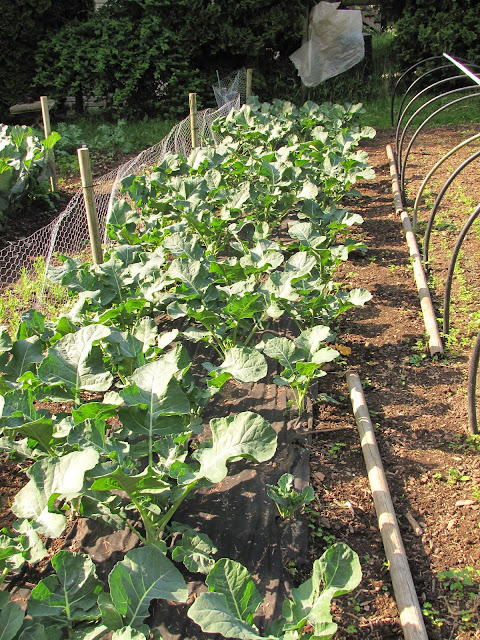 The cabbage is looking fantastic, and I stole a couple of leaves to chop up in a stir fry last night.  No heads forming yet, but they look so healthy.
The kale too has finally put on a growth spurt. 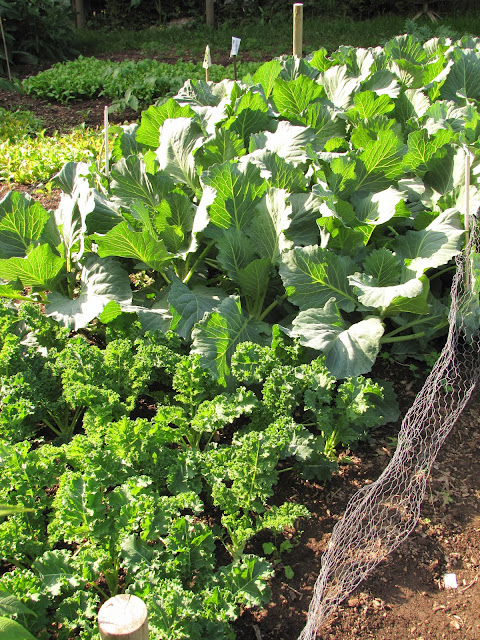 Further over there is more arugula (foreground) planted, and that will be ready to pick for this weekend.
There's also more lettuce mix planted the next bed down. 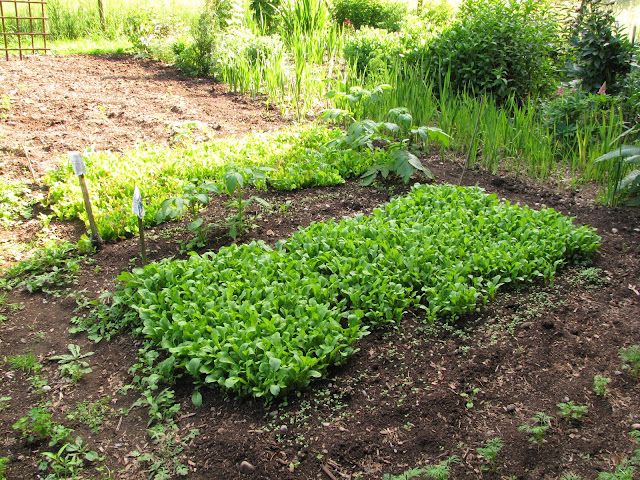 Pride is on the other side of the fence.
There are no vegetables within his reach. 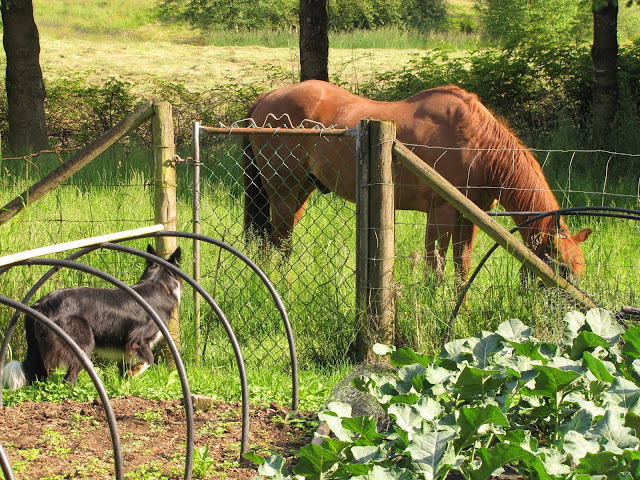 In the greenhouse I've got half of the tomato plants in, and have to find somewhere to put the 'junk' on the other side of the greenhouse, so I can get the rest in.
Okay, it's not all junk, there are some plants there too. 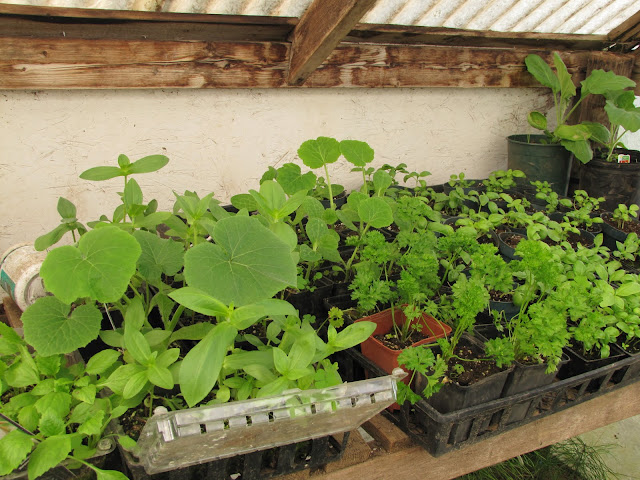 The mouse traps have been retired for the season.  I did catch two mice up on the bench with them.  After that there was no more damage to the zucchinis. 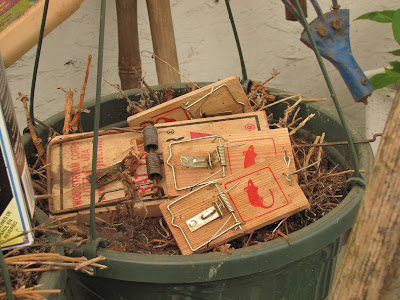 Up at the other garden, where I've been trying to plant the dahlias, well it's been a battle with the slugs, and so far they are winning.  On Sunday before we went to the market, I picked off 33 slugs on or next to the dahlias, and another 10 within two feet.  Add that to the  60 or more I picked off on Saturday when it was raining....
I'm thinking that the tide is turning in my favour now though, or maybe that's just wishful thinking?
Posted by Karen at 7:06 AM