We just got back this afternoon from a holiday.  I'll bet when we first told our egg customers that we had to switch the egg delivery Sunday because we were going to be on holiday, that some of them had visions of us sitting on a warm beach, sipping whatever it is you sip in warm places.

Well nope, we were off to the Okanagan and our little place at Oliver.  If anything a bit colder than here, but much drier.

On our drive out, we stopped off to see the Land Rover club event.  It was right on our way, and David was there with his Land Rover on display, as well as about 70 more Land Rovers belonging to club members, include one of our neighbours. David had Tucker with him, but when we were there Tucker really just wanted to curl up on the seat and sleep, and I didn't take any pictures.  But I saw this dog, his/her name was Chase, and he/she liked to sleep on the spare tire of his/her owner's Land Rover.
How cute is that?
Maybe David can train Tucker to do the same thing! 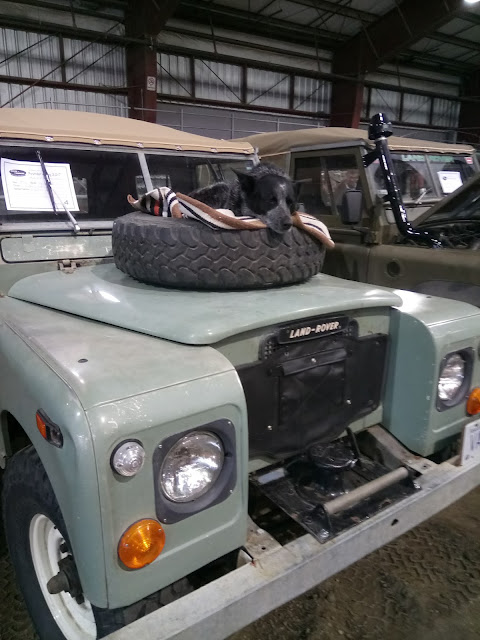 Anyway, it was the usual at Oliver.  We hadn't been there since the beginning of November, which is the longest time between visits since we have had the place.  All was good, which is always a relief.  David and his girlfriend had been there right after Christmas, and the furnace decided to act up.  Being mechanical like David is, he figured out the problem and bought the new part and all was well.  Lucky us, because if it had happened when we were there we would have had to call the repair guy.

So what did we do at Oliver?  Well since we had Jake and Luna, we did a LOT of walking.  Mostly along the dyke next to the Okanagan River.  Parts of the trail are paved, but the majority of it is not.  The first couple of days there were kind of gray, but after that there was lots of sunshine. 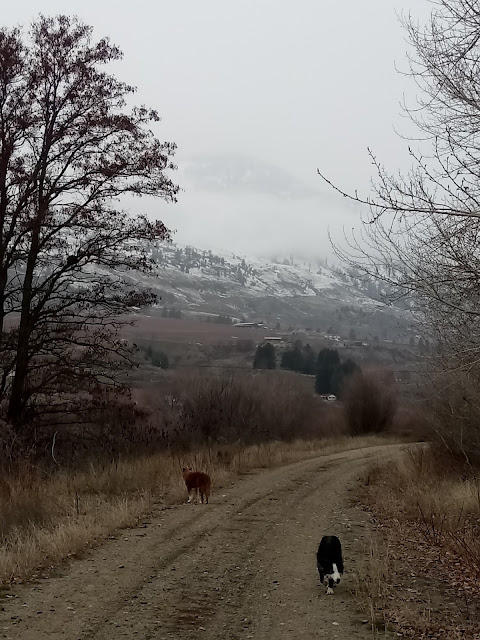 One day we saw all these tracks, loads and loads of them, and they went a long way along the trail, like someone was walking their unknown beast.  When we got back to the house I asked Professor Google, and determined they must be raccoon tracks.

It's not the first time I've used money to measure something.  Our bills measure 6" x 2.75 ", which is a handy thing to know. 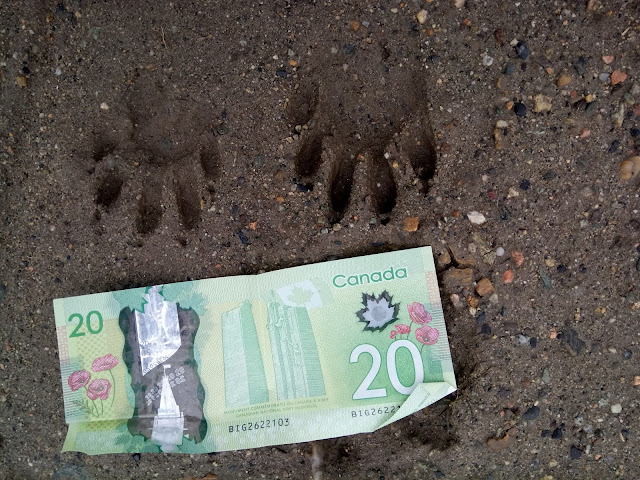 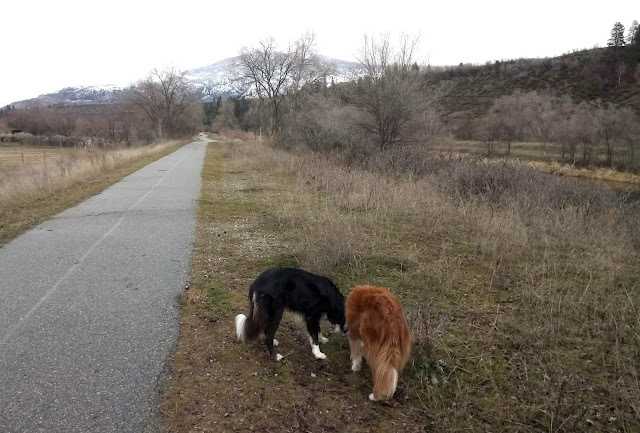 One morning we made a trip to the dog park.  I think that's the first time we have been there since Calli has been gone.  The dogs love to go and play fetch over and over, but really it's hard on their bodies, that repetitive motion, so now that they are older, we seldom go there.
Since I'm training for the 10km Sun Run again, and I needed to do a run that day, I thought it would be easier on me if we didn't walk so far in the morning.

Luna didn't care though.  This is how she looked after the dog park in the morning, then doing a 5 km run with me.  Her 'you are not going out of this door on an adventure without taking me with you' look. 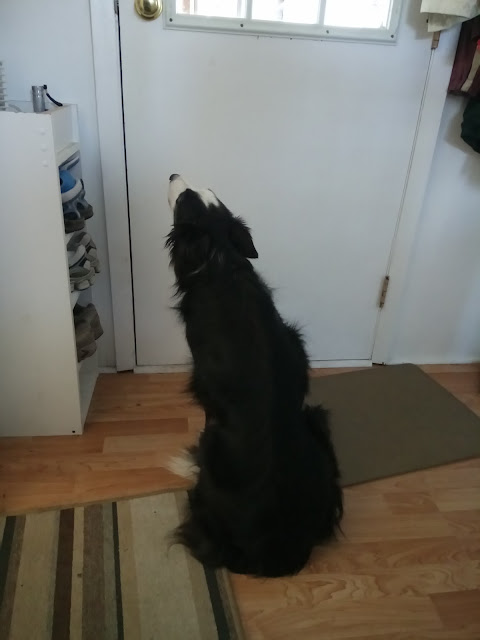 Sorry Luna.
We left her behind and went for a bike ride.
It was such a nice afternoon.

Tuc-El-Nuit Lake was still frozen. We joked about trying to ride on it with our bikes..... 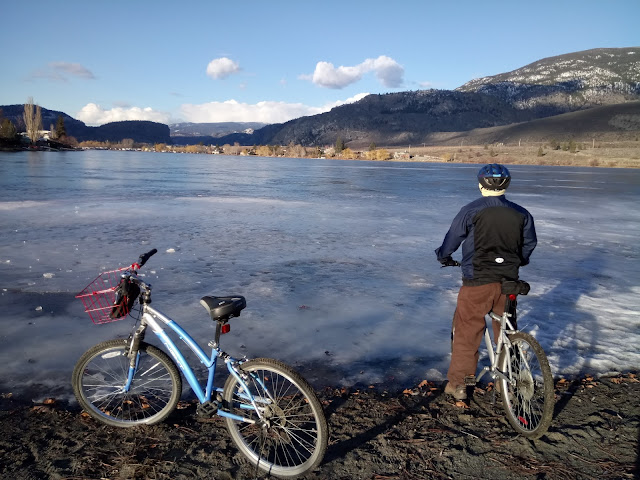 ....but thought better of it and continued on to the park.
There by the Community Centre was a Little Free Library!
It's just new I think.  Larry found a book, and then last night we walked the dogs that way and added five more books to the shelf.
Jake and Luna were sure they were going back to the dog park....Sorry! 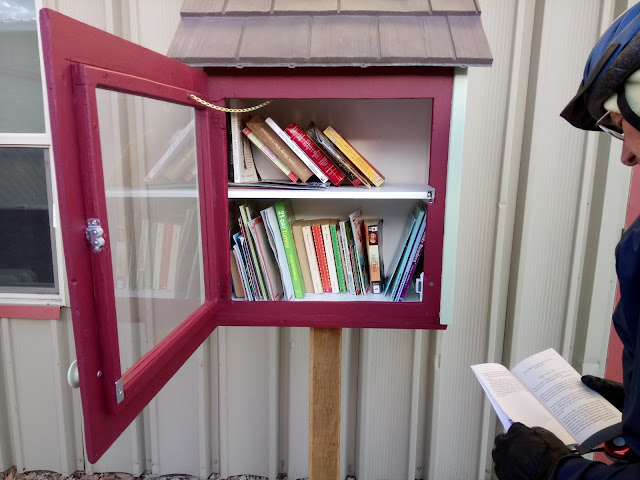 One day we drove up to the back side of the mountain closest to town, and then walked uphill for a change.

See the road that runs in a straight line at a bit of an angle about Luna's ears?  The truck is parked  the side of the road there just behind a tree above Luna's right ear.
Just take my word for it! 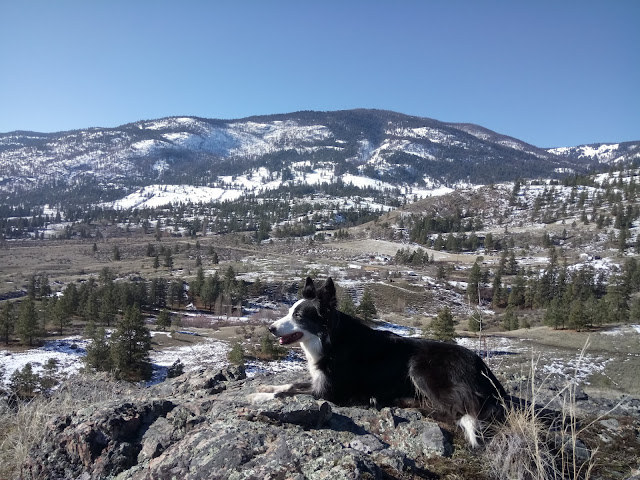 Slightly snowy mountains all the way around us.
Very pleasant there in the sun.  Just needed a comfortable chair and a good book! 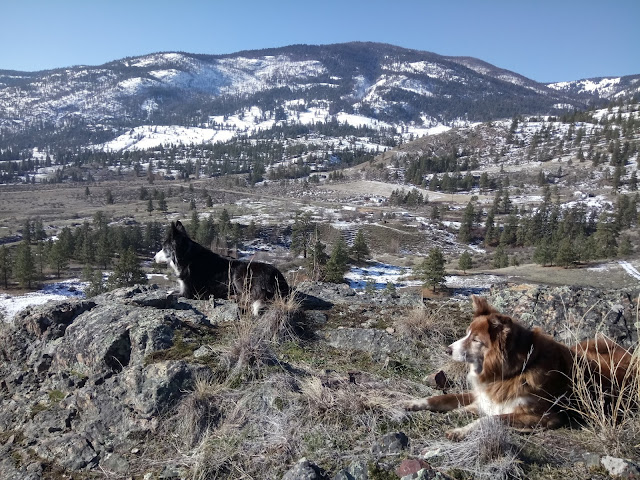 All that grey on sweet Jake's face is making him look so old.  He's 12 and a half. 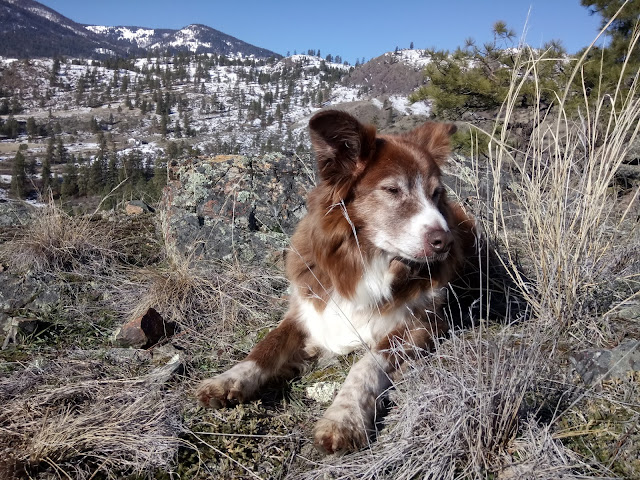 I had taken 'work' with me, to Oliver, so managed to get 15 aprons sewn while we were there, as well as oranges prepared and cooked to soften the peel, for three batches of marmalade.  As usual I had thought I would get much more done than that, but didn't, so brought one bag of apron fabric home untouched.

One day we went on a dog free adventure and met two of Larry's brothers and a sister-in-law in Summerland and had a tour around and visited a couple of interesting spots.

We were in Oliver for seven full days, which is one of our longer visits.  This morning we woke up to a dusting of snow, but thankfully it didn't really affect our four hour drive home.  There was a bit of slushy packed snow on the road for about a 20 minute section, but that was it.

Looking forward to going back again in April.