Preparing For The Storm

What a difference a blue sky makes!  Yesterday was beautiful.  Our slog through the bush was easier, as even though we got a few more inches of snow overnight, the trail was protected from the wind by the trees, so was still there. In some of the open areas the trail was blown over again, although if you guessed right and managed to step on where the previous trail had been made, your feet didn't sink in as far. 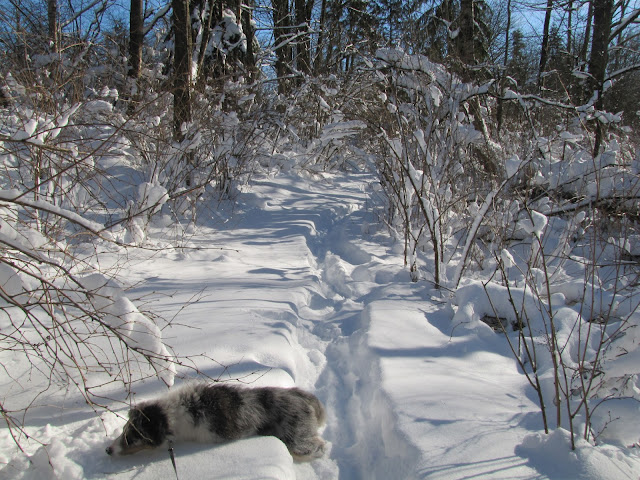 Larry carried some hedge trimmers along to cut back some of the overhanging stuff that likes to whip you in the face. 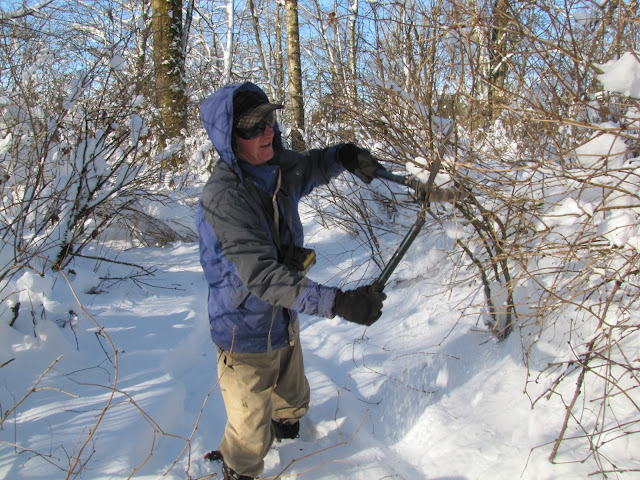 Tucker was on leash today because it was too easy for him to disappear after Luna, since he wasn't having to flounder through the fresh snow.  Actually, we had forgotten the leash yesterday ;-) 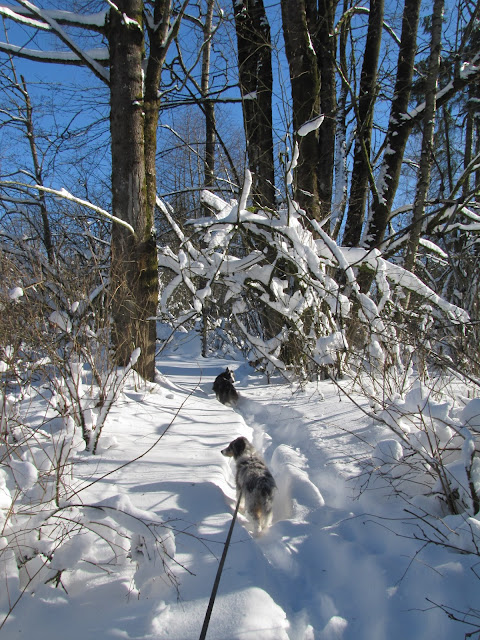 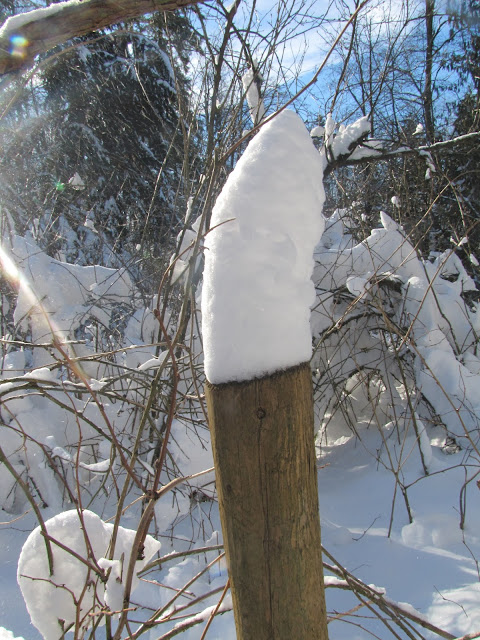 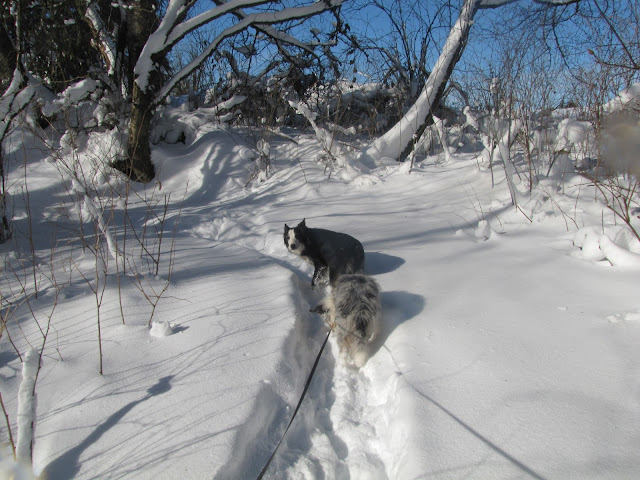 It was just Luna and Tucker on the walk.  As 'Luna Crone' commented on my last post, Jake did not look happy to be out there.  She was right.  Yesterday morning as we were getting ready to go out, he went and laid on one of the dog beds.  We asked him if he wanted to go for a walk a few times, but he didn't get up, so we left him in the house.  He has already been out earlier, and knew how cold it was, and made his own choice.

The view to the north.  There is a whole range of mountains back there, but our neighbour's trees block most of it. 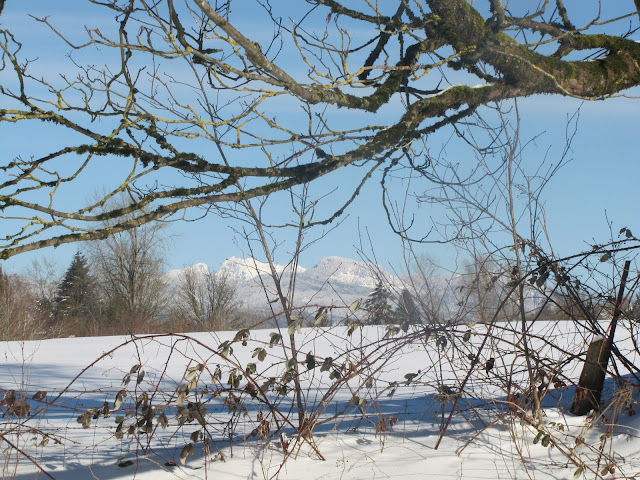 And our neighbours to the south, you've seen this view lots of times. 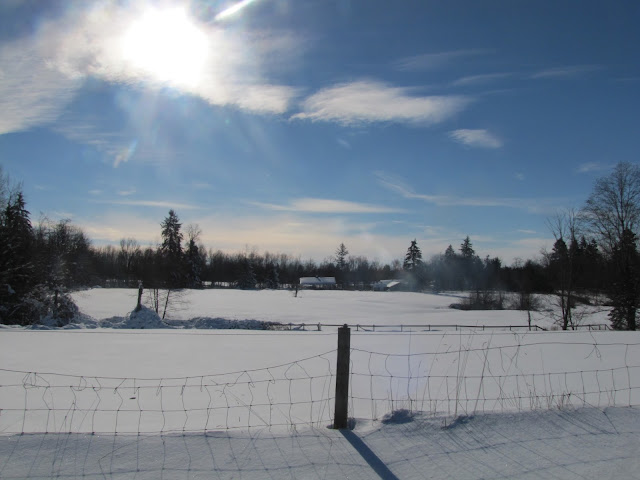 Our gingerbread house, which is pretty to look at, but with the weather forecast we have, is a bit  scary. 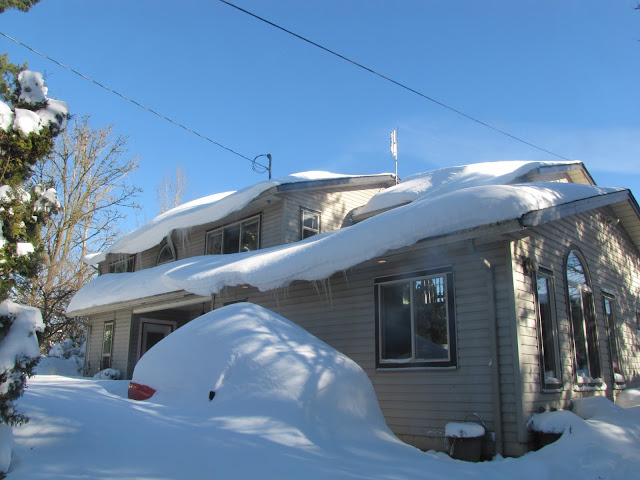 A photo often does not do justice, and in this case it is hard to tell that some of those drifts on the roof come half way up my thighs. Imagine that snow, drenched in rain and ice, and the weight of it all. Scary to think about, so there was only one option.  I was up there yesterday shovelling it off.  Larry was there part of the time, he was helping David get the tractor out before that. David only had two hours of classes yesterday, lucky us!
Our tractor is not four wheel drive, so is next to useless in the snow.  The guys did manage to get it out and jerry rig some tire chains out of long chains we have.  David spent 4 hours working with the tractor and got our whole driveway cleared.  Positively amazing!  The homemade chains made enough difference so he was able to work on the slope and not get stuck, or not much at least. 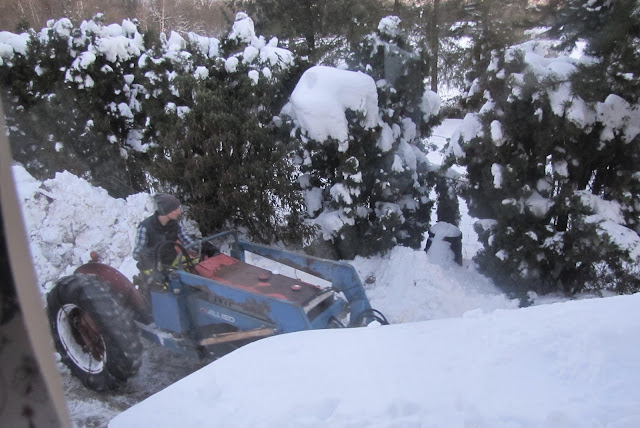 A close up of some of the icicles. 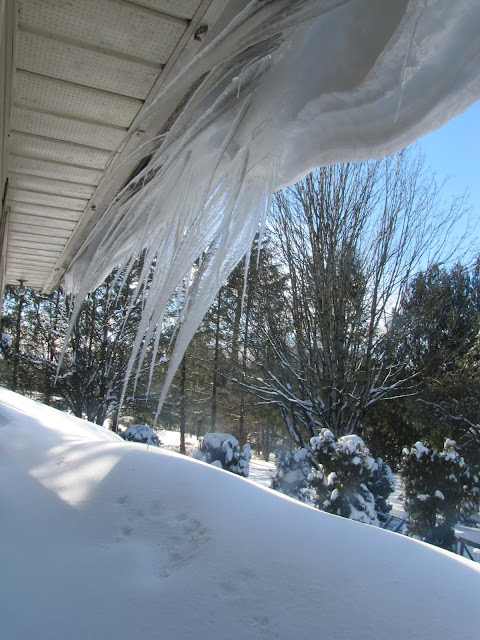 Like stupid fools we watched them get bigger daily.  Our wood stove chimney goes through the attic, and so warms it up a bit, and we get some melting and the icicles.  The biggest ones are three feet long.  They remind me of Tucker's teeth.  Never have I felt such sharp little needles.  He's not particularly bitey, but just catches my thumb a lot when I am giving him treats, if I don't do it just right.  In fact a few weeks ago I got an infection in that thumb and had to give in and get antibiotics to get rid of it. I try to be more careful now.  I will be glad when those puppy teeth fall out.
Good thing he is so cute!

So back to the icicles.  I was working on that roof below them. Then I knocked all the icicles down, and started chipping away at the overhang, which had a serious ice build up. I was trying to get it down in small pieces, but unfortunately a massive piece came down and broke one of the skylights.  Oh sh*t!!

So along with cleaning the roof off I had to temporarily patch the skylight and cover it up and then clean up the mess below in the house.  There was a big piece of ice in there that would have done serious damage if it had hit someone.  No damage there though other than a lot of melted ice
and snow on the floor.  Of course, if I had been smart, I would have protected the skylight before I started knocking the stuff down overhead. I learned a tough lesson.

When we added on to the house years ago, I installed those skylights, probably because I decided that we needed them!  I worked hard to make sure the roof didn't leak around them, went overboard with the flashing and waterproofing, and was proud that they have never leaked.  So I guess it will be my job to fix this one.  It looks like we can just unscrew the top frame from the bottom and just replace the broken part. Sure hope that is the case!

David dug out our car and the parking spot.  Then we moved the car out and shovelled snow off the roof into the spot and then had to shovel some of that back out so we could get the car back in so David could get by with the tractor. This morning we have finished the family room roof (right above the car) as well as the dining room roof above that, and started working on the old and highest part of the house.  I didn't think that was as bad, but the drifts are as deep up there. 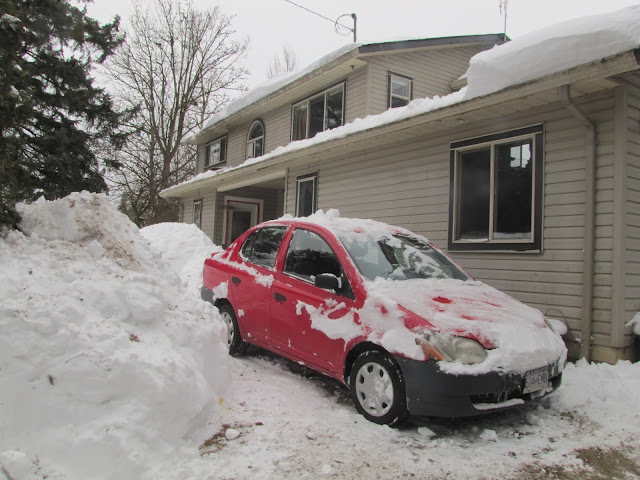 Looking up the driveway from below the gate 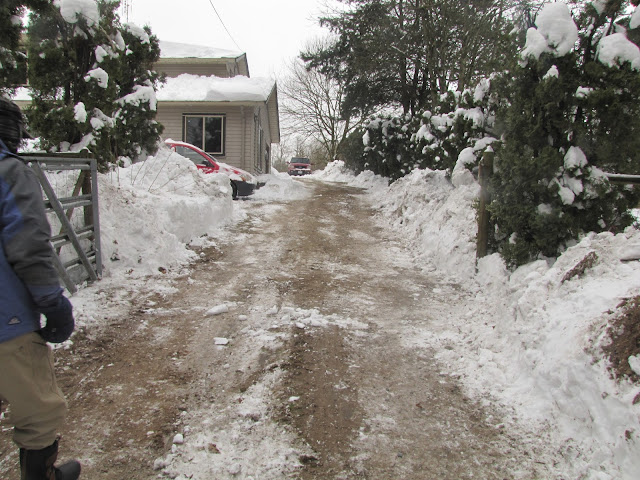 At the back of the house.  I think that pile will be there for a while.  From the driveway we step up a foot onto a packed path to the house. 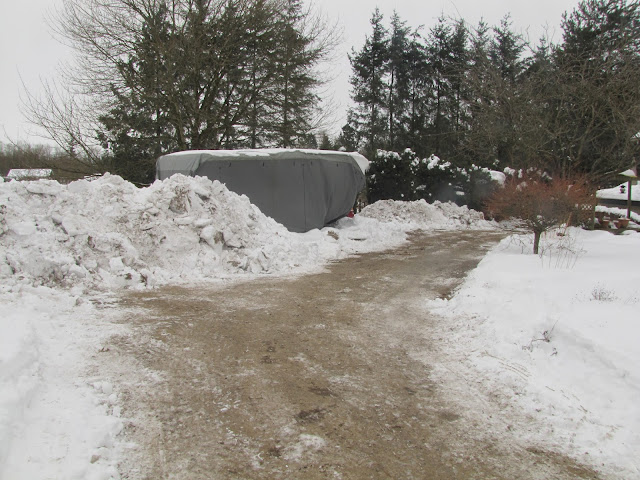 I know I've done a lot of snow posts.  You might think that since we live in Canada, this is par for the course for our winters.
Our climate in this area is generally quite mild. For the Americans, we have similar weather to the coastal areas of Washington state.  The amount of snow we have had this winter, and the amount of snow we had in this last dump is very unusual, and is a very big deal for us.

Here's the rest of our forecast.  I sure hope they are right about Sunday, Monday and Tuesday!