A Needle in a Haystack

More like a set of keys in a hay field.  On Saturday evening we went out to pick blackberries for the Sunday market, about an hour before dark.  Because we were heading out to the back of the property, Larry locked the house and brought a set of keys.  He was wearing soccer shorts because they were light and airy and it was warm, and they had no pocket.  He tied the keys in his shoe laces and double knotted them.  When I saw that I was about to say something negative, like 'that's a dumb idea', but for once I managed not say what I was thinking, and kept my mouth shut. (That doesn't happen often!)  Somewhere along the way the keys fell off.  We looked where Larry had been for the last bit of picking because that's where he thought they must come loose, but we couldn't find them.  We have two sets of car keys, and every once in a while one disappears.  Usually it is found in a pocket in a piece of clothing that hasn't been worn for a while.  So before Saturday we were already down to one set.  Now we were down to no sets.  Fortunately when we had a previous loss of a set, we had got an extra key made, and I carried that single key in my purse for emergencies.  This was an emergency, we needed the car for the market in the morning.  We have so much in the way of fruit and veggies at the moment that we can't fit it all in the truck.  We have had numerous key searches in the past few days, but so far no luck with either set.  Yesterday Larry broke down and got both house and cars key made.  I think we will just stick to one set from now on.  More chance of remembering where it might be if someone doesn't hang them up in their proper place, if there isn't another set to just grab.  That way we have to do a search right away.  And I still have the emergency one in my purse.

Meanwhile, out in the chicken coops.....especially the new coop,... we had a lot of broody hens.  Seven  at one point.  By broody I mean hens that don't want to lay eggs any more, they just want to sit in the nest box and be all huffy and clucky and ideally they want to hatch some eggs.  They don't care if there are no eggs to hatch, they will just sit there anyway and try to scare off other hens that ARE still laying, that want to get in that nest box.  As well, we had hens that wanted to sit in the nest boxes at night, instead of on the roosts.  And they poop in there overnight.

So a few weeks back when Larry was away for a couple of days, I had had enough of the huffy hens.  After the eggs were collected in the afternoon, I fastened up a piece of tarp that covered over the nest boxes.  The broody hens got ejected, and the nest boxes were covered up. 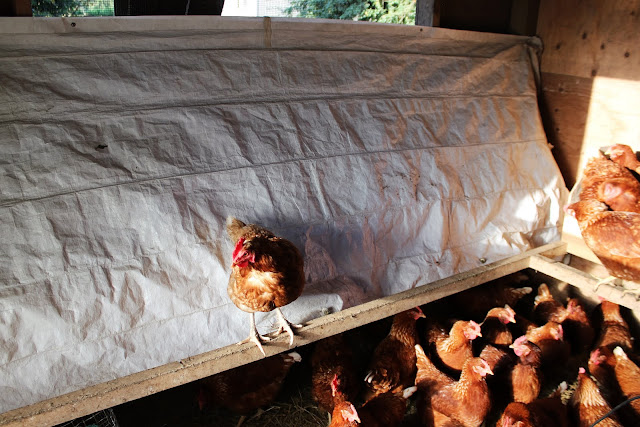 That was enough to discourage four of the broody hens, but three of them got back into the nest boxes as soon as they were uncovered the next morning.  So those three spent a couple of days in a wire bottomed cage.  If they don't have something solid underneath them they won't sit down .  Sounds mean I know, but if you don't do something, some of those hens will stay broody for weeks and weeks...and weeks. One hen was very determined, and it took another day in the cage, but she has got herself straightened out now, and egg numbers have gone up.  Most of the hens are on the roosts at night.  A few roost on the perches in front of the nest boxes, which is okay.  When the coop door is shut at dark, the tarp is tucked up and out of the way, and the clean nest boxes are all set for the next morning.  And we are loving those nest boxes! No bending over, easy to collect the eggs, we should have done this years ago. 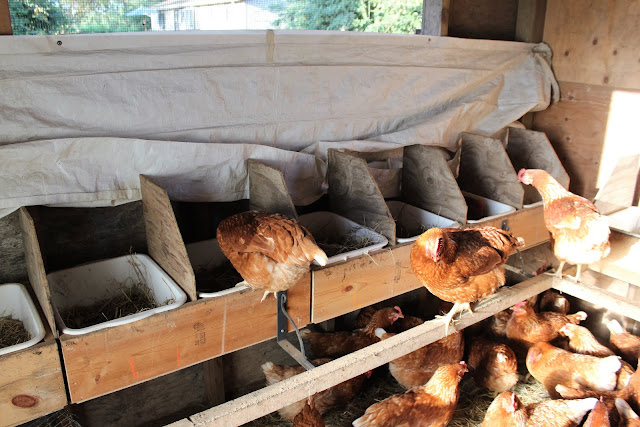 In the morning those hens charge out and its heads down and grass for breakfast. 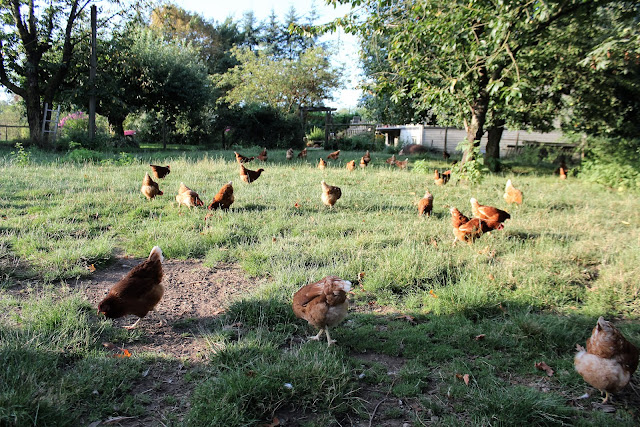 Granny Marigold asked a question about the labels on the jam jars.  I do get a lot of jars back, I give customers a 25 cent discount on their next jar, for each empty they bring me.  Most of them have the labels on.  I think most of the time the jar has been through the dishwasher, and my theory is that the heat just sets the sticky part even more, and the label doesn't want to come off.  I usually get them wet and just rub the paper part off with my thumbs, the sticky part is still there.  Sometimes I feel like I have rubbed my thumbprints right off.  Then I put the new label right over where the old one was.  Lately some seem to rub off, sticky part and all, so I'm wondering if maybe they didn't go through the dishwasher?  The dishwasher thing is just a theory, I haven't tested it.  I have noticed though that on the old style jars that you can't buy any more, the label, sticky and all, will rub off after getting wet.  There must be something different about the glass.  Occasionally I get jars back with the label and the sticky stuff off, I love those ones!

When we replaced our computer, Windows 10 didn't really support the very old Print Artist program I was using.  I was able to sort of use documents I had already created, but the font I was using wasn't available, the labels were all weird with a different font, and I couldn't get them to point where I really liked them.  So we ended up going for something simpler that I could make with the office program that came with the computer.  And wow, was that a learning curve that was!, but I have mostly figured it out now.
I think.