One Thing Leads to Another

A long time ago I read a little story about a woman who was getting ready for bed, and how she needed to take something down stairs.  Well the story goes on about the woman picking this and that up along the way, stopping to put things away etc, seeing other things that needed doing as she went through the house.  She got to bed finally an hour later.  The man of the house got up out of his chair and just went to bed.

I felt a bit like that this morning.  I had got up early and cleaned out the big chicken coop, brought a wheelbarrow load from the compost pile to the garden, and dug up the potatoes for Sunday's market.  This was before breakfast. I was on a real roll this morning.  After breakfast we took the dogs through the bush, and then I went and picked some blackberries while Larry got the tractor and mower and beat down some grass.  I was coming in to put the blackberries on trays to freeze individually, as I am hoping to sell them frozen during the winter.  There was no room to work in the garage where the freezer is, so I was moving some stuff around to open up some space. I uncovered a bin of red plums that had been there more than a week, and had got forgotten after they had been buried under something.  What a gross mess, fruit flies galore, into the compost they went.  There were a few apples in there that were okay so I took them and threw them to the chickens.  Which reminded me that the coop needed some bedding adding to the floor, and I had left the roosts propped up with a 2x4, so I had better go and check that things were okay.  The floor had dried so I went to get some hay from a barrel over by the other coop, and then realized that I needed more than what was there.  Got a wheel barrow, and went to the barn to get a bale of hay.  Saw a bunch of baling string that I needed for a project, and brought a bale over to the coop and spread some around on the floor.  Then the waterer needed filling and there was no water left in the buckets outside, so I carried two over to the hose and filled them up and carried them back and got the waterer filled up.  All good in there.  I had left the dirty bin down the garden after dumping the plums in the compost, by the closest tap so I could clean it out.  I washed the bin out with the hose and thought I had better water the seeds I had planted.  Did that, and was amazed once again by the arugula.  I put those seeds in the ground on Wednesday morning, and here it is Friday and they are coming up already.  So then I took the baling string and cut it into pieces and tied up the new raspberry canes that are flopping over the paths and scratch you as you push your way past.  And then finally I went back to the garage and bagged up the frozen berries that were on trays, and got the ones that I had picked this morning onto the trays and back into the freezer.  And so it goes...... 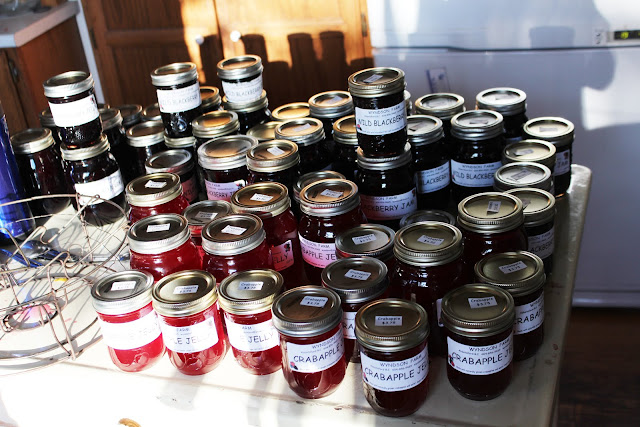 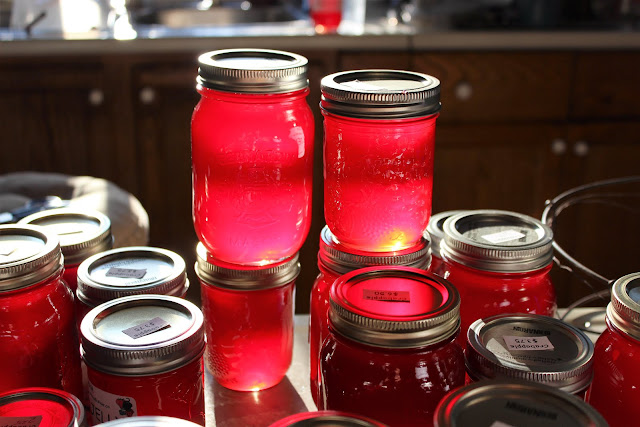 It has been a real fruit week.  Crab apple juice to sieve and bag for the freezer.  Plums to pick and jam and freeze and sort for the market.  We picked the last of the green apples last night.  There were some monsters.  The Bartlett pears need to be picked and peeled and sliced and frozen for Ginger Pear Jam.  I brought home a huge box of seconds of peaches and nectarines from the produce store yesterday, and half of those need to be dealt with.  Jam to make of course.  This afternoon I made Fig Apple Preserves (sounds fancier than calling it jam!) and Greengage Plum Jam.  All our own fruit.  Next is to get those peaches and nectarines sorted out, and then Peach Jam and Peachy Mango Jam, and maybe even some Peach Persimmon Jam.  I have a small bag of persimmons that I have been saving to do something with.  Now seems a good time. Time...there is not enough of it.  Of course I don't use all my time wisely.  The computer calls....I chat with David in England.  I read and look up this and that.  Darn thing anyway, that time sucking computer. 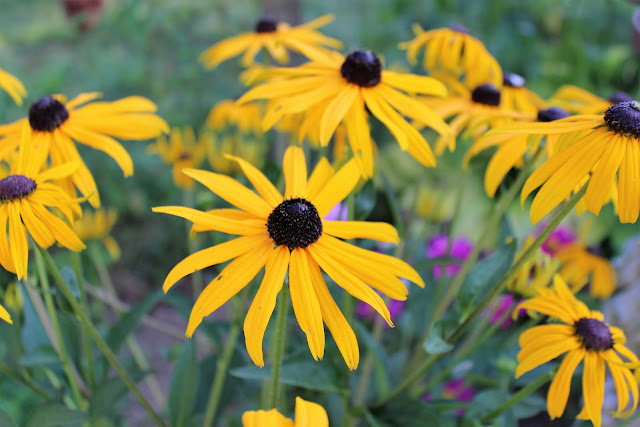 PS. It was hot today, and I decided to make some more jam this evening, when the house had cooled off. So a batch each of Nectarine and the Peach Persimmon were made tonight. I went outside for a quick look  for some of the Perseid Meteors, but only saw one.  The moon hadn`t set yet, so the sky didn`t seem that dark.  An owl hooted off in the distance.  I saw more meteors last night, and listened to three packs of coyotes yipping and howling to each other.
Tomorrow is another day.
Oh darn, it`s tomorrow already!