Monday was a holiday here in BC.  It was our provincial holiday, BC Day!  We forced ourselves to do a bit of something different, so first we took the dogs down to the dyke for a swim, and then after that we went for a bike ride.  Of course, like usual around here, nothing is ever as simple as it sounds.  Since we had to drive to where we wanted to ride, we needed to take the truck.  Since there was a bunch of market stuff in the back of the truck, we decided it would be easier to use the bike rack that fits in the hitch receiver on the back of the truck.  That would save us unloading and then reloading the truck.  Of course first we had to find the bike rack, and since it hadn't been used in ages, we weren't sure where it was.  I looked, with no luck, but thankfully Larry saw it fairly quickly.  Then we had to change the part that went into the hitch reciever, because it had last been used on David's car, which took a different size.  So we got a bigger one bolted on the rack, and then found it was too long to fit in the truck reciever, blah blah blah,.  So in the end we could probably have unloaded and reloaded the truck five times, in the amount of time we spent getting the bike rack sorted out.  That's just how we seem to roll.

It was about 7:30 by this time, and it had been a nice summer day.  By the time we got one our bikes, about 25 minutes away just south of Hougen Park, by the Cole Rd rest stop on Hwy 1, it was cooling off, with a cool breeze.  We set off down the dyke, heading southeast towards the little village of Arnold.  This is a flat area with a lot of dairy farms.  There were acres and acres of silage corn, and some of it was monstrous.
"The Corn is as High as an Elephant's Eye' 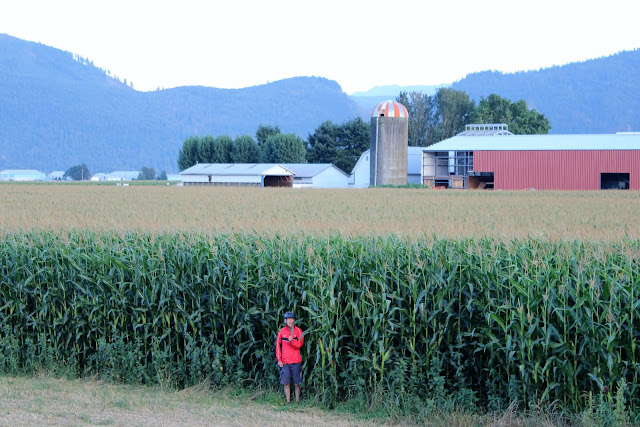 The dyke went quite close to a few farms, one in particular made you feel like you were riding through their back yard.
There were different sizes of bridges crossing the drainage canals.  This one hadn't been used in a long while.  Those darn blackberries, as we know well, would cover the whole area given half a chance. 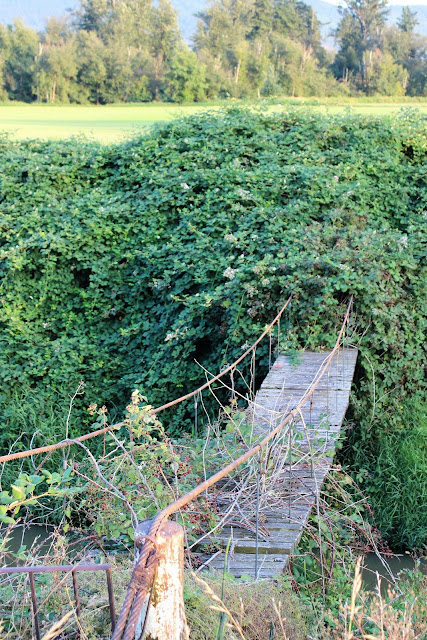 We passed a few dog walkers, and saw two other cyclists.  The going was pretty rough, I think they had put more gravel down since we were last there a few years ago.  The sun was shining just about straight down the dyke. 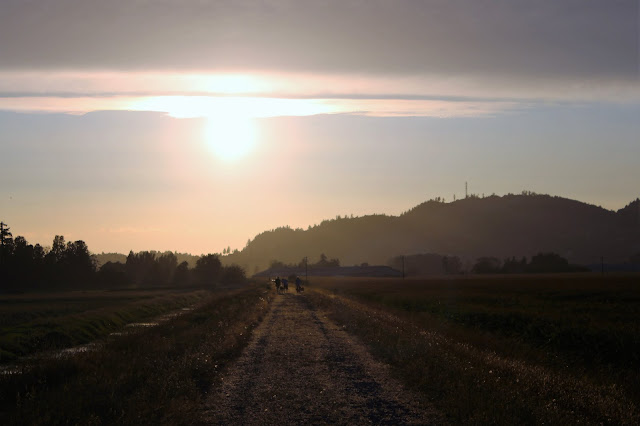 The end of the dyke, with Vedder Mountain in the distance. 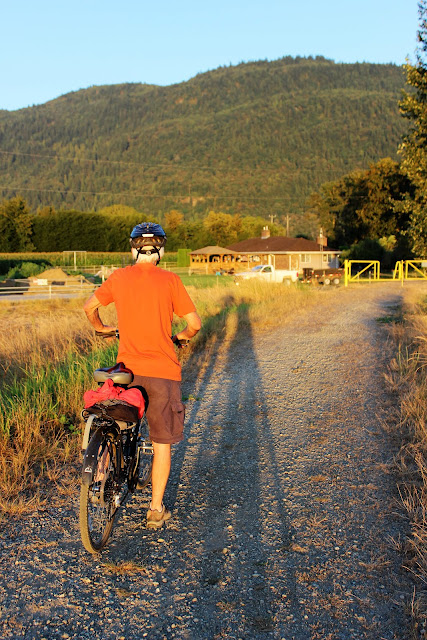 This was as close as we got to Arnold, as we needed to head back to the truck before we ran out of daylight. 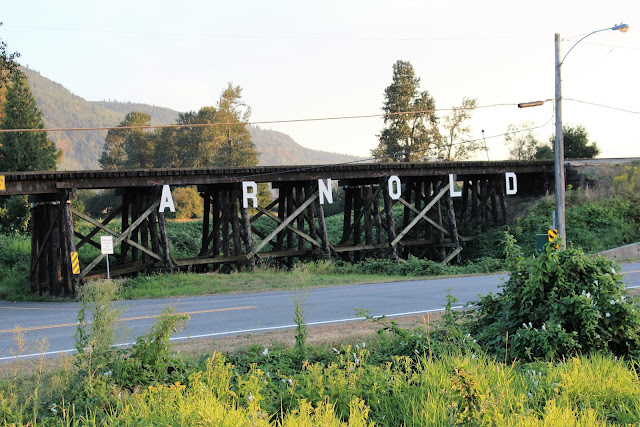 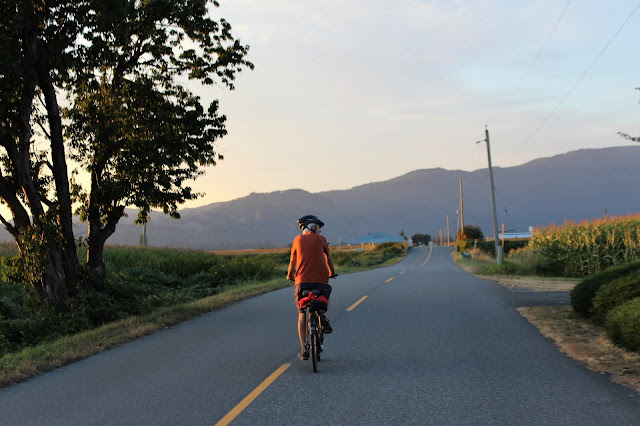 We chose to ride back by the roads, it was a lot smoother that way, and most of them had very little traffic.

It was a nice evening with some interesting cloud formations 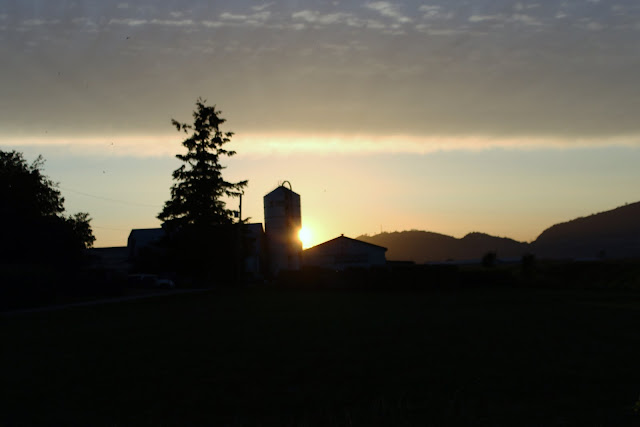 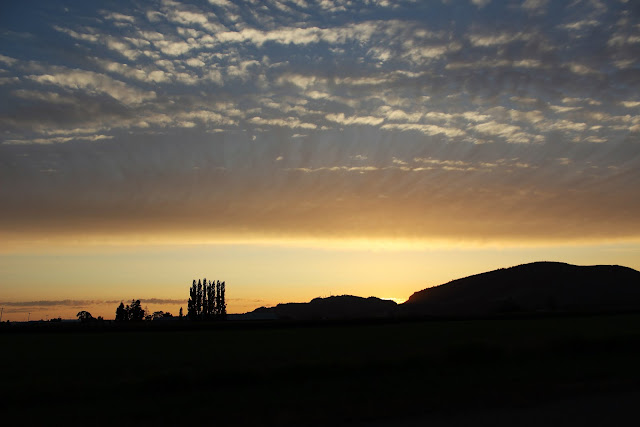 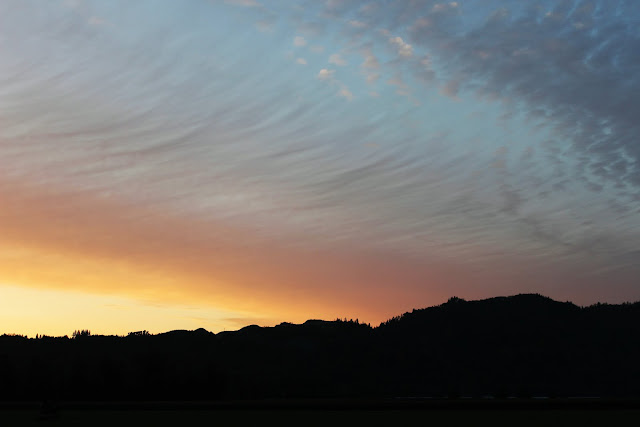 And if it had been earlier and a hot day, we could have gone for a quick cool down 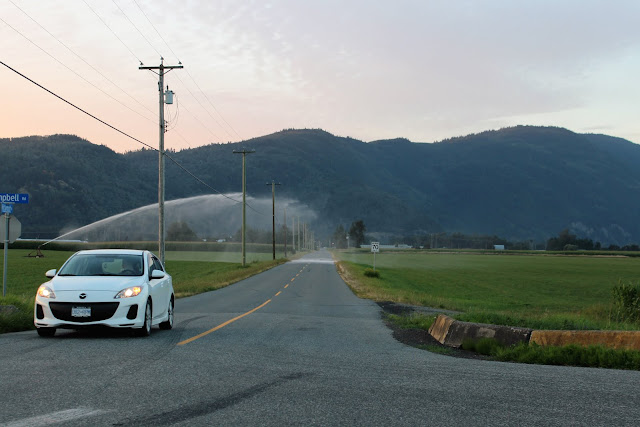