Yesterday we worked on the lean-to part of the new chicken coop.  The coop is on the site of the old sheep barn, and that is where Ramona, our one and only remaining sheep, used to hang out, as did the chickens when it rained.  So when we tore down the sheep barn, we left the half wall up on the north end, and the plan was to extend the roof out over that wall.  That would make a nice shelter for Ramona, and a spot for the chickens to hang around outside, but be out of the weather. We do get a lot of rain here in the winter.

Larry has been picking away at it, working on it occasionally, getting the rafters up and connected into the coop, and the plywood on.  Now that rain is in our forecast, it was time to get the tar paper on and the metal as well.  We were able to scrounge up enough metal to cover the whole thing.  Larry had taken down the old rotten woodshed and salvaged the roofing that had been laid on the top of that.  It isn't pretty, but it's functional.  We were lucky enough to be gifted much of the lumber for the coop, and the 2x4's were longer than we needed.  Larry asked me how much of an overhang I wanted at the end, and I said well why cut it shorter, just leave the overhang as long as possible.  So he did.  It is just hanging out there, and certainly wouldn't meet any building code, but sure supplies a nice bit of extra covered real estate for the hens.  We may end up putting some supports under the end, I suppose that would be a good thing in case of a heavy snow fall! 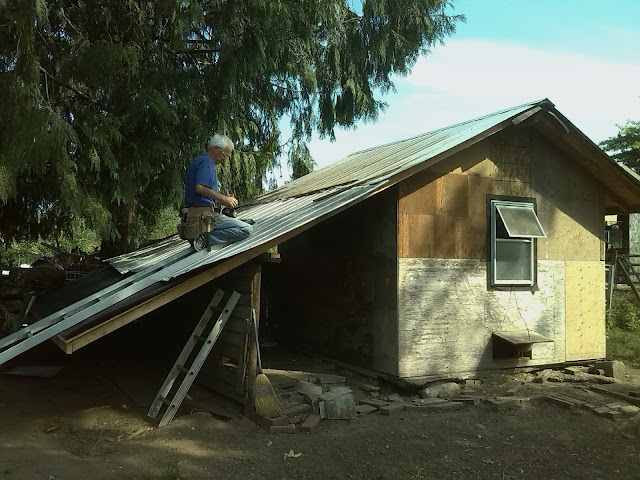 I helped Larry manhandle the sheets of metal onto the roof and into place.  Because we were doing things ass backwards (usually a roof is done from the bottom up, not the top down) he needed help getting the sheets lined up and pushed up underneath what was already there.  After all the pieces had enough screws in them to hold them in place, I was able to leave him to it to finish it off.  As I hear the rain pouring down this evening, which we desperately needed, it is a good feeling to know that part of it is done.

A sort of funny story that I meant to add to last night's post, but forgot at the time.  While we were away last week, Meredith was coming here in the evening to collect the eggs and water those seeds I had planted as well as a few other things.  She would shut the chickens in and then head back to her own place.  A nieghbour came over in the morning to let them out.  One night she came really late, just before midnight, because she had been to a show in Vancouver.  She was dressed up nicely, and had forgotten to bring a change of clothes.  It was really hot last week, but she put a jacket and some rain pants on over her good stuff and went out to collect the eggs and shut the coop doors.  All was fine until she got to this coop.  The door was down and the hook that holds it open was missing.  All 60 or so of the hens were huddled outside in the dark. She propped the door up with a piece of wood.  So there she was, picking each hen up and shoving it through the door.  The extra clothes have her sweating bullets.  She manages to find most of the hens and gets them in.  She closes the door and puts a brick in front of it.  We are not sure what the neighbour did in the morning, but when Meredith came again the next night, the door was shut again.  The maddening thing was that she had meant to go over and check that the door was open, as soon as she arrived, while it was still light.  Instead she got busy with the watering and forgot, and by the time she got over there it was dark and the hens were all huddled outside again.  So once again she had to pick each one up and put it through the door. (There is no power to the coop yet, therefore she couldn't turn a light on to help guide them. That job is on the list).  Then she phoned us in Oliver and asked where she might find another hook.  She managed to find something that worked.  Gotta love her!  Thanks Meredith xxx

PS We never did find the original hook.  All I can think of is that Ramona was using the door as a scratching post, and the hook got yanked out...maybe?