My favourite thrift store prices it's items with a different coloured tag each week.  There are four colours, red, blue, yellow and green.  For example, if items placed out this week were blue, the blue items would stay at full price for two weeks, then the third week they would be half price, and the fourth week they would be 50 cents.  So it's kind of fun to go in on a Monday morning and get first pick of the fifty cent items. Every week a different colour tag is 50 cents, it is the colour that was half price the week before.  This rotation keeps going all year.  I think if things don't sell at 50 cents, they go back to full price the next week.  Often the 50 cent clothes are all put on one rack, which is really handy.  I wonder if they do something with the 50 cent clothes that don't sell.  They might have to, or they would run out of room.

A few months ago, one Monday morning I was in there, and found this particle board book case for 50 cents.  Ugly, but I had a plan in mind.  It was the perfect size for an awkward spot in Meredith's entry to her condo. I could fix it up for her birthday at the end of November.  Nope, didn't happen, so then thought I would do it as a Christmas present.  That procrastination sickness really hit me hard just before Christmas, and I didn't even start on the bookcase until Christmas Eve afternoon.  I should have sanded the darn thing, but I just didn't want to do it.  So I thought that primer would work over the fake wood, but it didn't have a lot of sticking power.  That really kind of put me off.  Should I sand it all off and start over? Should, but didn't want to, so kept going.   I had some cute legs that I'd picked up for really cheap at either a thrift store or garage sale, so I screwed those on the base.  I scrounged around and managed to find a bit of trim to put around the bottom to change up the look.  And then I got kind of fed up with it, and ran out of time, and it didn't get finished for Christmas.  I showed it to Meredith and told her I'd finish it eventually.  So I slapped a few more coats of paint on and sanded and waxed it, and dropped it off at her place today while she was at work. 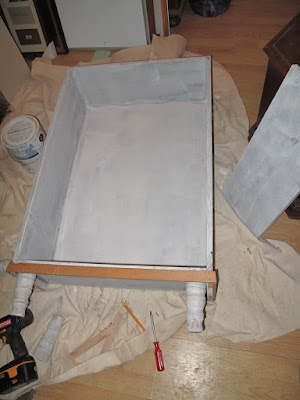 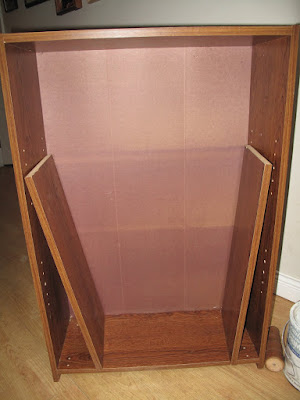 It fits perfectly under one of the 'windows' in the wall between the kitchen and the hall, and is shallow enough to not steal a lot of hall space.  I grabbed a few things off other shelves and quickly 'staged' it for the photo op.
Putting little legs on furniture makes all the difference don't you think? 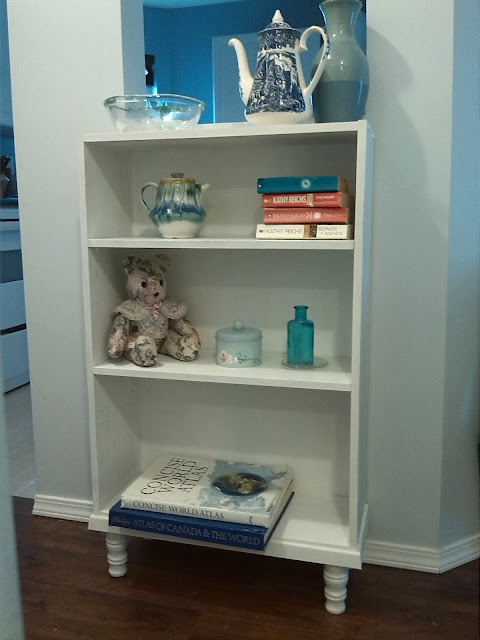