Starting the New Year with a Bang!

New Years Eve was pretty well a non event here.  We even went to bed before midnight.  The alarm was set for seven the next morning, and I needed some decent sleep.  Of course the disadvantage of using your phone for an alarm is that if someone sends you a Happy New Years text just after midnight, the phone wakes you up.  And then a moment later you are reminded that Larry's phone has been set up to beep every two minutes, for 20 minutes.  I heard at least 6 of those beeps....Larry didn't hear one.

On Wednesday morning one of 'those' links had popped up on Facebook. You know, the ones that are somehow related to something that you have looked at earlier.  Anyway, it was a link from a local running shoe store for a series of runs. The first one was at 10 am  Jan 1 at Crescent Park in South Surrey.  Appropriately called the Resolution Run.  You had the option of doing 4 or 8 kilometres.  Since both Meredith and I plan on doing the 10 km SunRun again this year, I thought it might be fun to do.  I sent the link to Meredith.  She said my idea of fun was different to her's, but she'd look at the link after work.  So when I asked her that evening what she thought, she said she was game. Okay then!  That was Part A accomplished.  Now to mention Part B.  I just casually mentioned that after the run, we could head over to White Rock, just a few miles away, and join in with the Polar Bear Swim at noon.  Doing a Polar Bear swim has been on my bucket list.  It's not on Meredith's.  But once again I was shocked when she said she was game.  She said she'd stop by the dollar store after work on NYE and see about getting a few things. Costumes were recommended!

So Friday morning just before 7, I changed the alarm to go at 7:30.  I was awake, but I didn't want to get up at 7. I hate getting up when it is still dark, and the early riser I used to be seems to have taken a leave of absence.  Meredith came over about 8:45 and I grabbed the last few things I needed.  Running, then 'swimming' then going to visit my mother afterwards required far too many clothes.

Here we are at Crescent Park at 10, getting instructions on the course.  The sun is halfway up the other side of the trees, it is below freezing, the ground is hard and there is heavy frost on the field. 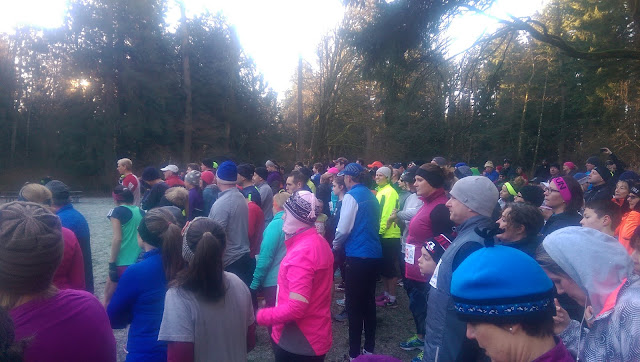 We had chosen the 4km (2.5 mi) option, since I hadn't done any run training since the middle of 2013, and Meredith since April of 2015.  We started at the very back of the pack, we didn't want to get in the way of the serious looking runners in there.  We were running on trails, some which were quite wide, and other smaller ones that could only handle single file.  There were a few bottlenecks when the trail went from wide to skinny, but it was all in good fun so no one cared if they had to stop, or run in place or wait.  We had decided at the start we would run until we needed a break, and then we would walk for a while.  In fact we started passing walkers, and I was just so proud of us that we were able to run the whole way, and even had a bit left at the end for a sprint to the finish line. I'm sure the Total BS class that Meredith has been doing, and the 6 or 8 Zumba classes I've been to, as well as the 45 lbs or so between us that have been lost, had a lot to do with it.
Here we are at the end.  Headbands and gloves off, and jackets open, and all warm and sweaty. 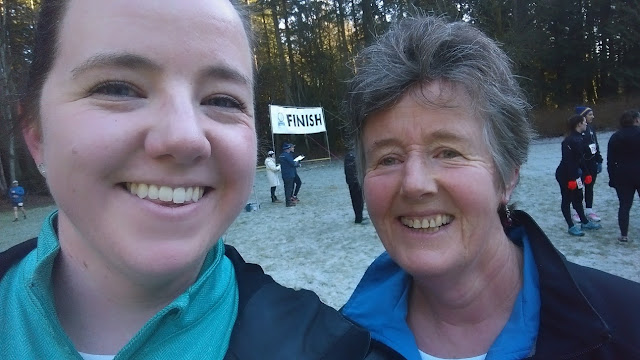 We availed ourselves of the free refreshments, but figured we'd better get heading to Part B. 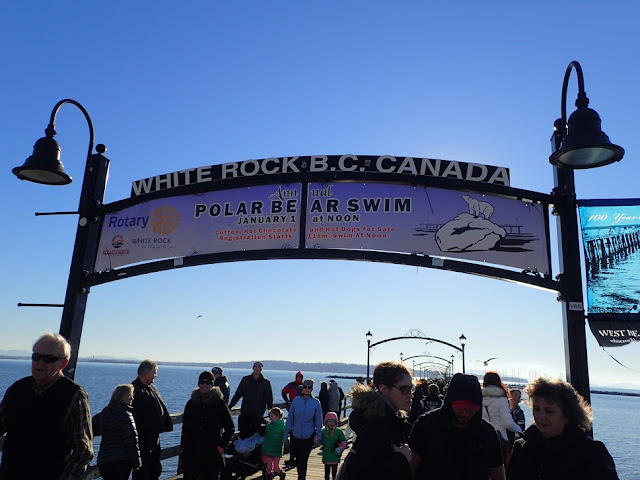 Loads of people were walking towards the pier.  We had to park way off in the distance.  That's the old train station by the fence behind the tracks.  It's now a museum, and way back, my dad used to teach pottery classes there. 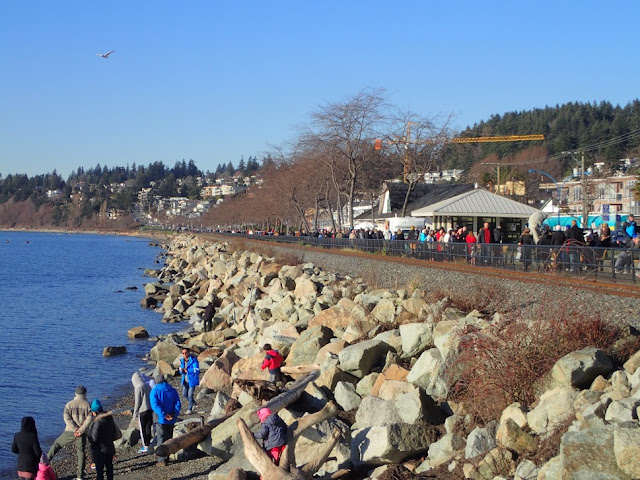 Costumes on , and ready to go 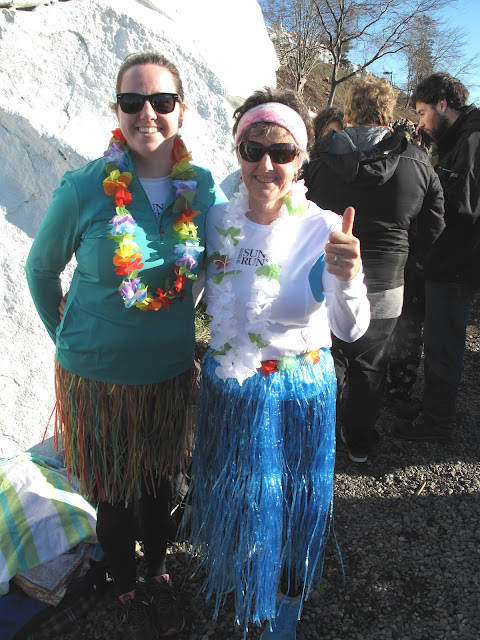 At noon there was a countdown and everyone charged into the water.  David and Larry had shown up to watch.  David was trying to video us but there were so many people in the way it's pointless to show the video here. That's a train going by in the background, and lots of people were stood on Marine Drive at the top of the picture.  Meredith took her waterproof camera in with us, and there is a tiny bit of video of me getting wet, but after she sent it to me I can't figure out how to do anything with it.  Anyway, we ran in together until it was too deep to run any more and then just flopped in and got every thing wet but our heads. The air temperature was around the freezing mark, or just above, and the water temperature was a few degrees above that.  It cold, very cold, but not the heart stopping, lung crushing, instant extremity freezing cold that I thought it might be.
This is after we got out. 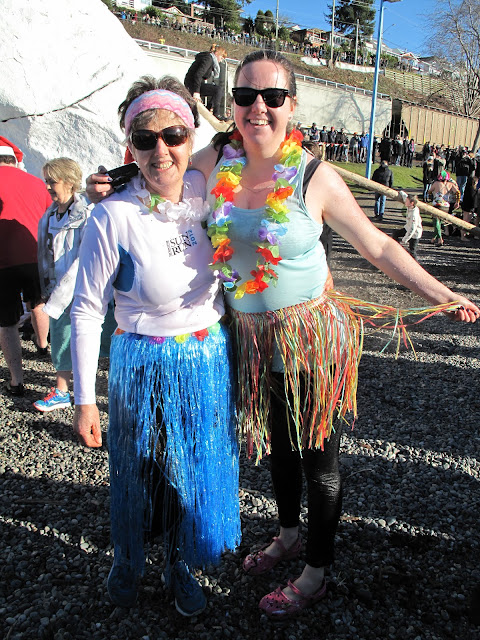 And then I found out that there was no decent video of us in the water, so we waded back in for a shot.  By this point Meredith's feet and my legs were feeling pretty numb. 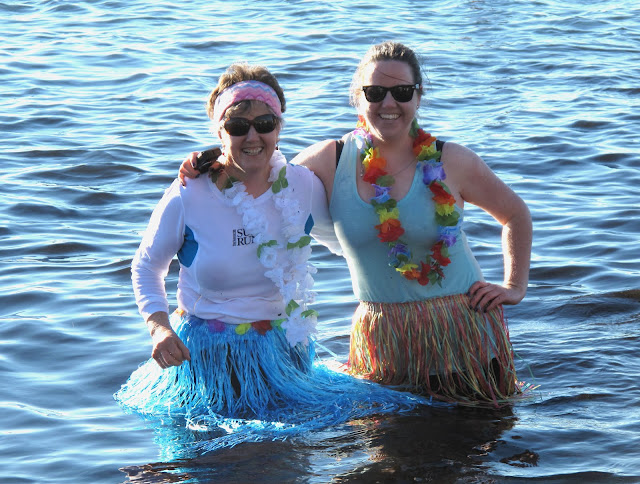 The white rock of White Rock.  Our stuff was just in front of it, and it made a nice wind block/heat reflecting wall to stand in front of. 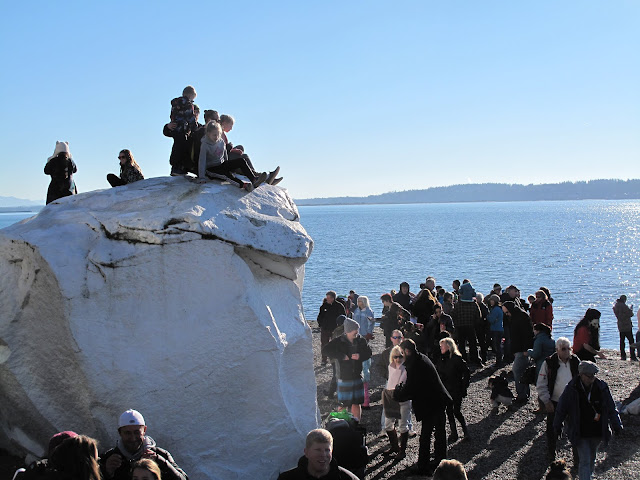 After it was all over, heading back to the car.  There was still quite a crowd hanging out.  At least we just had to walk on the flat.  Larry and David had parked way up the hill, so they got a workout. 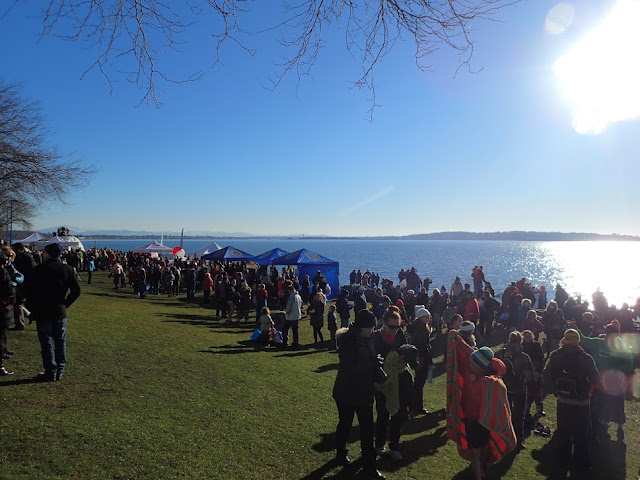 We stopped in some washrooms on the way back to the car and got the wet clothes off.  With all those people thrashing around in the water, the silt and debris got stirred up.  The water was quite black and kind of gross.  Even though my leggings were skin tight, that black silt still got up underneath them. Yuk.
Would I do it again?
Maybe.....but if I did I think I'd move a bit further down the beach from the main crowd.  Although not being in that mad pack of splashing screaming people, you wouldn't be carried along by the momentum of it all, and that would probably make it harder to throw yourself in.
Note to self: If you go in with clothes on, it's kind of like a wet t-shirt contest.  Black is a good colour.

Just found this photo from the Peach Arch News (White Rock newspaper) online.  Meredith and I are right behind the two bare chested guys on the right.