Because we have had quite a bit of freezing weather, the ground is frozen, and the trail through our back bush has a lot of frost heave in spots.  The ground collapses under your feet which makes it next to impossible for Calli to traverse.  If she was a younger dog she could probably muscle her way through it, but at pushing 16, it stops her in her tracks.  Instead we've been walking around the block in the morning, and then not taking Calli in the afternoon, and doing the bush run then.  Jake seems to be bored with our walks, he's plodding along like an old man.

After a miserable day on Tuesday, cold rain, frozen ground and socked in conditions, it was a pleasure to see the sun shining yesterday morning.  We decided to change it up a bit and go down to the dyke.  This time I made sure I took the camera.  One of the previous times there were a couple of eagles doing aerobatics, but all I could capture with my phone, was this. 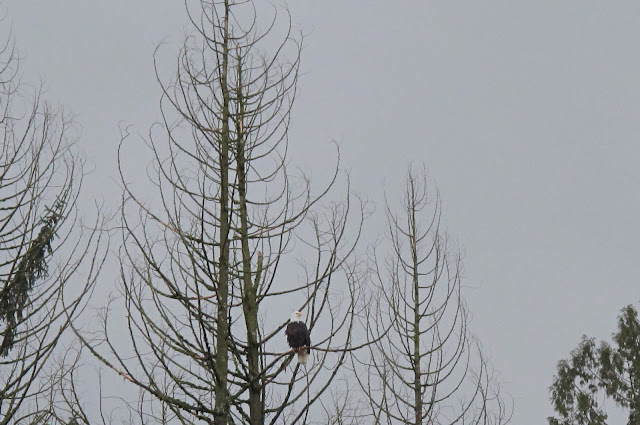 And probably the reason the eagles were hanging around was this.  Nathan Creek is a salmon spawning stream, and in the late Fall and early Winter we have to deal with dead salmon. 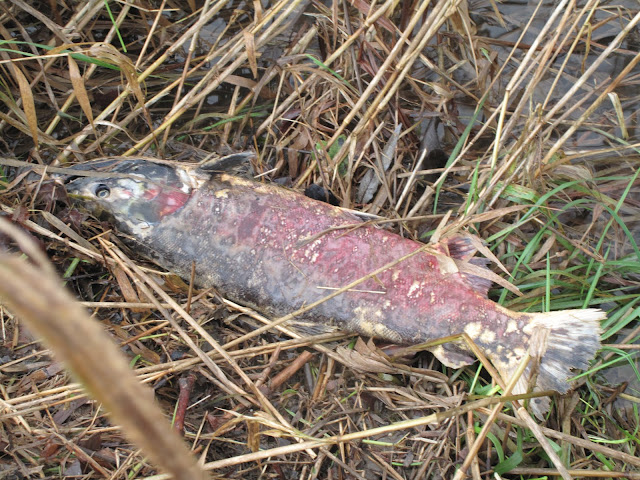 Well actually we don't have to deal with it if we remember to keep our eyes on the dogs.  I said as much as we started off on the walk.  'Keep an eye on Luna.' Of course a leash would take care of that, but this walk is all about fun for the dogs.  And immediately after I voiced that thought, it was forgotten.  Somewhere along the way Luna had disappeared.  I called and she appeared up the bank, licking her lips, and with something gross and white smeared half way up her right shoulder.  No doubt had found the remains of a dead frozen salmon, and rolled in it.  On a positive note, it didn't really seem to stink...much.  I got her to roll in the grass, but that wasn't helping.  The only other option was to get her in the creek.  The dogs 'think' they want to fetch sticks out of the creek, but in reality the water is too cold this time of the year.  It would have been colder than the ocean water I went in on New Years Day.  And sticks were hard to come by.  I wanted to get Luna in just enough to wash the goop off her side.  I faked her out with rocks, water logged twigs, and managed to her deep enough into the water to wash off the goop.  And when she couldn't find the pathetic piece of vegetation I had tossed in, she decided that a little stream clearing was the solution.

Jake wasn't really into getting too wet, but he did want a stick.  He went off to find his own. 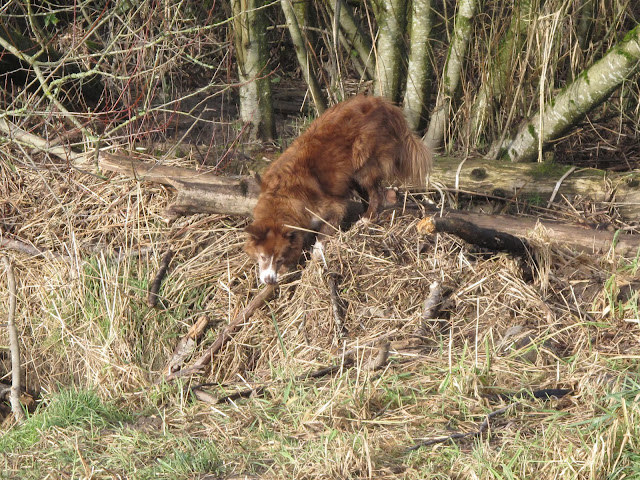 We park on a road that intersects the dyke.  Nestled between the road and the dyke is an old house buried in the trees.  Actually those green trees are a massive grove of bamboo.  You can just see a bit of the roof above that ladder.  The house must be so dark inside.  An old fellow lives there, he has seemed old forever, and for a while we thought he was gone.  But the garden, and he had a wonderfully tidy and neat vegetable garden, continued to be planted.  Maybe not as tidy as it used to be, but still better than mine.  We don't walk down there as often now, so less chance of seeing anyone, and maybe now he isn't there anymore, but the garden was planted in 2015.  I'll be watching this spring. 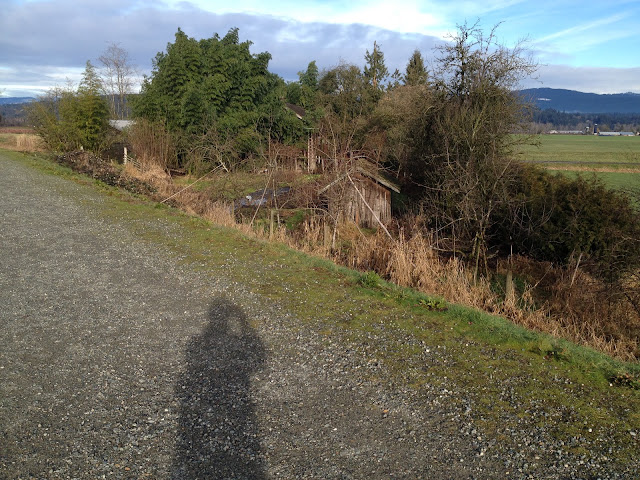 Probably before the dyke was put in, there was a bridge crossing the creek from the house to the land on the other side, which now has just gone wild. 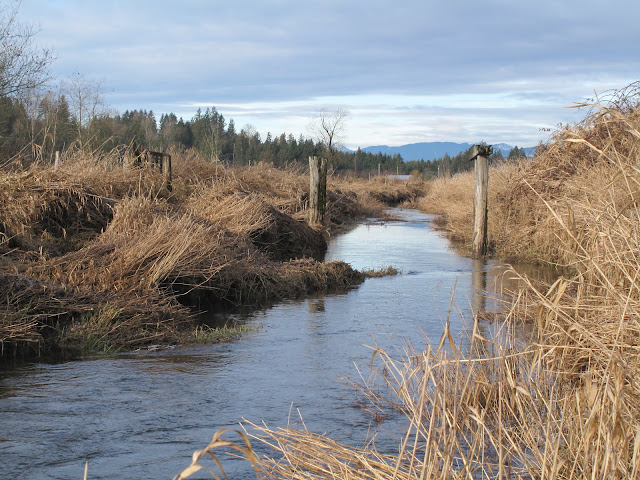 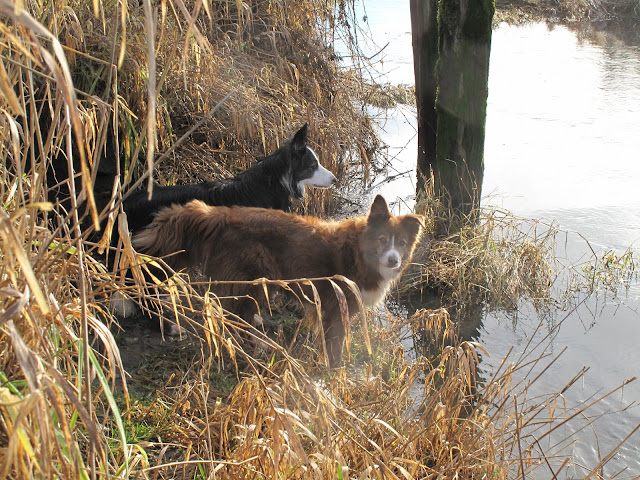 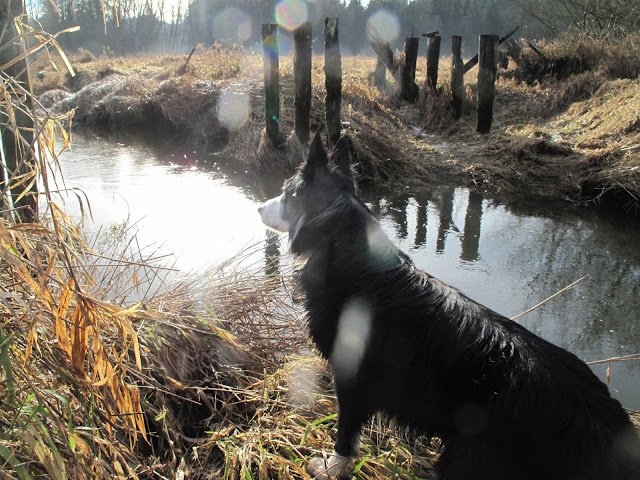 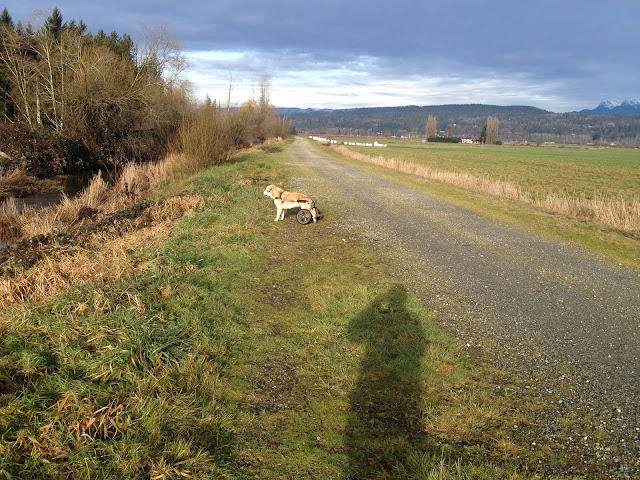 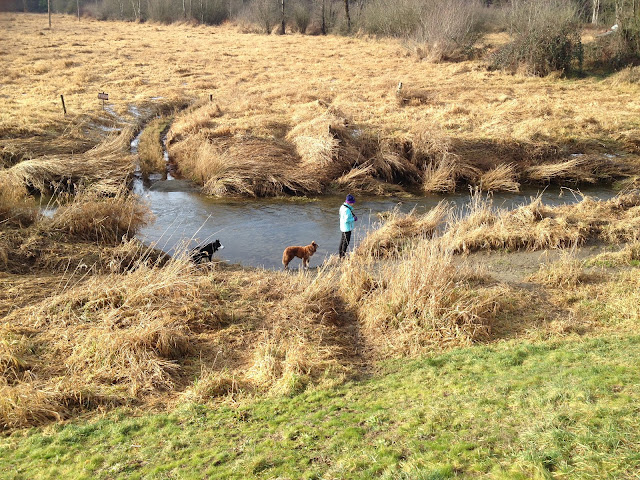 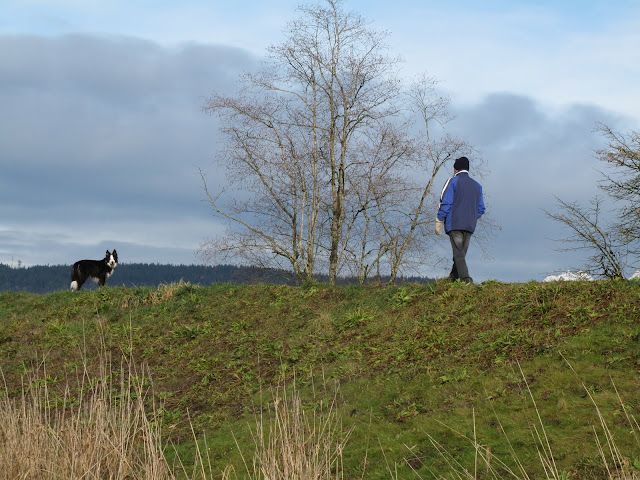 Not an eagle to be seen this trip, but a hawk passed over the dogs and Larry as they were heading back to the car.  As we were driving off, I spotted this great blue heron standing in the field.  It flew farther away from the road as we stopped, but still close enough for a decent shot. 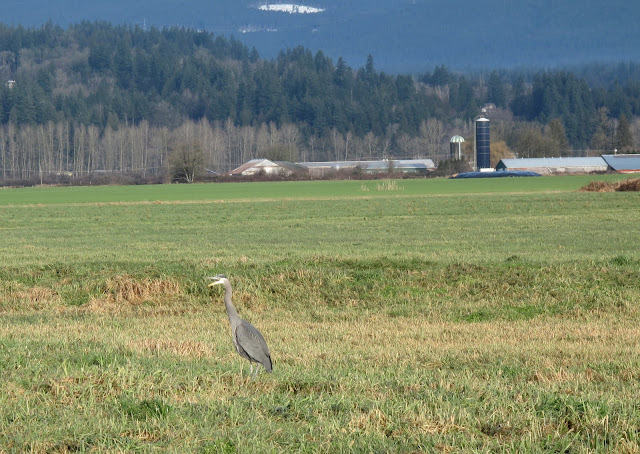