Meredith and I are doing it all wrong.  We are entering runs before we've done any running training.  It was me that suggested we do a series of trail runs this winter, two of which happened before we had done hardly any training runs.  ( I started with a training clinic last Wednesday, and did a 'homework' run on Friday.)

So last Sunday, on that dreary wet morning, we met at Campbell Valley Park and ran a 5K.  As in the previous race on New Years Day, we started near the back of the pack, because we knew we weren't going to be fast.  The rain was not heavy, sort of medium I guess.  It wasn't long before the group got held  up going down a steep, and quickly getting slippery, narrow trail.   And then before long we got off the wide gravel trail that was at the bottom of the hill, and onto one that was rougher and narrow, and yes, muddier.  So it was a bit slow going through there, but eventually we got out of the trees and onto a wider trail, and oh, there were a few wooden boardwalks too. Parts of it were quite nice, if you like mossy, damp West Coast rainforest scenery.  I tried to video the trail as we were running. Apparently when I thought the phone was videoing, it wasn't, and when I thought I turned it off, I actually turned it on.  So I had 23 minutes of the inside of my pocket, (black) complete with sound effects. At the end of the valley we had to climb up to the top of the hill again, that was a steep one, and there were even some steps at the very top. The second half of the race was better because people were more spread out, and it was relatively flat.  By this point I had found my stride and felt really good.  The 1 km and 2 km points are marked, and then they sneakily don't mark the 3 km.  You are starting to think, that surely another kilometre must have passed, where is that darn sign? and then all of a sudden you are at the 4 km mark.  Only one to go.  I felt really good, I wanted to pick up the pace a bit, but my running partner was a bit reluctant.  I slowly started to move ahead and she followed, we were able to pass a few people and we finished really strong, and I felt great. 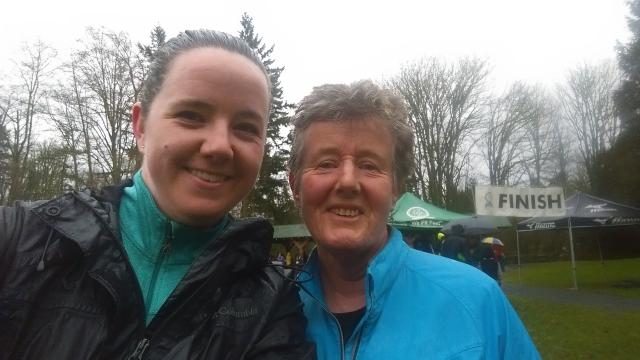 You know that runner's high they talk about, well I was really feeling it on Sunday, and it even carried on to Monday, I felt that good.  I think part of it too was that on Saturday, I was having trouble with my back, with muscle contractions on the left side.  It started to get really bad about lunchtime.  I did put a heating pad on it and that helped.  In the afternoon we had to do a fair bit of driving, and I was all cramped up again when I got out of the car each time. I was feeling really disappointed because I knew in that condition, I wouldn't be able to run. Some of the time I could hardly walk.  That night before I went to bed I took some Ibuprofen and hoped for the best.  I told Meredith I was coming to cheer her on if I couldn't run myself.  I was quite pleased when I got up Sunday morning and my back felt good.  It did deteriorate a bit once I was up and moving around, but it didn't get any worse than that.  I was going to start the run, and if I had to pull out part way, well so be it.  In fact my back felt better after the run than it did before the race started.
We certainly weren't any world beaters time wise, but we ran the whole way, non-stop, and felt like we could do more at the end. Or at least I did.  The next run in the series is an 8K in Aldergrove Lake Park, that's on Feb 7.  The running clinic we will both be going to on this Wednesday is working towards us running the 10K Sun Run in the middle of April.  My 'bucket list' goal is to finish that in under an hour.  I have some work to do.

Luna was my training buddy on Friday.  I have the leash fastened to a belt around my waist.  She is pretty good, she only tried to trip me up once!