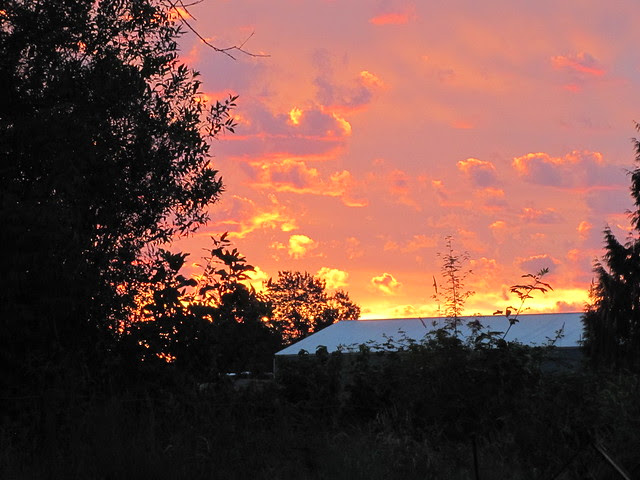 Sunday morning I had the alarm set for 5 am.  Earlier than I'd like to have to get up, but we were going to the farmer's market and I had run out of time and energy to get everything done the night before.  So 5 am it was.  Still had the salad greens to pick and mix and bag, arugula, chard and herbs to pick as well.  And the flower bouquets were not done.  Finished fiddling around with things about 10:30 Saturday night, and then had a bit of computer time (and we know how that goes), so it was about 11:30 when I went to bed.  Figured 5 1/2 hours of sleep wasn't bad.  (Some market weekends I might only get 4 hours).  Of course I am optimistically thinking of five and a half hours straight.  Yeah right.  I usually don't have trouble getting to sleep, as was the case Saturday night.  But then a couple of hours later I woke up and desperately had to pee.  Probably a result of all the watermelon I had eaten that day.  A lot of certain fruit seems to do that to me.  And then somewhere around the 3:30 am mark, Luna starts retching in the bedroom.  Could tell I didn't have time to leap out and make the mad rush to the back door, so just let her go at it.  Didn't sound too bad and too much.  After she was done that, she then started to make little squeaky noises, which meant she needed to go out.  Couldn't ignore that, so tiptoed around the bed, trying to not to step in any slimy pukey spots on the floor in the darkness. I also had the feeling that Jake had come in and was laid on Larry's rug, so tried to not step on him either.  Couldn't see him, but sensed that he was there.  In the darkness he just blends into the rug.  Had to pee again, and then leaned on the breakfast bar with my eyes closed while I waited for Luna to do whatever she had to do out there.  Staggered back to bed.  Then of course it seemed like two seconds later that the alarm went off. Hit the 6 minute snooze button a couple of times, but somewhere in there a coyote started a morning serenade, and Luna was barking back at him from the back door.  So I got up.  I could see that the morning sky was very pretty and grabbed the camera and with bare feet and nightie hobbled across the driveway. 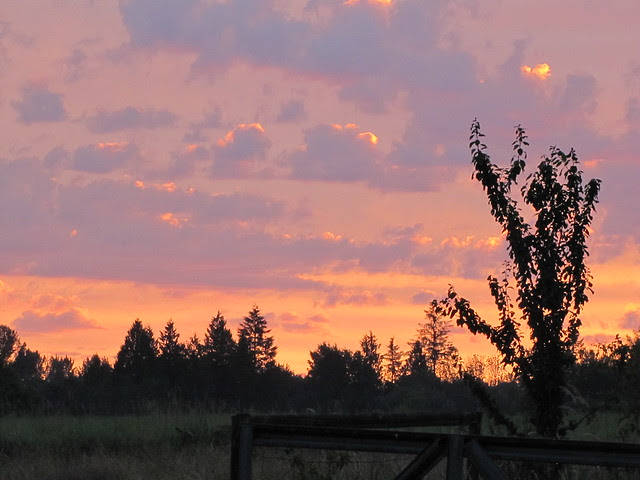 I was going record the coyote too, but of course he had stopped by the time I got out there.

Never mind the camera or the coyote, where's my breakfast? 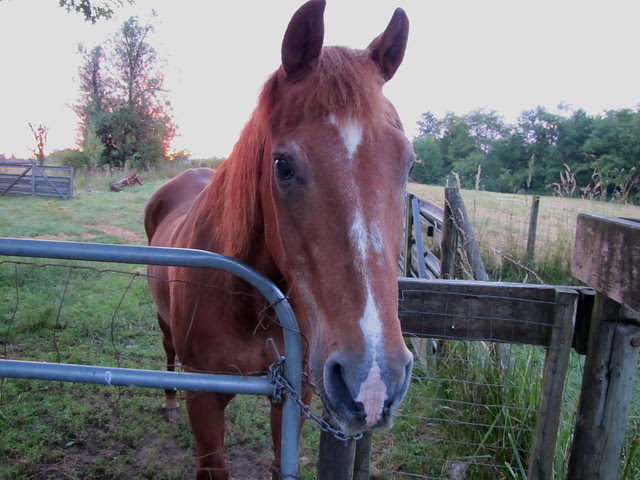 So I got the rest of the stuff picked, and it was loaded in the truck, and Larry headed off just before 7:30.  I stayed and did the flowers and headed off at 8:13.  Which meant I wasn't going to get to the market until 8:50.  It opens at 9.  Hopefully Larry would be mostly set up by the time I got there.  Right now it is taking us a bit longer to get there than usual because we have to take a detour due to a new overpass being constructed on our route.  Then yesterday morning they had thrown another detour in, as they paved a stretch of that same road.  Unfortunately the detours were miles apart, and both of us missed the poor signage on the first one.  If we had seen the signs, we could have turned at the appropriate place, which wouldn't have added any more miles.  We both missed it, Larry continued on farther south to Zero Avenue, which runs along the Canada/US border.  That added on another couple of miles as well as a ton of traffic calming, wide low speed bumps.  Would have been fine with me in the car, but with Larry and the truck and trailer, it was very slow going.  I did a u-turn and went back to the posted detour, and another couple of extra miles.

When I got there, Larry was no where near set up, so we were madly rushing around to get that finished.  My idea was to take a picture of all the produce we had for sale, and the mini line-up we have outside our booth before opening time.   No time for that, just as soon as the produce was out and ready, we released the crowd with an 'Okay'. That's just the same way I release the dogs from a stay:).  Our devoted customers got all their greens, and then we had a bit of a break and were able to get the rest of the set-up done after they were gone, and it was just one or two customers wandering in at a time. 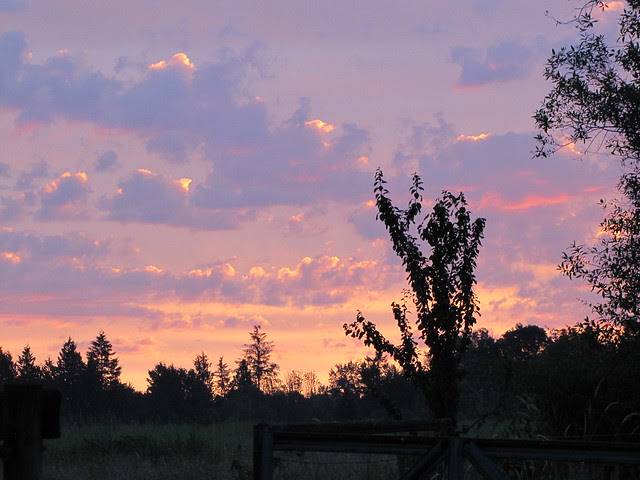 We sold everything except two bunches of collards, one of which we ate last night in a stir fry with onions and sausages.  All in all, a pretty good day.
Posted by Karen at 11:10 AM