Quite often when you buy a house, there are other things included in the purchase besides the house and the property.  Frequently the appliances are included, as they were in our case at Wyndson Cottage, and we also got the window coverings.  Not that the window coverings were something I really was drooling over, but you have to have something to give you some privacy, just in case you want to wander round stark naked in the evening.  These windows were covered.  I think every window had at least two forms of covering, several had four, and  one window in the bedroom had five.  We are lucky enough to have two windows in the bedroom, on different walls.  I'm thinking summer, and cross-drafts.  But yeah, five coverings.  First there was a drapery made of a heavy tapestry type fabric.  Underneath that was chocolate brown broadcloth drape.  Then there was vinyl venetian blind.  On the outside of the house there was some special sort of screen, which I've never seen before, that I guess was to prevent the sun shining in.  It was a lot of very thin horizontal bars between vertical strips.  It stopped anyone from being able to see in during the day, but wasn't effective after dark. 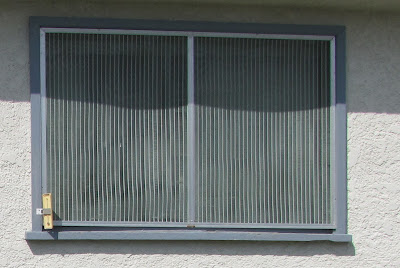 And over the top of that was one of those outdoor roll down blinds made of plastic slats.  I would have hated to be trying to get out of that window in case of a fire.

The first morning we rolled up the outside blind.  The inside drapery remained open.  The venetian blinds were used at night, just in case someone in the house next door was able to see in.  As soon as the light was turned out, that blind was pulled back up.  I like to see the sky when I wake up.  Covered windows make me feel claustrophobic. Let the sun shine in!
Posted by Karen at 11:53 PM