Thanksgiving Day in Canada is always the second Monday of October.  A lot of people like to have their big dinner on Sunday, but we used to always have it on Monday.  Mostly because we were at a farmers market on Sunday, and was I not up to cooking a big meal that day.  It would have been the same this year, but we discussed it and came up with a solution.
Meredith said she was willing to make an attempt at cooking the dinner on Sunday, while we were at the market.
That way I was able to pick up my mother, who is in a care home about 5 minutes away from the market, and bring her back to our place for dinner.  It was nice to get home after the market and really have nothing to do.
So we had turkey and homemade stuffing and cranberry sauce.  Also roasted carrots (ours), green beans (also ours), sweet potato casserole, and brussel sprouts.  I made some gravy, but that was all I had to do (well other than clean up afterwards).  The meal was great, and we had a much better time that this picture indicates. 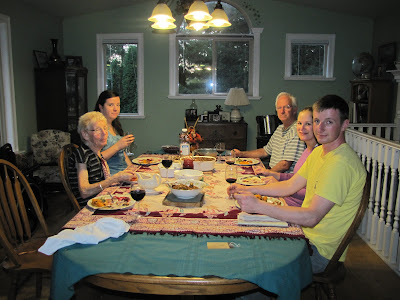 David and his girlfriend headed back to her place, and dropped my mum off on the way.  They left just in time for me to be able to sit down and catch 'The Amazing Race.'  You'd think I'd planned it that way!  It worked out about as perfectly as it could.

Larry came in that evening after closing up the coops, and reported that there were patches of chicken feathers all over the south chicken field. 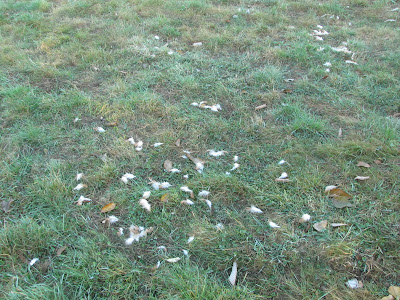 We went out the next morning and had a better look.
I know who these belong to. 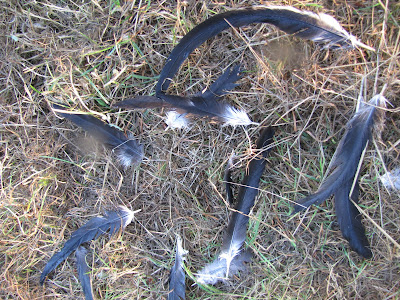 Our wary little banty rooster had one close call, and has an almost tailless butt to show for it.
It must have been his lucky day.  There were a few hens that weren't so lucky. 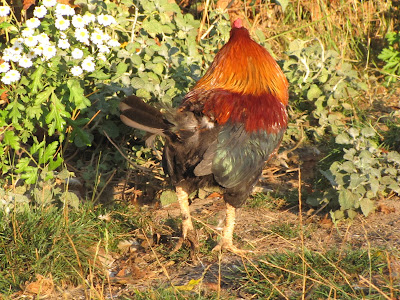 The coyotes left their calling card, at least four or five times.
Brazen buggers:(
This was probably all happening while Meredith was merrily cooking away with the music playing.  She said the dogs were barking once at a coyote in the field next door. 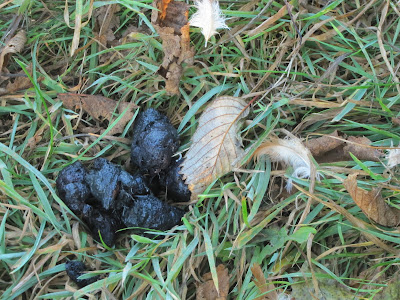 Sure enough there was another hole dug under the fence from next door's.  The hole came into the chicken field, and also into the hay field next to it.  I got a piece of the farm fence, shaped it into a blob, and shoved it and jammed it in to fill in the hole.  So far the coyotes haven't touched it. 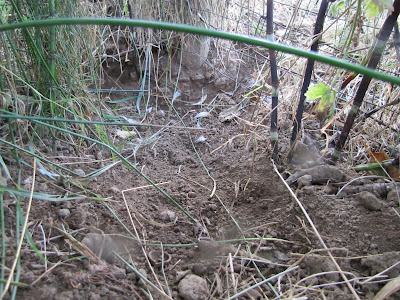 To be extra safe the chickens are fastened back into their jail, which is about 4000sq ft, compared to their regular field which is about six times that size. 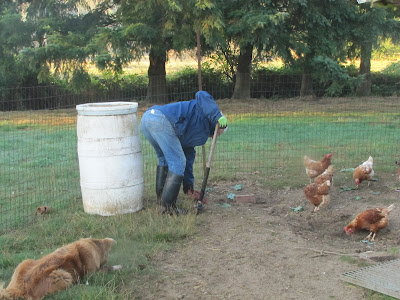 I guess the coyotes couldn't find any turkeys for dinner, so decided to settle for the next best thing.
I think they should become vegetarians.