We took our first visit to Wyndson Cottage in Oliver this week.  We were planning on leaving about mid morning, but in our usual fumbling, bumbling unorganized way, it was 2pm before we were finally leaving town.  We did get the bed and a bunch of other small stuff loaded into the truck on Sunday, and figured it wouldn't take long to load the rest into the trailer in the morning. Ha! Should know better.

The weather wasn't cooperative so we had to go and buy a couple of brand new tarps of the appropriate size to cover everything.  The only thing was that what we thought was the appropriate size was actually too big, so I returned them both on Sunday afternoon and got the next size down.  We used the 6 x 4' utility trailer that all the jam and tents and shelves and what have you that we take to the farmers market each week usually travel in.  We had an old rack thing that fit in it that made the sides higher for when we had to use it to haul sheep.  It's a multi-purpose trailer! Anyway, it was just like wrapping a big rectangular present, with lots of places to hook bungees to, so that part was easy.  The truck not so much.  The bed didn't quite fit flat in the back, so was at an angle, and there wasn't always an appropriate place to attach the bungees to.  Larry had it roped and bungeed as best he could. (I had nothing to do with the whole tarping process, I must have been busy doing something more important. That's my excuse and I'm sticking to it!)

We made a stop on the way out to buy some pipe insulation to fit around the rope so that it wouldn't rub the paint on the truck.  Then another stop in Abbotsford to sort some insurance out, and finally we were on our way. Or not.  Less than half an hour out and we had to pull over because the tarp on the truck was rearranging itself, and flying down the freeway at 100+ kph wasn't helping.  We had to pull over in a hurry.  OMG.  All those big rigs now flying by us at 100+kph, just a few feet away, was positively frightening.  We got it fixed, we thought, and I said that if we had to stop again, lets not stop on the side of the freeway.  A few minutes later, as I'm staring into the passenger door mirror, I see a rope flying in the wind, and a piece of pipe insulation disappear behind us.  Once again we had to pull over right NOW!   Fortunately this time we had a couple more feet between us and the traffic.  Seems the rope that had passed through the wheel well with about 6" of clearance from the tire, had burnt through.  Probably as the truck bounced, the tire had caught the rope enough to burn it through.  Well doesn't matter, things were coming undone again.  So ropes and straps were once again rearranged.  We set off again, both of us watching their side through the mirrors.  We made one more stop, our choice this time, and pulled off at an exit to move a couple of bungee cords to stop the last flapping part.  I thought we were never going to get to Oliver.  Thankfully after that, it all went well.

We were supposed to meet the realtor at his office to pick up the house key, but in the end we met him on the side of the highway, as he was at home by that point, and drove down to where his street met the highway when we let him know we were close.  So we arrived at our cottage about 6:30 in the rain and dark and blustery winds.  We ate some expensive potato chips and come nut cluster thingies that were in a welcome basket while we unloaded the truck.  The plan had been to arrive in time to go and buy some groceries, but we had to make do with a box of cereal and some milk from the drug store for breakfast the next morning,  and can of soup to go with the chips for supper.  The next morning dawned bright and beautiful and sunny, the perfect Fall day.


Standing in the backyard looking northwest. 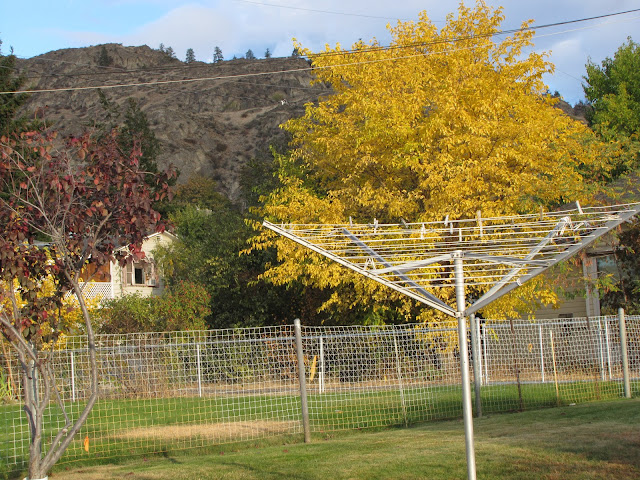