David is passionate about Land Rovers.  A few years ago he bought one, proceeded to take it to pieces and rebuilt it, but it wasn't quite what he wanted, so he eventually sold it.  His passion waned for a while, but then the flame was fanned, and it is burning strong again.  Luckily for him, our neighbour is also a Land Rover lover.  And luckily for David, he offered a Landrover to him to use on some outings that the Land Rover club held.  He'd been out twice, the first time with Larry as co-pilot, and the second time with his girlfriend.
There are pictures of those outings here.  Notice the cool sleeping arrangement:)
http://roverlanders.bc.ca/gallery/view_album.php?set_albumName=album386
http://roverlanders.bc.ca/gallery/view_album.php?set_albumName=album383
For a long while now he has been looking for his own Land Rover.  The selection here is somewhat limited, and the prices are high.
But.....go to the home of the Land Rover, and the selection and prices are much better.  After doing a lot of research, he figured that in England, he had more chance of finding a Land Rover that fit his dream, and at a price he could afford.  Add on all the shipping and governments holding their hands out for their share of the pie, and it still wasn't going to cost any more than what he would pay here, IF he could even find one that he liked.
He found a decent price on a flight to England for an eight day stay, asked Meredith if she was interested in coming along, and off they went.  They landed at Gatwick, picked up their rental car, and headed north.  Since it was cheaper to rent a car under Meredith's name since she was the eldest, she drove first.  I give her a lot of credit.  A strange car, steering wheel on the right, driving on the left side of the road, in a torrential downpour, and the car being a stick shift to boot, I'm impressed.  She said she stalled it once and got honked at three times for not getting going fast enough, and proceeded to drive 200 miles north to York, and then she never drove it again:)
Since the first Land Rover David had arranged to see was in North Yorkshire, not far from Harrogate where I was born, I asked them to have a look around at my old stomping grounds.
Here's where I lived until we headed to Canada when I was six. It looks pretty cute.  It's what is called a semi-detached, and what would probably be called a duplex here. Kitchen, bathroom, front entrance and bedroom across the front. Another bedroom and living room across the back, and small entry porch on the side.  Detached garage at the end of the driveway. 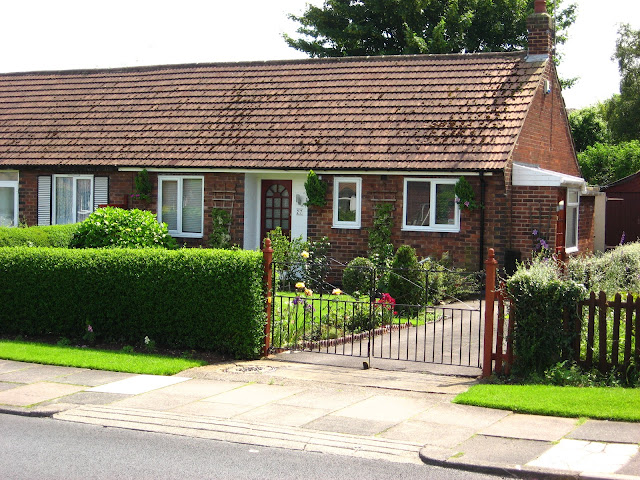 When we lived there, there was a farm behind, but now it's more houses.  Sometimes the creek used to flood, and water would rush down our driveway and come in through that side porch.  My mum had one of those incidences to deal with on her own after my dad had left for Canada before we did.
My dad grew up in the next town over, called Knaresborough,  about three miles away.  They tried to see his old house, but the GPS led them astray, so they didn't actually find it.  That's okay, I found it on Google street view.
Knaresborough is a really quaint, picturesque place, with loads of history, not that there's probably a place in England that doesn't have a long history.  Here's a shot taken of the railway bridge, that was finished in 1851.  It had collapsed before they had quite finished building it three years earlier, so they just set to and built it again. 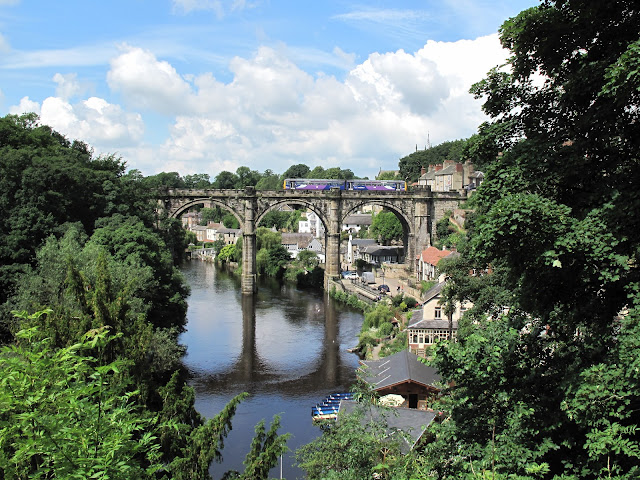 In Blackpool, they found this little reminder of home 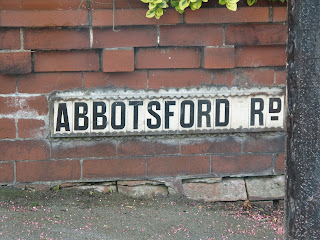 And stopped to watch a horse show held in a not very flat field.
What gorgeous ponies they have. 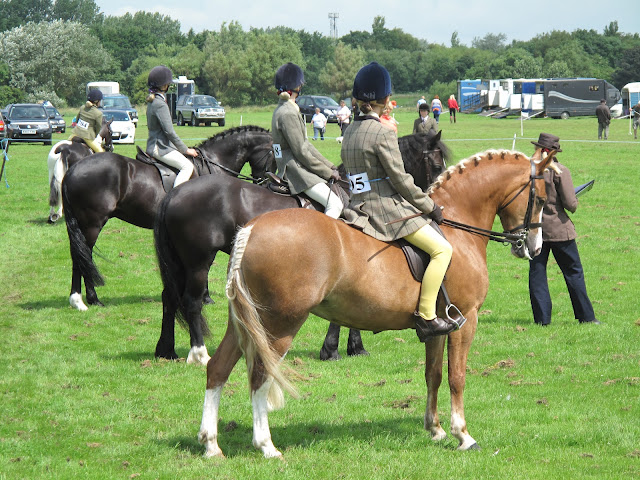 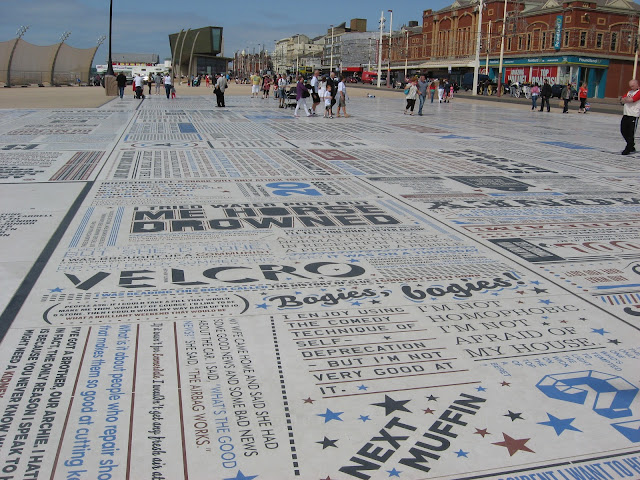 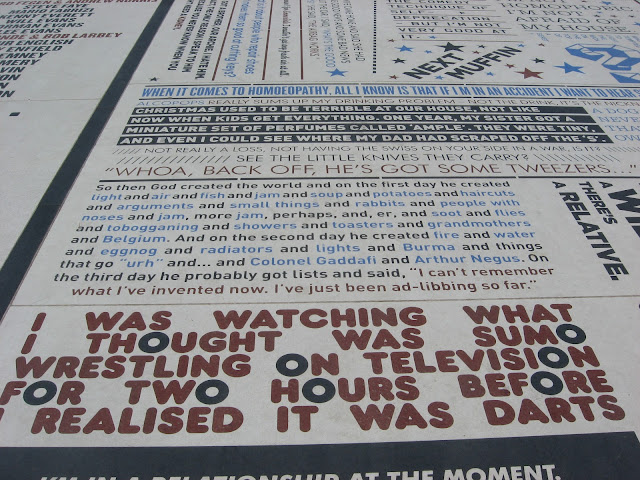 In Nottingham they posed with Robin Hood 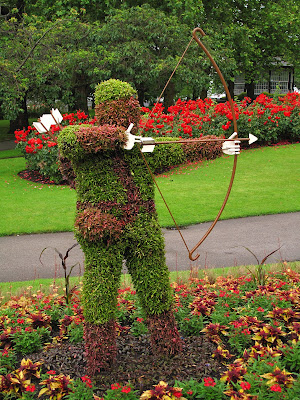 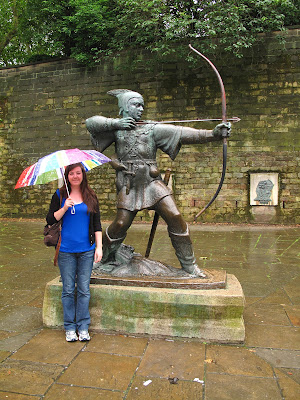 Neither were as good looking as the Hollywood versions
They had a wonderful visit with my cousin Julia and her husband Peter.
Those are their dogs, Prince and Charlie.
Aren't they Bonny? 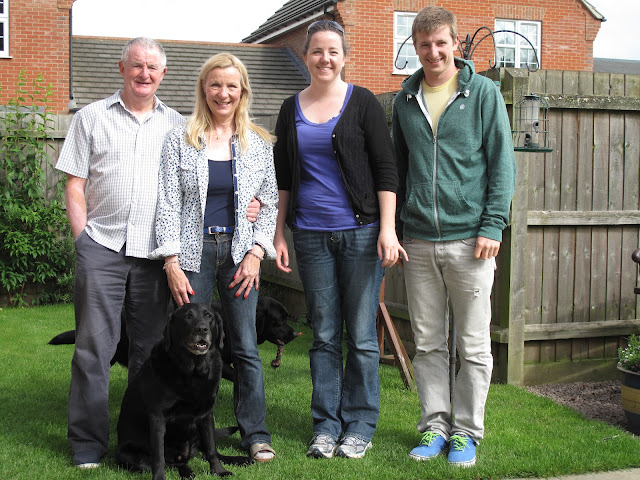 Since David and Meredith's non-English half is of Icelandic heritage, they got a kick out of this store, which sold groceries. 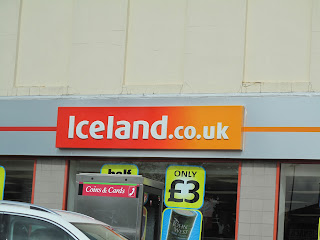 And here it is.....
THE Land Rover.
It seems small, and kind of cute I guess:)
David actually 'won' this in an eBay auction a few days after they arrived.  He slipped that last bid in just 12 seconds before the auction closed.   When he went to see it, there were no unpleasant surprises, and the owner had all the service records. 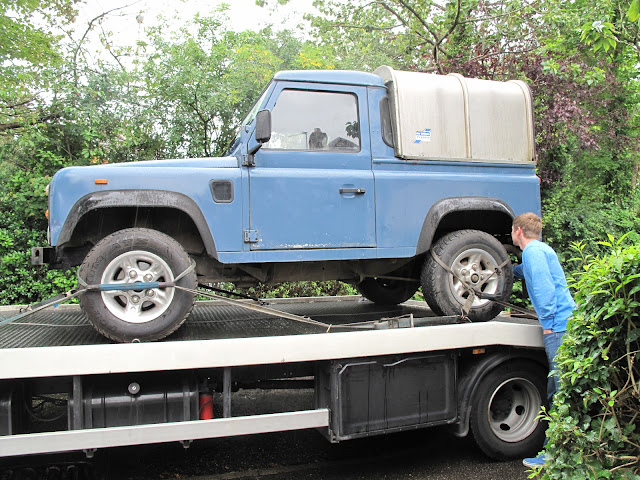 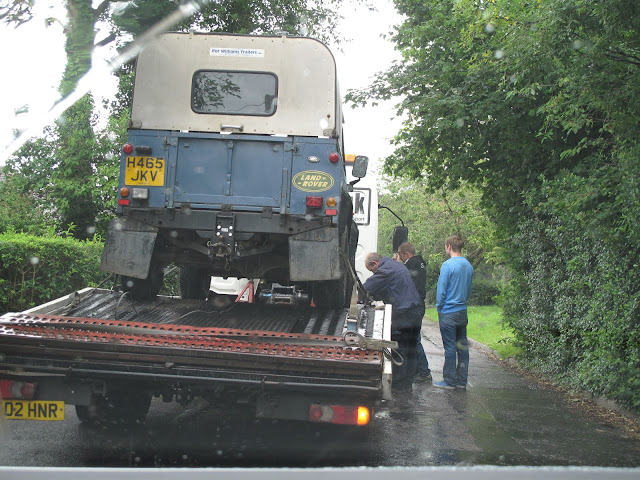 Fortunately it was only about 40 miles from the port at Southampton, and the tow truck driver knew exactly where to take it when he got there.  So there it sat ( I think it needs a name, any suggestions?) parked with a lot of other VERY expensive vehicles, all waiting to be shipped to Tacoma, Washington. Just a measly $290,000 for that Rolls Royce. The Land Rover left today, and will arrive in just under four weeks. 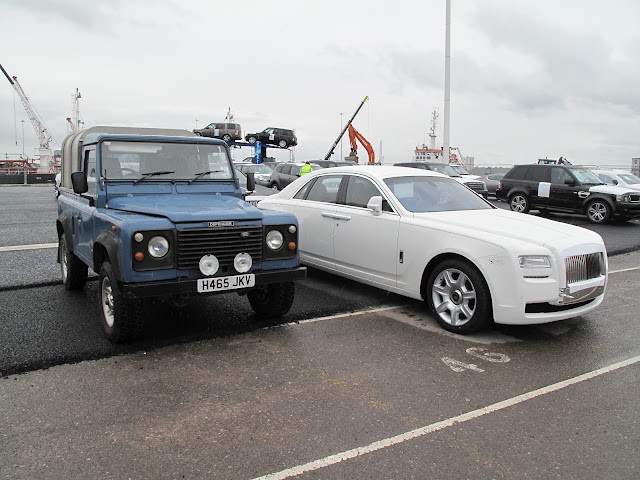 To add to the stress of trying to get everything arranged in the last day, the cellphone company was having trouble with their service, so his cell phone wasn't working, and he was having trouble with his laptop and the wireless as well.  Nevertheless, he managed to get it all sorted out.
And Home Sweet Home, or almost.
Coming in over Vancouver, almost at the airport. 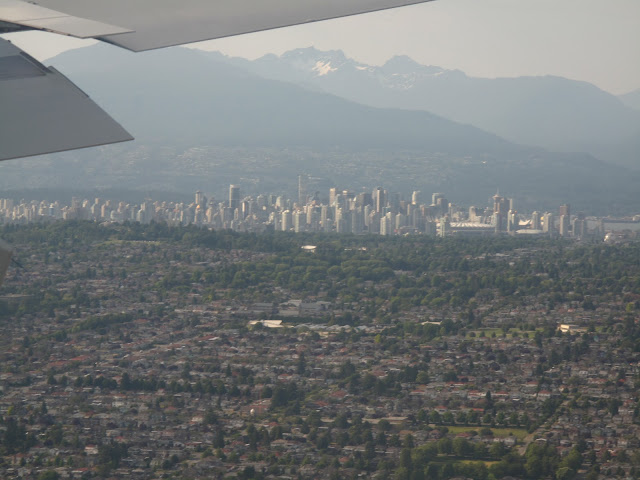