There's something very interesting in here 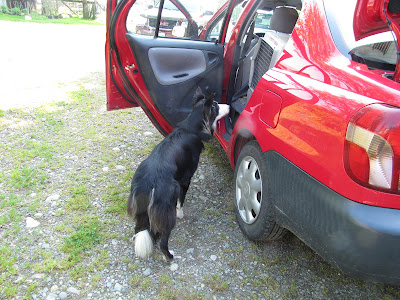 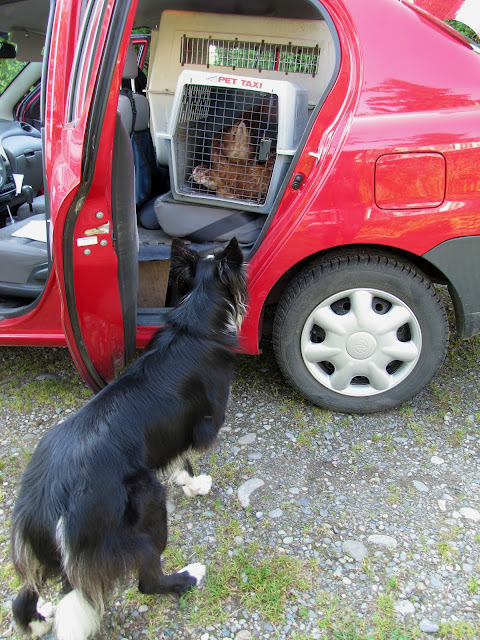 And there's some in the trunk too! 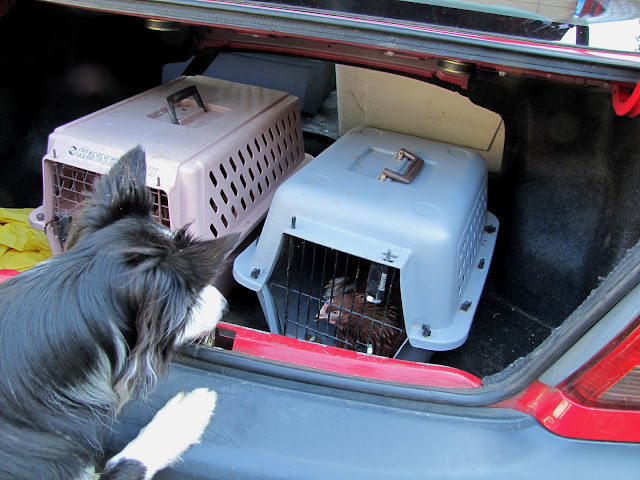 When a certain family member, who is not known as Larry, decides to give a too close introduction of the truck door to a concrete pillar while visiting her mother, and the truck is now in the body shop being fixed, sometimes you have to 'make do' with your farm vehicle.
So how many chickens can you fit in a Toyota Echo?  And those dog crates make excellent chicken crates.  All the crap is contained, and they wash out easily with a hose.
This could have been another repurposing post, for both the car and the crates.
We were only picking up 20 new pullets, although had been on the list to get 54.  We were supposed to get those 54 in April, but just got the phone call last week.  Since we are now in the middle of market season, and our coops only hold a finite number of birds, I had to say no to the 54, and am just going to try make it work with 20.  To take the 54, I would have had to get rid of the birds we already had, which would have meant that we'd have no eggs from that coop for a few weeks until the new birds started laying, and some unhappy market customers.
Generally I ask for the first lot of hens in March, and sell the old hens from one coop, and put the new ones in there.  In April I do the same with the other coop.  Then our first farmers market starts in May, we have enough eggs to sell at that one, and by the time our second market starts at the end of the month, the second batch of hens are laying as well.
But this year I didn't phone in March like I usually do and ask when the pullets were going to be ready.  So I didn't get called until the end of April I think it was.  And then the call for the second lot didn't come until last week.  So... lesson learned...the squeaky wheel gets the grease.  Remember to phone the hatchery at the beginning of March next year.  I had my name put on the list when I was there today.
Because these 20 hens are going into the coop with last years hens, we wanted to be able to mark them so we can tell them apart in the Fall. The usual way is with leg bands. We have bought the spiral ones before from our local Co-op.
They can be a bit a awkward to get on, but do expand a bit if the hen's leg gets bigger than the opening in the band.  A few times I've had the point at the end of the band get caught on the leg and the leg starting to grow around it.  It was an ugly mess
The cheaper, easier way is to just use zip ties.  Since these birds are close to fully grown, we just put the tie on loose, and cut off the extra length. 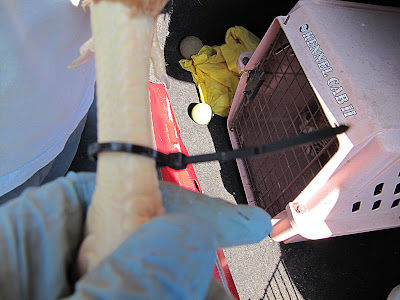 We finally figured out a routine.  Larry was the chicken wrangler, and I was the bander.  We ended up doing most of the hens in this position.  Some of them just wouldn't settle when held by the legs and hung upside down, (which is the standard method of carrying chickens).  You should see the guys at the hatchery come walking out holding 5 chickens in each hand.
And it's probably the first time this hen had been out in sunlight, as they are raised in barns. 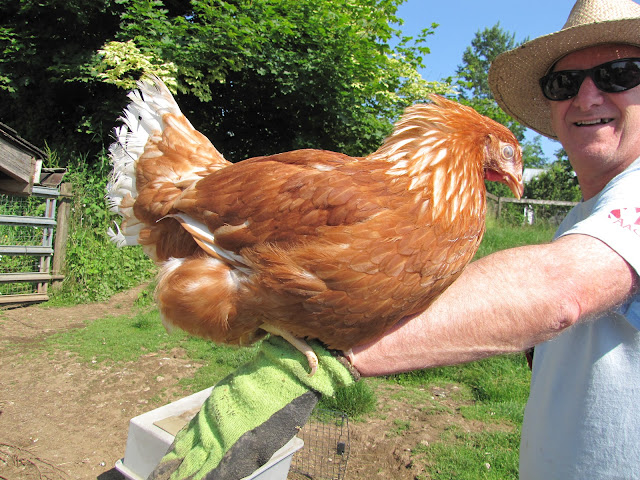 Larry learned quickly, after a few close calls, that's best to have the back end facing away from you.
It's called projectile crapping.
When we grabbed the first hen, she screamed blue murder, and a bunch of the old hens came running, wings  spread and feathers fluffed out, all ready to attack Luna, who didn't even notice.  She was focused on the screaming hen.
They never want to come out of the crates.  If we don't have to band them, usually we just carry the crate to the coop and then tip it up to dump the hens out.  And the hens all flap their wings to stay at the other end of the crate, and generally you have to reach in and pull some of them out.
They really do not want to leave, they want to stay with what they now consider familiar territory.
It'll be a couple of weeks or so before they start laying, which gives them lots of time to get used to being free ranging birds.  As always, some of the birds look closer to that part of their life than others.
And here's a plug for the Toyota Echo.
We bought it with 115, 000 Km on it.  It now has 256, 000 km. Other than new tires and some brake work, the only engine maintenance we have done were oil changes.  Just a few weeks ago it developed a stutter.  David changed the oil, put in a new air filter, and new spark plugs, and we are good to go.
Larry made some little bench things to fill in the foot wells in the back seat, to make one big platform back there.  The three dogs fit easily, and there is loads of trunk space.  Meredith has the hatchback version, which is cuter, but there's much more space in ours.
It's now ten years old, and we'll drive it until it dies. It gets 50 mpg on the highway.
And it makes a great substitute farm vehicle when you need it.
We could fit a sheep in it if we needed to.
Hopefully we won't.
Posted by Karen at 4:17 PM