This post was going to be titled Dreary December, because it was just that until early afternoon.  But then the sun finally burnt off the damp fog, and it was sunny.  Probably not really as bright as these photos make it look, but I'll take sunshine in any form at this time of year.
When Larry picked up his runners so he could head out to the store, the dogs all went nuts because they thought  THEY. WERE. GOING. FOR. A. WALK.
Yep, picking up your runners in the afternoon can surely only mean one thing, it's walkies time.
Since they'd had a good run through the bush this morning, and then I'd taken Jake and Luna with me on my two miler cardio walk/run (okay, mostly walk) just before lunch, I didn't really feel like taking them on another one. So it was time for a game of dumbball .  Out to the hay field we went.  Each dog had it's own ball, and I had the chuck-it.  It all went well at the start, but then I didn't like the fast stops, try to grab the ball as you skid by, somersaults, that Jake and Luna were doing, so I started lobbing the ball high.  The idea being that the dogs could get a good idea where the ball was going to land, and probably be relatively in position before it got there.  Sounds good in theory, but most of the time they didn't look high enough, and if they were looking the wrong way, they didn't see the ball at all.  The grass was too long so the ball didn't make much noise landing, and it didn't bounce.  So we seemed to spend a lot of time looking for missing balls.  When I started walking out to get the dog looking in the right spot, the other border collie would come with me, but would leave their own ball behind.  So now there were two balls to find.  Let's just say that the adjectives coming out of my mouth will not be repeated here.  Thankfully it wasn't too long before I figured they'd had enough.
Classic Jake pose 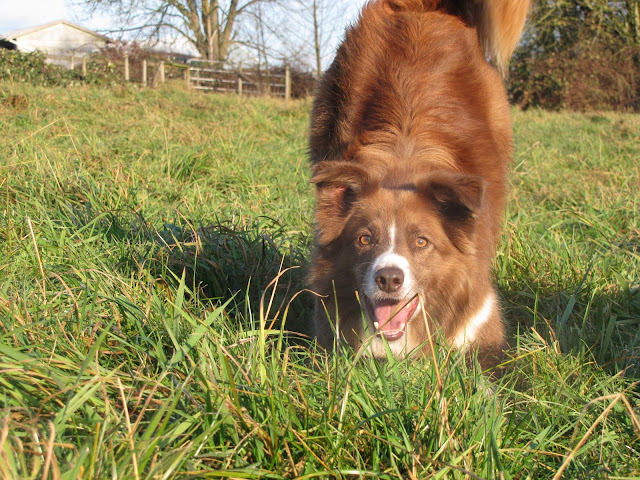 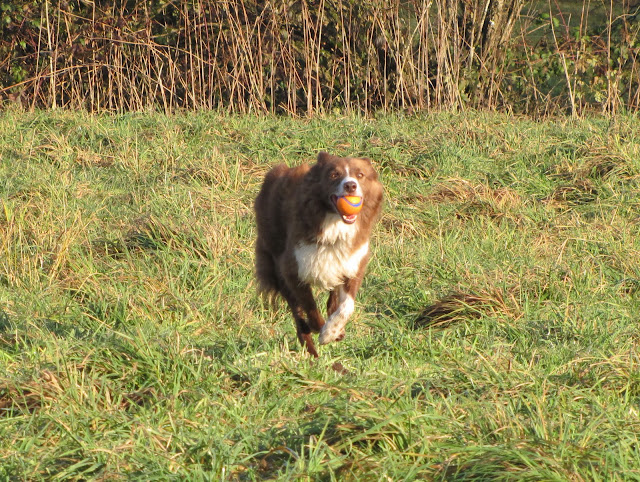 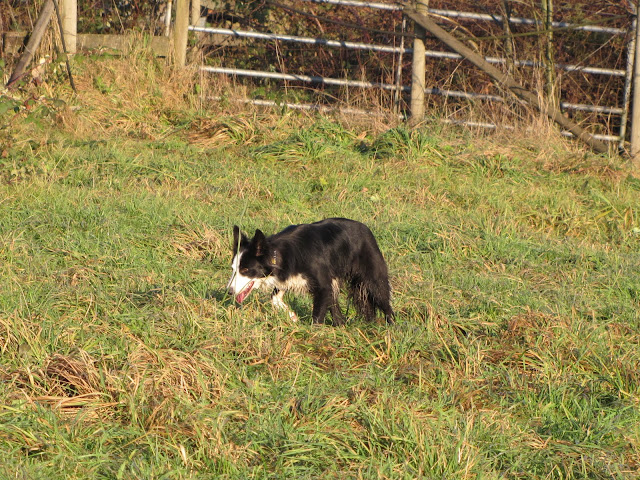 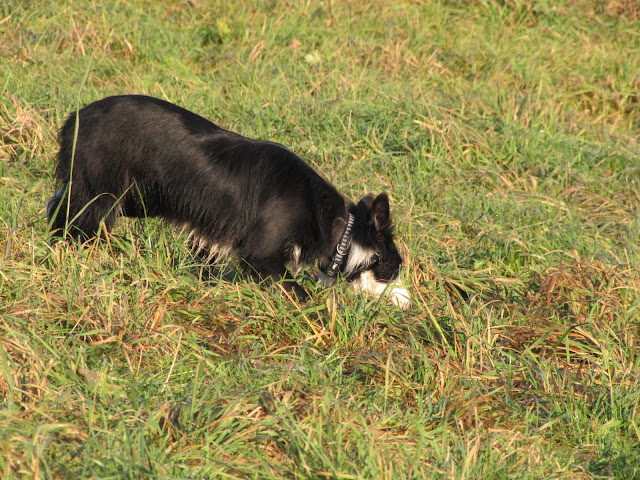 I've got mine too! 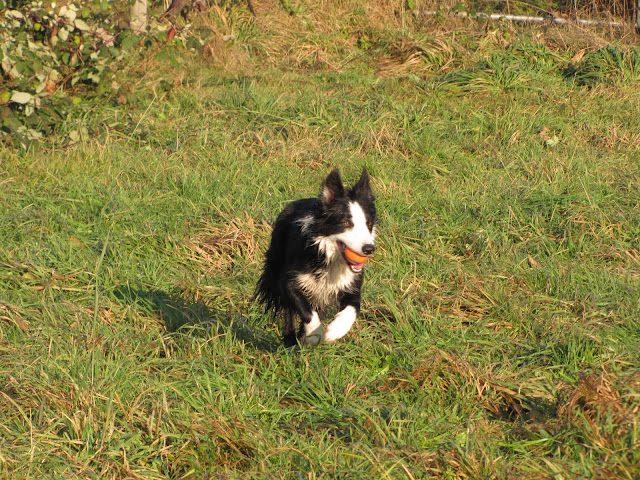 A couple of tired dogs 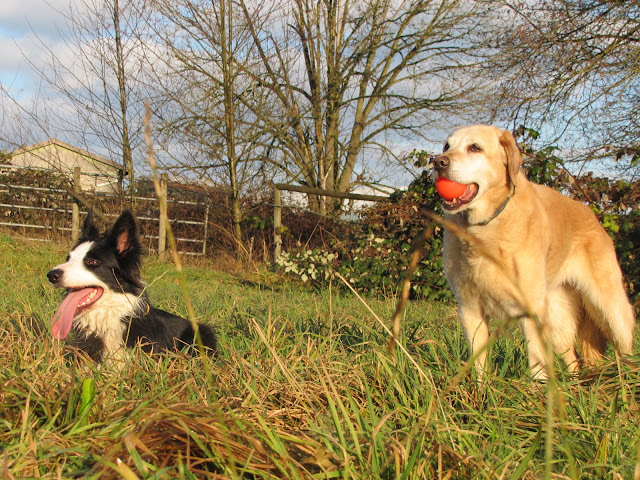 Out in the back field, Pride was laid out in the sun having a nap.  Every angle that I tried to take a picture from, had a fence post or fence rail in the way.  I ended up too close and he decided it was time to get up. But first he had to roll.  He rolled over two times. 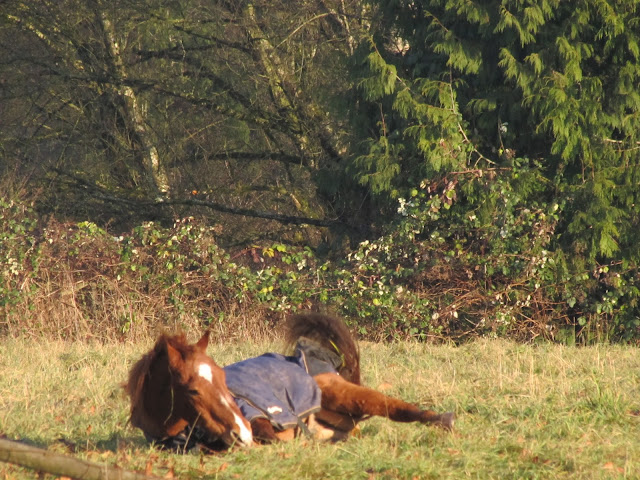 Before he got up to shake. 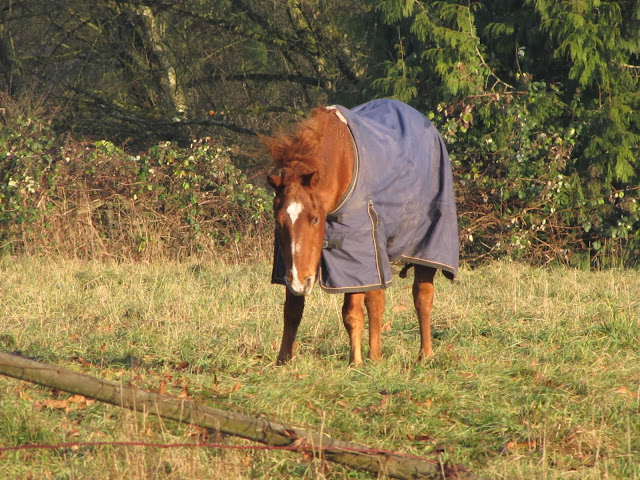 The hens enjoyed the sunshine too. 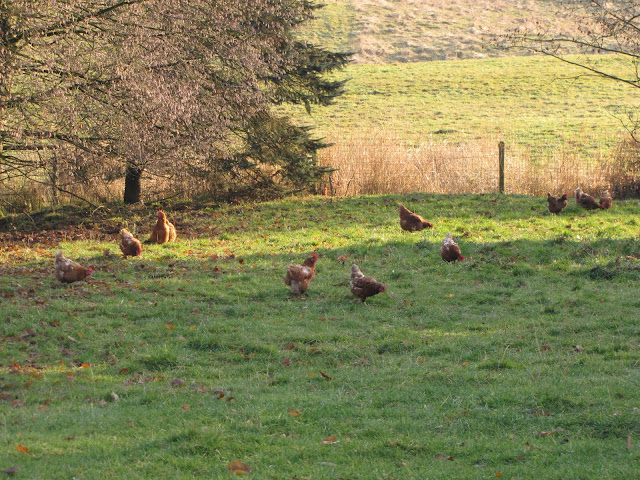 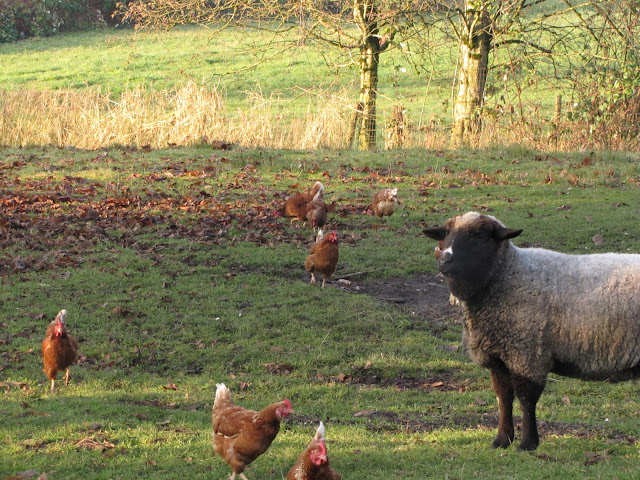 Seems we might get some snow on Tuesday.
Posted by Karen at 5:52 PM