Climbing Towards the Light

My mental image of this time of year is of slipping down a long slope into darkness, with Christmas being in the bottom.  After Christmas, I am then on the up slope, climbing up towards the light.  I think this year I've felt the shortness of the days more than ever.  Not so much the darkness at the end of the afternoon, but more so the mornings.  On a cloudy, dreary December morning, and we get a lot those, it isn't really fully light until about 8:30, and I feel no urge to leap out of bed much before then.  Sure, there are lots of mornings when I can't sleep, so get up before it's light, but only because I'm so sick of tossing back and forth, that's it's actually more comfortable being out of bed.  I was always a morning person, and I want to stay that way, but right now I'm finding it really hard.
Anyway, not that I wanted to rush the days along, but it is nice that we've finally passed the shortest day of the year.  The winter solstice happened at 9:30 pm on Wednesday evening in our time zone.
We have been lucky, and the two shortest days of the year have been clear and sunny.  Makes for some frozen, frosty nights, but at least we can take full advantage of the daylight hours. 8 hours and 13 minutes between sunrise and sunset today.
Sun and frost this morning 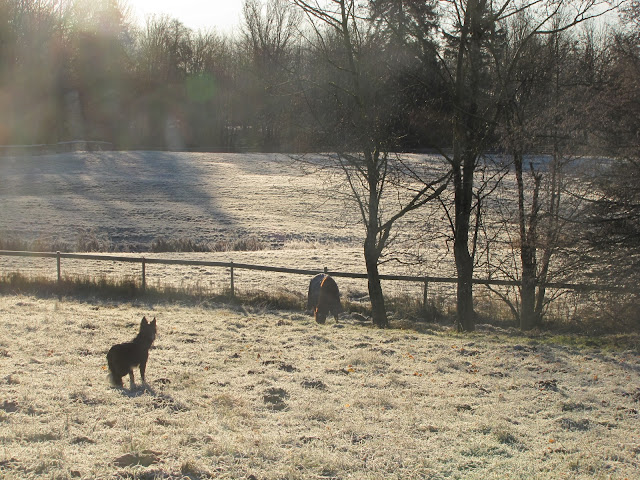 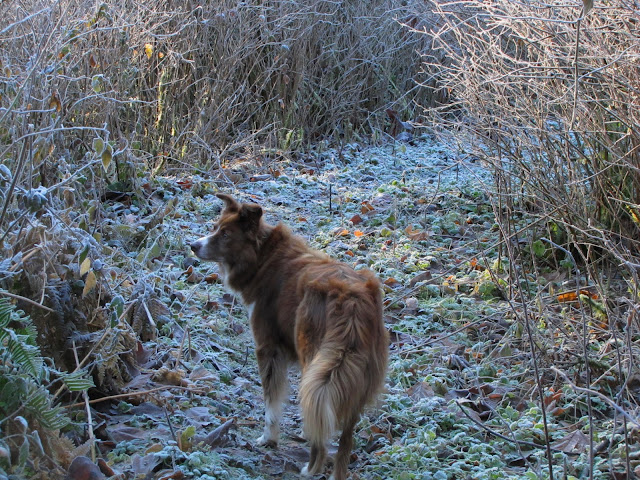 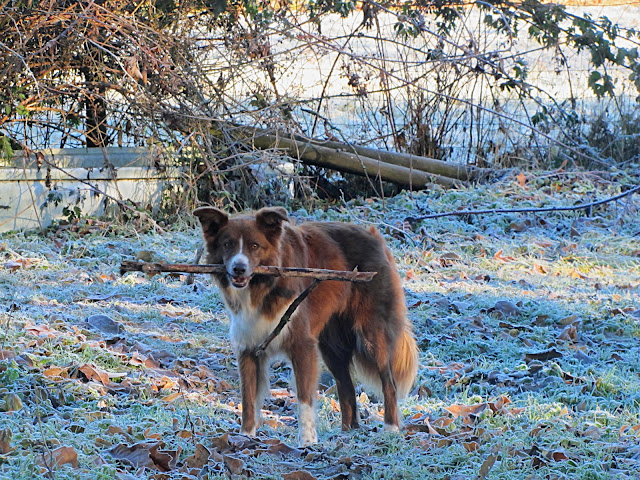 On the Christmas front.....
Well the tree is finally decorated.  The actual tree has been up at least a week, but we couldn't seem to coordinate all the family to get together to decorate it.  It's been done in bits and pieces.  As a person passed by, they might just stop and load a box of ornaments onto the tree.  It has so many lights on it that it needs lots of ornaments to cover up some of the brightness.  For years we used to get a real tree, take the trip out to a tree farm.  We dug quite a few up, and planted them on our farm after Christmas was over.  One year we broke a shovel digging up our tree.  We cut a few down.  Then one year,  there was a deal on an artificial tree after Christmas that we couldn't pass up.....so now we've gone to the dark side.  Well actually it's more like the really bright side.  A fake tree with the lights already on it, a really really lot of lights. 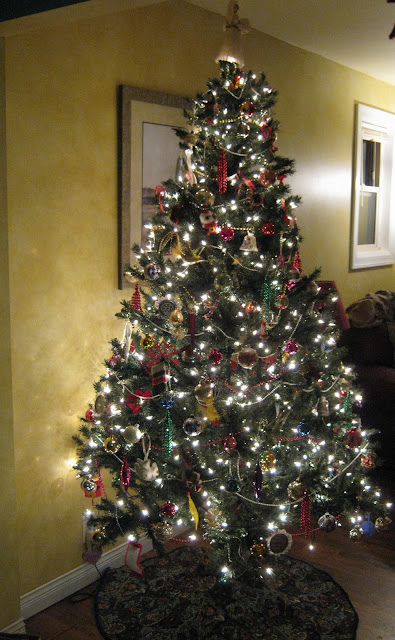 We've even done some Christmas baking.  Usually I don't do much, because then I eat it, and eat it, and eat it. No will power.  If I don't make it, I can't eat it.  This year I broke down.  Rum balls:)
Easy Peasy recipe.
From Canadian Living magazine.
3 oz or 3 squares unsweetened chocolate, finely grated (Try not to get any fingernail pieces in the mix)
1 cup ground almonds (I ground up blanched sliced almonds in the coffee grinder.  So what if a few stray coffee grounds got in the mix)
1 cup of icing sugar
1 tsp vanilla
1/4 cup of rum.
Mix it all together.  Put in the fridge to firm up, maybe half an hour or so.
Roll into little balls
Roll the balls in some more rum to moisten, and then roll in the covering of your choice (sprinkles, chopped nuts, coconut)  This is the step that takes the longest.
I doubled this batch, and ended up with about 60 rum balls.  Probably would have been a few more if I hadn't been eating the batter as I was doing it. 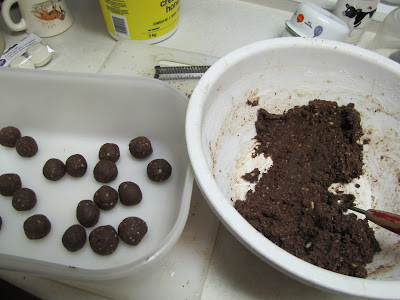 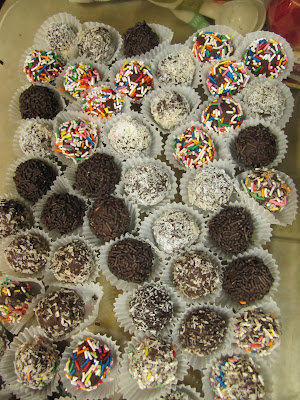 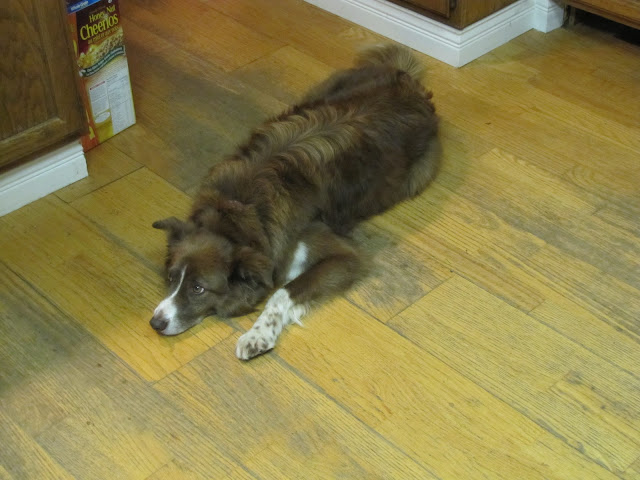 Other family members took it easy.  Not sure where Luna was, but probably breathing down Smudge's neck somewhere.  She did keep popping in just to make sure she wasn't missing anything. 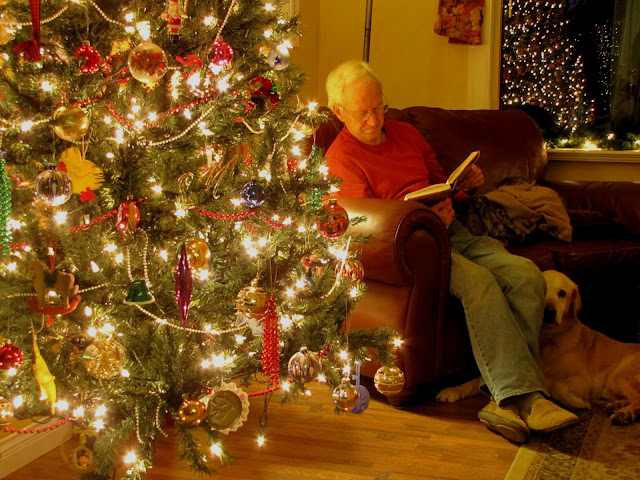 Meredith was in on the act too.  She got the cakes made for the Christmas Day trifle, and then made the rounds for the Vinatarta.  That's a layered cake made with a prune filling that was made by the Icelandic people in Manitoba.  We decided to give it a try, in honour of Larry's mum, who used to make one every year.  Larry's dad's family came from Iceland.  Not sure which recipe Larry's mum used, so I used this one. A lot of the recipes didn't seem to bother with cooking the prunes with rum, they just used water.  I think we probably wasted the two cups of rum, as I couldn't taste it in the prunes after.    It's all been layered together now, and we'll leave it sitting for a while for the flavours to meld and the biscuity cake layers to absorb some of the moisture.
I'd better crank up the exercise routine. 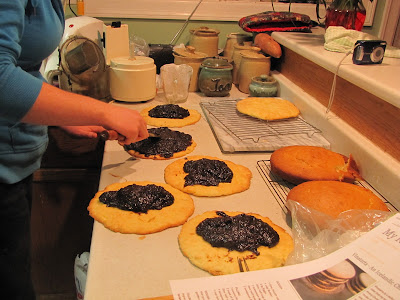