Give Them an Inch

And oh those blackberries will take a mile.  I often joke that if we did nothing about them, in five or ten years (depending on how frustrated I'm feeling about them at the time), our place would be just one giant blackberry patch.  I do pick a lot of blackberries, and it's really handy just having them on our own property, but it's a constant battle to keep them under control.
Last Spring David had cut off at the ground, a giant patch and it's off-shoots that were growing along the fence between the hay field and a driveway that went between that fence and the riding ring fence.  We had kept cutting them back for a while last year, and then had eased off, and now they were well on their way to taking over again.  It was a nice mild morning, no rain, so I figured I would give the loppers that I got for a Christmas  present a workout.  I have no issue with getting a practical gift for Christmas.
They had nice long red handles.
All tools should have brightly coloured handles.  That way when you put them down and then forget about them, it's much easier to find them.  David gave me the loppers.  Maybe it was his way of telling me to get cutting the blackberries back myself.  They cut like a hot knife through butter.  By the time we were done though, and had several times attempted to cut through the fence wire as well as a blackberry cane, the blade edges didn't look quite as smooth as they did at the start. 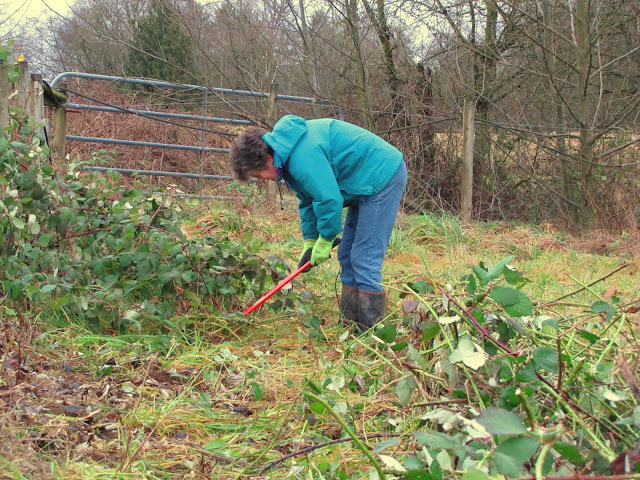 Every year, the plants send out new shoots, that will bear the next year's berries.  Some of those shoots are as thick as a man's thumb, are covered in thorns, and can easily go 15 ft or more.  They arch up and over the previous year's growth, and then when they touch they ground, they start forming roots, and that's the basis of whole new clump 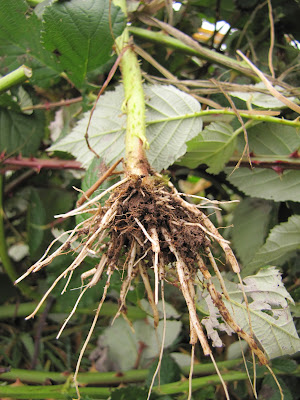 Because these particular blackberry clumps had never been that great to pick, they had never been cut back much.  Usually as you are picking the berries one year, you have to cut the new canes back, because they are in your way.  In that way, the clump is kept under control to some degree.
We kept switching off.  One cutting and the other pulling the canes back far enough to be sure that they were all cut off at the ground. 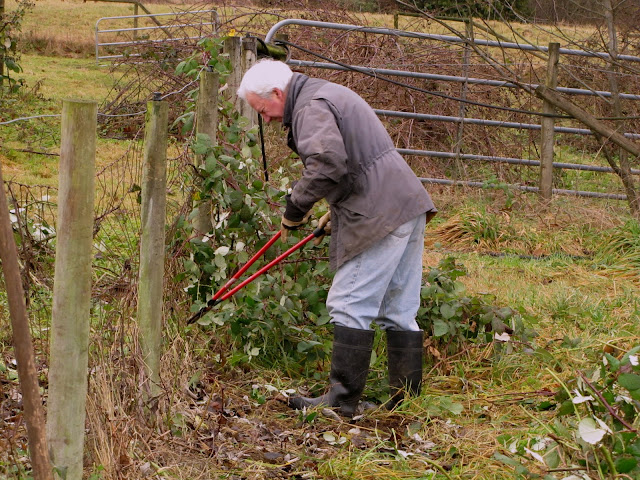 Jake and Luna figured they had us sort of trapped, so they kept bringing us their toys.  Eventually we got smart and started  throwing them over the fence.  Then they had to run to the other end of the field, through  the gate and back up the other side of the fence.  We gained  a few seconds between throws (or kicks) that way. 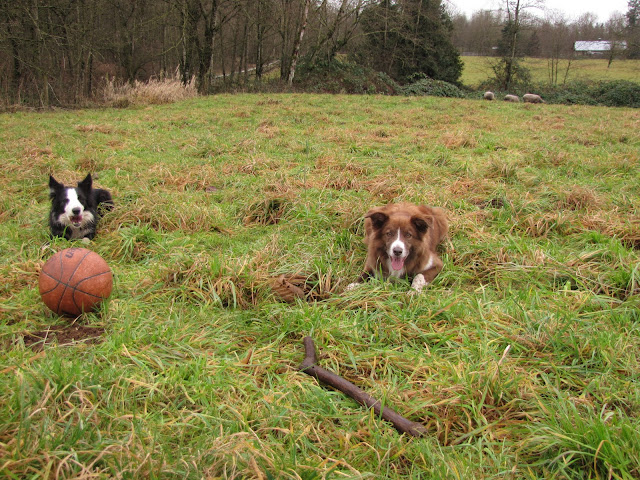 Just after we were finished, the rain started  (again).
Posted by Karen at 6:36 PM