Last Friday we got back home, in the pouring rain, from a week in the Okanagan.  The rain reminded us that it was one of the reasons we had started looking at the Okanagan as a drier alternative.  The weather certainly wasn't great while we were there, there was only really one nice sunny day, and it did rain at some point on a few days, but a rainy day there is usually not as wet as it is here.

We did get out for a couple of bike rides.  Wednesday we drove from Oliver to Penticton and parked in a mall in the middle of town, and headed off on the Kettle Valley Railway trail.  Of course it is a railway no longer, the tracks have been removed and it is a nice wide gravel trail with a gentle grade.  After all, trains have to head up hill very gradually.

On Tuesday, the forecast for Wednesday was for sun, but when Wednesday morning rolled around, that had all changed, and by the time we got going, it was just cloud.  The temperature was only a few degrees above freezing, and there was a decent breeze, which was only a few degrees above freezing too. Not the best of days, but it was almost Decermber, so we couldn't be too picky.  Our 'cycling in cold weather' wardrobe was a bit limited, especially for Larry.  I did have a narrow pair of 'fleecy on the inside', pants, that I convinced him to wear.  I put on some tights and then nylon pants over.  We layered long sleeves and vests and jackets, and then two pairs of gloves each as we didn't have mitts. We took a scarf along 'just in case'.  We have lots of clothes at Oliver, but not every possibility is covered.

Now I have to apologize for the picture quality.  The camera was set on tungsten lighting for indoor shots.  I did remember to change it after the first photo or two, but obviously forgot to push 'set', and the camera just went back to the tungsten setting.  I fiddled around with the photos to try get rid of the bluish cast, but wasn't very successful. It was a rather gray, blah day anyway, so that didn't help.
I suggest you click on the two links to see the pictures I found online.

We were riding between lots of old vineyards at the start.  I liked how they had each plant going in two directions.  The new vineyards don't seem to do that. 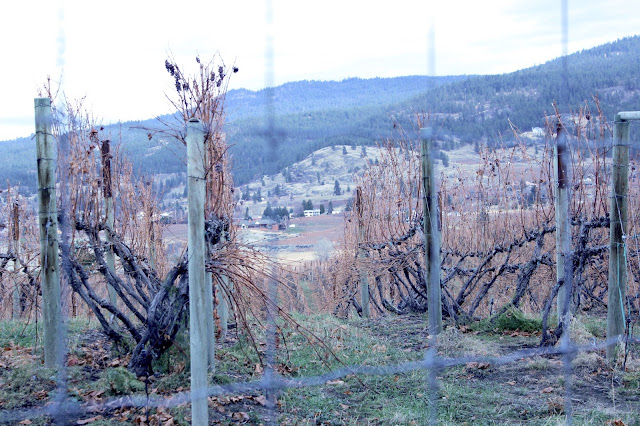 The McCulloch Trestle, it has been rebuilt. 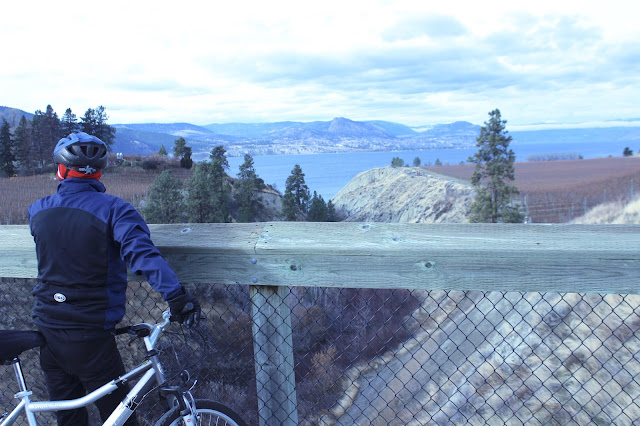 And then we came across this cute little store.  The sign on the fence by the gate said Ambrosia Apple Slushies.  We laughed because something cold was the last thing we wanted.  The owner was out there and we waved at him.  I said to Larry that I wondered if he had any hot drinks....Next thing he is shouting to us to come in for a hot drink.  I say I don't have any money on me, does he take VISA, and he shouts back that it is cheaper than VISA, it is on the house! 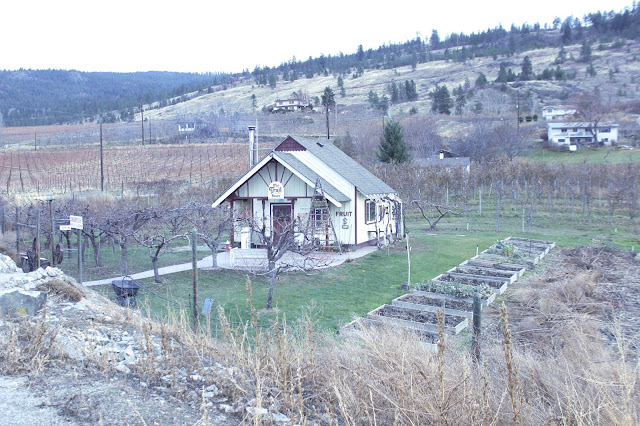 So we sat at a little table next to the old scale and the bowl of apples, and chatted with Rod for about an hour.  Talk about a small world.  He used to have a Christmas Tree farm about ten minutes away from us in Abbotsford!  We bought blueberries from the property next door to his for years. 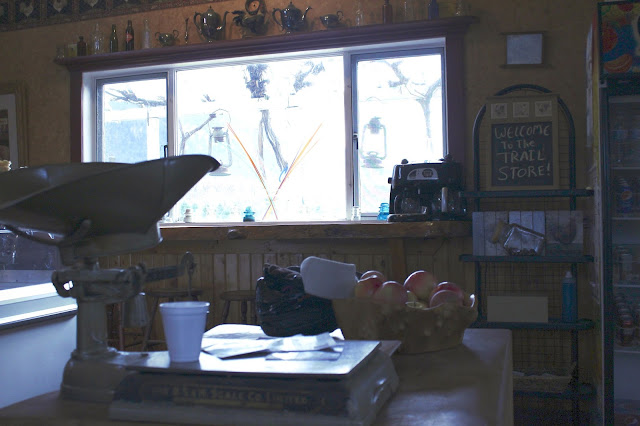 It was nice and warm in there and there was a little woodstove going.  Larry warmed a pair of gloves above it.  Rod pointed out the slushy machine and told of the story of how he used to buy a mix that was poured into the machine to make the slushies.  How one day he decided to read the ingredients, which were mostly sugar, along with chemical flavourings and red colourings.  There and then he decided he couldn't continue feeding that poison to the kids.  So he decided to try making slushies with the juice of his own apples, and has never looked back.  It was a fascinating visit and really made our day. 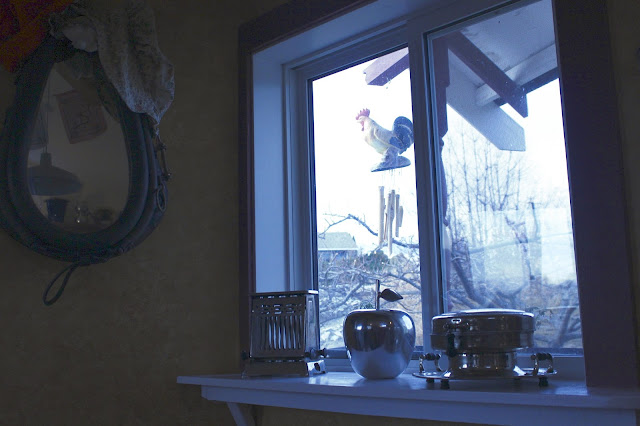 You can Google 'The Trail Store' and there are stories of Rod and his generosity.

Eventually we figured we had better get back on the trail, so somewhat reluctantly got ourselves moving and on our way. 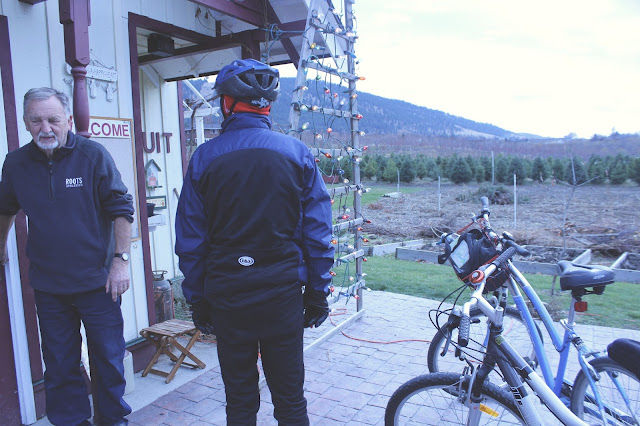 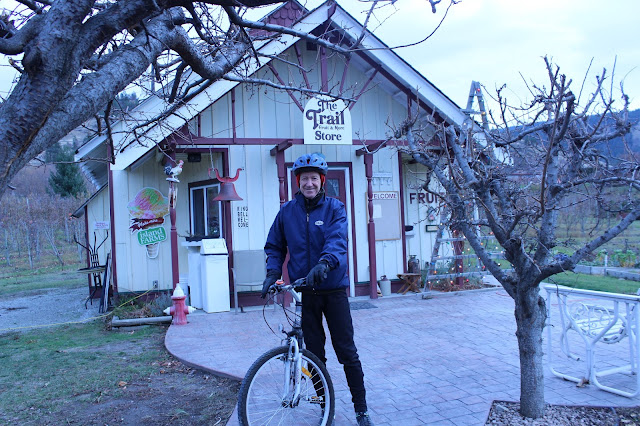 And off we went, heading north.
I did quite well to take this photo, riding with one hand and holding the camera to my eye! It got a little hairy a few times, or should I say I came close to wobbling so much I was close to crashing.  How on earth I used to ride with no hands many years ago I don't know. 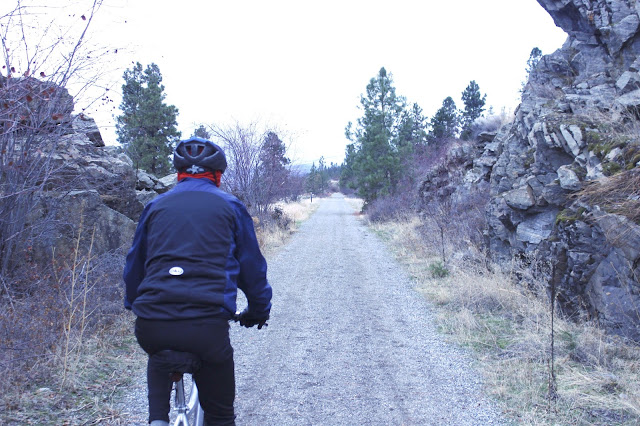 We passed a marker that said 6.5 km.  The trail goes on for miles, and we didn't really have a destination.  I suggested we go to the 10 km mark.  Well we never did see another distance marker after the 6.5 km one.  We just seemed to keep riding and riding, and finally we were at the south end of Naramata, so we decided to call it quits.  We knew going back would be faster, as it was all downhill, but we were also going to be riding into that wind.

We hadn't gone too far on the way back and had to stop and don our 'bank robber' look. Honestly, thank goodness we had taken the scarves. 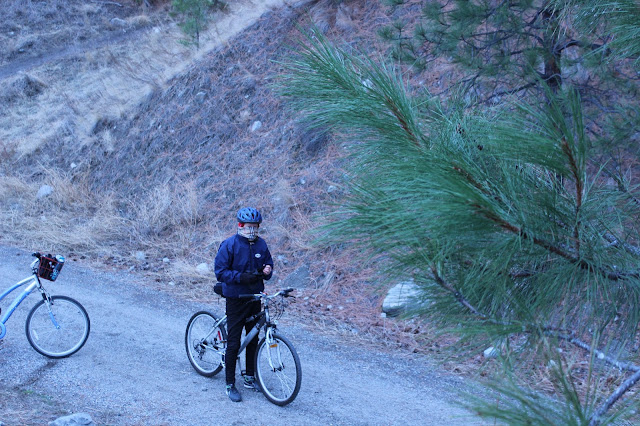 After a while we passed a woman walking up the trail. She said 'nice scarves' as we rode past.  I thought, ha, just you wait until you turn around and go back.....you'll be wishing you had a scarf too!

Part way back.  That is Penticton, in between Okanagan Lake in the foreground and Skaha Lake on the south side of it.  You can just see a sliver of that lake. A long way to go still. 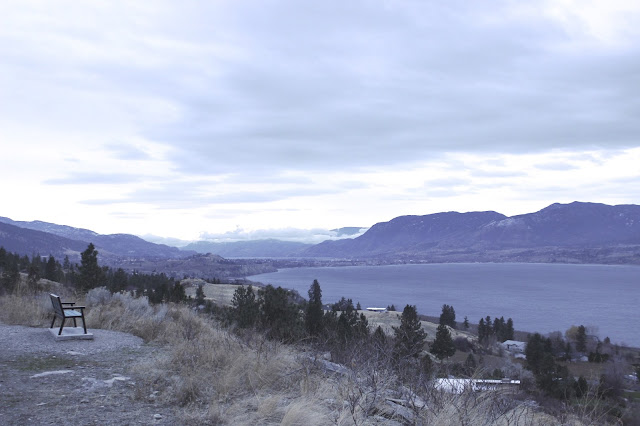 It was around 3pm by this point.  Already the light was dimming a bit.  Riding against the wind, our toes and hands were starting to freeze.  Larry asked if I wanted to stop and warm my hands, but they didn't seem to be getting any worse, so no, I said let's just keep going.  I was at the point now that the fun had gone out of the ride, and I just wanted to get it over with.  We made it back to the middle of town and the truck.  We manhandled the bikes into the truck and then sat in cab with the heat blasting.  I felt like I was in labour, panting my way through the thawing of my hands.  Gawd it was painful.

Off to Tim Hortons for a bowl of hot soup and hot coffee!

Somewhere between 22 and 28 km ridden that day. 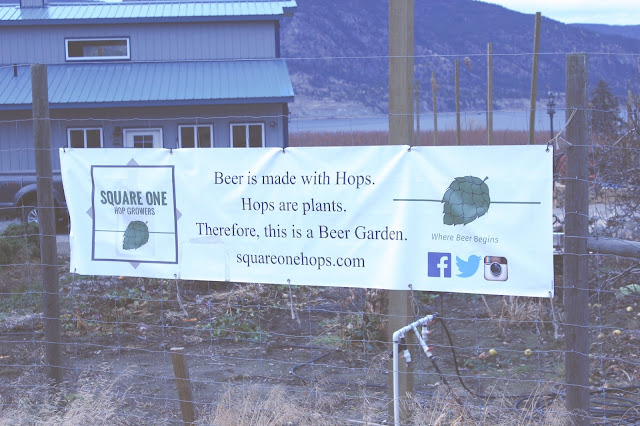