Some times I wonder why I even start posts like this.  It really probably isn't very interesting to anyone but me....And then I can't seem to keep it short and simple, I have to give you EVERY little detail... and then it seems to take me ages to actually finish it... oh well.

When we headed off to Oliver a couple of weeks ago, the truck was full of project stuff.  I don't think Larry had a project list, other than to relax and have a good time.  I didn't ask, but I didn't see any stuff loaded in the truck that wasn't either food or part of some project that I wanted to get done while I was there.

You know me, I love to buy second hand, and I'm always on the lookout for 'something'.  Often I don't know what that something is until I see it, but then suddenly the light bulbs start flashing and I think 'hey, I can use that for....'.

And speaking of light bulbs, this is the bedroom light. Maybe an original 1950's plastic shade and a more modern 100 watt bulb. 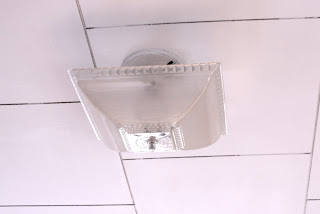 Well one day I just happened to be in the thrift store (imagine that!) and there, brand new in a box, was a fan and light fixture, priced at $10, and it just so happened to be half price day....
So after we had been at Oliver a day or two I decided that it was time to tackle the first project.  The fan was brand new in the box, but apparently the instructions had taken a hike....  We took the parts out and more or less figured what went where.  I went to Google to see if I could find instructions, and came across a Home Depot video that did the job.  It explained what to do with the extra wire the fan seemed to have.  Another interesting thing the video said was to make sure that the electrical box was very securely fastened in the ceiling, and that seemed especially important since the fan was right over the bed.  We thought it was fine, but to make sure we needed to go in the attic.  Of course that was not a simple job.  First we had to unscrew the china cabinet from the wall, shove it out of the way, so that we could get the step ladder right under the attic hatch.  Larry climbed up in the attic. Of course (because it seems no home improvement project is ever as quick and easy as you think it will be) he couldn't see where the electrical box was as there was batt insulation with blown in insulation over the top and random planks laid on top of that.  We measured, me down below, Larry in the attic, to where it should be, but still couldn't find it easily.  Finally I stood on the bed, pushed a knitting needle up the side of the electrical box and poked Larry in the eye, up in the attic.  Haha, thank goodness that is NOT what happened, but he quickly uncovered the box and yes, it was well and truly fastened to the rafters.

Another interesting thing the video said was that as long as your ceiling was at least 8' high, you should use the down rod.  Apparently the fan does a better job if the blades are at least 10" from the ceiling.  After that the job went along relatively smoothly, although it was still a two person job.  The fan motor had a cable attached that hung from a hook in the electrical box.  Theoretically so that you could have two hands free to attach with wires without struggling to hold the fan motor up.  The only thing was that the wires weren't long enough to reach, so one of us held it up the motor while the other attached.  Also, since we didn't have a separate switch for the fan and light, the two wires had to be joined together with the power from the electrical box, and the marrettes were only big enough to screw over two wires, not three.  Our first trip to the hardware store.

Geez, I can never make a long story short, but we did get the job finished, the lights come on, the fan goes round and it actually looks pretty good up there. 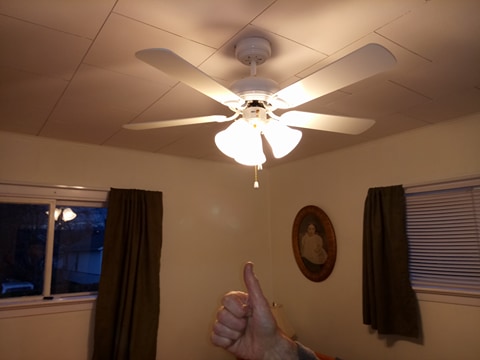 The bathroom at Wyndson Cottage is about as tiny as it can get.  It's fine with me, I'm used to tiny bathrooms.  The sink is right inside the door along the longest wall, the toilet right next to it and the bathtub across the end of the room.   The sink was an old style wall hung one, maybe original as well.  I think Larry thought it was just fine, and it did the job, but it was kind of low, and I wanted update it and gain a bit of storage underneath it. 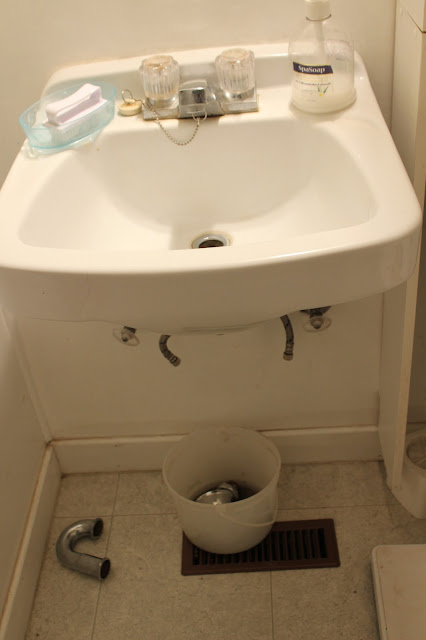 This was 99% my project. I was very pleased that the drain pipe came undone nicely and with no trouble.  I thought I might have to wait until the next trip when we could bring some more tools, but a large pair of slip joint pliers worked to get it all apart.

The old wall was some ugly mustard coloured fake tile stuff.  Thankfully it has all been painted over white. 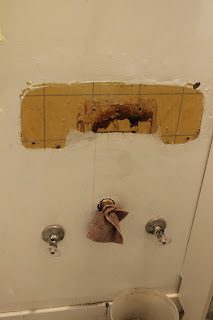 I had found the sink, taps and vanity on Craigslist for $50.  Because the new sink was wider and higher, I needed a longer pipe to be able to reach the drain pipe in the wall.  Back to the hardware store.  Oh they had the right part, but it came in a package with the trap for under the sink, and I didn't need that, and I didn't want to pay $30 for the whole set.  The guy at the store and I couldn't find anything else to work, so I left and we were going to head to the building supply down the highway, but made a stop at Canadian Tire first.  I was rooting around in a bin of random plumbing stuff, much of it taped up because it had been bought and then returned, and managed to find the right pipe for $12.  Still expensive for what it was, but I bought it.  Back home I got it all put together and then realized that because the sink was now higher, the straight piece between the sink and the trap wasn't long enough.  Back to the hardware store.  Thankfully they had an extension, $8.  Back I went, figuring this was it.  Put all the pipes together, turned on the water, and it was leaking all over the place under the sink. Ugh! Realized I had one washer on wrong, fixed that, but then realized I was missing a washer.  Back to the hardware store again, a pack of two washers for $2.  Took the whole thing apart again for the umpteenth time, and finally this time I had success.!

Running water, and it's not running all over the floor!

As I was proof reading I see I forgot to mention that the vanity sat over the heat register. I got a plastic bin from Dollarama, cut it to fit and direct the heat to holes that I drilled in the base of the vanity that are out of sight under the door jut out. 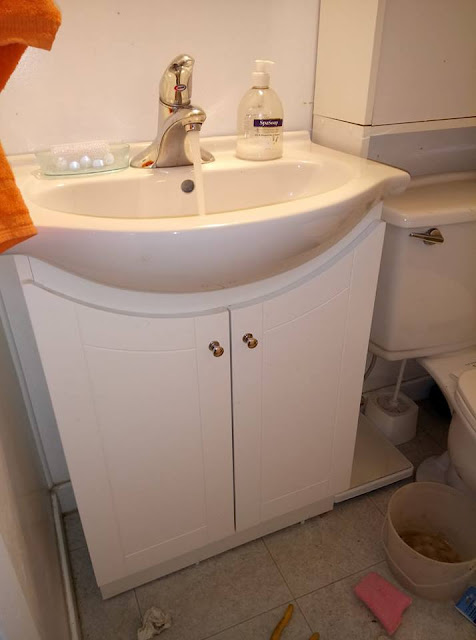 Funny how the whites don't look very white in the picture!

I'm sure you found that all very boring!
Just be glad that I'm not giving you all the details about this project, because it didn't get done.
Next time! 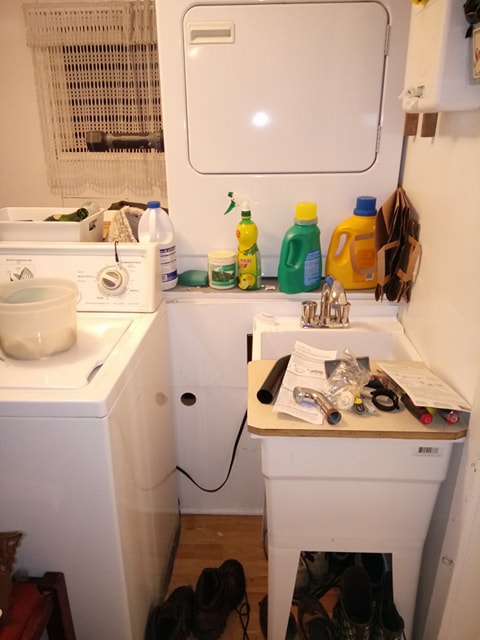 So here's a few pretty pictures.  We did loads of walking, longer walks in the morning than we usually do.  It was cool so that makes us feel more energetic.
We only had one really nice sunny day.  I think we went for a bike ride that day too. 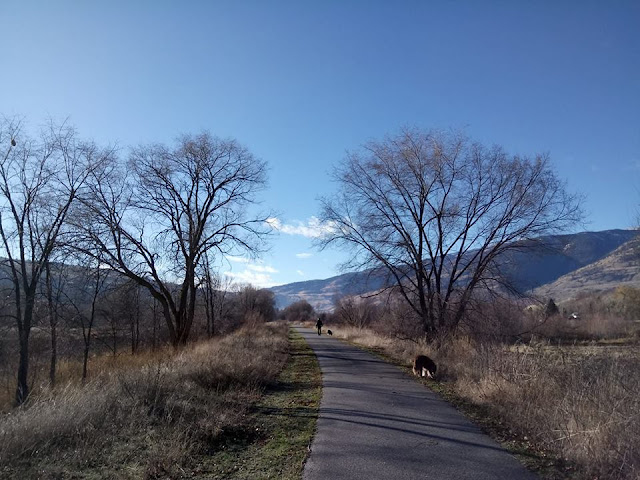 And then the next day was cold and kind of miserable.  Rainy on this walk, and walking into the rain and wind on the way back. It was miserable, we couldn't get back to the car fast enough in my opinion.
We had to be impressed by this beaver though. He has big dreams! 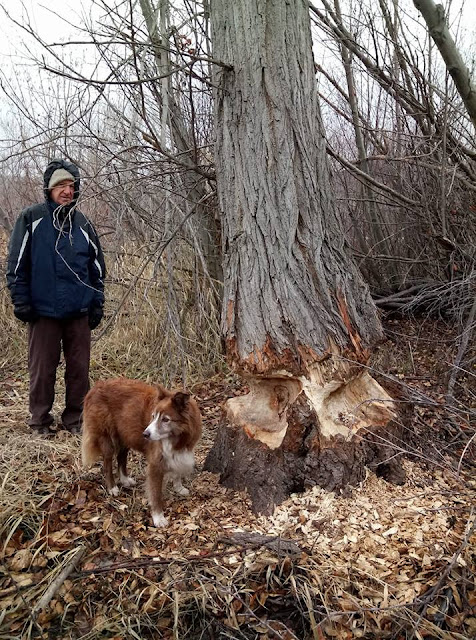 Usually we walked the dogs along the river, but one morning we went up the hill. The deer watched us the whole time.  I only had my phone and it was on maximum zoom here, hence the blurriness. 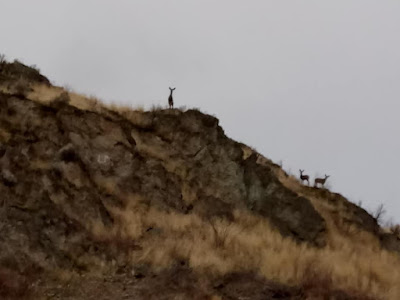 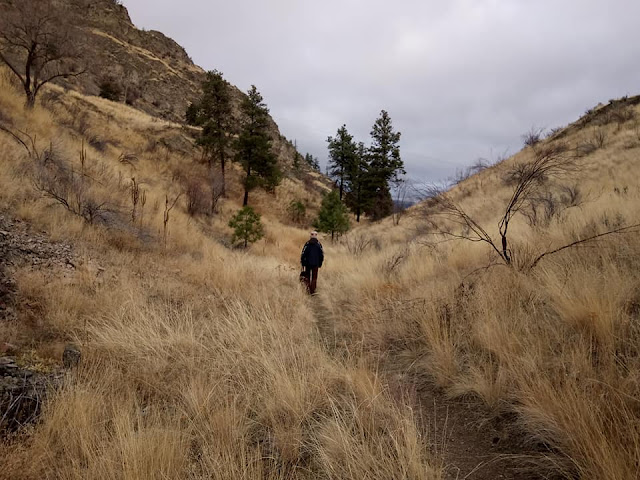 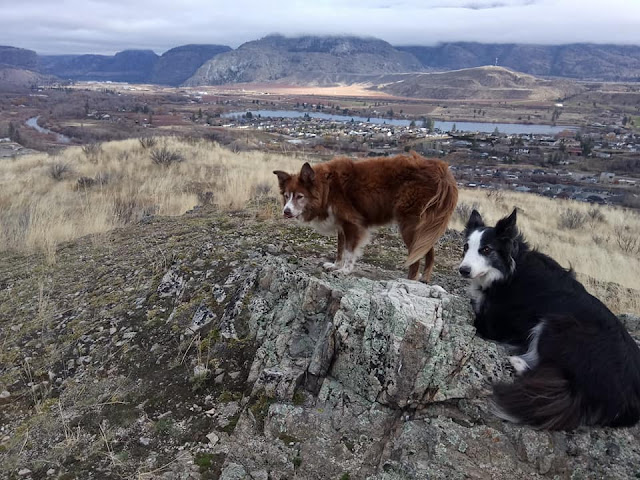 It's always fun to look down on the town and pick out our little house. 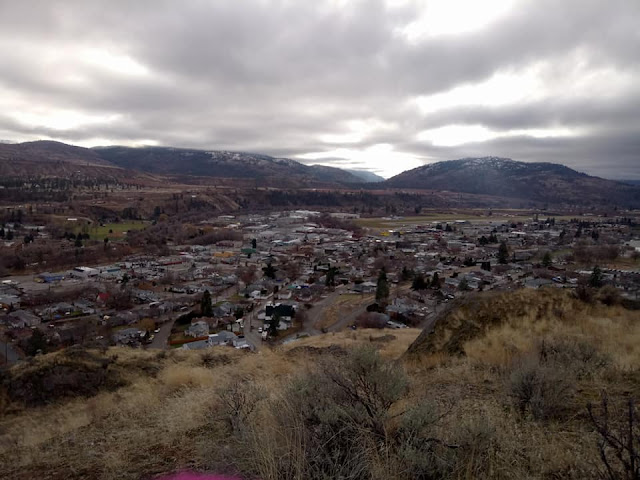 I had also taken to Oliver a huge flat of tomatoes that had ripened here in the family room and needed cooking up into sauce.  Got that all done and into containers in the freezer.  Garlic got planted in the garden, 150 cloves, and all covered over with garbage cans of mulch we had taken up.  I took a lot of fabric to sew into aprons, but only got a half dozen or so cut out.  I had also taken a couple of window screens to cut down to size and fit into the windows, but that's a job for another visit.

Oh yes, Larry fastened the cover up for the 'through the wall' air conditioner for the winter.  I think he made a batch of muffins too!😆

Geez, it sounds like I'm doing a lot of patting my own back here.
Oh well, I do like to work on projects.
I wish I was as enthusiastic about projects here at home.
Posted by Karen at 11:13 PM