So last week, the one right after the last market, started out pretty well.  Still sunny and mild.  White Rock had set a record for the warmest October 29th but it looked pretty ominous for later in the week, and there was actually snow in the forecast! That meant that we needed to get to work.

First thing was to harvest the rest of the squash.  Those all got taken upstairs and are stuck in the windows facing south, trying to colour up some of the light spots on them still.  I guess to cure them a bit.  Not all fit in the windows so some are just on the floor against the wall.  Sort of out of the way.  I was a bit disappointed at the small amount I managed to sell at the market.  Oh well, we can eat them or the chickens will.  Nothing goes to waste when you have chickens. Huh, I just glanced over at them decorating the windowsill, and that green one in the cart is much more orange now. 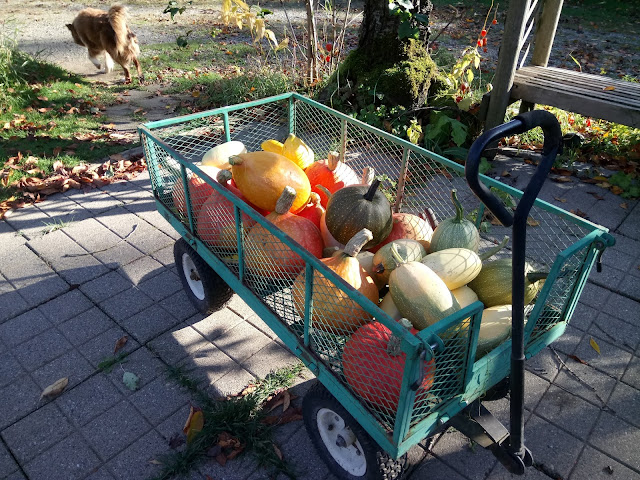 Once we had the cart emptied it was time to go and rake leaves.   On that windy market day, we arrived home to find just about all the leaves off our two Big Leaf Maples along the driveway were now on the driveway.  It was very pretty, I should have taken a picture.  All yellow and dry and crunchy.  We don't often have crunchy leaves, not for long at least.  How nice it would be to get them all picked up while they were still dry instead of having to pick up soggy piles like is often the case.  It took a bit off effort  to pack them into the wagon.  I was out there by myself for a while, and I got one my knees and 'walked' around on the leaves to pack them down.  Then Larry showed up and offered to help!  Jake thought that was so great, and kept throwing the ball onto Larry's legs 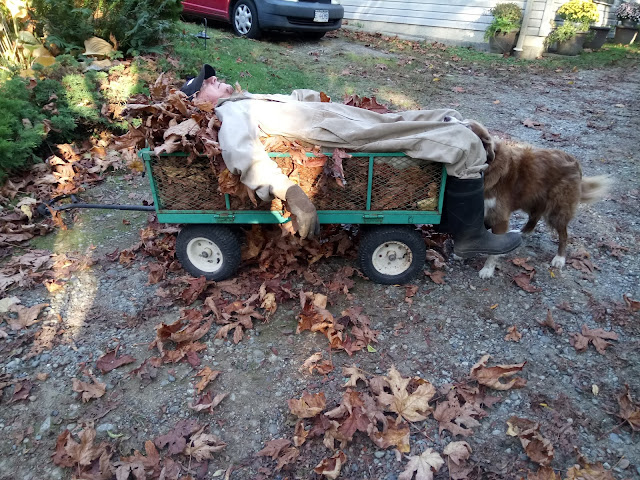 I think the leaves were done by Tuesday morning, all spread through the two raspberry rows to mulch them. 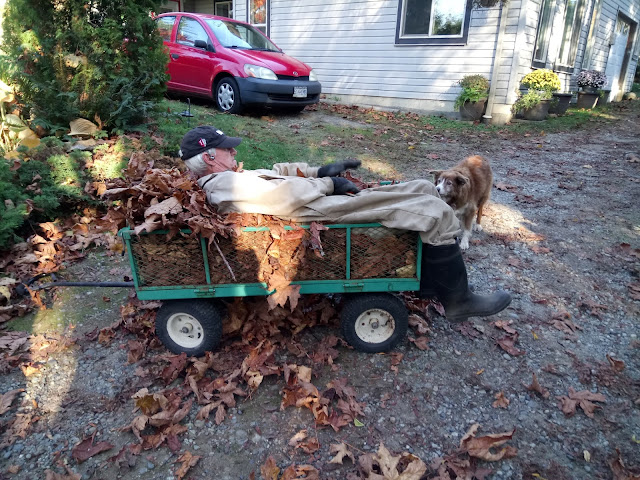 Then it was time for the dahlias.  Darn, I found a bucket I had picked on the Saturday, and then had got forgotten. 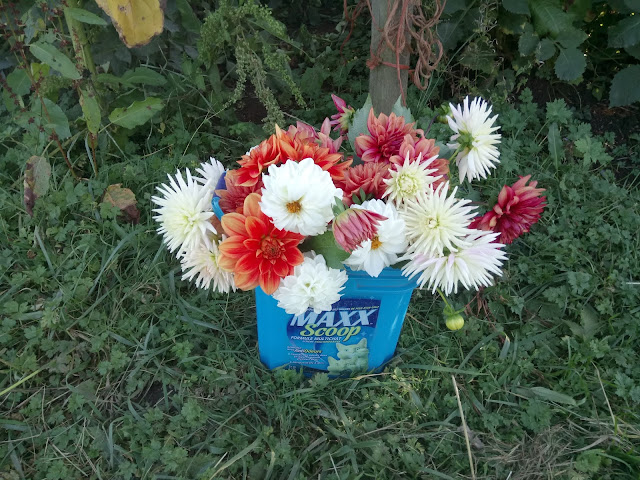 It took me a good chunk of time, spread over three days, to get all the dahlias dug out.  Just over 100 of them. Some of those tubers are massive. There were a few steps to the process.  First to cut the huge amount of foliage off.  Then to dig them up, leaving them on the ground in the same order in the row.  Then I had to make sure they were all labelled according to my list.  I made a list of what each one was as I planted it, and it was also tagged.  Then a few weeks ago I had compared my list to what had actually come up and what the flowers looked like.  So now that the tubers were out of the ground I had to make sure there was the appropriate tag on them.  The tags are just flagging tape tied around the stem stubs with my letter codes written on with a permanent marker.  The tag they were planted with is often stuck in the middle of the tubers that have grown around it.  Most of them got retagged.  Larry loaded them into the wagon and a few different wheelbarrows and took them down to the barn . 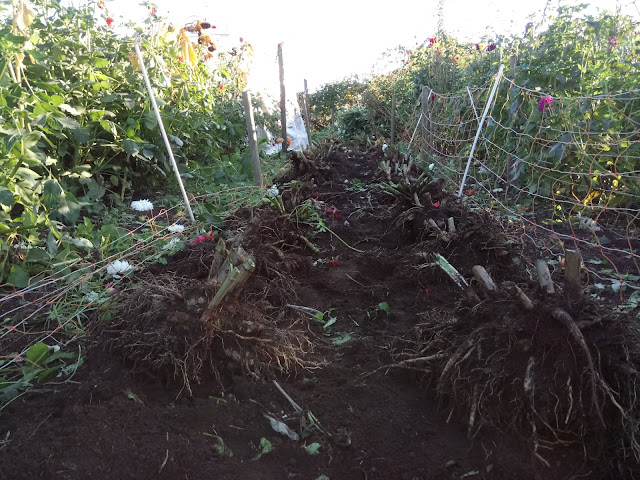 It was nice to be able to get them all dug out before the ground got saturated and too cold.  Previously I had stored them in feed bags in the garage, but this year there are just too many.  So I've given them a gentle blast with compressed air to get most of the extra soil off them, and then they are being packed into large plastic barrels, surrounded by wood shavings.  The tops of the barrels will just be covered in wire to keep the rodents out. The shavings are loose enough that air circulation shouldn't be a problem (fingers crossed!!). I guess I'll find out next April. 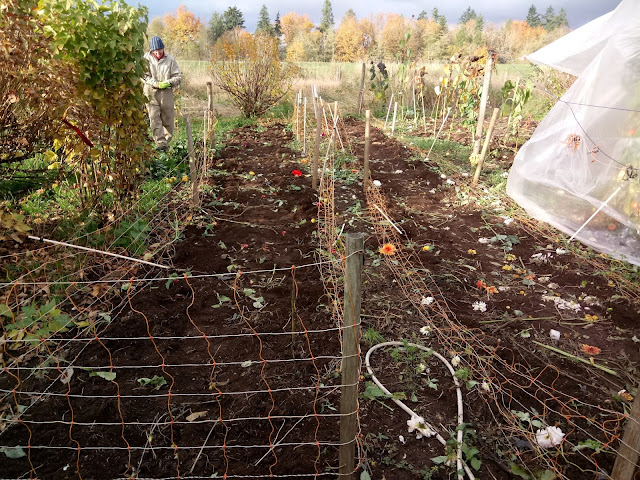 Then next step was to move the massive piles of foliage to the compost pile before they got wet.  The pile was close by so I just grabbed armfuls and carried them over.

So it is now Thursday morning and snow is expected that afternoon evening, and the tomatoes need to be all picked out of the Ticky Tacky Redneck greenhouse.  We had got all the tomatoes picked in the morning, three big flats of ripe, ripening, and green tomatoes.  That was in addition to two flats picked a couple of weeks earlier.

And sure enough the snow started that afternoon. 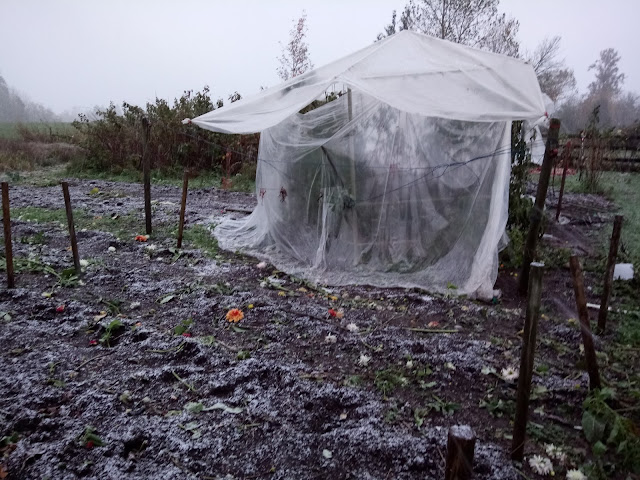 I went back out there to rip all the plants out before they froze and got all gross and mushy, and got them on the pile too. 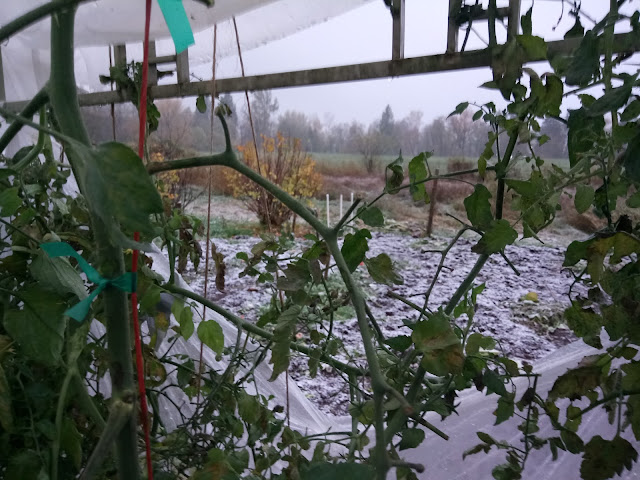 And the next morning we woke up to an inch of snow.  Not so much in the trees. 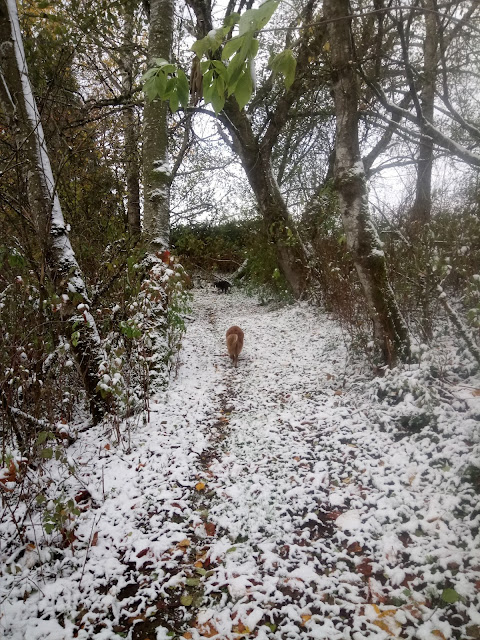 But a bit more in the open.  We got off lightly compared to some areas. 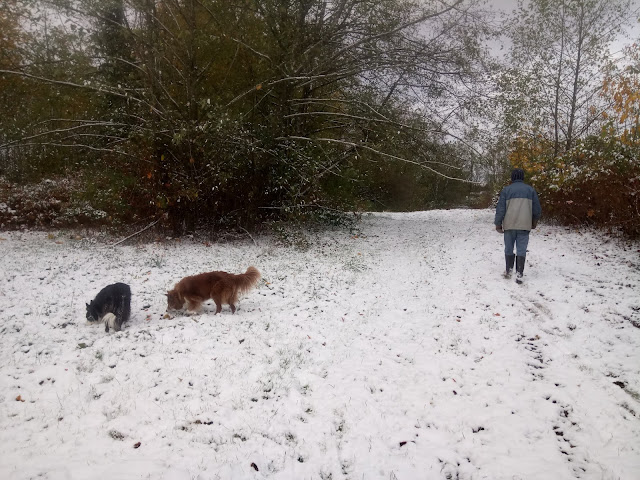 Yesterday I cooked up a big pot of tomato sauce and grated the last zucchini and scallopini squash into it.

One of this year's successes.  Watermelon!
Picked a few weeks ago and stored in the garage, and then cut open on Saturday when a few more flakes floated down.  Not quite as sweet as a mid summer watermelon, but pretty good all the same! 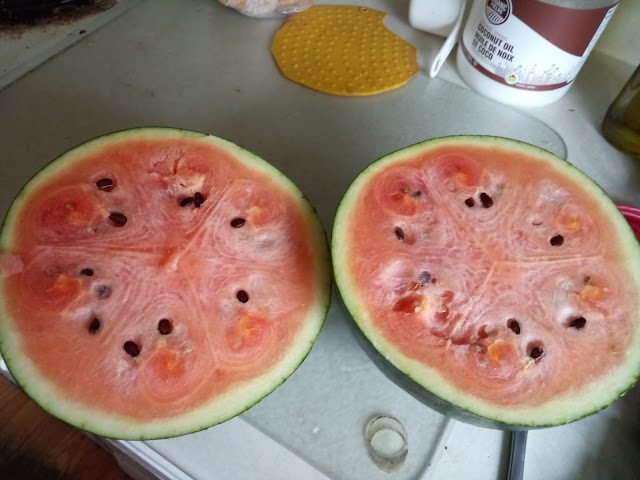 Oops.
I've just eaten too much of that watery watermelon too close to bedtime.
I'm sure you know what that means.
Posted by Karen at 10:42 PM