Can You Believe It?

A post three nights in a row?  I may have not accomplished much else this week, but I least I can say I didn't abandon my blog.  Why I feel like I haven't done much is because I have not made a lick of jam.  I have people waiting for specific ones.  I feel guilty, I should have had 6 or 8 or more batches done by this point.  I guess I can say I had a rest this week, although it doesn't actually feel like it.

We are so swamped with pears at the moment.  We've been taking them to the market to sell, and we sell a few, but not enough.  I hate to waste any.  Jake and Luna are doing their part and eating a lot of the windfalls.  The ones that are too far gone go over the fence to the sheep and chickens.  Today I peeled about 40 lbs of pears and got 5 bags of 8-9 cups each of diced pears into the freezer for future batches of ginger pear jam. The chickens and Ramona got the peels and cores. There are still pears on the tree, and about 100 lbs in the fridge in the garage.  My next plan is to peel and cut up some to freeze on trays first, and then bag.  We will used them in the winter for putting on our porridge.

Last week at the market I noticed the vendor next to us had bags of dried fruit.  I talked to him (they send massive amounts to the commercial dehydrators) and asked a few questions.  Today I remembered to check in the barn and there was the dehydrator that wasn't in the other places I thought it might be.  It always a challenge to remember where you saw something last.  I got it from the thrift store or a garage sale, (where else?), and wouldn't have paid more than $5.  I don't think I've really used it, other than one time drying a few herbs.  I plugged it in and there was smoke coming out of it ;(  Not a good sign at all!  I managed to get it apart and vacuumed the dead bugs out of it and cleaned all around the element.  Larry washed the trays and I got it all back together, and hooray, it was good to go!  I took some of the red apples we have that are supposed to be Gravensteins, and cored them and sliced them and filled up the dehydrator. It has four layers. 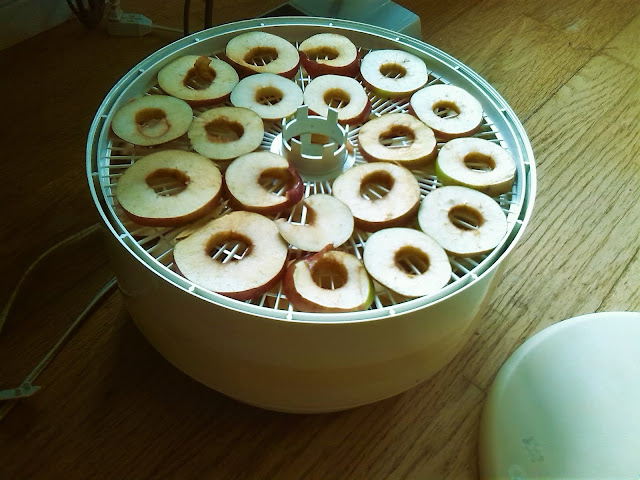 Eight hours later, we have dried apples.  I'm so thrilled.  They just look like the real thing, haha!  And they taste delicious, oh are they good!.  I did a couple of pear slices too and they were great also, so my next batch will be pears.  And I was excited enough to order 4 more trays from Amazon this evening.  If the thing is going to be running, it might as well be as full as possible. 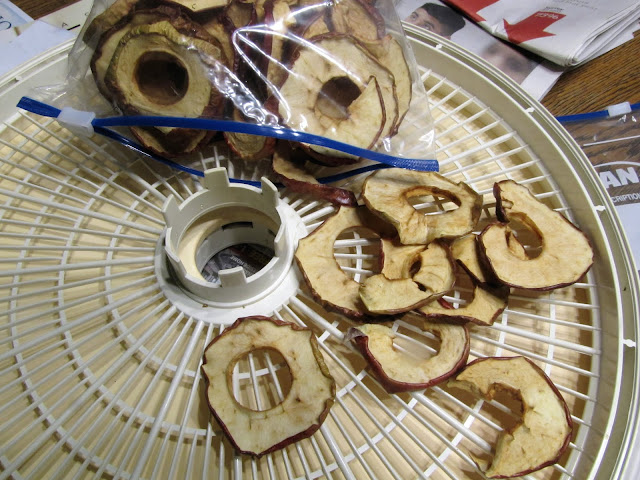 About lunchtime as I was taking the apple cores out to the chickens, I noticed that their door was closed, again.  I went over there and the hook that Meredith had put in was straightened right out, and so then it had slid out of the wire loop and dropped down.  The poor hens.  There was a whole bunch that were wanting to get in to lay.  Right outside the door down the side of a hunk of concrete that is there, about 6 hens were piled on top of each other.  I couldn't figure out what the heck they were doing, and thought the hen at the bottom of the pile was going to be smothered.  There was one egg at the very bottom.  So I realized that one hen had laid there in desperation, so then 5 or 6 more hens figured they would all try lay there too, all at the same time.  Poor things.  Into the coop they shot, and piled into the nest boxes.  We were down a few eggs when Larry collected them later, so some desperate hens probably dropped them somewhere else.

I got the drill and changed the hinges so  that the door would open right up, and used a hook and eye to keep it fastened close to the wall, so it doesn't look so much like a scratching post to Ramona.  So much for my great idea of letting it hang low over the doorway like a little roof.  Hopefully that has solved it all.

The before picture.  Now it is opened right up and fastened against the wall. 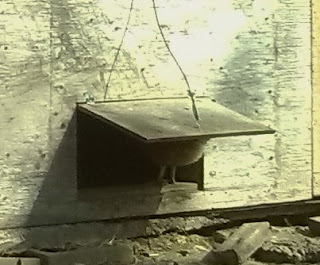 I was reminded of how I like little jobs like that. Fiddling around. Going and looking for things that will make it work.  I usually don't know what I am looking for until I see it, but I love the challenge of making things work out from the 'junk' we have on hand. Larry came out to see what I was doing.  I was rude and told him to get lost!  I didn't want him saying 'why don't you do it this way'.  Sometimes I just like to struggle along by myself and then feel a great satisfaction with the results.

A garage sale score from a couple of weeks ago. 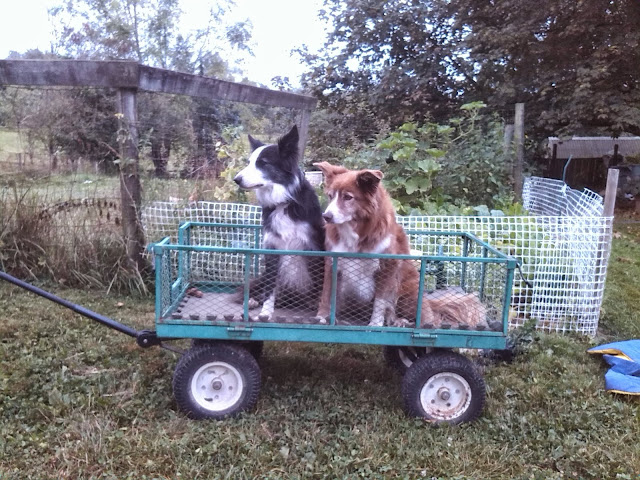 Jake and Luna were not impressed.  They leaped out in unison seconds after this photo.
Maybe I need to train them to pull it instead!
.
Posted by Karen at 10:23 PM