Just a quick post.  This past weekend was my dog club's annual Agility Trial.  We haven't done a whole lot of agility lately, and last year I didn't even enter the trial.  This year I thought I might as well have a bit of fun...(because with our lack of practicing I really didn't think we would do that well).

The trial was held Friday evening through Sunday, but I couldn't be there on Sunday because I needed to be at the Farmer's Market. 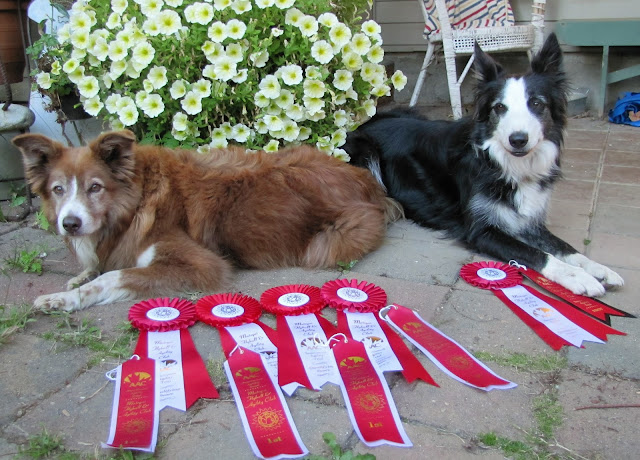 Once again our dogs amazed me.  Jake ran in 5 classes, and had a clean and qualifying round in four of them, as well as first place finishes.  The fifth class with it's fault was due to a small handler error.  I learned from my mistake and when I ran Luna in the same class a bit later, I fixed my handling and she got a clean (qualifying) round and a second place.  In her other classes she made one small mistake in each of them, which was my fault.  I was so darn impressed and pleased with them!

I didn't get anyone to film our runs, but here are a couple of videos to give you some idea.  The first one is of our club doing a demo at a Canada Day celebration in Mission.  We go there every year.  It was a fun relay where the handler had to run their dog and carry a cup of water at the same time.

This video is of Jake running in the BC/Yukon Agility Regionals in 2011.  This is one of 6 different runs we had to do. He finished first in his division that year.

I had so much fun,  think I may have to enter a few trials this winter!