Every year the care home where my mother lives puts on a special dinner before Christmas.  Family members are invited, at $25 per ticket.   The picture below is my mum at her first one, four years ago.  It's a nice picture of her. 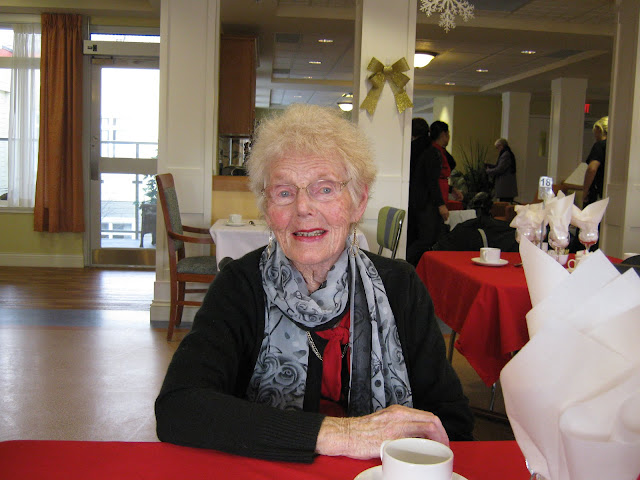 In four years a lot has changed.  My mum fell and broke her hip just before Christmas last year, so she spent Christmas in the hospital.  She wasn't bothered about me coming to the dinner that year, but then afterwards talked about how other residents had family members there, and she didn't... so I vowed that I would be there this year.  There has been a couple of times since the hip replacement that my mum has gone into a decline, and we did not expect her to come out of it.  But come out of it she did, twice. Not quite to the level she was before though.  Just recently she was having to be fed, and was on minced food.  About a week ago she was getting very upset that she wasn't getting 'real' food and tried to stab one of the care aides' hand with a fork.  I had to sign paperwork that I agreed that she could have solid food, even though she was still considered at risk to choke.
At the dinner, I was discreetly trying to help her eat.  She only has one functioning hand, due to the stroke that put her in the care home in the first place. She wouldn't let me cut her food into manageable pieces, and made a threatening move at my hand one time.  I was trying to be discreet , and not have my mum create a scene.  I don't think she got much food into her.  She was very meticulous about picking the crumbs off the table at the end of the meal though;-) 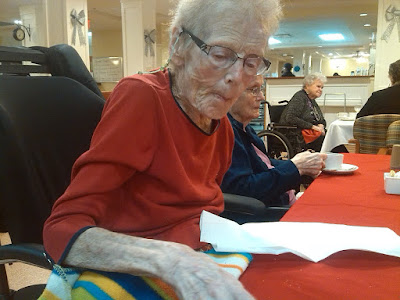 Afterwards, at the other side of the dining room, there was some entertainment.  I've seen this couple perform before at the care home. They are called 'The Suede Dogs', Malcolm and Linda. They are good, singing a lot of old songs, and they get out there and work the audience.  Malcolm came over and took my mum's hand and sang right to her.  The rest of the time my mum played the part of conductor. 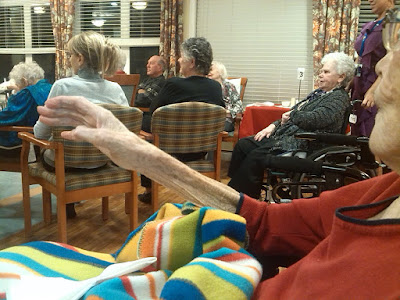 She obviously enjoyed the music, keeping time with every song.  Even when I thought she had fallen asleep, her eyes closed and her head tipped back, she was still nodding to the music. It was kind of cute:)

After it was all over, and we passed the nurse on the way back to her room, she commented that she was surprised my mum was still awake.  Back in her room I asked her if she wanted the TV on.  She seemed to be okay with that, and then she just angrily told me to 'Go, Well GO THEN'.  I kissed her goodbye and headed on home.  For the longest time the anger I would get from her would be upsetting, but now I'm able to just let it slip away.
That visit was about as good as it gets these days.